Accessibility links
A Potential Act Of Terrorism Tests A President — And Americans' Nerves As the U.S. investigates a shooting in California as "an act of terrorism," President Obama will address the nation Sunday night in what will be just his third speech from the Oval Office.

A Potential Act Of Terrorism Tests A President — And Americans' Nerves

A Potential Act Of Terrorism Tests A President — And Americans' Nerves 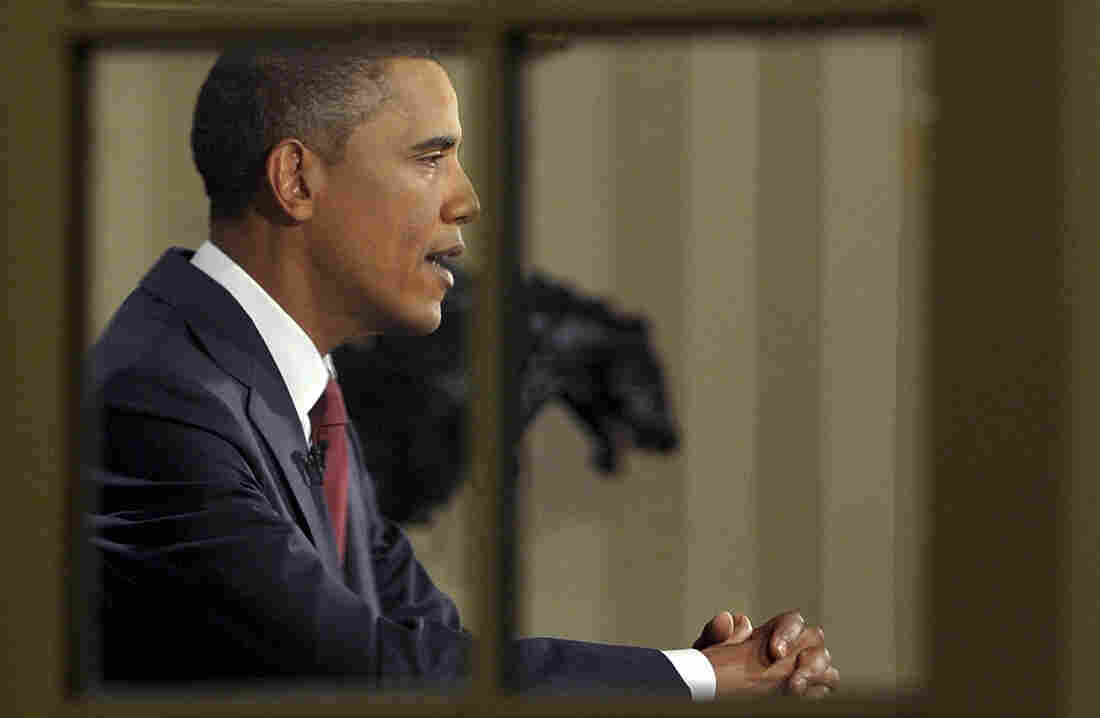 President Obama, photographed from the Rose Garden, delivers a prime-time televised address marking the the end of combat mission in Iraq from the Oval Office in 2010. Susan Walsh/AP hide caption 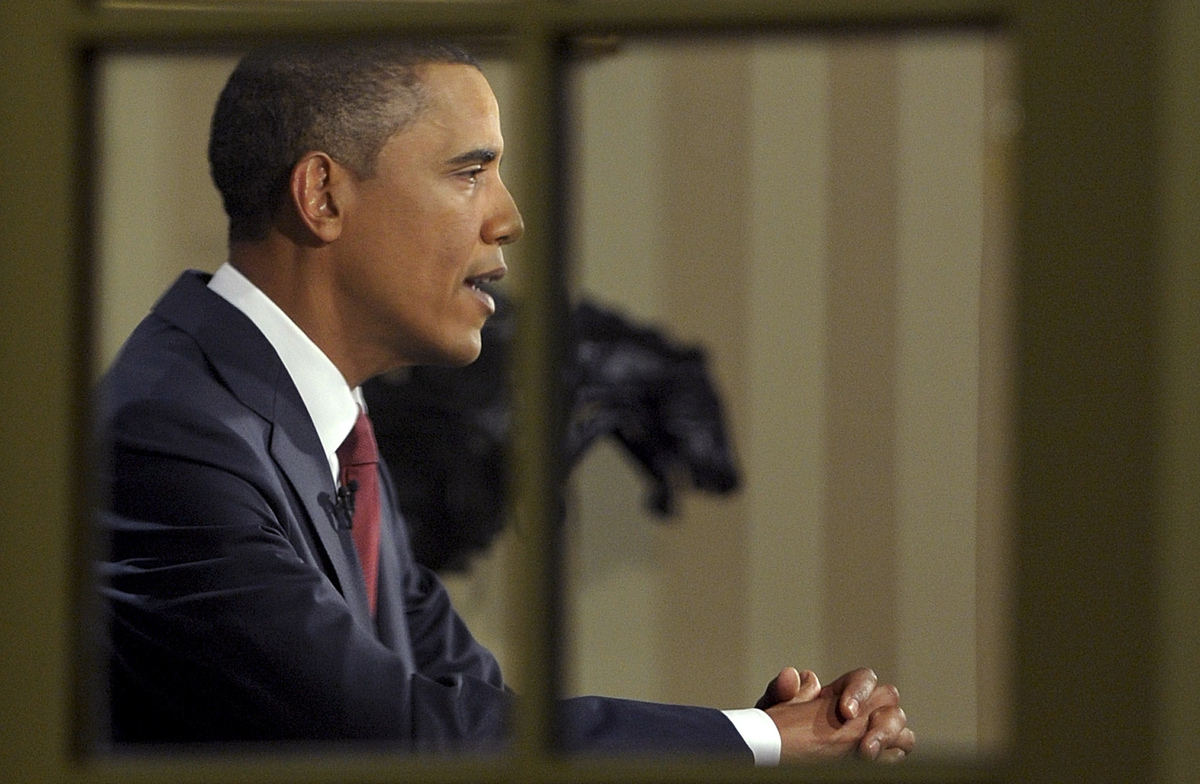 President Obama, photographed from the Rose Garden, delivers a prime-time televised address marking the the end of combat mission in Iraq from the Oval Office in 2010.

Inevitably, as news breaks of yet another international or domestic event — an explosion in Texas, a train derailment outside Philadelphia, a Molotov cocktail thrown into a nightclub in Egypt, a shooting in Colorado or California — there's one question never far from Americans' lips: "Is it terrorism?"

Even many who don't want to generalize wonder, "What do we know about the shooter — was he or she Muslim?"

This is reality after the Sept. 11th attacks. Thousands of Americans, a decade after 9/11, were still suffering from post-traumatic stress disorder because of that date. And every time there's word of yet another shooting, even for those who have never been diagnosed with PTSD, there are flashbacks.

It's with this tense background — not long after 130 were killed in Paris and 14 were killed in San Bernardino, Calif., in which a married Muslim couple, who the FBI believes were potentially inspired by ISIS — that President Obama will address the country from the Oval Office Sunday night to try and calm nerves.

Underscoring its importance, this will be just Obama's third Oval Office address. The other two were about the Deepwater Horizon oil spill in the Gulf of Mexico and the end of combat operations in Iraq, both in 2010. Obama has addressed the nation several times since then, but has preferred other backdrops like the White House East Room where he announced the death of Osama Bin Laden in 2011.

Sundays in America mean church and professional football. Obama will squeeze in his address — expected to last between just 10 and 15 minutes, according to White House staff — between games. The president's speech is scheduled to begin soon after 8 p.m. EST, which is sandwiched right between the late afternoon slate of football games, which end around 7:30 p.m. EST, and Sunday Night Football beginning at 8:30 p.m. EST between the Indianapolis Colts and Pittsburgh Steelers.

Obama, who refers to ISIS as ISIL, will talk "about the steps our government is taking" to make sure the homeland is safe, according to a statement released Saturday night from White House Press Secretary Josh Earnest. The president will "update" on the investigation in San Bernardino, and he "will also discuss the broader threat of terrorism, including the nature of the threat, how it has evolved, and how we will defeat it," per the statement.

"He will reiterate his firm conviction that ISIL will be destroyed and that the United States must draw upon our values — our unwavering commitment to justice, equality and freedom — to prevail over terrorist groups that use violence to advance a destructive ideology."

But the speech also comes at a time when Obama needs to show leadership on terrorism. His numbers on handling of foreign policy and ISIS and terrorism, specifically, have plummeted since ISIS' rise last year. Immediately following the Paris attacks, Obama seemed all-too-eager to wade into domestic politics and the 2016 Republican primary race.

"When I hear folks say that maybe we should just admit the Christians but not the Muslims," Obama said, "when I hear political leaders suggesting that there would be a religious test for which person who is fleeing from a war-torn country is admitted, when some of those folks themselves come from families who benefited from protection when they were fleeing political persecution, that's shameful. That's not American. That's not who we are."

And following the shootings in California, which came days after another shooting at a Planned Parenthood clinic in Colorado, Obama's immediate response was to focus on guns — like this was a typical mass shooting.

"The one thing we do know is that we have a pattern now of mass shootings in this country that has no parallel anywhere else in the world," Obama told CBS Wednesday. "We should never that think this is something that just happens in the ordinary course of events, because it doesn't happen with the same frequency in other countries."

His response evolved, however, as details of the shooters began to emerge.

But just over 24 hours later, the FBI announced it was officially investigating the shooting as a terrorism case.

"There's a number of pieces of evidence which has essentially pushed us off the cliff to say we are considering this an act of terrorism," said David Bowdich, the FBI agent in charge of the Los Angeles office.

NPR's Carrie Johnson reported that one of the shooters, Tashfeen Malik, pledged allegiance to ISIS on a Facebook page. ISIS said in a radio broadcast that two of its "followers" had carried out the attack. And while officials have said there were contacts between the shooters and some on the U.S. government's international radar, there's no evidence that the attacks were part of a coordinated international plot.

"There's no indication that they are part of a network," FBI Director James Comey said at a news conference Friday, noting that the husband-and-wife duo had been apparently self-radicalized.

What seemed like yet another mass shooting — the deadliest in America in about three years, since the killings at an elementary school in Connecticut — "turned into a global investigation into the deadliest terrorist assault in the United States since the Sept. 11, 2001...," the New York Times points out. (Thirteen people were killed in the 2009 Fort Hood shootings.)

That requires a president to be out front. With even more known, expect Obama Sunday night to be more definitive than he's been. Obama's job is to reassure that he and the federal government are doing everything they can to keep the country safe. He will likely talk about American ideals in that pursuit, but given the expected brevity of the speech, don't expect it to go too far beyond the facts.

This attack means, according to data maintained by the New America Foundation, 45 people have been killed by "homegrown extremists" since 9/11 — three fewer than the 48, who have been killed by "deadly right-wing attacks," which the New York Times describes as "antigovernment, racist and other nonjihadist extremists."

Paris and San Bernardino have thrust international terrorism to the forefront of the 2016 presidential election. Republican voters have seen it as a top issue for almost a year, pushing aside discussions of privacy after the Edward Snowden revelations.

Ted Cruz on Thursday, before knowing all the details of the San Bernardino shooting, said it's possible it was "radical Islamic terrorism here at home" and means "we are at a time of war."

It's the kind of conviction that is playing well in the GOP primary and moving the foreign-policy needle in Republicans' direction.

Democrats worry that negative perceptions of Obama's handling of foreign policy could hamstring their chances of holding onto the White House. It's one reason Hillary Clinton, the leading candidate on the Democratic side, was quick to say Thursday night — hours after Cruz and before the FBI — that it was "becoming clear" San Bernardino was "an act of terrorism."

It's those threats of another international plot, of another 9/11, that trigger Americans' worst fears.