Accessibility links
6 Times Obama Called On Muslim Communities To Do More About Extremism Conservatives criticize the president's language on terrorism, including his approach to Muslim nations and communities. But Obama has, on several occasions, pointed to Muslim leaders to do more. 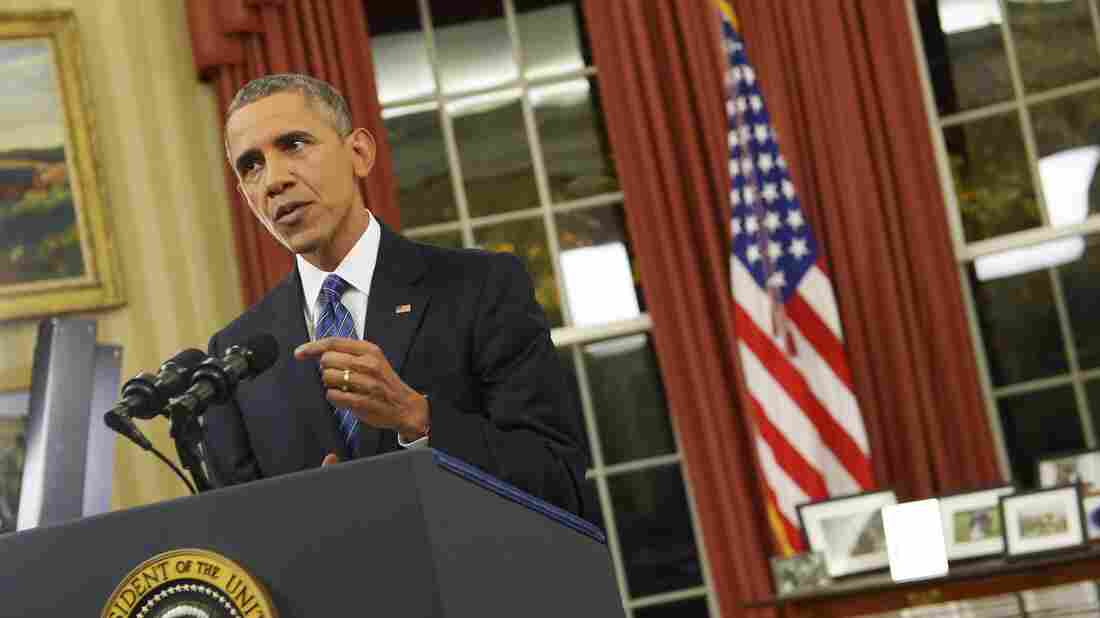 President Obama speaks during an address to the nation from the Oval Office of the White House. Getty Images hide caption 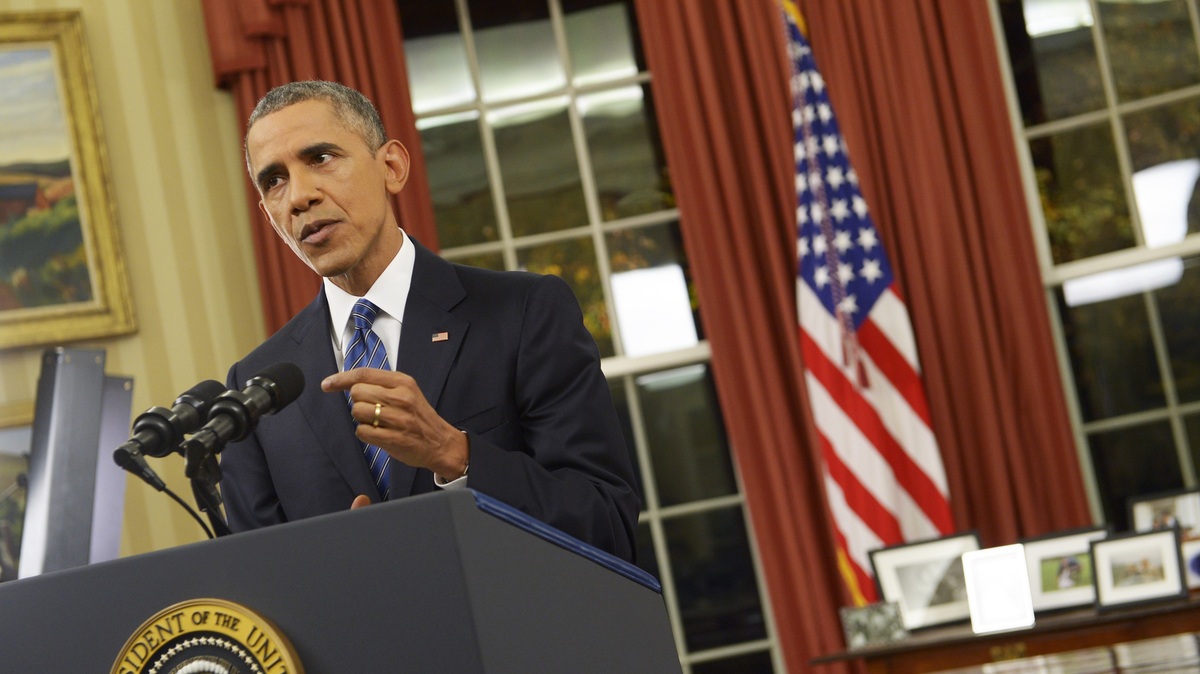 President Obama speaks during an address to the nation from the Oval Office of the White House.

President Obama's rhetoric is a familiar punching bag for Republicans running to replace him. In particular, they focus on his reluctance to say the phrase "radical Islamic terrorism."

It's meant as a way to cast doubt on whether the president takes the threat of international terrorism seriously, specifically terrorism carried out by radicalized Muslims. The implication more broadly is that Obama is "anti-American" and "pro-Islamic," as a retired admiral flat-out said earlier this year.

Obama rejects that. He explained his reasoning for not using the phrase "radical Islam" in February at a White House conference on combating violent extremism, pointing out, "They are not religious leaders; they are terrorists. We are not at war with Islam. We are at war with people who have perverted Islam."

He also notes that drawing a dividing line between Muslims and other Americans plays into the messaging and recruitment efforts of terrorist groups like ISIS.

The truth is, however, even though Obama rejects profiling — or doing things like keeping a database of Muslims, as Donald Trump suggests — this president has put the onus on Muslim leaders and Muslim communities to fight attempts at radicalization.

He did so in his address Sunday night. "...[I]t is the responsibility of Muslims around the world to root out misguided ideas that lead to radicalization...," the president said before calling on "all Americans ... to reject discrimination."

With this president it's often the latter part that gets the most attention. Florida Sen. Marco Rubio, a leading GOP presidential contender, accused Obama of bringing up a problem that doesn't exist when it comes to discrimination.

Obama has been talking about Muslim responsibility in the fight against terrorism for a while. See this: https://t.co/zKJIGWLpqq

Here are half a dozen times he's done so in his presidency, including five times since Sept. 2014 (bolding is ours):

"...We cannot turn against one another by letting this fight be defined as a war between America and Islam. That, too, is what groups like ISIL want. ISIL does not speak for Islam. They are thugs and killers, part of a cult of death, and they account for a tiny fraction of more than a billion Muslims around the world - including millions of patriotic Muslim Americans who reject their hateful ideology. Moreover, the vast majority of victims around the world are Muslim. If we're to succeed in defeating terrorism we must enlist Muslim communities as some of our strongest allies, rather than push them away through suspicion and hate. That does not mean denying the fact that an extremist ideology has spread within some Muslim communities. This is a real problem that Muslims must confront, without excuse. Muslim leaders here and around the globe have to continue working with us to decisively and unequivocally reject the hateful ideology that groups like ISIL and al Qaeda promote; to speak out against not just acts of violence, but also those interpretations of Islam that are incompatible with the values of religious tolerance, mutual respect, and human dignity."

"To the degree that anyone would equate the terrible actions that took place in Paris with the views of Islam, those kinds of stereotypes are counterproductive. They're wrong. They will lead, I think, to greater recruitment into terrorist organizations over time if this becomes somehow defined as a Muslim problem as opposed to a terrorist problem.

"Now, what is also true, is that the most vicious terrorist organizations at the moment are ones that claim to be speaking on behalf of true Muslims. And I do think that Muslims around the world - religious leaders, political leaders, ordinary people, have to ask very serious questions about how did these extremist ideologies take root, even if it's only affecting a very small fraction of the population. It is real and it is dangerous. And it has built up over time, and with social media it has now accelerated.

"And so I think, on the one hand, non-Muslims cannot stereotype, but I also think the Muslim community has to think about how we make sure that children are not being infected with this twisted notion that somehow they can kill innocent people and that that is justified by religion. And to some degree, that is something that has to come from within the Muslim community itself. And I think there have been times where there has not been enough pushback against extremism."

"...Part of our job, together, is to work to reject such extremism that infects too many of our young people. Part of that effort must a continued rejection by Muslims of those who distort Islam to preach intolerance and promote violence, and it must also a rejection by non-Muslims of the ignorance that equates Islam with terror."

"...Now, just as those of us outside Muslim communities need to reject the terrorist narrative that the West and Islam are in conflict, or modern life and Islam are in conflict, I also believe that Muslim communities have a responsibility as well. Al Qaeda and ISIL do draw, selectively, from the Islamic texts. They do depend upon the misperception around the world that they speak in some fashion for people of the Muslim faith, that Islam is somehow inherently violent, that there is some sort of clash of civilizations....If we are going to effectively isolate terrorists, if we're going to address the challenge of their efforts to recruit our young people, if we're going to lift up the voices of intolerance and pluralism within the Muslim community, then we've got to acknowledge that their job is made harder by a broader narrative that does exist in many Muslim communities around the world that suggests the West is at odds with Islam in some fashion...So just as leaders like myself reject the notion that terrorists like ISIL genuinely represent Islam, Muslim leaders need to do more to discredit the notion that our nations are determined to suppress Islam, that there's an inherent clash in civilizations. Everybody has to speak up very clearly that no matter what the grievance, violence against innocents doesn't defend Islam or Muslims, it damages Islam and Muslims."

"...It is time for the world — especially Muslim communities — to explicitly, forcefully, and consistently reject the ideology of organizations like al Qaeda and ISIL. It is one of the tasks of all great religions to accommodate devout faith with a modern, multicultural world. No children are born hating, and no children --anywhere--should be educated to hate other people. There should be no more tolerance of so-called clerics who call upon people to harm innocents because they're Jewish, or because they're Christian, or because they're Muslim. It is time for a new compact among the civilized peoples of this world to eradicate war at its most fundamental source, and that is the corruption of young minds by violent ideology.

"...The countries of the Arab and Muslim world must focus on the extraordinary potential of their people — especially the youth. And here I'd like to speak directly to young people across the Muslim world. You come from a great tradition that stands for education, not ignorance; innovation, not destruction; the dignity of life, not murder. Those who call you away from this path are betraying this tradition, not defending it.

"...Now, ultimately, the task of rejecting sectarianism and rejecting extremism is a generational task --and a task for the people of the Middle East themselves."

Even going back to 2009 in Obama's big Cairo speech, meant as something of an olive branch to Muslim-majority countries after the George W. Bush presidency, Obama said this:

"...So America will defend itself, respectful of the sovereignty of nations and the rule of law. And we will do so in partnership with Muslim communities which are also threatened. The sooner the extremists are isolated and unwelcome in Muslim communities, the sooner we will all be safer."