Accessibility links
Pearl Harbor: How 'A Date Which Will Live In Infamy' Almost Wasn't On the anniversary of Pearl Harbor, the Franklin D. Roosevelt Presidential Library is making public digitized versions of the president's speech drafts, revisions and audio files for the first time.

Pearl Harbor: How 'A Date Which Will Live In Infamy' Almost Wasn't 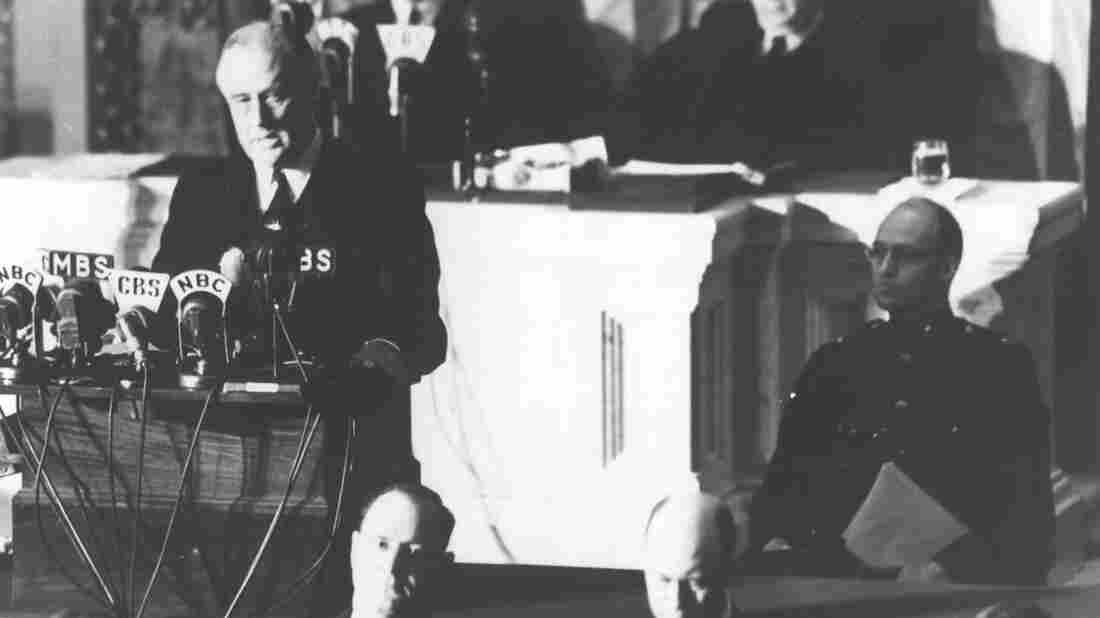 President Franklin D. Roosevelt addressed Congress on Dec. 8, 1941, a day after the Pearl Harbor attacks, to ask for a declaration of war against Japan. FDR Presidential Library hide caption 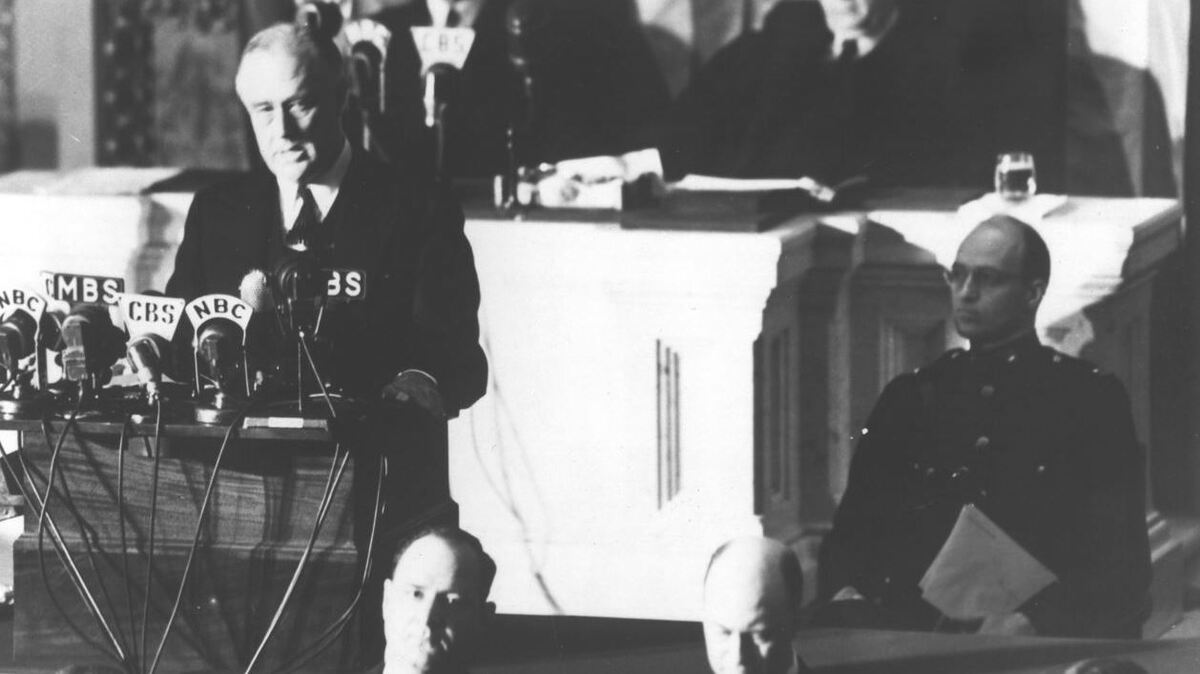 President Franklin D. Roosevelt addressed Congress on Dec. 8, 1941, a day after the Pearl Harbor attacks, to ask for a declaration of war against Japan.

Seventy-four years ago, President Franklin D. Roosevelt proclaimed Dec. 7, 1941, as a "date which will live in infamy" after the Japanese attacked Pearl Harbor.

But that most powerful line in his speech asking Congress to declare war and bring the U.S. into World War II almost wasn't. Roosevelt's original draft called it "a date which will live in world history," rhetoric that had far less oomph.

You can see that memorable revision and others yourself thanks to thousands of pages of FDR's speeches made available Monday digitally for the first time. 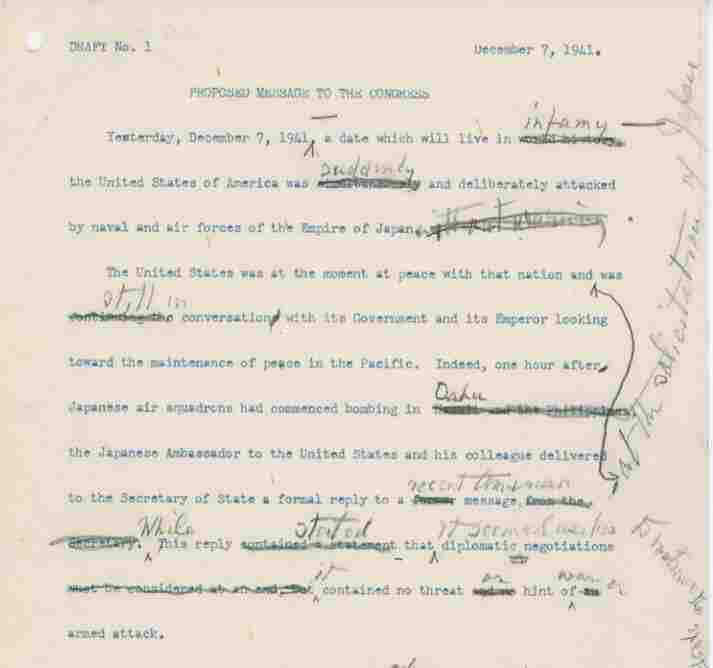 President Franklin D. Roosevelt made an important revision to his first draft of the address he would make to Congress on Dec. 8, 1941, after the Pearl Harbor attacks. FDR Presidential Library hide caption

The massive archive at the Franklin D. Roosevelt Presidential Library, thanks in part to support from AT&T, includes over 46,000 pages of drafts, reading copies, transcripts and their audio files from Roosevelt's 12 years in office — all online and free to the public.

It's the largest archive of any president, according to FDR Library Director Paul Sparrow, and provides new insight into Roosevelt's presidency.

"Roosevelt was a historian and a collector," Sparrow said. "He kept every draft, every script."

The Pearl Harbor speech — made Dec. 8 — stands out as one of the most pivotal moments of Roosevelt's presidency. On his blog, Sparrow wrote that it "represents the tipping point, the actual moment when the United States was transformed from an isolationist nation to a global superpower and leader of the free world. Its message of resolve and determination in the face of a devastating attack is as relevant today as it was then."

And it was written almost entirely by Roosevelt himself, not by speechwriters or his advisers. Roosevelt dictated the speech to his secretary just three hours after learning of the attacks.

Roosevelt made edits to that draft — most important, changing "world history" to "infamy" in the first line. His close adviser, Harry Hopkins, would make the only other addition: "With confidence in our armed forces — with the unbounding determination of our people — we will gain the inevitable triumph — so help us God."

The State Department was also pressuring Roosevelt to deliver a much longer, historical speech that detailed the U.S.-Japan tensions. Officials even presented the president with a 17-page suggested draft. Roosevelt politely listened to their suggestions, but had already decided he would stick with his three-page, seven-minute speech.

The forceful brevity of that speech at such a crucial moment in U.S. history is one reason it is among the best-remembered in history.

Roosevelt, who was of course the longest-serving president in history, gave the most speeches and press conferences of any chief executive too. And as radio in the 1930s and 1940s became a way to reach the masses, he embraced it like no other with his regular "Fireside Chats."

Though he didn't actually deliver them beside a fire, his rhetorical gift was on full display in the regular addresses, using common words and a conversational tone to reach the American public.

"In his own mind, he imagined sitting at a kitchen table and talking to his neighbors," Sparrow said. "They have much more of an explanatory tone. Many are very instructional."

With the full digitization of their files — the first presidential library to complete such an undertaking — speeches that once had to be viewed only in the library's archives rooms can now be seen by the public, where people can see for themselves how Roosevelt helped shape the legacy of presidential oratory.