Accessibility links
Trump Calls For 'Total And Complete Shutdown Of Muslims Entering' U.S. In his most drastic and controversial statement yet, Trump calls for a stop on any Muslims entering the U.S. "until our country's representatives can figure out what is going on." 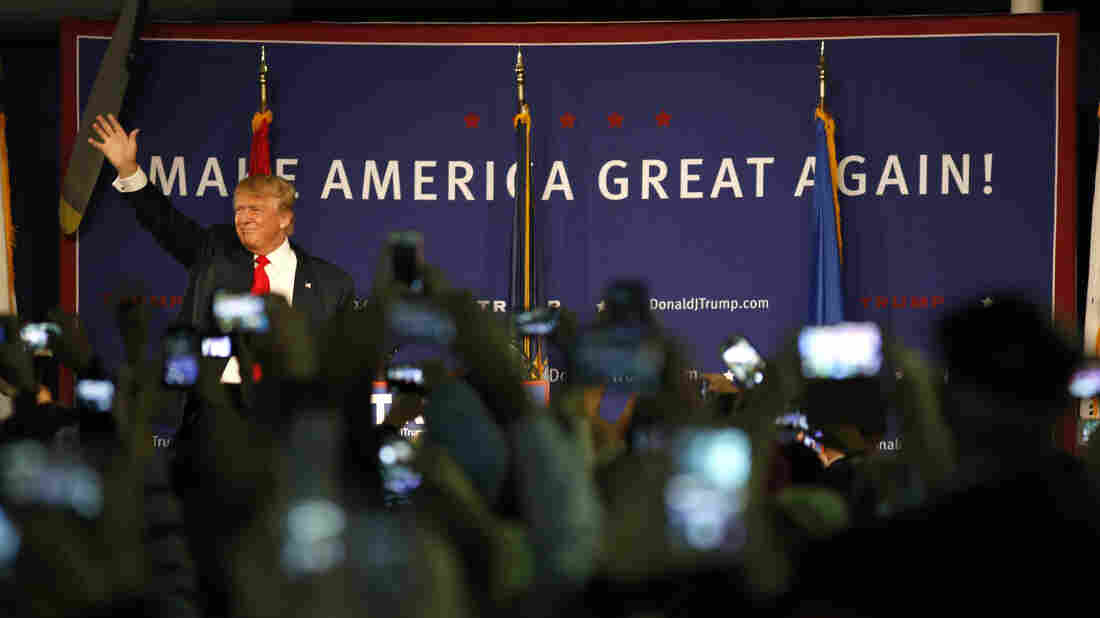 After issuing a statement calling for a ban on Muslim immigrants, Donald Trump holds a rally in Mt. Pleasant, S.C., on Monday. Mic Smith/AP hide caption 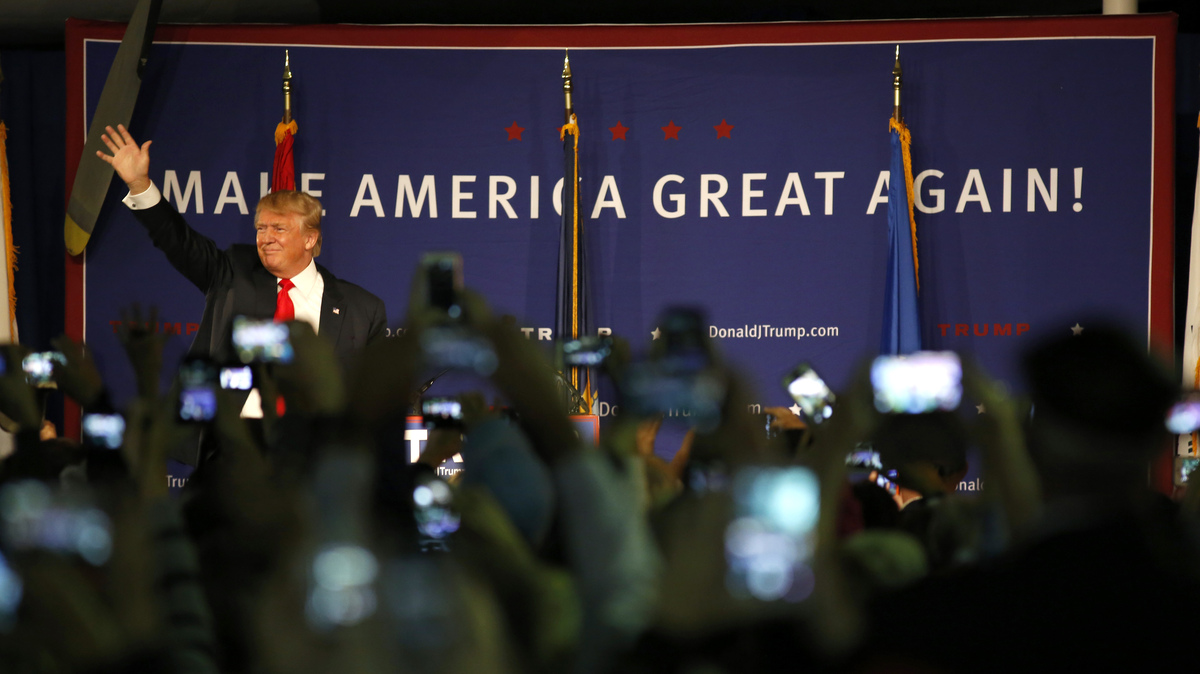 After issuing a statement calling for a ban on Muslim immigrants, Donald Trump holds a rally in Mt. Pleasant, S.C., on Monday.

Donald Trump made a drastic call on Monday for "a total and complete shutdown of Muslims entering the United States until our country's representatives can figure out what is going on."

Trump's call comes one day after President Obama's address from the Oval Office in the aftermath of the San Bernardino, Calif., shootings that were carried out by an apparently self-radicalized married couple. The male shooter was an American citizen, born in the United States. His wife was born in Pakistan but was in the U.S. legally on a visa for fiancees.

At a rally in Mount Pleasant, S.C., Monday evening, Trump read the statement to loud cheers from the crowd. He repeated claims that Muslims around the world believe violence against Americans is justified and that they believe American Muslims should be allowed to live under sharia law.

Trump also addressed how people can be radicalized online, suggesting "maybe in certain areas closing that Internet up in some way." He also repeated calls for surveillance on mosques in the U.S. "Yes, we have to look at mosques, and we have to respect mosques," he said. "Because something is happening in there. Man, there's anger, and we have to know about it."

His appearance was interrupted by protesters several times, including when he was explaining his latest proposal on keeping Muslims from entering the country. At that point, Trump referred to the person interrupting his rally by saying, "That's alright. He sounds like he's very exhausted."

Trump, the wealthy real estate magnate who remains atop the GOP presidential field, has faced backlash for previous statements against Muslims and, before that, Hispanics. Following terrorist attacks in Paris, Trump endorsed the idea of a database to register Muslims in the U.S., saying he would "strongly consider" shutting down some mosques.

Pointing to polling data from the Pew Research Center and the right-leaning Center for Security Policy, Trump argued that Muslims' "great hatred" of America had reached such a peak that drastic measures should be taken. But the data — or their validity — aren't what's important.

"Without looking at the various polling data," Trump said in a statement, "it is obvious to anybody the hatred is beyond comprehension. Where this hatred comes from and why we will have to determine. Until we are able to determine and understand this problem and the dangerous threat it poses, our country cannot be the victims of horrendous attacks by people that believe only in Jihad, and have no sense of reason or respect for human life."

Trump campaign manager Corey Lewandowski clarified that the ban would apply to "everyone," including tourists, according to ABC.

The polling Trump uses — or interprets — to substantiate his argument is also suspect. The June 2015 Center for Security Policy poll is an online survey — a method seen as less reliable than live-caller surveys. Respondents were also given limited or leading choices for their responses.

A 2011 Pew survey, which Trump appears to be referencing, surveyed Muslims in seven Muslim-majority countries — Muslims in the U.S. were not surveyed. The word "hate" was never used — 68 percent of Muslims surveyed described Westerners as "selfish," 66 percent called them "violent" and 57 percent said "arrogant."

"One has to wonder what Donald Trump will say next as he ramps up his anti-Muslim bigotry," Council on American-Islamic Relations communications director Ibrahim Hooper told the Washington Post. "Where is there left for him to go? Are we talking internment camps? Are we talking the final solution to the Muslim question? I feel like I'm back in the 1930s."

One of Trump's rivals, New Jersey Gov. Chris Christie, was quick to condemn the statement. "This is kind of thing people say when they have no experience & no idea what they're talking about," Christie said, according to WNYC's Matt Katz.

South Carolina Sen. Lindsey Graham tweeted that "every candidate for president needs to do the right thing and condemn" Trump's statement.

I disagree with Donald Trump's latest proposal. His habit of making offensive and outlandish statements will not bring Americans together.

The chairs of the state Republican parties in the early voting states of Iowa, New Hampshire and South Carolina all pushed back on Trump's proposal.

The U.S. is a strong nation when we stand together. We are weak when we allow racism and xenophobia to divide us. cc: @realDonaldTrump

.@realdonaldtrump removes all doubt: he is running for President as a fascist demagogue.

While referring to the idea as "at least, in part, an unconstitutional position," conservative commentator Erick Erickson described the move by Trump as "brilliant politics for the here and now."

He added, "it is really brilliant politics for Trump right now in the Republican primary and the reactions from the other candidates prove it. All the people attacking Trump on his immigration proposals now attacking him on this have done themselves no favors within the primary process."