Accessibility links
Sanders Campaign To Reporters: 'Don't Ask About ISIS' The candidate was on a walking tour and press conference with black pastors in Baltimore. " I'd appreciate it if y'all would stay on topic today," his press secretary told reporters. 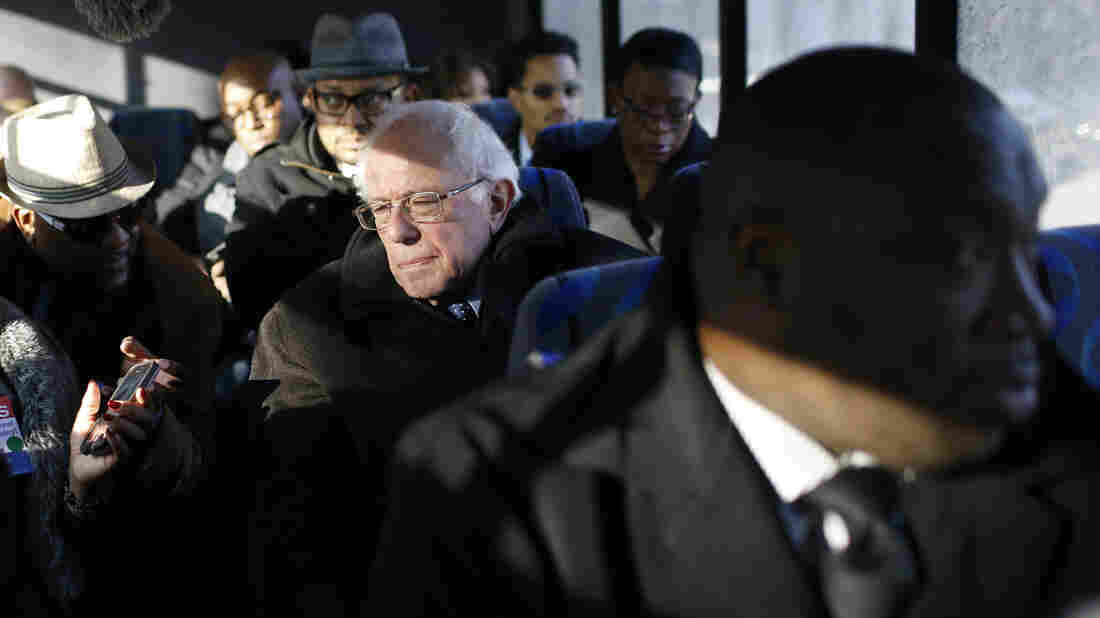 Bernie Sanders with preachers and reporters on a bus in Baltimore on Tuesday. Patrick Semansky/AP hide caption 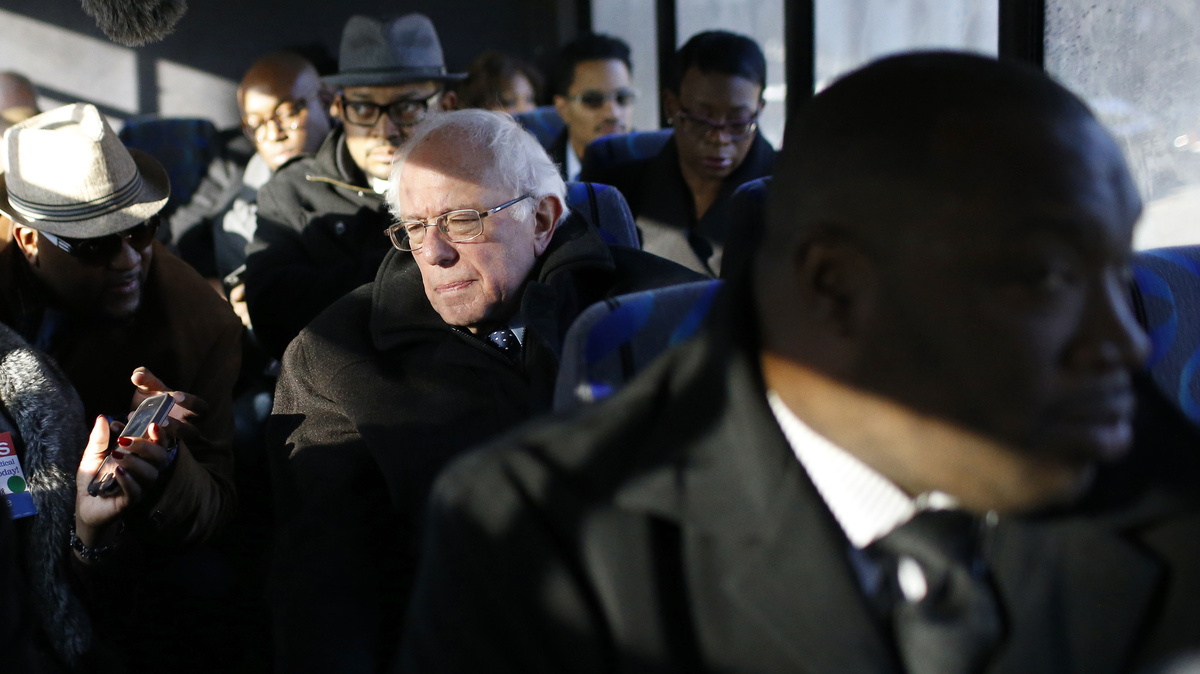 Bernie Sanders with preachers and reporters on a bus in Baltimore on Tuesday.

Presidential candidate Sen. Bernie Sanders of Vermont took a walking tour Tuesday of Sandtown, the Baltimore neighborhood rocked by riots after the death of Freddie Gray while in police custody earlier this year. But perhaps the most newsworthy comments came from Sanders and his press secretary, Symone Sanders (no relation), after the tour was complete.

After a closed-door meeting with a coalition of local pastors, Sanders was set to hold a press conference with the ministers. Shortly before the start of the presser, Symone Sanders urged news outlets gathered to keep their questions focused. "But again, questions about the meeting, questions about Baltimore, why he came," Sanders said, as live mics rolled. "If you want to ask about Chicago, we have a statement on Chicago that we put out a couple days ago. So you can definitely ask about Chicago. Don't ask about ISIS today. I mean, it's not on topic. If it comes up, and he wants to talk about it, the senator will let you know. But I'd appreciate it if y'all would stay on topic today."

At the end of the press conference, CNN's Dan Merica said to Sanders, "Your press secretary came in here and said not to ask about ISIS. Is there a reason that you do not want to talk about ISIS?"

Sanders responded with an irritated laugh: "Ha ha. All right, what about ISIS guys?" he asked, posing the question to the ministers. "How often are these people talking about the issues that we talked about today?" he continued, as the pastors nodded and said "yes" in agreement.

"Of course I'll talk about ISIS. But today what we're talking about is a community in which half of the people don't have jobs. We're talking about a community in which there are hundreds of buildings that are uninhabitable," he said. "We're talking about a community where kids are unable to go to schools that are decent. You wanna ask me about ISIS, we'll talk about ISIS. But what I said, and let me repeat — and you can agree with me or not — what I have said is that obviously ISIS and terrorism are a huge national issue that we've got to address. But so is poverty ... so is unemployment, so is education, so is health care. So is the need to protect working families.

"And I will, I will continue to talk about those issues. Thank you very much."

With that, Sanders left the podium.

Sanders has been sticking to his core campaign messages on the trail, seeming to even balk at the idea that he should be too responsive to the news. In New Hampshire earlier this week, as MSNBC reported, Sanders said, "If you turn on the TV, what they now say is well, we've got one problem: It's ISIS. We don't have to worry about old people not having enough to eat. We don't have to worry about having more people in jail than any other country. ... All we should focus on now, 24/7, is ISIS."

Earlier Tuesday, Sanders was led through the impoverished, mostly black neighborhood of Sandtown by pastor Jamal Bryant and a handful of other local pastors. Sanders got off a bus at the Baltimore street corner now infamous for having a CVS burn down during rioting after Gray's death. Bryant quickly pointed out that media unfairly focused on that store, instead of countless other black-owned businesses that were destroyed.

The pair, with a minimal security detail and Sanders' wife tagging along behind, were swarmed by press and locals the duration of their half-hour-long tour. As Sanders struggled to make his way down Baltimore streets surrounded by a crowd at least 20 deep, shouts from locals pierced the air, urging Sanders to bring jobs to the community, or defeat Donald Trump, or remember Freddie Gray.

Throughout the walk, Sanders spoke of the need to bring jobs, health care and housing to Americans like those in Baltimore.