Accessibility links
'Straw Buyers' Of Guns Break The Law — And Often Get Away With It They break the law by fraudulently filling out a form that says they're the actual buyer, but they're really buying the gun for another person — someone who might be avoiding a background check 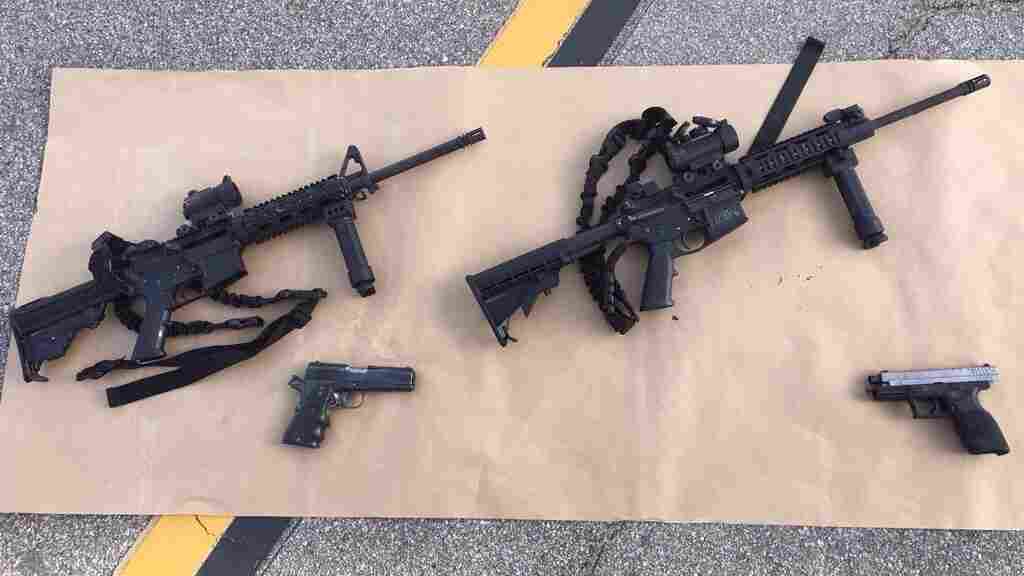 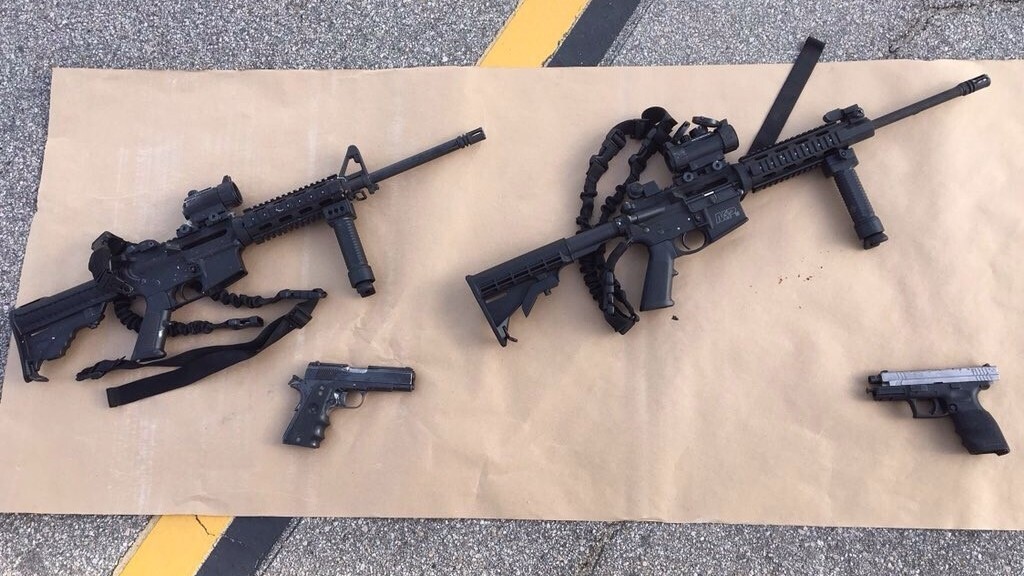 In this handout photo provided by the San Bernardino County Sheriff's Department, four guns are seen near the site of a shootout between police and suspects. The shooters left 14 people dead and 21 others wounded.

Authorities are still trying to determine how the San Bernardino shooters got the two assault-style rifles they used in the attack.

The guns were registered to Enrique Marquez, long-time friend of shooter Syed Farook. But it's not clear exactly how those guns wound up in the shooters' hands.

Buying guns from licensed dealers for someone else is illegal. "Straw purchasers" break the law by fraudulently filling out a form that says they're the actual buyer, but they're actually buying the gun for another person — someone who might be avoiding a background check.

Proving that scenario in court can be a challenge.

"You have to get into the mind of the person who's buying the gun and filling out the form," says Michael Bouchard, a retired assistant director for the Bureau of Alcohol, Tobacco, Firearms and Explosives. "The tough part about this is, and the reason straw purchasers rarely get prosecuted is, because it's in the eyes of the beholder."

For example, says Daniel Webster, head of the Johns Hopkins Center for Gun Policy and Research, someone could claim " 'I have no idea how that person got that gun. They may have stolen it from my house,' or 'I sold it to someone else, and I don't know who that person is.' So it's very difficult to pin someone down."

He says prosecutors usually need to show evidence that connects the straw buyer and the person he's buying the gun for. And if there's a conviction, straw buyers face penalties as high as 10 years in prison and $250,000 in fines.

"The law says that somebody could go to jail for up to 10 years and face a fine of up to $250,000. Why that doesn't happen more often is a question for, you know, the federal judiciary and the Department of Justice," Keane says.

Bouchard, who retired from the ATF in 2007, admits charging straw buyers falls towards the bottom of federal prosecutors' priority lists. He says the cases are difficult to win and resources are limited. That's why some states have moved to pass their own straw purchasing bans to supplement the federal one. For example, in California, even gifts have to be documented.

"If you're going to gift it, if it's anyone other than your immediate family, then you have to do the transfer through a dealer," he says.

As for the guns involved in the San Bernardino shooting, a law enforcement source and an intelligence source tell NPR that a dealer was not involved in transferring the assault-style rifles between Enrique Marquez and the shooters. And they say Marquez could be charged for an illegal transfer.