Accessibility links
Environmentalists Sound Alarm On Proposed Drilling Near Florida Everglades The National Park Service is weighing a Texas company's proposal to do seismic oil testing in the Big Cypress National Preserve, but some worry it will open the door for fracking in the Everglades. 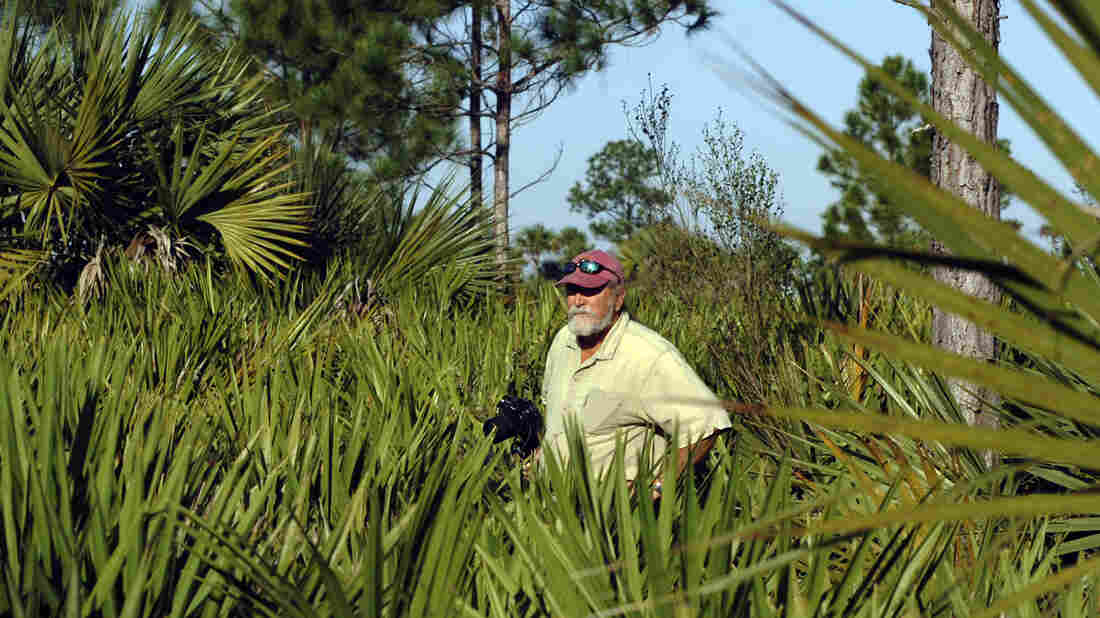 A botanist walks through the Pine Flatwoods of Big Cypress Preserve in December 2012. The preserve is home to several oil wells, but a proposed seismic study — being fought by environmentalists — could dramatically increase exploration. Tim Chapman/MCT/Landov hide caption 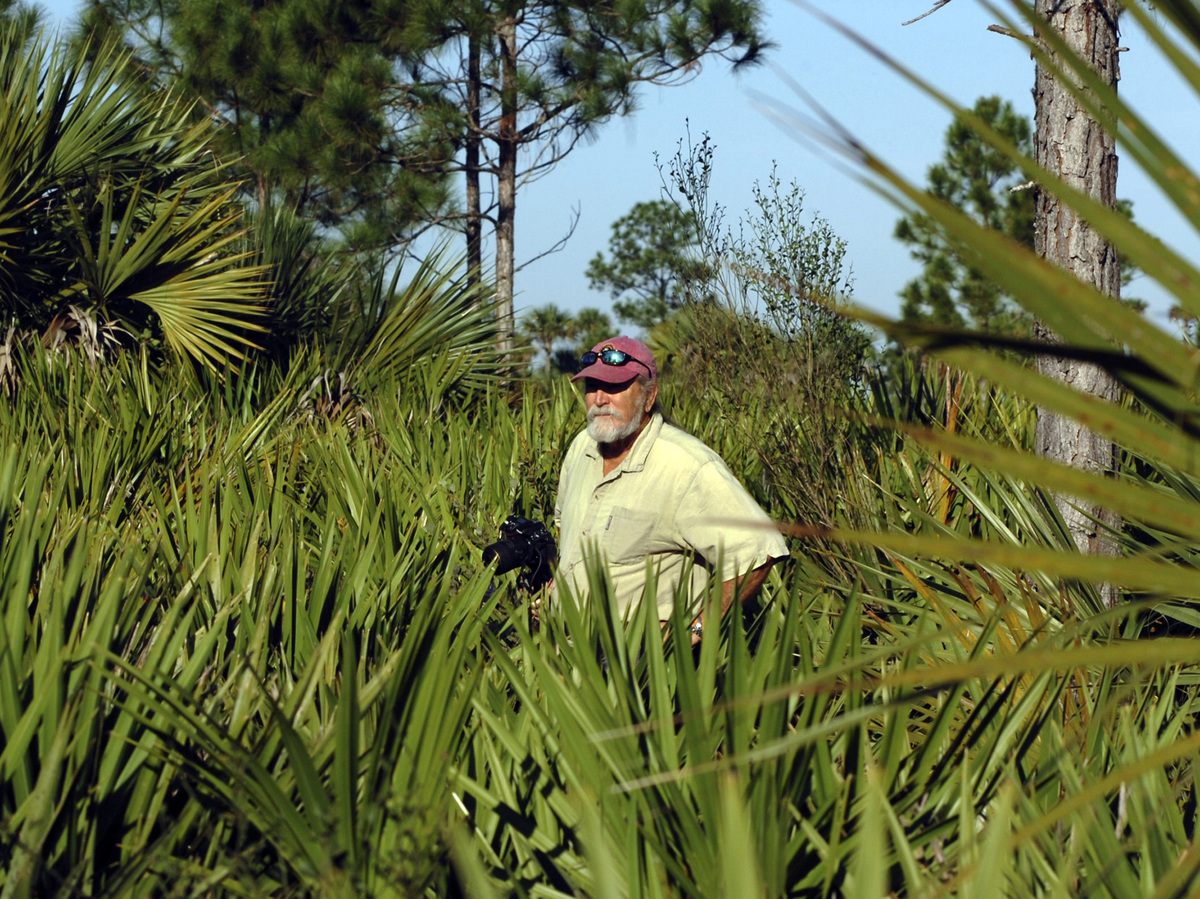 A botanist walks through the Pine Flatwoods of Big Cypress Preserve in December 2012. The preserve is home to several oil wells, but a proposed seismic study — being fought by environmentalists — could dramatically increase exploration.

Oil drilling isn't allowed in the 1.5 million-acre Everglades National Park, but the ecosystem extends far beyond the park's boundaries — and drilling is allowed in Big Cypress National Preserve, an adjacent protected area about half the size of the park.

Environmental groups are concerned that the testing may harm endangered plants and animals, and that it may open sensitive areas to drilling and fracking.

Betty Osceola, a member of the Miccosukee tribe, has lived her whole life in the Everglades. During the Seminole Wars of the 19th century, her ancestors hid from federal troops in the Everglades swamps and cypress forests.

Osceola is part of a group protesting plans for seismic testing on 70,000 acres in a key part of the ecosystem inside Big Cypress National Preserve.

Don Hargrove, the preserve's minerals management specialist, says there's nothing new about the efforts to drill there.

"Oil drilling and oil fields were here when Big Cypress was created; as a condition of the establishment of the preserve, oil and gas was to continue," he says.

Florida County Goes To Court Over 'Acid Fracking' Near Everglades

Oil Industry Gets An Earful As It Eyes Florida's Everglades

There are over a dozen active wells in Big Cypress now, Hargrove says, and that number may increase. The Burnett Oil company wants to look for oil by crisscrossing the Preserve with large, 60,000-pound trucks that vibrate large plates against the ground to generate seismic signals. The first phase of the survey would take about 8 weeks.

In an environmental assessment, the National Park Service said it believed the activity likely would have only a minor impact on endangered wildlife; animals like the Florida panther, for instance, are expected to move away from the trucks.

Matthew Schwartz, with the South Florida Wildlands Association isn't so sure.

"They have no idea when they're going through an area if there's a denning panther, maybe a female panther with kittens in an area," he says. "And that panther may abandon a den when it hears the intrusion."

The staff at Big Cypress National Preserve held a public meeting this week to answer questions about the seismic testing, where they played a video of one of the large thumper trucks in action.

"It's an engine noise is all you hear," he says. "When it's shaking, you can actually hear it shake up a little different pitch, but there's no boom." 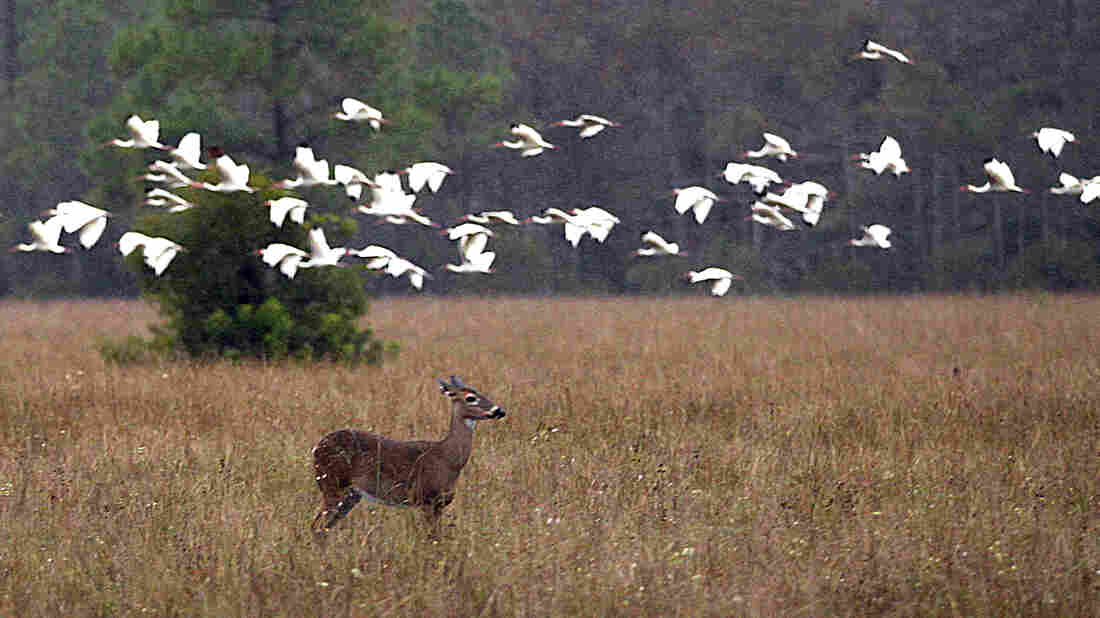 A deer and birds occupy the swampland in Big Cypress Swamp in in November 2011. Environmental groups are worried about the impact a seismic test — and subsequent oil exploration — might have on the animals in Big Cypress Wildlife Preserve. Charles Trainor Jr./MCT /Landov hide caption 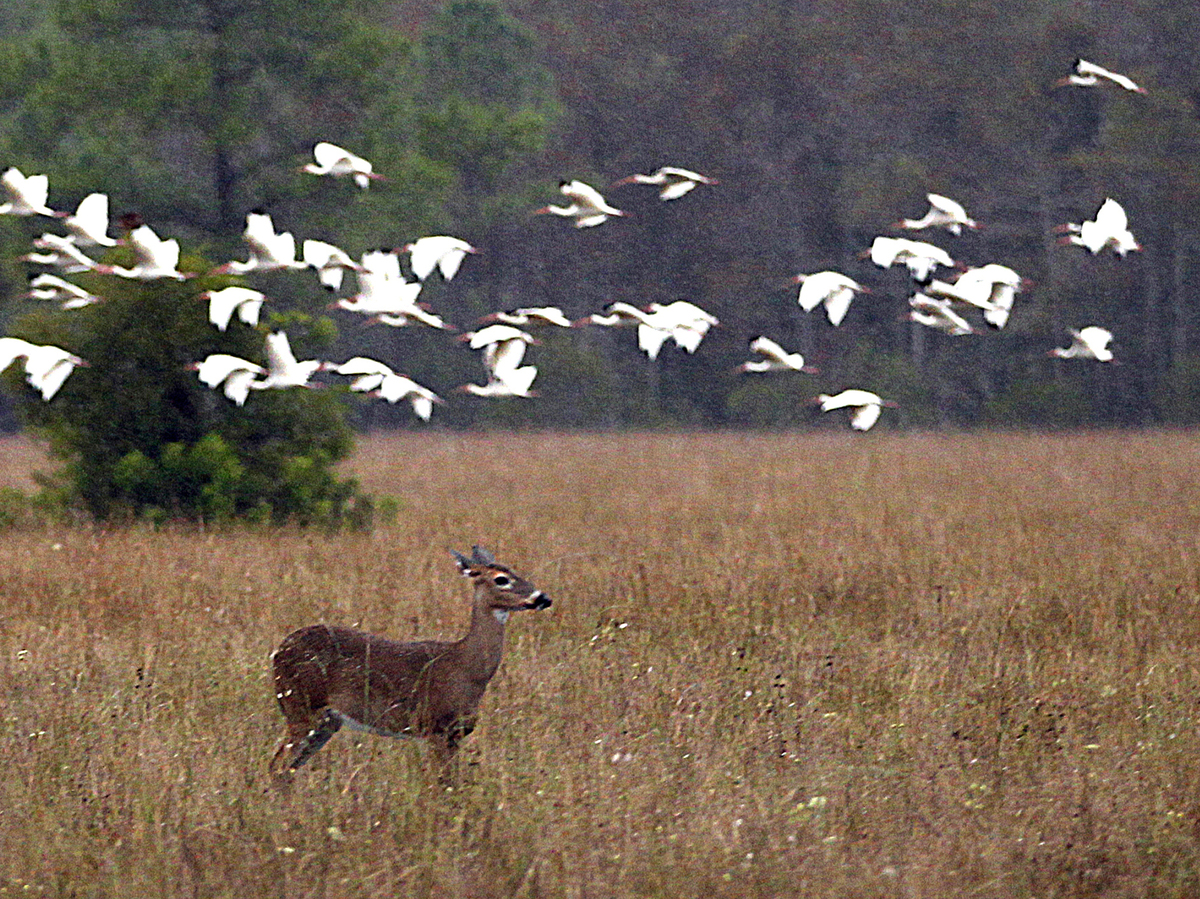 A deer and birds occupy the swampland in Big Cypress Swamp in in November 2011. Environmental groups are worried about the impact a seismic test — and subsequent oil exploration — might have on the animals in Big Cypress Wildlife Preserve.

For environmental groups and others who live near Big Cypress, the bigger concern may be what the survey reveals. With new techniques like horizontal drilling and hydraulic fracturing — fracking — oil companies have begun taking a new look for reserves in Florida, and they're particularly interested in a geological area called the Sunniland Trend that runs far beneath the preserve.

Wisniewski says that's where the seismic survey comes in.

"So this identify, hopefully reserves, for Burnett and then minimize the amount of drilling they have to actually do," he says.

Matthew Schwartz of the South Florida Wildlands Association says a large chunk of the Everglades could see drilling — Burnett Oil Company has rights to look for oil on more than half of the preserve's 730,000.

"They're probably going to find oil, because this is smack in the middle of the Sunniland Trend," Schwartz says. "And then comes what? New access roads, oil pads, drill rigs — fracking? I mean, all of that is on the horizon for the most biodiverse piece of federal land, public land, in the continental United States?"

Before it approves the survey and possibly more drilling, Schwartz is calling on the National Park Service to prepare a full environmental impact statement. If necessary he says, he'll go to court to force the issue.