Accessibility links
Utah Reduced Chronic Homelessness By 91 Percent; Here's How Over the past decade, Utah's toughest cases of homeless people dropped to fewer than 200, from nearly 2,000. Utah's size and support from Mormon leaders are among the reasons for its success. 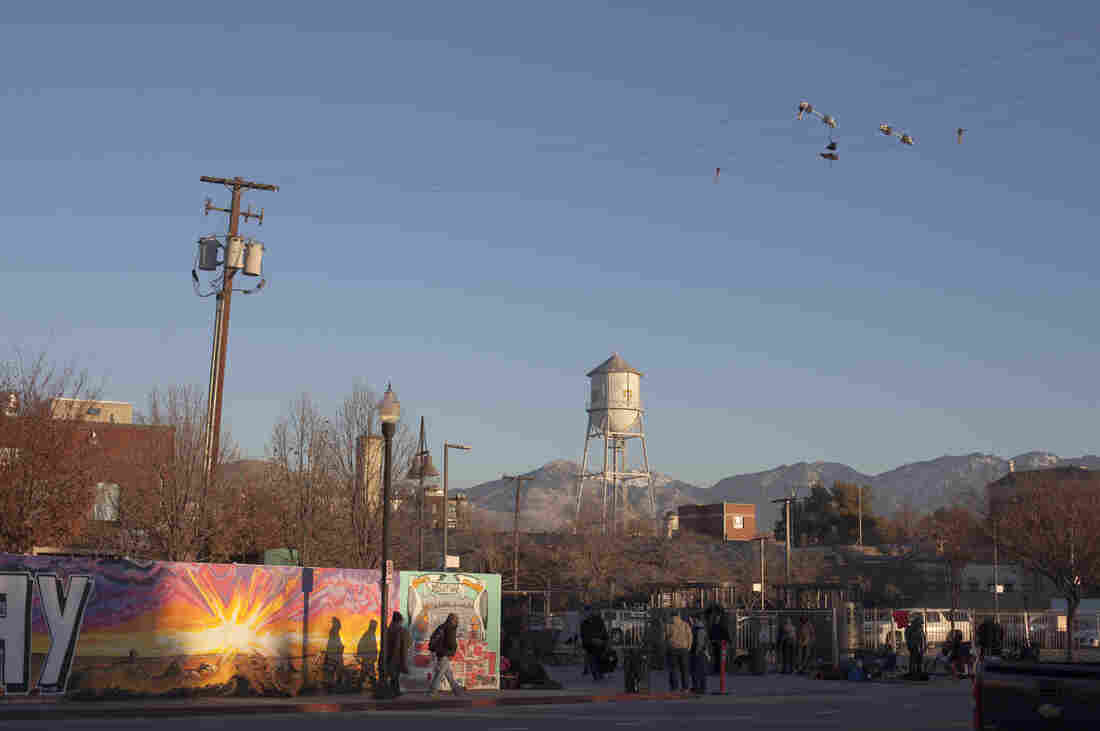 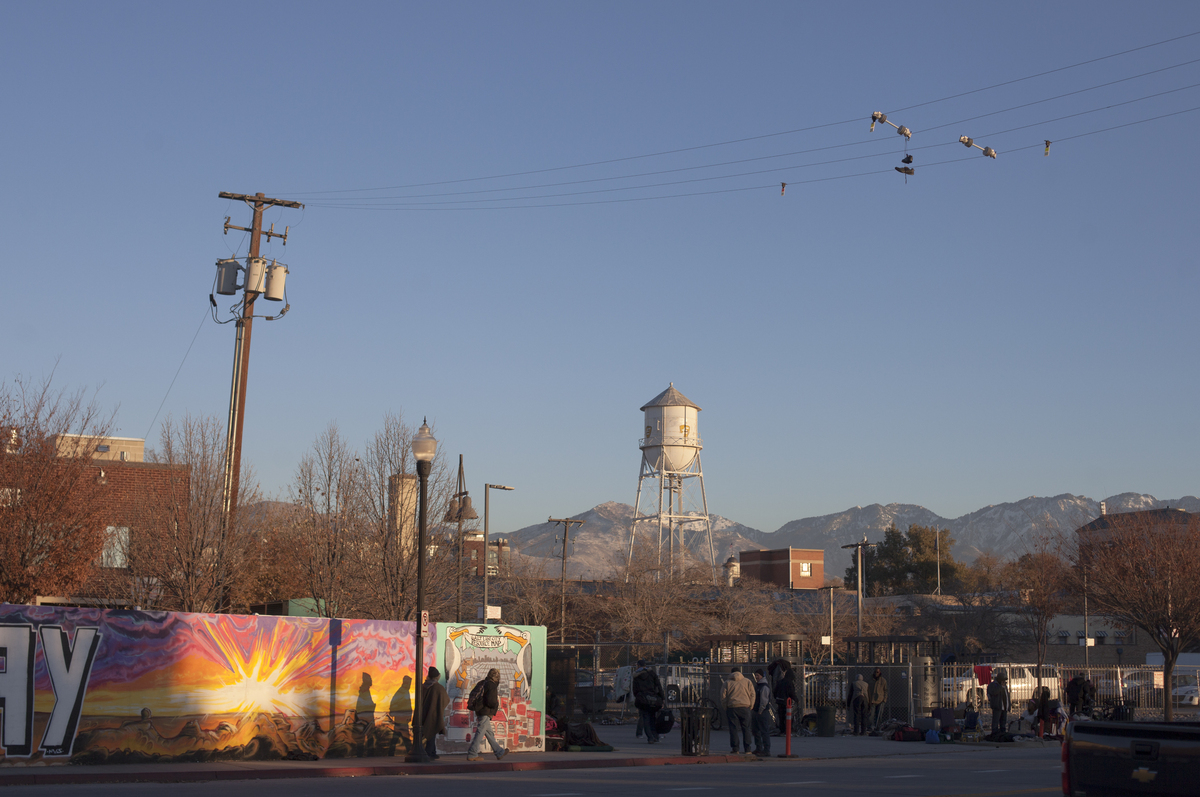 The Road Home is a private nonprofit social services agency that assists homeless individuals and families, in downtown Salt Lake City, Utah. Here, a view from outside.

A decade ago, Utah set itself an ambitious goal: end chronic homelessness.

As of 2015, the state can just about declare victory: The population of chronically homeless people has dropped by 91 percent.

The state's success story has generated headlines around the country, and even The Daily Show With Jon Stewart looked to Utah to understand how the state achieved its goal.

In fact, Utah still has a substantial homeless problem. The overall homeless population is around 14,000.

I get probably two to five calls a week now, wanting to know how we did it, what's unique about Utah.

The chronically homeless, on the other hand, are a subset of the homeless population that is often the most vulnerable. These are people who have been living on the streets for more than a year, or four times in the past three years, and who have a "disabling condition" that might include serious mental illness, an addiction or a physical disability or illness.

According to the Department of Housing and Urban Development, that represents about 20 percent of the national homeless population.

By implementing a model known as Housing First, Utah has reduced that number from nearly 2,000 people in 2005, to fewer than 200 now.

'I'm Gonna Lay In The Bathtub For About A Week'

Kim Evans is one of those few who remains chronically homeless, and his life is about to change.

Right now he lives outside Salt Lake City, in the woods next to a highway.

Amanda Lee and Sanela Piragic, outreach workers from the nonprofit Volunteers of America, regularly visit him at his encampment. 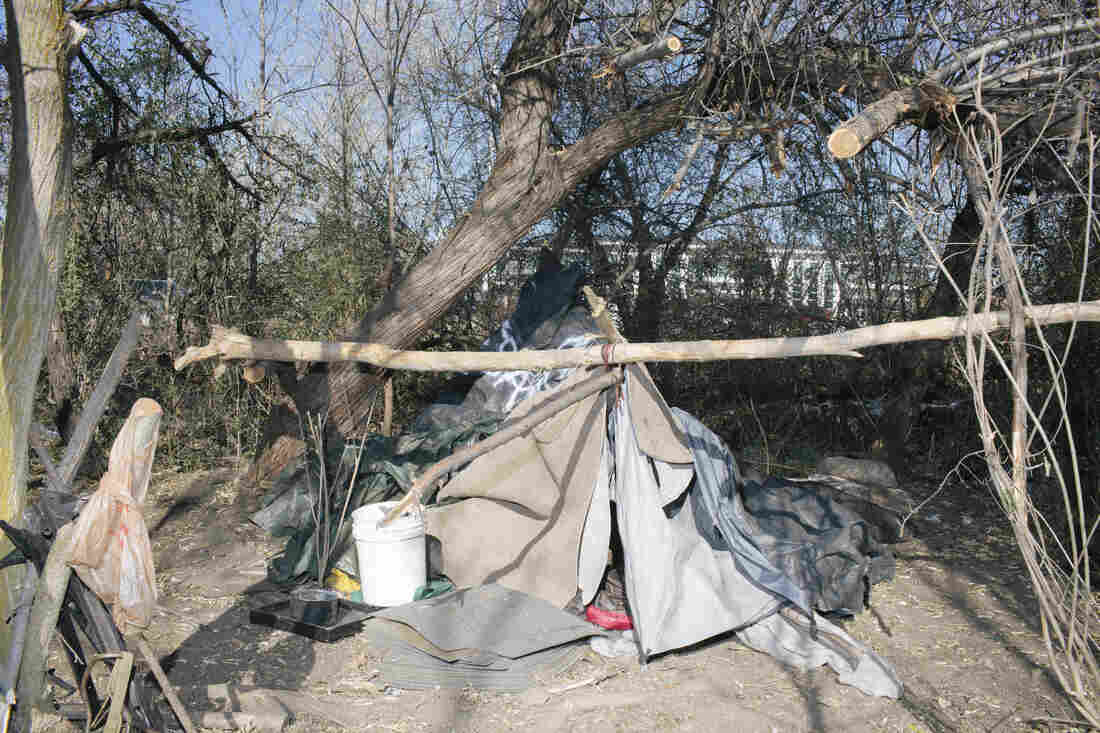 The city's homeless live in encampments like this one in South Salt Lake. Cayce Clifford for NPR hide caption

Evans has cleared out a lot of the trees there. He says he likes to think of this place as his own park. He is 54 years old, but looks a lot older.

He has a tent with a fence around it made of wood, piles of tarp and grocery carts full of stuff he collects. He wears a good new winter coat, which was donated. He says he's been living outside for five years.

"Too long," says Amanda Lee, one of the outreach workers.

He has a bad back injury and has struggled with drugs and alcohol. When he talks, he's a little hard to understand. He said he's had a stroke and is missing some teeth.

But any day now, he's about to get his own apartment, mostly paid for by the federal government. He says he doesn't want to spend another winter in the woods.

"Now that the trees are thinner, it's even colder," Evans says. "I'm gonna lay in the bathtub for about a week." 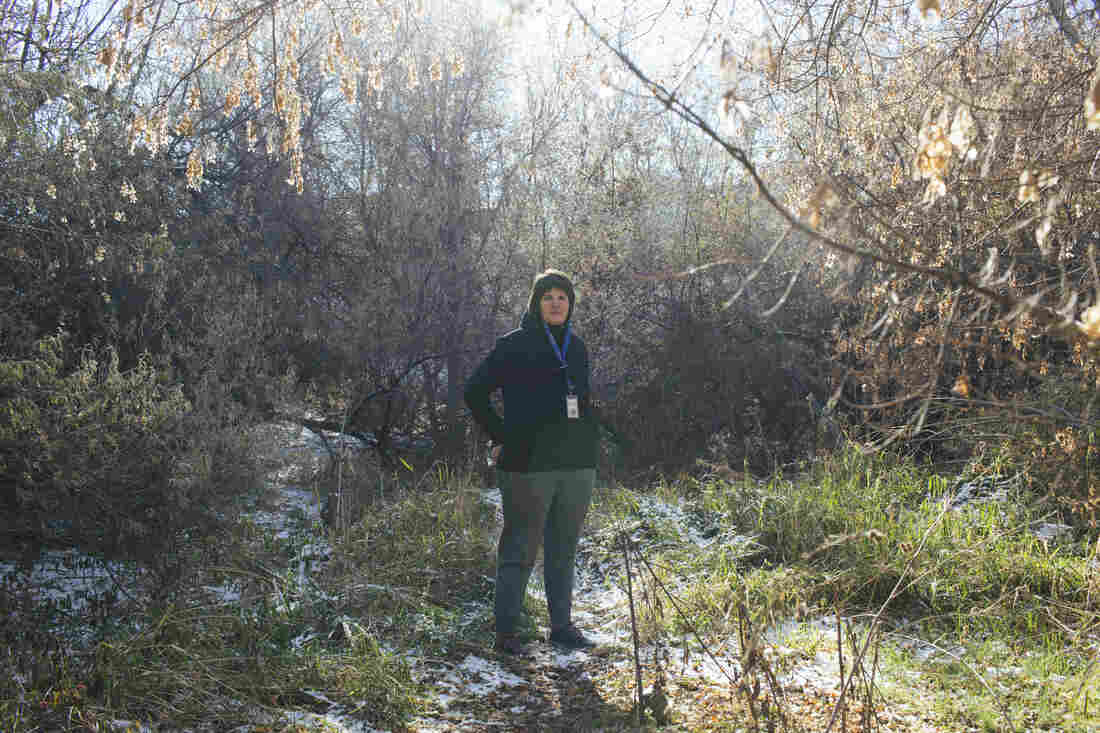 Under a previous anti-homelessness model, Kim Evans would've had to prove he was sober and drug-free before he could get housing and take that warm bath. Or he might have just stayed homeless.

The idea of Housing First is that housing comes first, services later. Clients do have to pay some rent — either 30 percent of income or up to $50 a month, whichever is greater.

A similar approach was first tried in Los Angeles in the late 1980s and New York City in the early 1990s.

"And I said you guys are smoking something, because there's no way on this earth that you're going to end homelessness," says Lloyd Pendleton, who at the time ran humanitarian services for the Church of Jesus Christ of Latter-day Saints.

He says as a conservative, he didn't think the government should simply give people a place to live.

"Because I was raised as a cowboy in the west desert," Pendleton says, "and I have said over the years, 'You lazy bums, get a job, pull yourself up by the bootstraps.'" 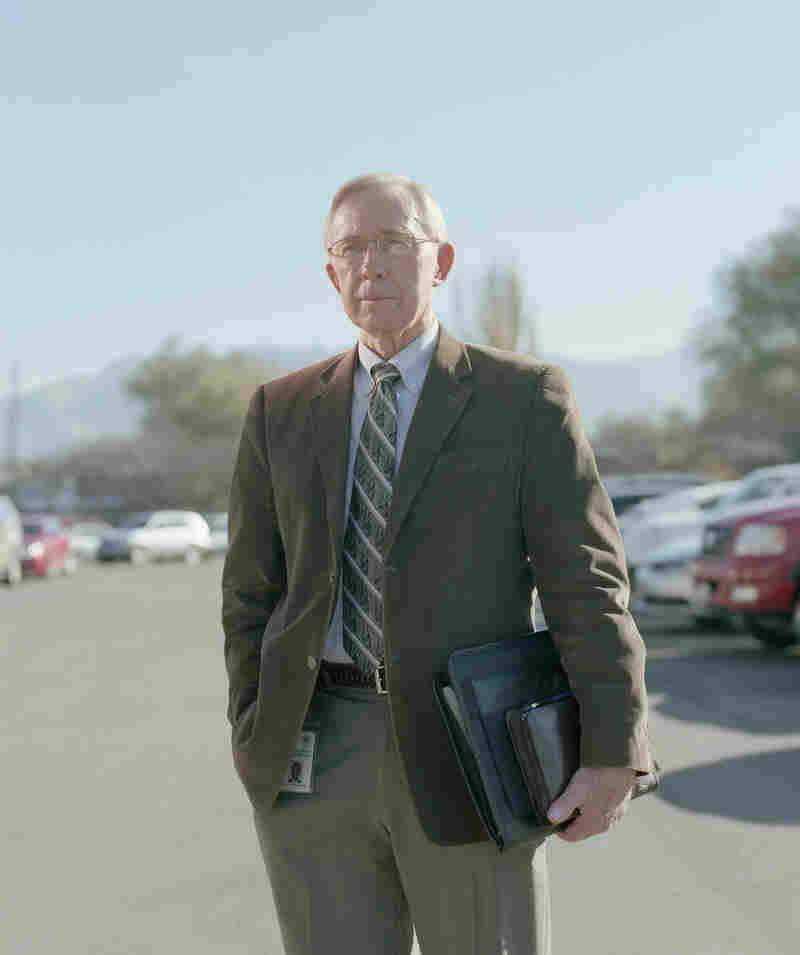 As a conservative, Lloyd Pendleton didn't think the government should simply give people a place to live. But he changed his mind after learning about the Housing First model and now heads Utah's Homeless Task Force. Jim McAuley hide caption

Then in 2003, Lloyd Pendleton went to a conference on homelessness in Chicago.

At that conference, a founder of the Housing First philosophy, Sam Tsemberis, told him that chronically homeless people cost the government a lot of money when they're living on the street, because of services like emergency room visits and jail time.

On the way home Pendleton says he sat in a window seat on the plane.

"And as we flew out and we flew through the clouds," Pendleton says, "I can remember looking out at the clouds and saying, 'Lloyd if there's any state in the union that can accomplish this, it's the state of Utah.'"

Back in Utah, he helped launch a pilot project in Salt Lake City that housed 17 of the hardest cases and provided them with services. Almost two years later, Pendleton says, all those people remained housed.

Pendleton eventually became the director of the state's Homeless Task Force. And he got everybody all the way up to the governor on board.

According to Pathways to Housing National, Utah was the first to take the Housing First model statewide.

And even though many cities in the U.S. have also been doing this for a while, they still come to Utah to study why it's working so well here.

"I get probably two to five calls a week now, wanting to know how we did it, what's unique about Utah," says Pendleton, "because it can be done."

Advocates and officials say a few factors helped Utah near its goal of ending chronic homelessness.

Second, the Church of Jesus Christ of Latter-day Saints, which has significant influence in Utah, was a big supporter of Housing First.

The U.S. Declared War On Veteran Homelessness — And It Actually Could Win

As well, Utah had a champion in Lloyd Pendleton — someone who believed in the idea and was willing to push politicians and advocates to go along.

And finally, most of the advocates and agencies in Utah know each other and work well with each other. They also know most of the homeless people by name.

Matching The Homeless With Homes

Every Tuesday in Salt Lake City, people in all the organizations that work with the chronically homeless gather in a small meeting room at a nonprofit called The Road Home.

On a recent Tuesday, Kevin Austin, the group's housing supervisor, looks through a list of 86 chronically homeless people in the Salt Lake region who qualify for housing.

Even though Utah is committed to Housing First, there still isn't enough housing for every one of the chronically homeless. And so the group has to assess need, and match the right apartment opening with the right person.

(For privacy reasons, NPR is not revealing clients' names.)

For instance, there's an opening at a group living site with shared bathrooms. Austin notes they need a candidate who is male and "plays semi-nice with others."

One person recommends a name from the list. And just before the group is ready to finalize that decision and move on, Ed Snoddy, who does medical outreach for Volunteers of America, a faith-based nonprofit, speaks up.

"Yeah, let's not do that then," says Austin.

The group agrees that this individual does not play nice with others, and isn't right for this particular apartment. For now, his name stays on the list.

The group works through a few more openings, trying to balance the needs of people living on the street with the housing available.

After the meeting, Austin says those decisions are tough.

"When we comb through and we're picking out three people from this list of 86," Austin says, "it does kind of suck to know that we left 83 people on that list that don't have an option — or at least a permanent option right now. But (for) those three people, that's their lifeblood."

Grace Mary Manor is a two-story building with hallways lined with doors to studio apartments. It's one place in Salt Lake City where chronically homeless people are placed in housing, and it provides services like counseling on site. 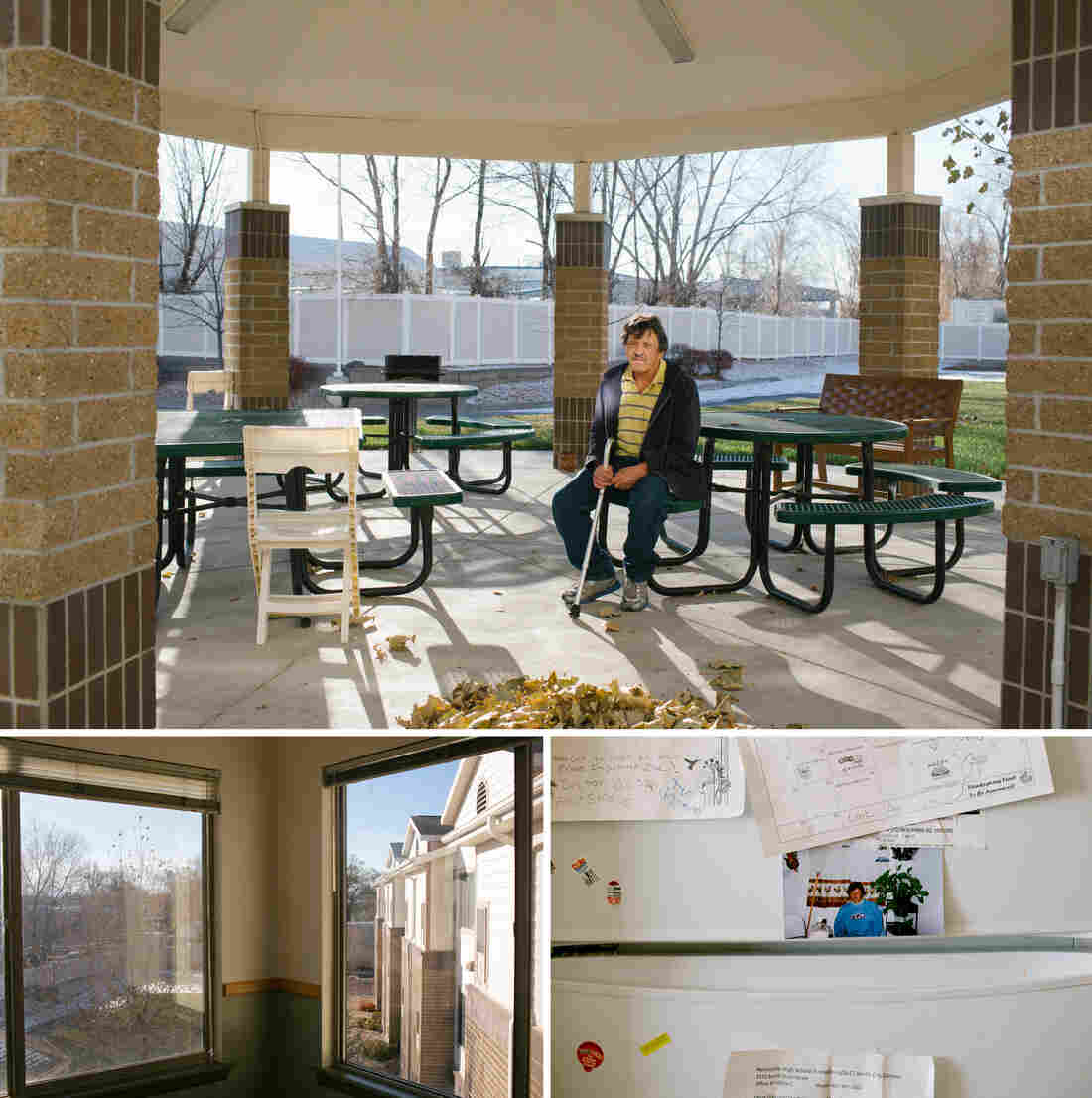 Grace Mary Manor in Salt Lake City is a permanent affordable housing facility for 84 chronically homeless individuals with a disabling condition. Formerly homeless, Joe Ortega has been living at Grace Mary Manor for the past six months. (Bottom right) Ortega keeps an old photo of himself on his refrigerator as a reminder of the time when he was struggling with homelessness. Cayce Clifford for NPR hide caption

Joe Ortega has been living at Grace Mary Manor for six months.

"It's my new addiction," says Ortega. "You know, it takes my mind off the old addiction."

Ortega used to drink a lot and do drugs. He says it's how he dealt with life on the streets. He was homeless for 20 years. For the past two years he lived under a bridge.

Then one day he started losing movement in his arms and losing his balance. He went to a doctor who told him to get sober.

"That was my first challenge," says Ortega. "Getting sober was the hardest."

It was right around this time that outreach workers started telling him that his name had come up, and that he was next on that list to be housed.

But Ortega didn't believe it. He says he kind of liked living in the streets.

"You think it's fun, when you first get out there," says Ortega. "It is fun to an extent. Because you're like, 'I've got freedom, and I don't have to answer to a landlord, and don't have to pay the light bill.' ... And that's what kind of keeps you out there."

Eventually the outreach team convinced him that the offer of housing was real.

"I was in shock at first," says Ortega "It was a little scary. I was scared. And I was like, 'What am I gonna do alone? I gotta find things to take up my time.'"

This is one challenge with housing the chronically homeless. Advocates say it takes time for people to get used to the fact that they have a home. Some people will sleep in tents, inside their apartments. Some will even go sleep on the streets a few nights a week.

Ortega says he spends his days with puzzles or watching documentaries on TV.

"I make the best of every day," he says.