Accessibility links
Despite Backlash Over Muslim Comments, Supporters Stand By Trump Voters who support Donald Trump reveal insights into the appeal of the leading Republican presidential candidate. We hear from a focus group of Trump supporters.

Voters who support Donald Trump reveal insights into the appeal of the leading Republican presidential candidate. We hear from a focus group of Trump supporters. 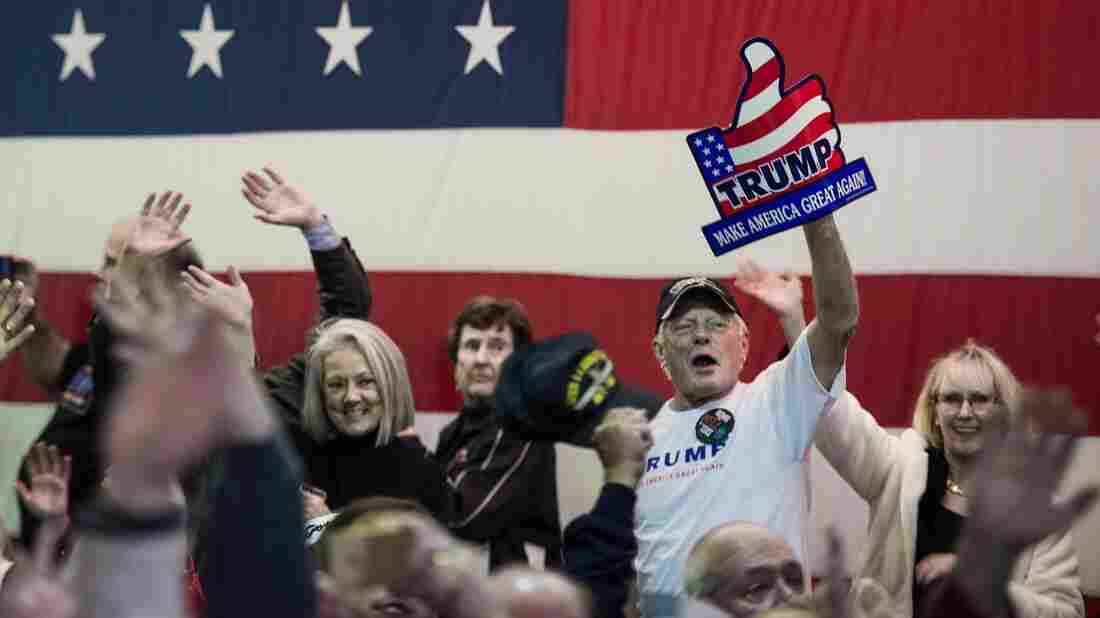 Supporters cheer at a Monday rally for Donald Trump, where he announced his plan to bar Muslims from entering the country. Sean Rayford/Getty Images hide caption 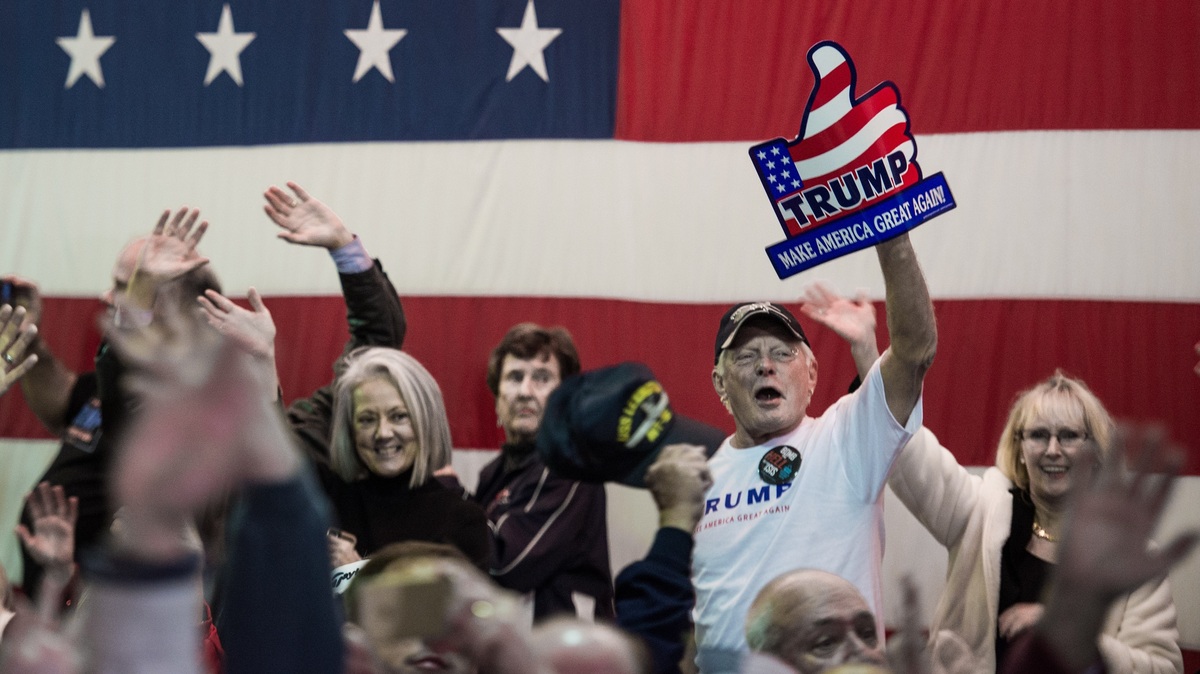 Supporters cheer at a Monday rally for Donald Trump, where he announced his plan to bar Muslims from entering the country.

Let's listen now to supporters of Donald Trump. The Republican presidential candidate provoked condemnation from leaders in both parties and around the world. He did that by proposing to bar all Muslims from entering the United States. So NPR national political correspondent Mara Liasson attended a focus group of Trump's supporters. That's where you gather a small group of voters in a single room and get them to talk in-depth. And Mara's on the line. Good morning.

INSKEEP: So what did Trump's supporters say?

LIASSON: Well, not surprisingly, as we have seen after every other Trump controversy, this one only increased their enthusiasm for him. His supporters thought the idea of a temporary halt in Muslims coming to the U.S. was a common sense proposal in a time of great fear about terrorism. And here's how one Trump supporter named Tina (ph) put it.

TINA: We have to do something. I mean...

TINA: ...We cannot keep going down this path. It seems to be coming more dangerous. I think we're all scared. I'm actually a little jumpy, I find. And Trump is the...

LUNTZ: What are you scared of?

TINA: ...Only one who would come out and say something like this. No one else would.

LUNTZ: And so you credit him with that.

LIASSON: So you heard the voice of Frank there. He's a Republican pollster who does focus groups like this all over the country. There were 29 Trump supporters, mostly white. All had some college education. They were from the Virginia-D.C.-Maryland area. When asked to come up with one or two words to describe what they liked about Trump, here's what they said.

UNIDENTIFIED WOMAN #3: Speaks what he thinks.

INSKEEP: Huge. OK, that's fine. That's fine. But let me ask more about this, Mara Liasson. There was a Bloomberg poll looking a little more broadly at voters. And they said Republican voters, now, being asked - do you support banning Muslims from the United States for a while? - and a strong majority said yes. And then Bloomberg asked another question. This is what I want to ask you about, Mara Liasson - the more detailed question. Bloomberg says in this poll, leaders from across the political spectrum have condemned this policy, saying banning members of an entire religion from entering the country goes against everything we believe in as Americans, and it will make our country less safe by alienated the allies we need to fight ISIS. People in the poll are told all of that and then asked, do you still support Trump's proposal? And majorities of Republicans, now - not the country at large, but Republicans - said yes. What is driving those voters?

LIASSON: Well, the same exact thing happened last night. Frank Luntz showed this group of Trump supporters lots of ads attacking Trump, lots of video clips meant to drive those negative points home. And at the end, the enthusiasm for Trump had gone up. The net result was it made them more supportive of him. Look, there's a lot of anxiety about terrorism among these groups, among the country at large. There's also a feeling the country has stagnated. There was tremendous animus to President Obama last night. Many of them said he was un-American, not a Christian and worse. There's also disgust with what they called a broken political system, and they're really angry at elites, whether it's the Republican establishment or particularly the media who they feel look down on them, tell them they're bigots. These are Trump supporters first, Republicans second, and they are extremely invested in the Trump candidacy. And as you can hear here, they tend to dismiss all the criticism about him and particularly - in particular, these latest criticisms of Trump from Republicans.

LUNTZ: So what do you think of their attacks? Do they have any chance of working?

UNIDENTIFIED WOMAN #7: They've tried everything. They have no idea what to do with this boy.

LIASSON: So my impression from this focus group is Trump will be very hard to stop.

INSKEEP: Nevertheless, Republicans are now trying to stop him. And there was much more ferocious and widespread criticism from Republicans of Trump this time around. Why is that?

LIASSON: Well, many people feel he did cross a line in a way he hadn't even done before and also that Republicans had to speak out because they believe Trump poses a danger to the party. It hurts them not just in the presidential race if he's the nominee, but down the ballot. And for a long time, many Republicans thought if they just took two aspirin and laid down, Trump would go away. But now, after months and months at the top of the polls, there is a real possibility that he could be the nominee.

So the question is - what do they do? As one person said to me yesterday, Republicans know Trump is a stain on their party. The question is - is it washable or indelible? And I think that's why you see this mixed reaction - Republican congressional leaders like Paul Ryan speaking out very firmly, but Republican candidates not as much, with the exception of the candidates in the single digits like Jeb Bush or Lindsey Graham, who said how to make America great again tell - Donald Trump to go to hell.

People like Ted Cruz, who has tried to position himself as the best second choice for Trump supporters, wouldn't condemn him. He said he disagreed with the policy. Michael Rubio said Trump's plan was impulsive and not well thought out. The other thing that's really annoying Republicans is that this was supposed to be their great week. The president gave a speech on terrorism that was not well received. They were working hard to tie Hillary Clinton to the president. Then along comes Donald Trump, and the story changes dramatically.

INSKEEP: And we have to remember in that Bloomberg poll, strong Republican support for Trump's proposal, but the country at large - strong opposition to that support. We've been listening to NPR national political correspondent Mara Liasson. Mara, thanks very much.