Accessibility links
Amid Violence, Chicago Parents Try To Inoculate Their Sons Against Fear It's been a tumultuous few months for parts of Chicago. Parents are doing their best to help their children understand what's happening and how their families and communities can move forward. 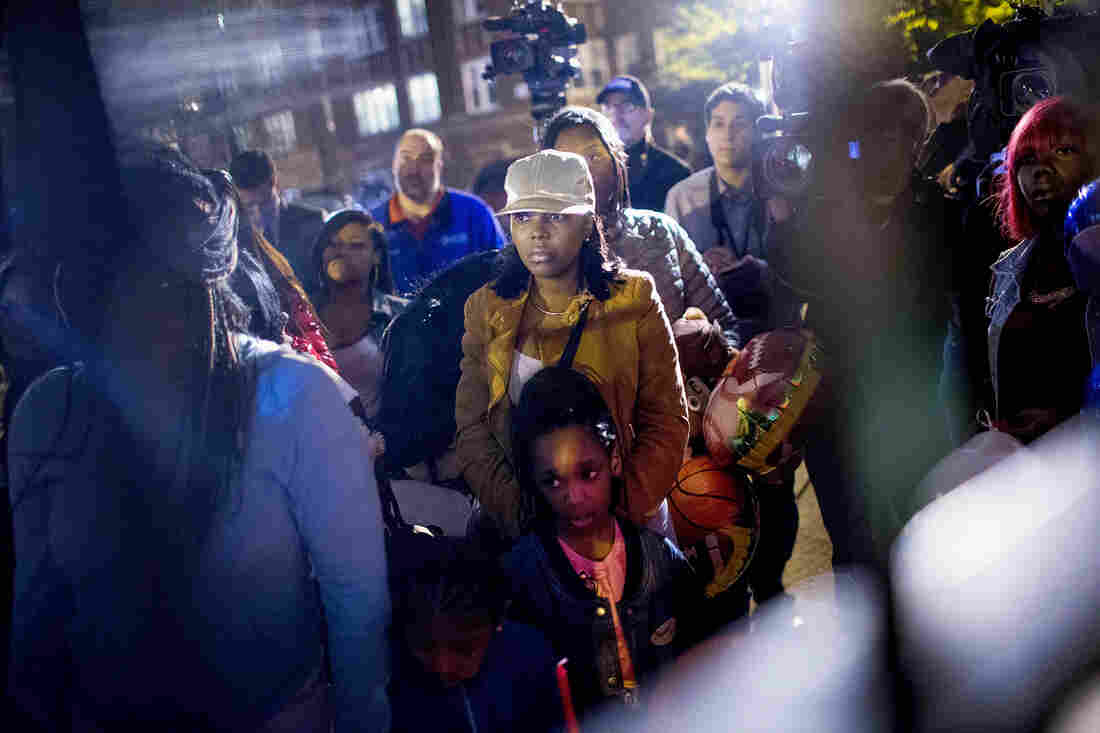 The protests in Chicago have been mostly peaceful. But it's not just about police. This is all happening against a backdrop of gang violence, including the recent killing of a 9-year-old boy who police say was apparently targeted because of his father's alleged gang ties.

These incidents are forcing difficult conversations between parents and kids. And for African-American families, the conversation hits close to home.

How do you talk about what's happening? How do you reassure your kids? And how do you keep them safe? We visited with two families at the beginning and end of a busy school day to find out.

Our first stop: the neighborhood of West Chatham on Chicago's South Side. That's where we met the Johnson family.

With his long dreadlocks, high cheekbones, and quick movements, Shango Johnson is catlike as he moves up and down the stairs.

He and his wife, Karen, start breakfast and their son, Brendan, comes down to the kitchen — unfazed by early-morning visitors. He's in third grade at the Montessori School of Englewood.

Brendan shows us his drawings on the refrigerator — Goldilocks and the three bears — then heads to the family room to turn on the TV. 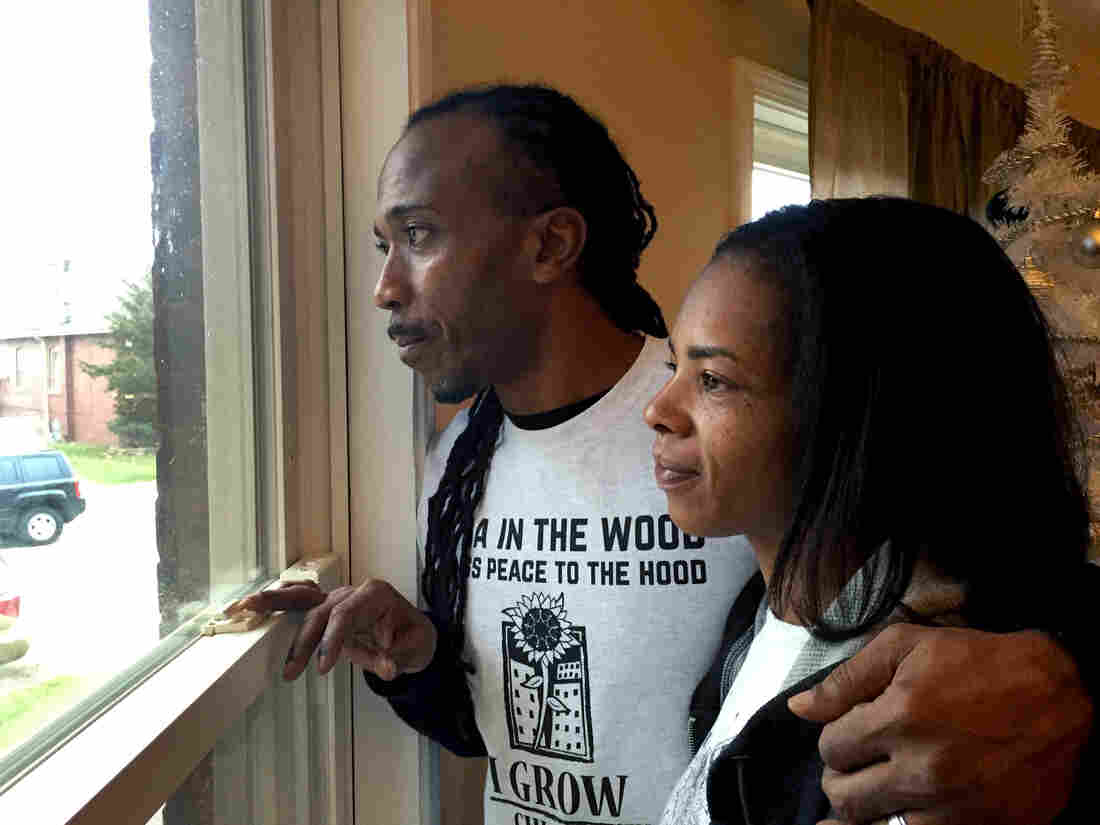 Shango and Karen Johnson at their home in Chicago. Their 9-year-old son, Brendan, is in the third grade. Audie Cornish/NPR hide caption 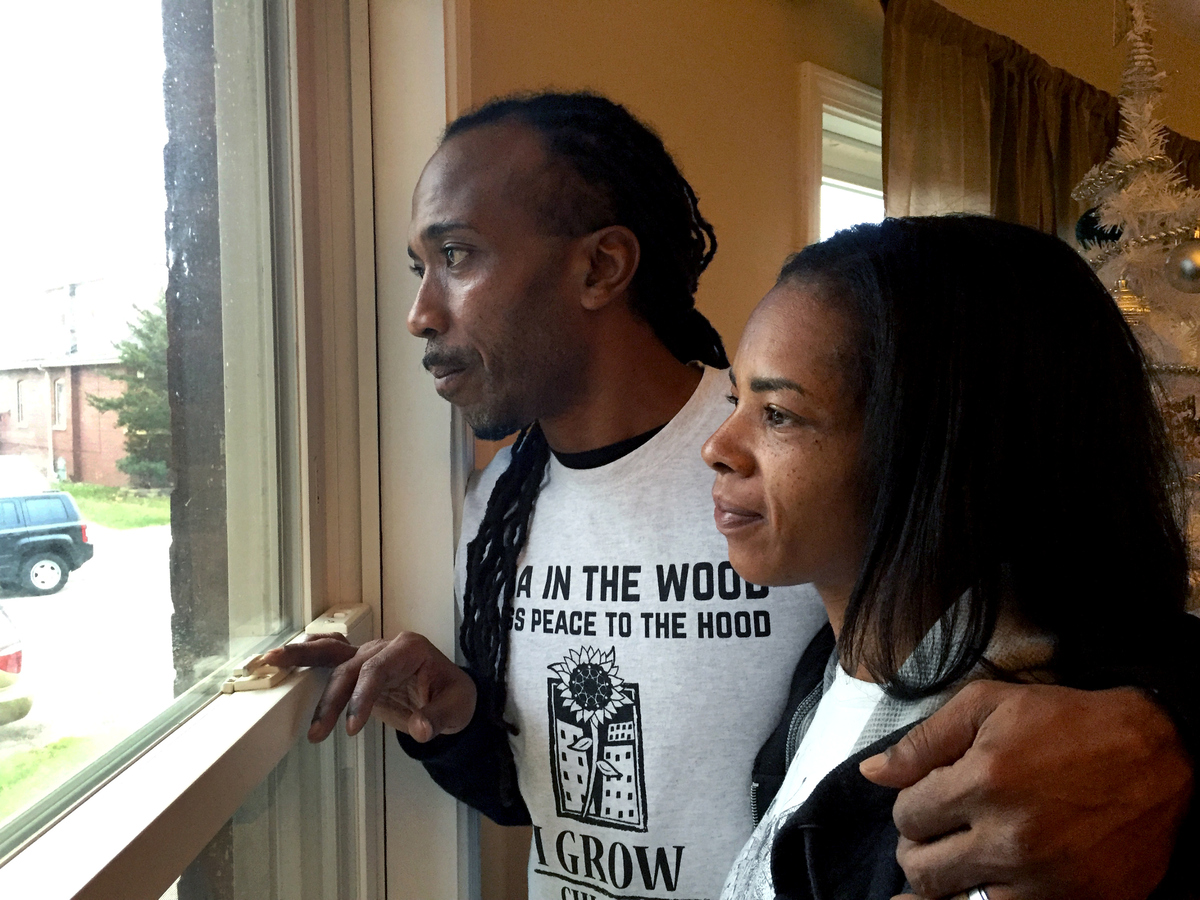 Shango and Karen Johnson at their home in Chicago. Their 9-year-old son, Brendan, is in the third grade.

His mother makes sure he watches kid shows — not the news.

"We generally will wake up, turn on the news, see the first beginning of the news and then turn it off. It gets so depressing. It's just been bombarded with everything that goes on in our city," Karen says.

But even that doesn't mean she can escape news of violence. Last month in Chicago, a 9-year-old named Tyshawn Lee was shot to death. The boy's body was found in an alley the next neighborhood over.

"Brendan was in the car with me and he heard the story and he was asking, 'Why would that happen? Who would do that to a child?' And we just tried to explain to him that there are crazy people in the world. That to me, people have no regard for life anymore," Karen says.

Shango worries his son will start to think that somehow Tyshawn Lee wasn't so much a victim as a casualty of the violence people have come to expect from certain neighborhoods.

When Brendan asked to go to the prayer vigil for Tyshawn, his mother said no.

But as she drove through the neighborhood, Karen says, she found herself taking her son on an inadvertent tour of the dead boy's life.

There was Tyshawn's elementary school. There's the street corner near the alley where he was killed. A few blocks down, the church that held his funeral.

Is a mother ever ready to have this conversation with her child, explaining a senseless death?

"Yeah, I don't want to say its the norm but it kind of is. We used to live in Englewood. We recently moved this past summer so with the violence being so bad how it is in Englewood we would be just driving, and my son would see yellow tape and it could be the construction tape [but] he would automatically think, 'Oh my God, someone has been killed.' So it's like he's almost used to the violence going on in our community," Karen says.

How does she explain the kind of imagery you see in videos of police violence, like with Laquan McDonald? Or does she try to keep it from her young son?

"I would tell him, 'I'd prefer for you not to watch it,' because I don't want it to be embedded in his mind. I don't want to replay that scene over and over again," Karen says.

Our conversation ends there because it's time to go to school.

Later that day, after school, we visit the Beasons.

They live just 7 miles away from the Johnsons in West Pullman, but it might as well be a different Chicago. The street is whisper quiet, with holiday decorations twinkling in front of their home. Jacinda and Dave Beason. Family dinners are where whatever their three sons are thinking — about gang violence in the news, about police shooting videos — gets hashed out. Connor Donevan/NPR hide caption

The house is warm and smells like chopped peppers — Jacinda Beason is preparing chicken chili for her husband, Dave, and their three sons.

Malcolm is 17, with the broad shoulders of a football player. He plays for Lindblom, a selective public math and science academy. His 15-year-old brother, Matthew, attends as well.

The youngest is Marcus. He's 12 going on 13 — we're crashing his birthday dinner, so tonight, he's the center of attention.

Jacinda and Dave say these dinners are where whatever the kids are thinking — about gang violence in the news, about police shooting videos — gets hashed out.

"Our conversations have been, what do you do when you're not a gang banger? You're going to school and doing everything that you're supposed to do. And yet, I still have to prepare my sons — Malcolm, remember when you drive over to Lindblom, remember that that's three black men in a minivan. I don't like having that conversation. But if I don't prepare him to possibly get pulled over, and what you're supposed to do and what you're not supposed to do, and just reiterate that, I would worry," Jacinda says.

She says the conversations they have the most are about what kind of man their boys will grow up to be — and they've taught them four principles to help on that journey.

Marcus knows them all.

"Men of God, men who can think for themselves, a leader not a follower, know right from wrong," he says.

This is how Dave fortifies his sons. They don't want them to feel helpless. For example, they've discussed plans to march in the protests downtown over police-involved shootings in Chicago.

Jacinda says that's because they want their sons to look for solutions.

But her husband knows not everyone in Chicago sees the protests the same way. He has experienced that firsthand — with a colleague at work.

"He was upset about the protests that was happening. And he said the officer had the right to shoot him. 'Mr. McDonald,' I said to him, 'You don't have to worry about an officer killing your son when he goes out of the house. That is a concern, a real concern, in my family.' I don't know if he understood that," Dave says.

Even as they acknowledged the city's problems, Jacinda lists the things they love about Chicago: the museums, their church, their schools. They believe they've built a safe haven for their kids that can withstand the negative headlines.

Dave says it sounds corny, but that he's happy his sons still play Monopoly, have snowball fights and celebrate birthdays with quiet dinners at home.

And faced with the unpredictable — whether a random shooting, or a dangerous encounter with the police — the Beasons carry on.

"You can't go around being afraid. You can't. That's no life. So we pray before we leave, walk out these doors, ask God to help us be an example for his people, ask for protection, and then we live our lives," Dave says.