Accessibility links
Conservatives Call For 'Religious Freedom,' But For Whom? Republican presidential candidates decry what they call a "war on faith." Religious conservatives say they face anti-Christian bigotry. But the rise of anti-Muslim sentiment reveals a double standard. 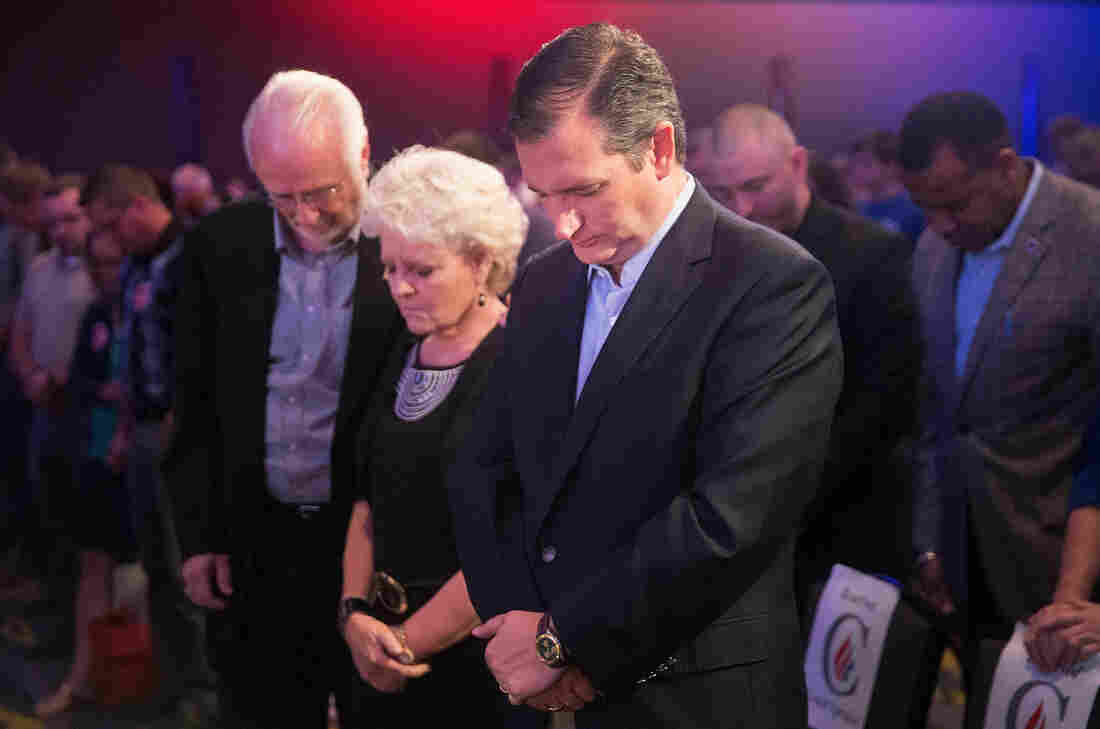 Republican presidential candidate Sen. Ted Cruz prays before the start of his Religious Liberty Rally in Des Moines, Iowa, in August. He is among the Republican candidates who say there is a "war on faith" in America. Scott Olson/Getty Images hide caption

Terrorism and economic woes may be big concerns, but Republican candidate Ted Cruz sees another issue dominating the presidential race.

"I'm convinced 2016 will be a religious liberty election," he said in a recent interview.

Cruz says religious people, devout Christians in particular, are routinely marginalized and harassed for their beliefs, and that such treatment has gotten worse under the Obama administration.

At a rally in South Carolina last month, Cruz invited four people he called "religious liberty heroes" as his special guests, including a young woman who was ordered by a federal judge not to include a prayer in her high school graduation speech and a couple who were sued for refusing to accommodate a same sex wedding at a chapel they owned.

"If I'm elected president," Cruz shouted, "I will instruct the Department of Justice and the IRS and every other federal agency that the persecution of religious liberty ends today!"

Cruz is hardly alone among the Republican candidates in highlighting what he calls "a war on faith in America." Religious liberty is a prominent theme in the campaigns of Mike Huckabee, Rick Santorum and Ben Carson. Even Jeb Bush, hardly a favorite of evangelicals, has established a "Religious Liberty Advisory Council."

The Supreme Court's legalization of same sex marriage and the contraceptive mandate in the Affordable Care Act have brought religious freedom concerns to the forefront, but many of the struggles are decades old, such as whether prayers or other religious activities can be permitted in official settings.

The First Amendment bars Congress from passing any law that suggests an "establishment" of religion but also prohibits legislation that limits its "free exercise."

"There is no war against the legitimate exercise of your rights as a religious person to express yourself," says Barry Lynn, executive director of Americans United for Separation of Church and State. "[The problem] is when you decide you want the government to bless it, fund it, or in some way support your particular ideas."

Conservatives, however, argue that banning school prayer and other activities violates the "free exercise" provision and thus constitutes an infringement of religious freedom. 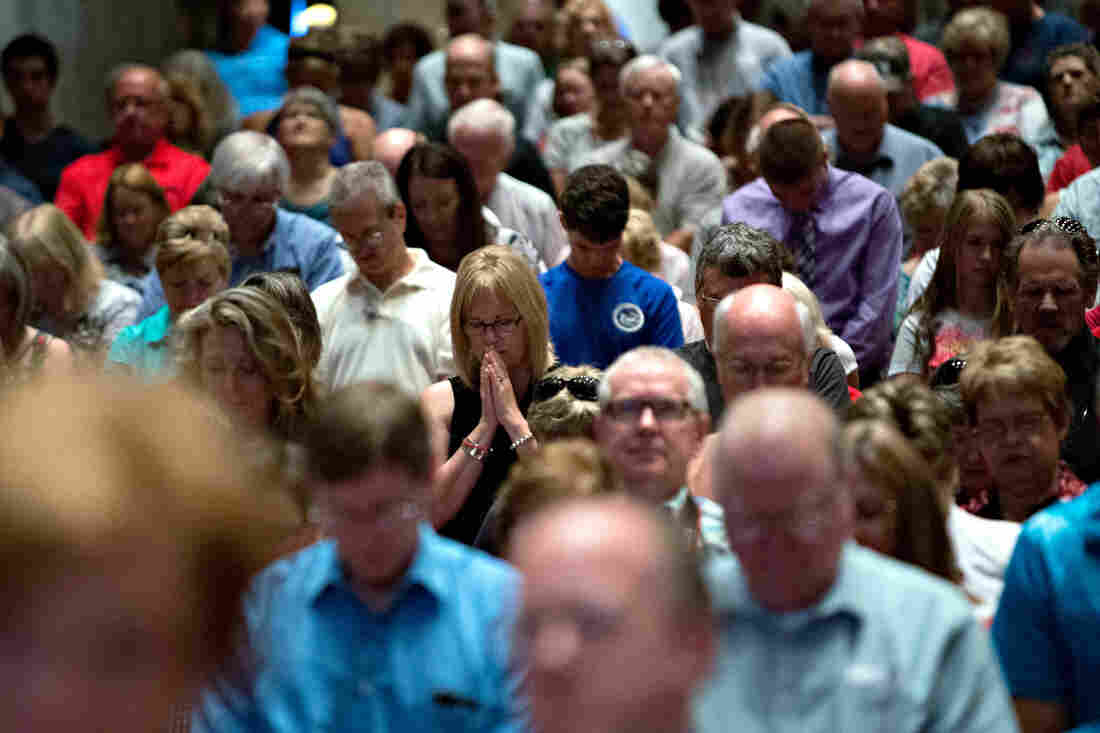 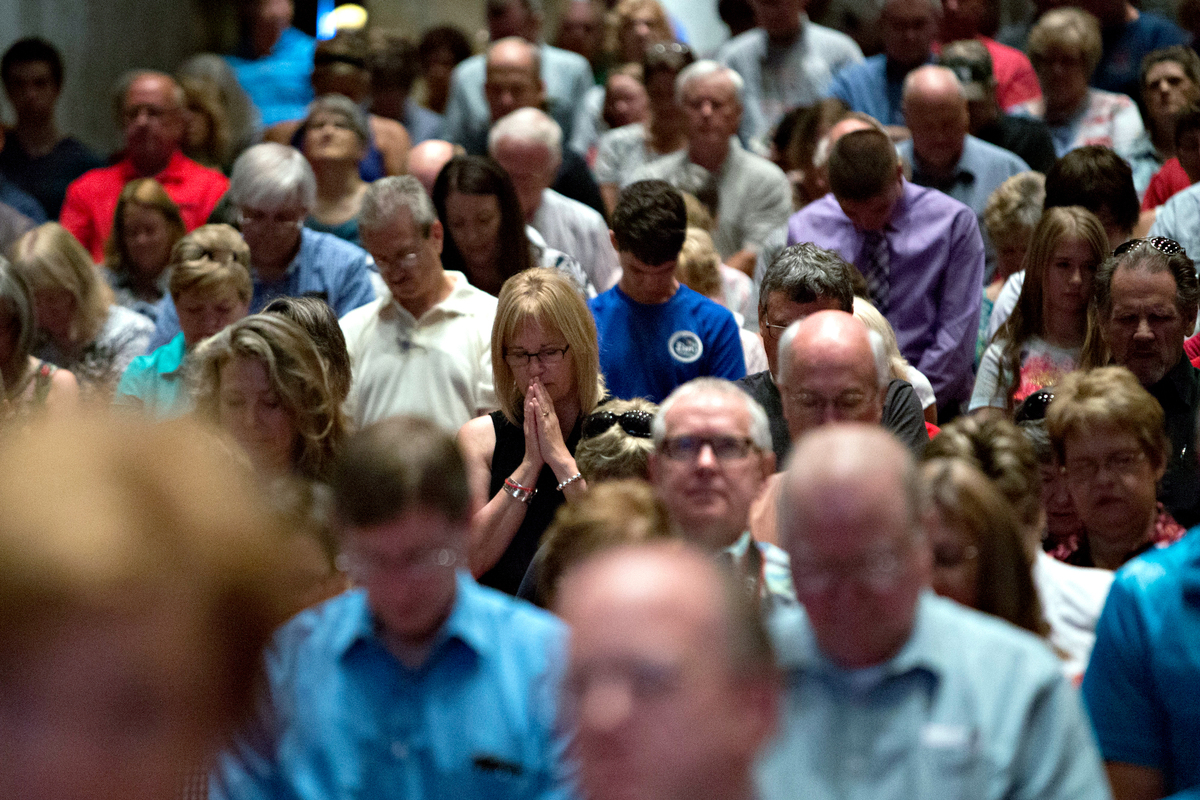 Attendees pray during the Family Leadership Summit — an event sponsored by the conservative Family Leader organization — in Ames, Iowa, in July.

"It's this idea of trying to push religion to the private square," says Asma Uddin, legal counsel at the Becket Fund for Religious Liberty, a law firm that has supported numerous religious groups. "To the extent that it comes into the public square, it can't have any real impact. Religion is OK, [but only] as long as it doesn't really affect anyone or anything."

It's difficult for evangelicals to argue that Christians in America suffer like they do in the Middle East or in other parts of the world, but they say there is a softer persecution in the United States.

"What happens," says Tony Perkins, president of the conservative Family Research Council, "is that when people see someone denied the freedom to exercise their faith, they feel less secure in their own rights, so they begin to step back. They may not personally encounter it, but they feel like at any moment they could ... so they stop exercising it."

The Challenge Of Anti-Muslim Sentiment

So can a political campaign gain traction today if it champions the argument that religious liberty in America is in jeopardy?

One complicating factor is the rise of anti-Muslim sentiment in the country, a development that weakens the religious freedom cause.

For Same-Sex Marriage Opponents, The Fight Is Far From Over

On Popes, Swearing In On Bibles And Religion In Public Life

Uddin of the Becket Fund for Religious Liberty is a Muslim and has found that some of the religious freedom advocates she has met have a double standard when it comes to Islam.

"There is a problematic element among certain segments of the population," she says, "that seem to be very much in favor of religious liberty, but only for Christians and explicitly not for Muslims."

She says she often encounters anti-Muslim sentiment in her work, as she did recently when speaking at a "Stand Up for Religious Liberty" rally.

"I went up to the podium and said, 'I'm here as a Muslim American supporting your religious freedom, but I fully expect that in return you support mine,'" she says. But the response from the crowd, she recalls, was "hundreds of people just silent and looking at me"

The Need To Defend Religious Freedom For All

Such prejudice bothers some advocates of religious freedom, including Russell Moore, president of the Ethics and Religious Liberty Commission of the Southern Baptist Convention.

Robert George, the McCormick Professor of Jurisprudence at Princeton University and a leading lay Catholic intellectual, is also outspoken on the need to defend religious liberty for people of all non-Christian faiths, including Islam.

"It's scandalous to me when members of a community say, 'We don't want a mosque in our town, because the Muslims are terrorists,'" George says. "The vast majority of Muslims are not terrorists or sympathizers of terrorists. They want the same things for themselves and for their children that Christians want, that Jews want, that Hindus want, that all of our fellow citizens want."

In the aftermath of the Paris and San Bernardino shootings, the fear of more attacks has inflamed anti-Muslim sentiment, fueled in part by Donald Trump and others who are highlighting the threat of "Islamic terrorism." Those candidates who have emphasized the struggle for religious liberty as a mobilizing cause, from Cruz to Jeb Bush, have either ignored Trump's repeated anti-Muslim comments or condemned them.

For some conservatives, however, recent events may bring a decision point. They may need to choose between opposing Islam and advocating for religious freedom. To wage both fights at the same time is likely to become increasingly awkward.