Accessibility links
4 Reasons Trump's Supporters Aren't Going Anywhere — And Why The GOP's Worried Trump supporters express deep devotion for their candidate, more than any other Republican running for president — and that could mean big problems for the party next year. 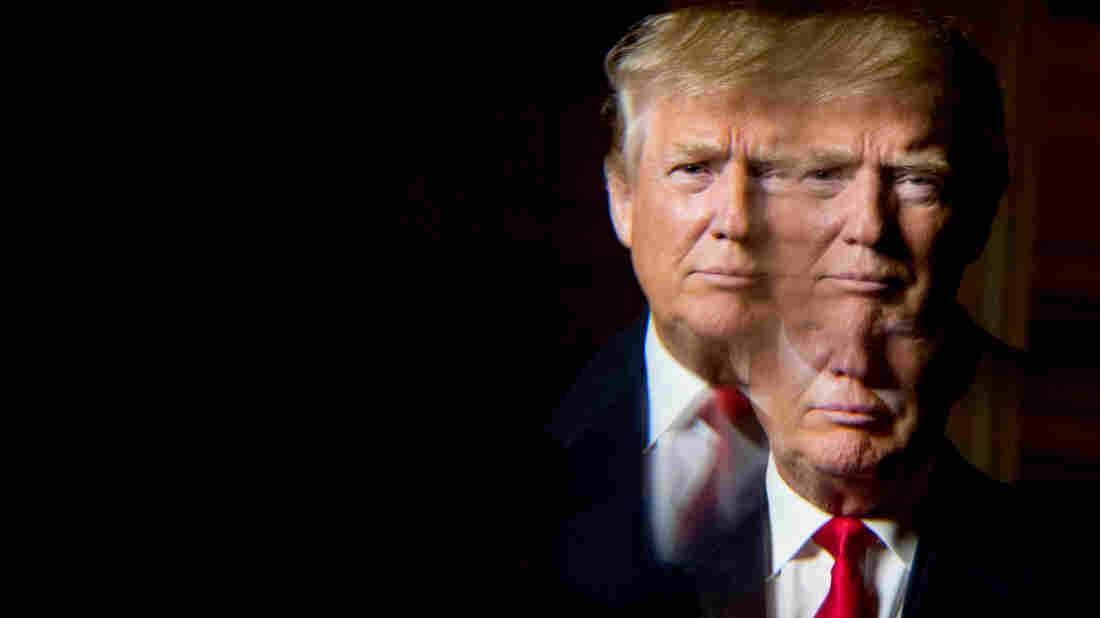 Donald Trump seen in a reflection while posing for a portrait following an interview with The Associated Press. Andrew Harnik/AP hide caption 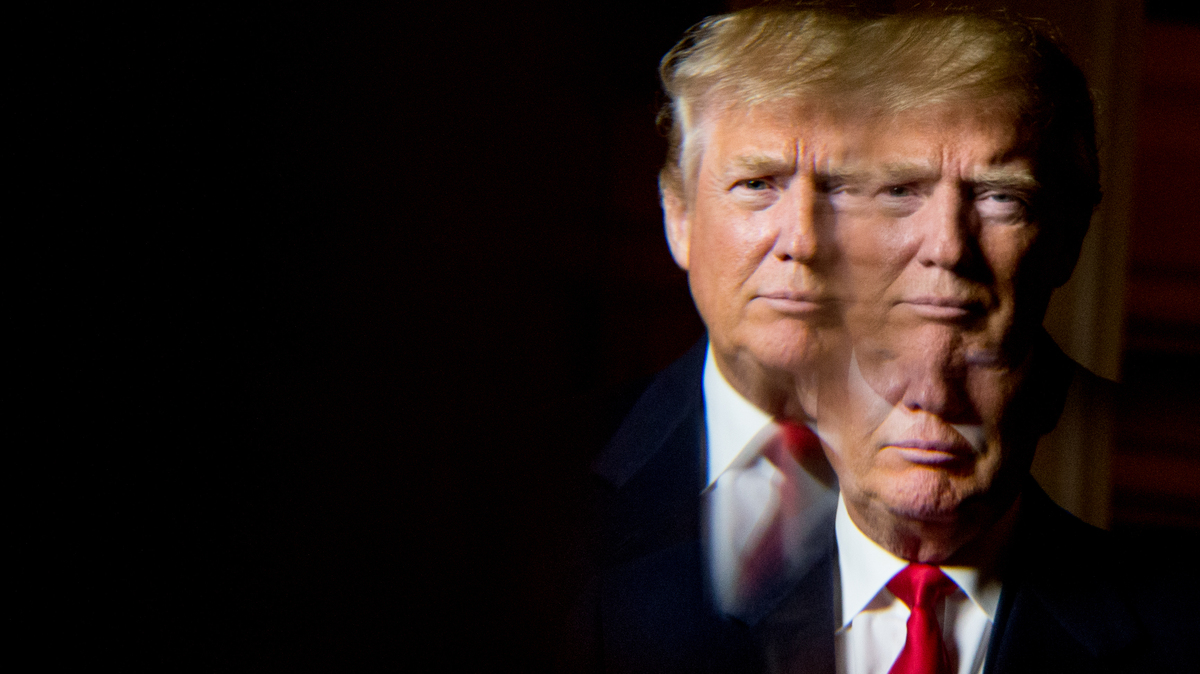 Donald Trump seen in a reflection while posing for a portrait following an interview with The Associated Press.

Editor's Note: Some readers might find some of the language below offensive.

Donald Trump has made his most outrageous statement yet in a string of beyond-the-pale utterances.

His plan to temporarily stop all Muslims from coming to the U.S. was condemned across party lines as being xenophobic, un-American and detrimental to U.S. national security. But, just like every other outrageous thing Trump has said or done, his poll numbers went up and his supporters have cleaved even more passionately to his candidacy.

Here are four reasons why:

1. Trump supporters don't trust the establishment. At All.

To them, the establishment is everyone they think is patronizing or condescending to them. They hate the Republican establishment. They think the mainstream media sees them as bigots when, in their view, all they want to do is feel safe and see America restored to its former greatness.

In a focus group assembled by Republican pollster Frank Luntz on Wednesday night in Alexandria, Va., 29 current and former Trump supporters said they thought a temporary halt in Muslims coming to the U.S. was a common-sense response to terrorism. They repeatedly dismissed or explained away all of the attacks on Trump and all of the "offensive" things Trump has said. They said:

-"He's not a politician."
-"He's not poll tested or handled."
-"He says what's on his mind, and sometimes that's not politically correct."
-"He's just being funny or outrageous to command the spotlight."
-"He's smart like a fox."

These Trump supporters are devoted to him and deeply invested in his candidacy. They seem to view every attack on him as a diss to them. The focus group put together by Luntz was almost completely white, a reflection of Trump's base, but it included nine women, and all of the participants had some college or higher education. They worked in fields including government, education, law, sales and realty — a little different from the stereotype ascribed to his supporters as downwardly mobile or non-college educated.

This is both a reason Trump supporters like him and a practical asset for his campaign. Trump isn't going anywhere, because he can afford to stay in the race as long as he wants. And he's spent less than $250,000 on advertising —compared with $33 million by Jeb Bush's campaign and superPAC. Trump's supporters love that.

3. They believe what he says.

Trump supporters are predisposed to believe him and not the mainstream media, which has no credibility with these voters. Large numbers of people in Luntz's focus group said they believed Trump's claim that thousands of Muslims in New Jersey celebrated the destruction of the Twin Towers in the Sept. 11 attacks.

They also largely agree with Trump that President Obama was not born in America, and many questioned whether he's Christian.

GOP leaders know Trump is a stain on their party; the only question is whether it's washable or indelible.

The animus toward Obama was intense — and ugly.

One focus group participant said, "I wouldn't urinate on him if he was on fire."

Another said, "I would not only not piss on him if he was on fire — I'd throw gas on him."

4. Trump supporters are not ordinary Republicans.

It's hard to overstate how deeply alienated Trump supporters are from mainstream politics. They are viscerally anti-establishment. They feel the political system is broken. Since the recent terrorist attacks, they're even more anxious about the country. Several people Wednesday night said President Obama "cannot keep us safe."

They see Trump as a strong leader who knows how to get things done. They view the Republican leadership's attacks on Trump's proposal to ban Muslims as insulting and ineffective.

These are Trump supporters first, Republicans second. When asked whether they'd support Trump if he ran as an independent third-party candidate, even if it meant paving the way for Hillary Clinton to be president, one man said, "Maybe it's time to blow the Republican Party up."

Why should the Republican Party worry?

Answer: all of the above.

This week, a large number of Republican leaders criticized Trump in a way they haven't done before. Many Republicans agreed with Democrats that Trump had crossed a line with his proposal for a temporary ban on Muslims.

But they also believe that Trump poses a danger to the GOP. They think a Trump nomination would be a nightmare for the party, and not just at the presidential level, but down the ballot, too.

In several polls taken since he rolled out his plan for a ban on Muslims coming to the U.S. (Fox, CBS/New York Times, Winthrop) Trump's numbers have gone up. As the Luntz focus group showed, straightforward attacks on Trump don't work. GOP leaders know Trump is a stain on their party; the only question is whether it's washable or indelible.

Congressional Republican leaders were firm in their denunciation of Trump's idea, but the reactions of the Republican candidates were mixed. Candidates polling in the single digits, like Jeb Bush or Lindsey Graham, condemned him; Marco Rubio and Ted Cruz were more careful, saying they disagreed with Trump's proposal, but they wouldn't go so far as to say Trump was unfit to be president.

As a matter of fact, the candidate who's seen the most growth in his support is Cruz , who has now surpassed Trump in at least one Iowa poll. And he has been careful to avoid criticizing Trump. He's having some success positioning himself as the natural inheritor of Trump's support should Trump fade or falter. At the Luntz focus group, Cruz was the top pick for second choice.

Where is this heading? Straight to Vegas.

Next Tuesday night, the GOP candidates will debate in Las Vegas. They will probably be asked whether they still abide by the pledge they took to support the Republican nominee — even if it's Trump.

So far, only Cruz and Carson have reaffirmed their intention to vote for Trump, if he's the nominee. Bush has said he will vote for the Republican nominee, but continues to insist it won't be Trump. The debate will show whether Republican candidates are willing to accept what many Republicans privately say is toxic demagoguery in order to avoid alienating Trump's supporters.

And they have good reason for concern. One poll showed 68 percent of Trump's supporters say they'd stick with him if he ran as an independent candidate, a possibility Trump has begun floating again.

The Republican establishment thinks that's a surefire way to elect Hillary Clinton, but the Luntz focus group participants who said they'd support an independent Trump bid disagreed with that calculation.

They said if Trump ran as an independent, they were certain he would win.