Accessibility links
Donald Trump Has Escalated His Rhetoric. So Has The Press Covering Him As the front-running GOP presidential candidate's controversial pronouncements multiply, the reporting, commentary and editorials from major news outlets have taken on more urgency.

Donald Trump Has Escalated His Rhetoric. So Has The Press Covering Him

Donald Trump Has Escalated His Rhetoric. So Has The Press Covering Him 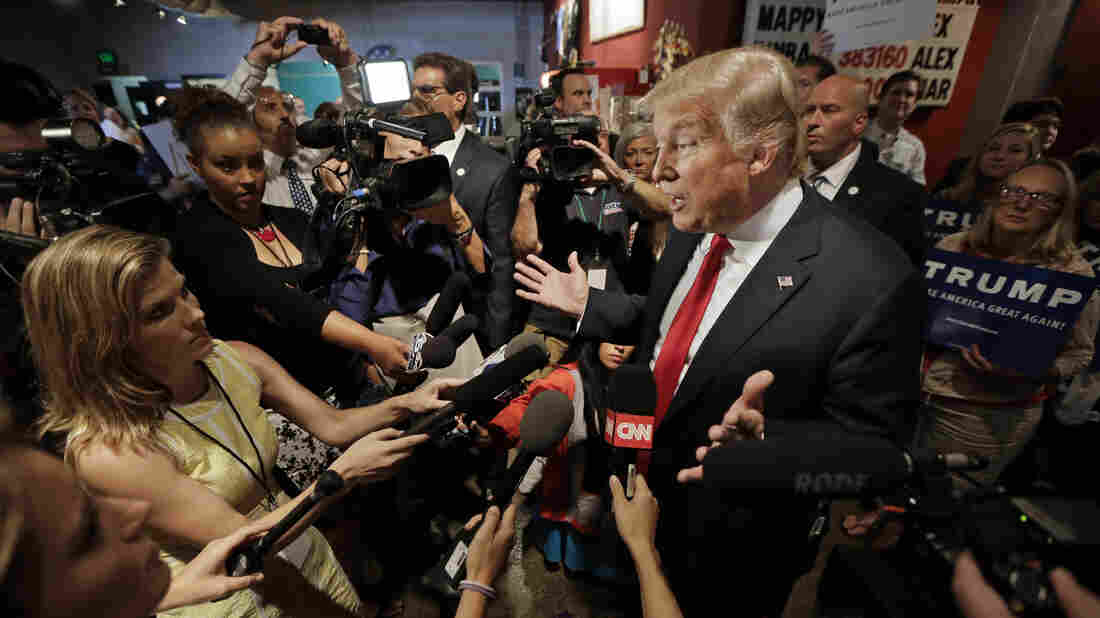 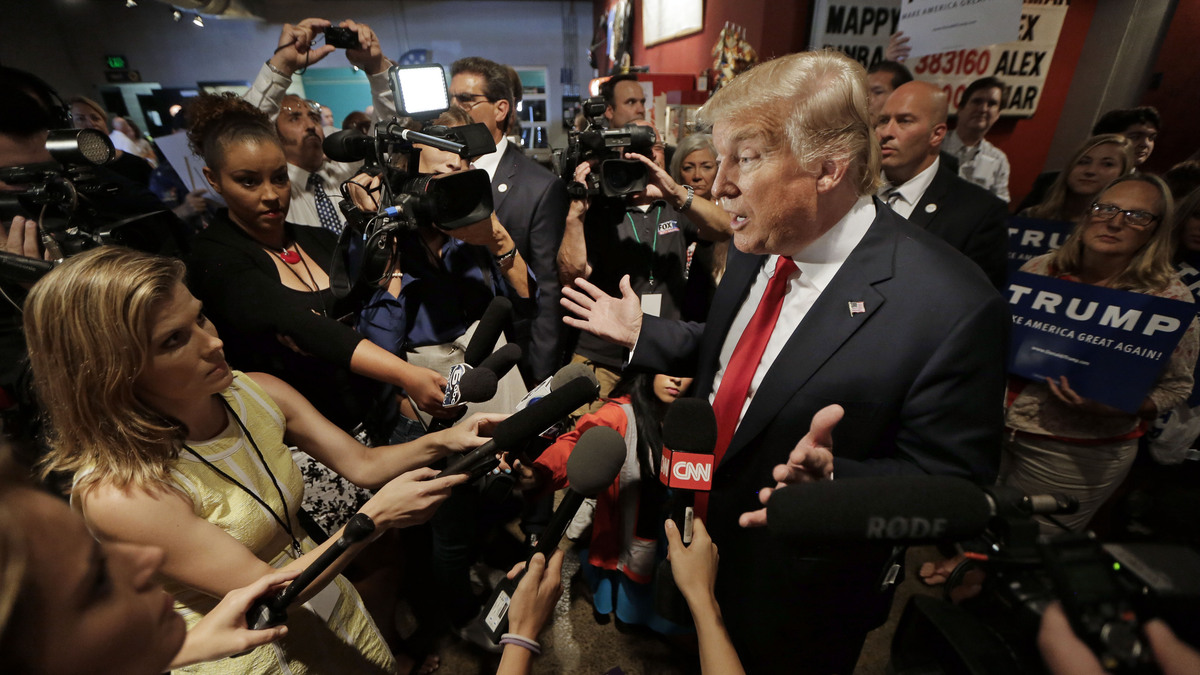 Donald Trump has changed the rules of engagement with the media and all on his own terms, driving his campaign through a sustained barrage of interviews on major TV shows, staging huge televised rallies and picking fights with his opponents on social media.

The media have been along for the ride, thankful for the ratings, reveling in a colorful character charting an unpredictable course atop the polls, and fearful of missing what might come next.

Yet as Trump's rise has been accompanied by, and even reliant on, pronouncements and positions that are increasingly alien to mainstream American thought, the reporting and commentary of journalists from major news outlets have taken on more urgency. 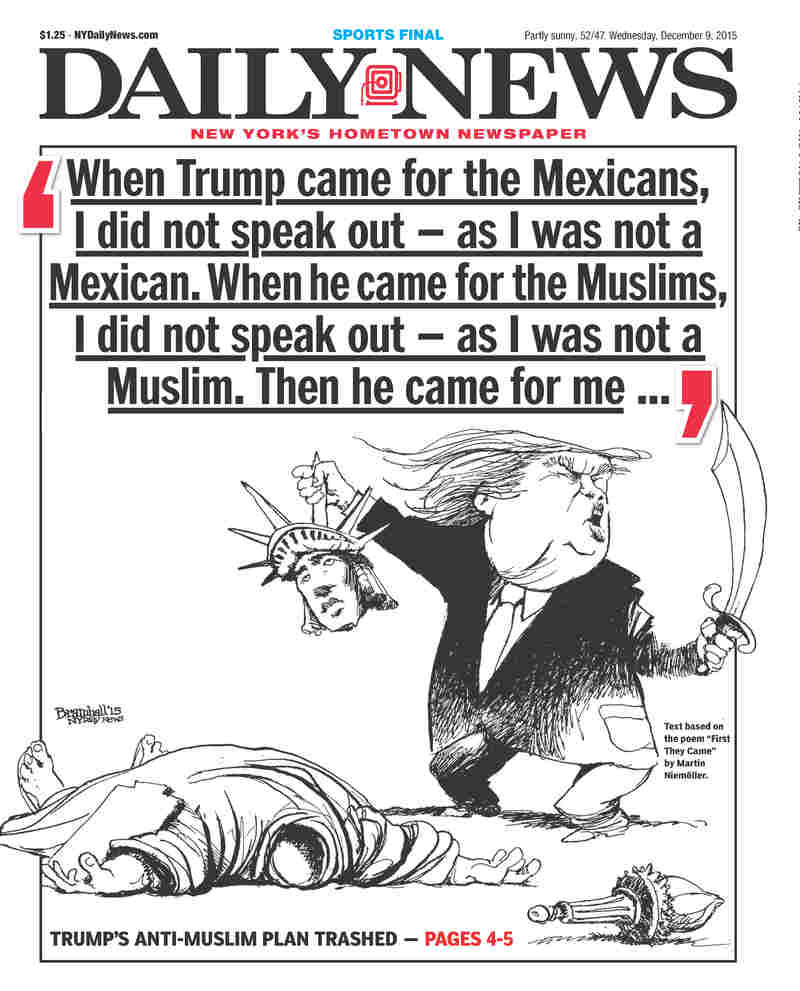 "We are, right now, sort of in a very strange time in this country where there are a lot of issues that are at the boiling point," said Stephen Henderson, editorial page editor of the Detroit Free Press. He folded Trump's rhetoric in with a basket of issues that are agitating his readers, including gun violence and gun control, the threat of terrorism, and the tension between police and African-Americans in many major U.S. cities.

The moment, Henderson said, "calls us at the newspaper — and particularly on editorial pages — to a higher pitch right now because things seem so tense and the outcomes seem so freighted with history and cultural importance."

Tabloid newspapers have perhaps led the way in objecting to Trump's proposal to ban all Muslims from entering the country: The New York Daily News published a front-page cartoon depicting Trump decapitating the Statue of Liberty with a scimitar, ISIS-like, while the Philadelphia Daily News ran a front-page photo of Trump holding a single arm aloft at a 45-degree angle and the headline: "The New Furor." (The homonym for Hitler was entirely intentional.)

More typically measured journalists have sharpened their tone as well. Retired NBC News anchor Tom Brokaw earlier this week broadcast a very unusual and very pointed editorial against Trump's stance on Muslims. And he did it on the NBC Nightly News, the most-watched television newscast in the country.

"Trump's statement, even in a season of extremes, is a dangerous proposal that overrides history, the law and the foundation of America itself," Brokaw warned viewers. "In my lifetime alone, we have been witness to the consequences of paranoia overriding reason."

Inspired by the sizable Islamic population that lives in greater Detroit, the Free Press published a front-page editorial this week titled "We Stand Together: We Are Better Than Bigotry" — directly denouncing Trump. Not all readers agreed. Some Michiganders told the paper's journalists they believed Trump was saying out loud the things many people believed privately.

The Free Press last published a front page editorial during the recent global financial crisis, urging Washington to bail out the U.S. automakers so important to that region's economy. Before that it had been decades.

BuzzFeed Editor-in-Chief Ben Smith sent a memo to his news staffers saying the company's guidelines against political partisanship on social media did not prevent them from calling Trump "a mendacious racist."

"Trump is operating far outside the political campaigns to which those guidelines usually apply," Smith wrote. "He's out there saying things that are false, and running an overtly anti-Muslim campaign. BuzzFeed News's reporting is rooted in facts, not opinion; these are facts."

These are strong declarations about a leading candidate by mainstream journalists without parallel in recent decades.

Cable news shoutfests and partisan websites trade on overheated rhetoric. We've come to expect such journalistic passion and opinion to surface far less frequently in the non-ideological (or the not explicitly ideological press) and only then during crises that hit close to home.

During Hurricane Katrina, for example, the New Orleans Times-Picayune reported intensely and heroically but also as an advocate for people displaced there. Yet the amped-up coverage of Trump occurs as there's been an increasing willingness by typically staid outlets to raise their voices. In March, The Indianapolis Star devoted its entire front page to an editorial attacking the state's new governor for giving legal cover to those businesses that wanted to discriminate against married same-sex couples. Last week, The New York Times ran a front-page editorial for the first time in 95 years to call for a ban on sale of certain assault-style weapons in response to a series of deadly mass shootings.

Trump's proposal for Muslims appeared to create a crisis of conscience in much of the mainstream press, stirring echoes, as Brokaw and others have said, of past shames. And the press could have arguably reached the same conclusion earlier — Trump unrepentantly insulted Mexican immigrants as rapists, demeaned the looks of Republican presidential rival Carly Fiorina and mocked the physical handicap of a reporter for The New York Times, among many other instances.

Many news organizations are simultaneously clamoring to win audiences with him, seeking the ratings and clicks pixie dust that his presence affords. Trump often calls in to major television shows, rather than appearing in studio or by satellite. Betsy Fischer Martin, NBC's former managing editor for politics and the former executive producer of Meet the Press, says that most television interviewers have failed to press Trump on the implications and specifics of his policies. Allowing him to appear remotely makes it much easier for him to filibuster, she said.

"People can press [more] on some of those specifics and not just let him get away with sort of grandiose prescriptions for something," Martin said. "It seems like he's just given a few minutes to come on and say what he wants to say, and then hopefully he'll come back the next week."

Surprised About Donald Trump's Popularity? You Shouldn't Be

Trump On His Plan To Ban Muslims: 'Not Politically Correct, But I Don't Care'

And he said reporters should continue to present the nature of the candidate and the campaign — not simply note it once, as no reader sees every story. "Today's outrage might get washed away by next week's," Ginsberg said.

But Ginsberg cautions that journalists should weigh carefully what they seek to accomplish, asking whether they want to serve as watchdogs or to knock a candidate, in this case Trump, out of the race. Ginsberg says he holds the former aspiration.

Regardless, he says, Trump wears the media's criticism as a badge of honor.

"For his core audience, he's able to feed this idea that the institutions or the establishments, particularly of Washington, are aligned against him, and that feeds into a perception that's long been there that he makes excellent use out of."

And indeed, the backlash against Trump in the press has not been mirrored in the polls of the likely Republican electorate, for whatever they're worth this many weeks before the voting starts in Iowa, New Hampshire and the rest of the primaries. Trump has actually seen a slight rise in his standings since the controversy erupted early this week.