Accessibility links
Beyond His Tenure, Holder Hasn't Left The Civil Rights Fight Reflecting on his six years in office, the former attorney general talks with NPR's Michel Martin about what critics have called the most divisive administration and what's in store for him next. 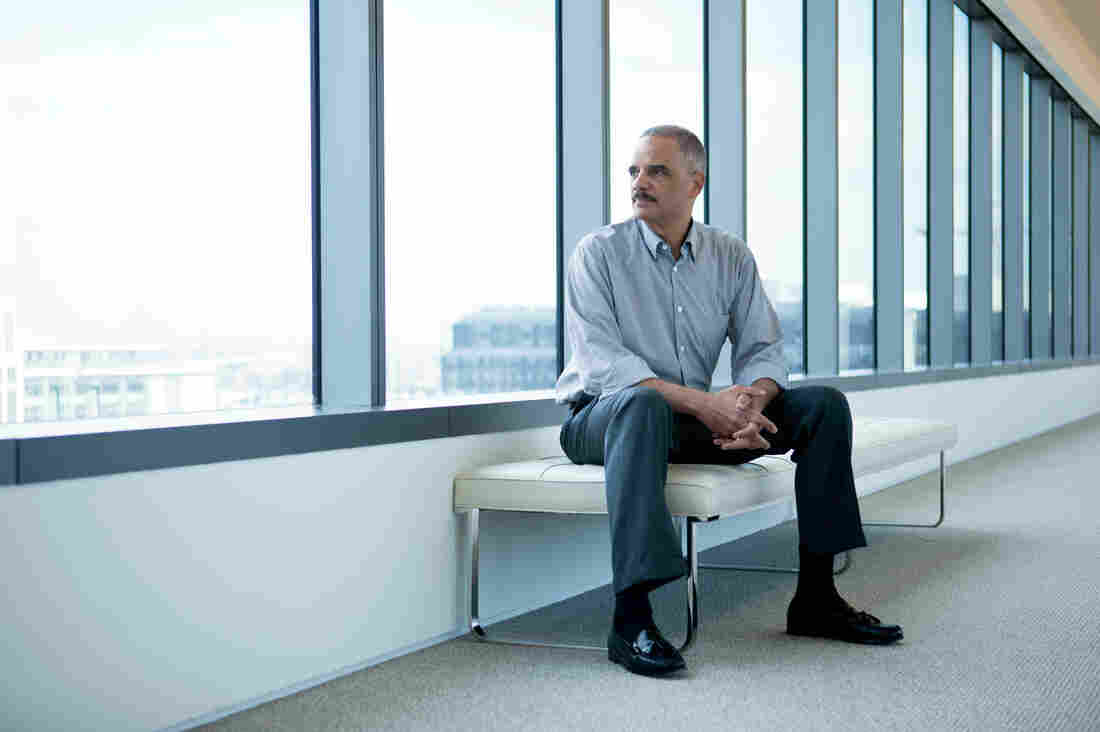 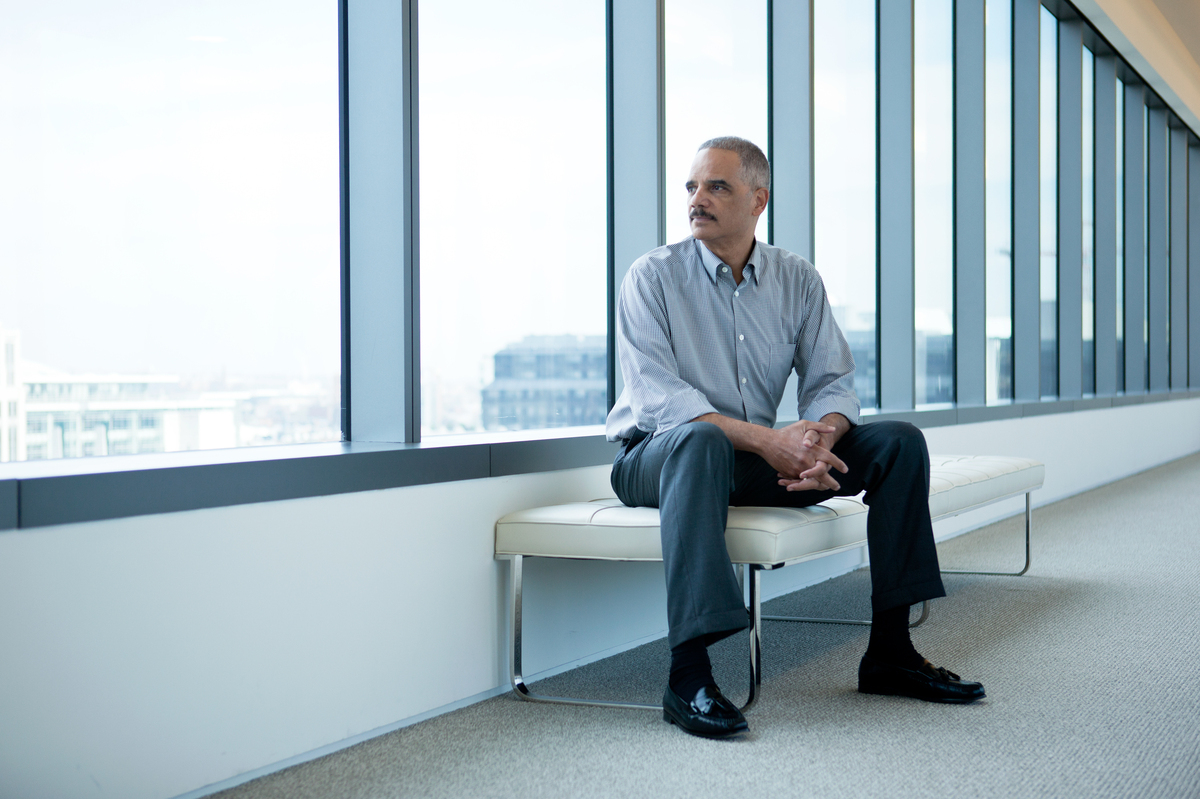 Former Attorney General Eric Holder poses for a portrait at CityCenterDC on Friday.

Former Attorney Gen. Eric Holder's career has been a series of firsts.

As the first African-American to serve as this country's top law enforcement official, he came into office in 2009 promising to rebuild the Justice Department's Civil Rights division.

There, he aggressively enforced voting rights, supported same-sex marriage and became a lightning rod for criticism from conservatives. In fact, Holder was the first sitting cabinet member to be held in contempt of Congress in 2012 when he failed to deliver documents and testimony related to the "Fast and Furious" gun-running operation in Arizona.

With The End In Sight, Holder Reflects On His Legacy

His six-year tenure marked a first in another way: It was the longest term between an attorney general resignation and the time a successor was confirmed.

After stepping down as attorney general earlier this year, he returned to private practice as a partner at the law firm Covington & Burling. NPR's Michel Martin sat down with him to talk about his life and work since leaving office.

On the lengthy period between his resignation and naming a successor

I think it's an indication of the dysfunction we unfortunately see in Congress. You have to remember the Senate is controlled by a party that didn't like me – doesn't like me – an awful lot and yet they didn't have the ability to pull themselves together to confirm my successor. They had a bunch of extraneous issues that they had to try to work their way through that had absolutely nothing to do with the qualifications of Loretta Lynch to be attorney general. And I think it's a sad commentary on where we stand in Washington D.C. now. ... I think the Republican Party itself is divided in almost an existential way.

On the role race has played in this presidential administration

I think for some that was a component of the opposition but I think the larger part of it was political – and not even political so much as ideological. I think certain people on the other side identified this president as an effective progressive voice, and were determined to oppose him, fight him, wherever they could and that necessarily mean me at the justice department. ...

I think the toxicity is really a function more of ideology than race and the hyper-partisan atmosphere in which we now operate in Washington D.C. 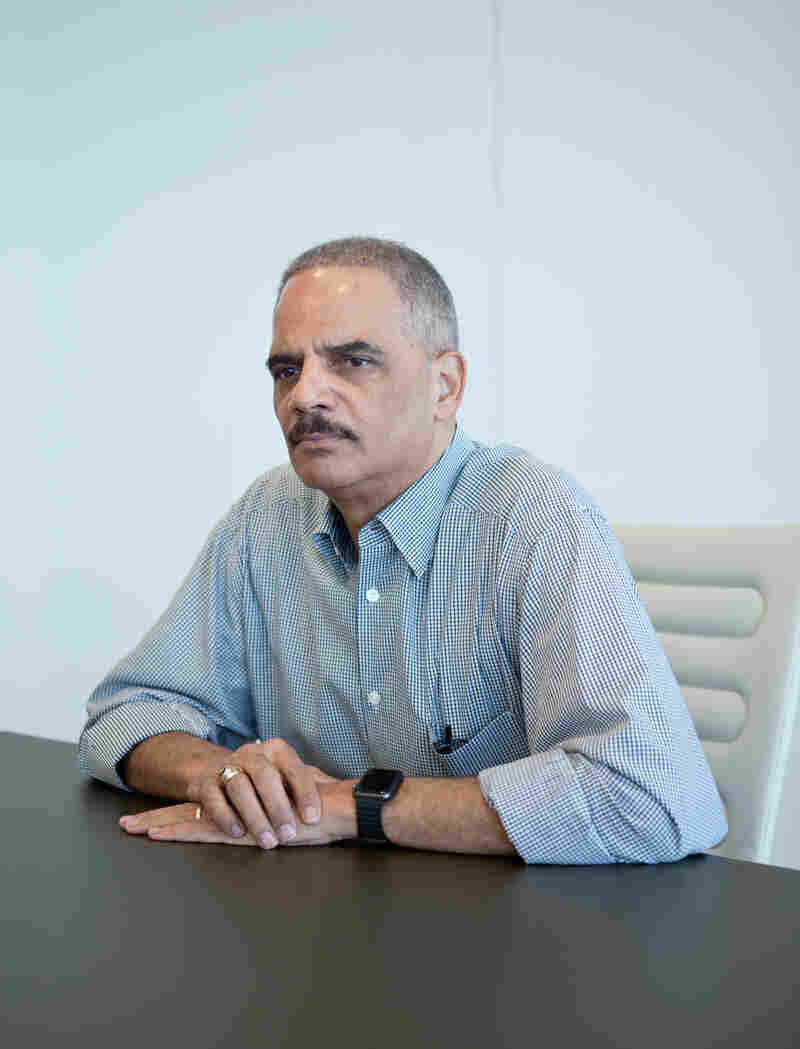 After stepping down as attorney general earlier this year, Holder returned to private practice as a partner at the law firm Covington & Burling. Jun Tsuboike/NPR hide caption 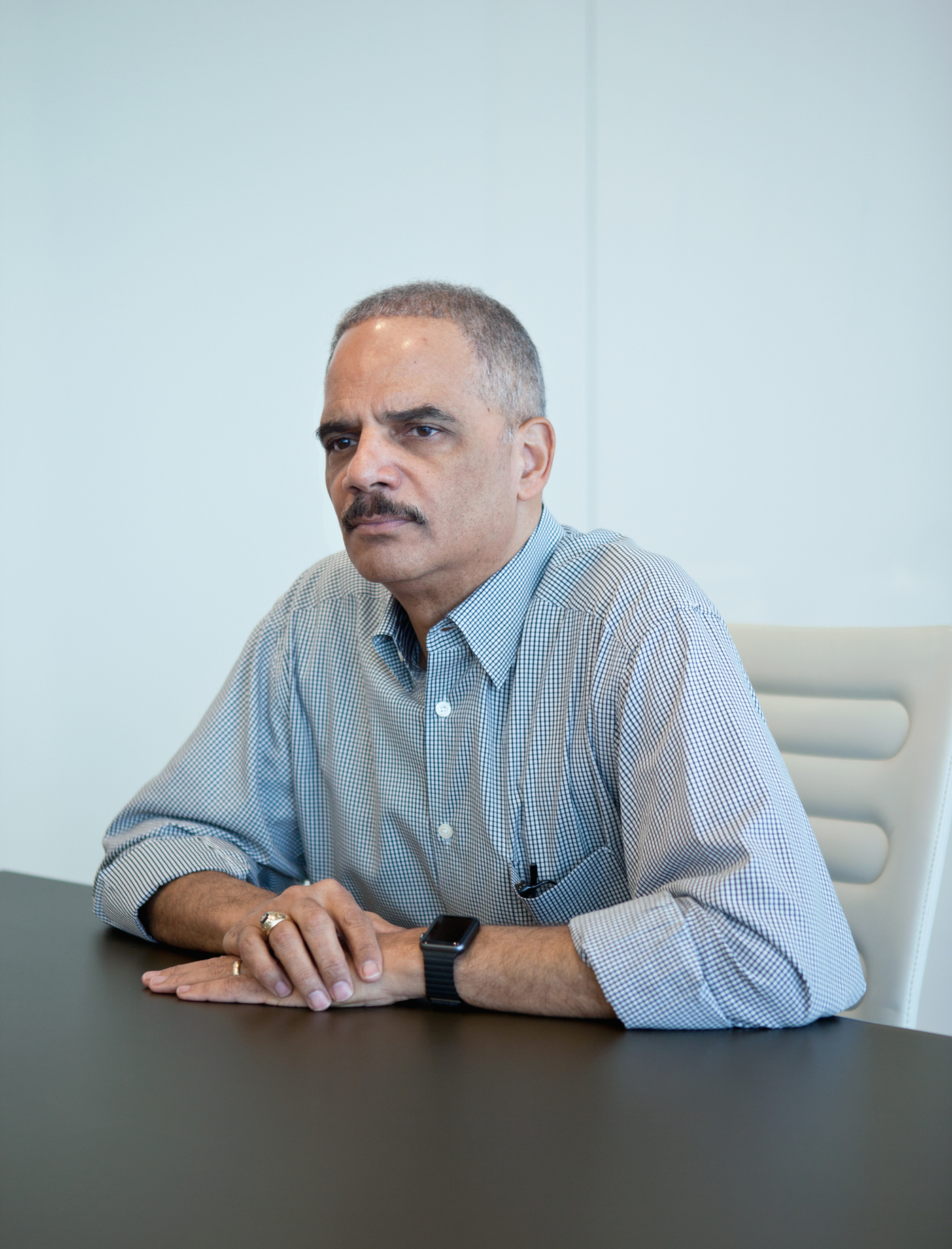 After stepping down as attorney general earlier this year, Holder returned to private practice as a partner at the law firm Covington & Burling.

On the president and himself being called divisive

The notion that Barack Obama is among the most divisive people or presidents that we have seen is utter nonsense. It's utter nonsense. This is a president who came into office with a desire to unite people. Let's think about it like the stimulus package and how he tried to construct a package at the beginning trying to deal with the greatest financial crisis since the Great Depression, reached out to Republicans, Republicans insisted that the package had to contain a certain amount of tax cuts — alright he gave in there — and then as I remember, not one Republican voted for the package. And that's just one example, that's kind of the way things started. I think this president, and I think I certainly did as attorney general, we extended our hands to try to work through things and were really kind of met with unprincipled opposition. It was all political. I mean, again, you know, their leadership said we're gonna try to make this guy a one-term president.

I think it's ideologically driven. There is a real desire to — I think a fear — a desire to stop this progressive movement that I think really is starting to take hold in this country and that challenges a lot of what they consider to be the norm, and I will say, almost arrogantly believe what is their right to govern in a certain way. This nation is changing, and the Obama coalition I think reflects better the 21st century than their governing philosophy.

I sat with her in the Situation Room. I have seen her deal with the issues that are going to confront the next president. She's got the necessary experience, she's got great judgment. She will come to the job on day one ready to do the job in a way that I don't think anybody else who's running for president on either side has the ability to do.

On what the rest of his career looks like

When I left, we had a White House ceremony and I said I would never leave the fight and that's still the way I feel. I'm here at a law firm that does a whole variety of things on the commercial side but my life is still going to be focused on dealing with voting rights issues. Our firm filed a brief against the state of Alabama for what they have tried to do with regard to voter disenfranchisement. I'm working on the creation of an institute, it's going to deal with civil rights issues. And I think I'll also find places in which I'll speak out about topics, hopefully using some of my notoriety to put a spotlight on issues. Actually I'll have an ability to speak in a way that's maybe a little more liberated than I could before. I'm not a member of an administration, I don't have to worry about administration positions and policies. I can speak really more from the heart.