Accessibility links
'Map' Is An Exquisite Record Of The Miles — And The Millennia Map: Exploring the World is a new collection of maps, selected by an international panel of cartographers, academics and collectors, spanning everything from the Aztecs to modern digital imaging.

The other day, a beautiful brick landed on my desk — a thick, fat, illustrated book, called Map: Exploring the World.

I used GPS and went about a mile from our studios, to meet one of the men behind this work, John Hessler, in his native habitat: Deep underground, in the Library of Congress's Madison Building. It's the largest map collection in the world — five and a half million maps live here, and Hessler is one of the mapkeepers. He wrote the guide to this new book, which covers 3500 years of maps. 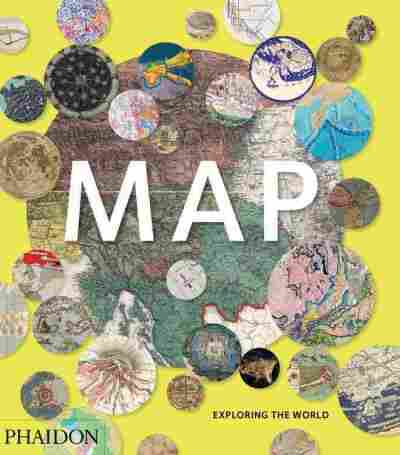 The vault we're standing in is a city block long, entirely filled with drawers, shelves, and globes. "Anything cartographic resides in this room," Hessler says. Ironically, it looks like it would be easy to get lost here — but, Hessler jokes, "we could give you a map to find your way out."

Hessler pulls out some ancient, beautiful maps from the collection at the Library of Congress; documents that show how people related the world over centuries and across continents, beginning with a 500-year-old map from what is now Mexico.

"This is known as the Oztotipac lands map. This was drawn by Aztec scribes in 1539, so this is a real indigenous American map," Hessler says. The Oztotipac lands map is in four parts, three of which look like a modern residential plan, with little tick marks along the side to show the dimensions of the property. "We see the earliest cartography that we have really goes down into land ownership ideas," he adds.

Hessler pulls out a medieval sailing chart, beautifully ornamented with camels and birds, dragons and elephants. "Those are the elements that really let us inside the mapmaker's mind — the thing that separates all the different mapmakers apart is really their style," he says. "And what they decide to leave out, because that's just as important on a map."

Most maps aren't to get from point A to point B. Most maps are about how we as a civilization, as different cultures, perceive our lives in this box that we live in.

Next, he unfurls an 18th-century scroll showing China's Yellow River. "What this map is showing is tea shops," he says. It's a very different style of cartography from the other maps we've looked at, he adds. "A scroll obviously doesn't have the ability to lay itself out or orient itself in these large forms, and so it tends to be striplike, and they tend to be over long distances."

Each of the maps represents an editorial decision — what to leave out, as Hessler mentioned. The idea that we, looking at the map, are interested in one specific thing, and not another. "One of the main powers of cartography is that whole point," Hessler says. "What is the information that's relevant to what I want to say? And how we exist in space?"

But as beautiful as these maps are, no one will ever again use them to get from point A to point B. So what's the point of the collection? "Most maps aren't to get from point A to point B," Hessler says. "Most maps are about how we as a civilization, as different cultures, perceive our lives in this box that we live in. All human activity takes place in space, and cartography is the thing that lets us keep track of that space."