Accessibility links
Terrorism | Hidden Brain Why do young people join ISIS? Is it nihilism? Or, as social scientists suggest, a perverse idealism? Hidden Brain explores the psychology of terrorist groups, and why people join them. 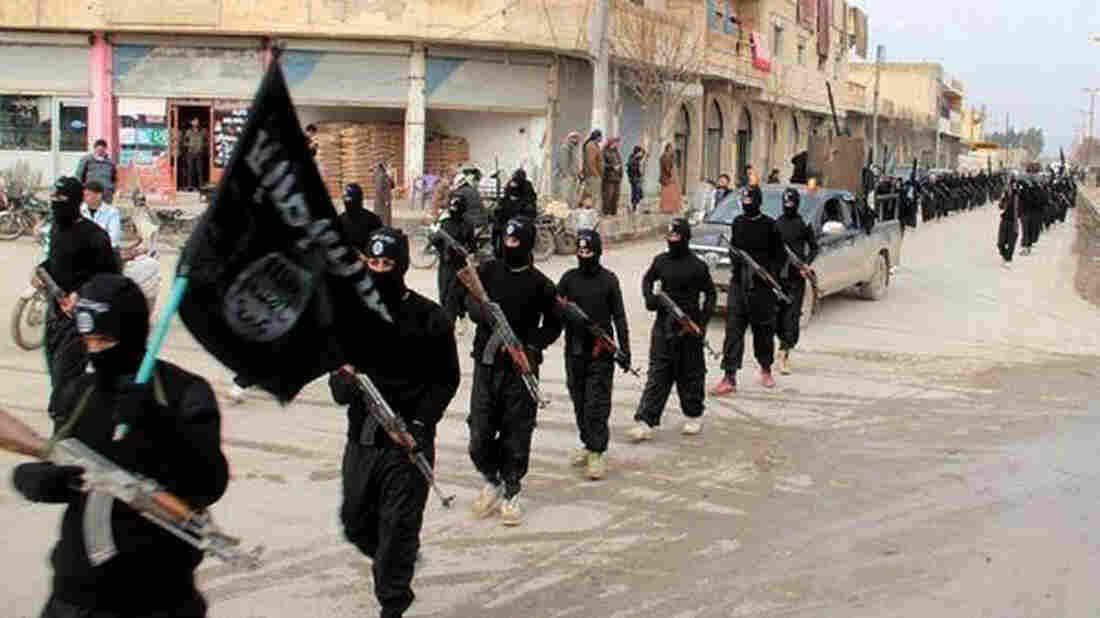 This undated file image posted on a militant website on Jan. 14, 2014, shows fighters from the Islamic State of Iraq and the Levant (ISIL) marching in Raqqa, Syria. Uncredited/AP hide caption 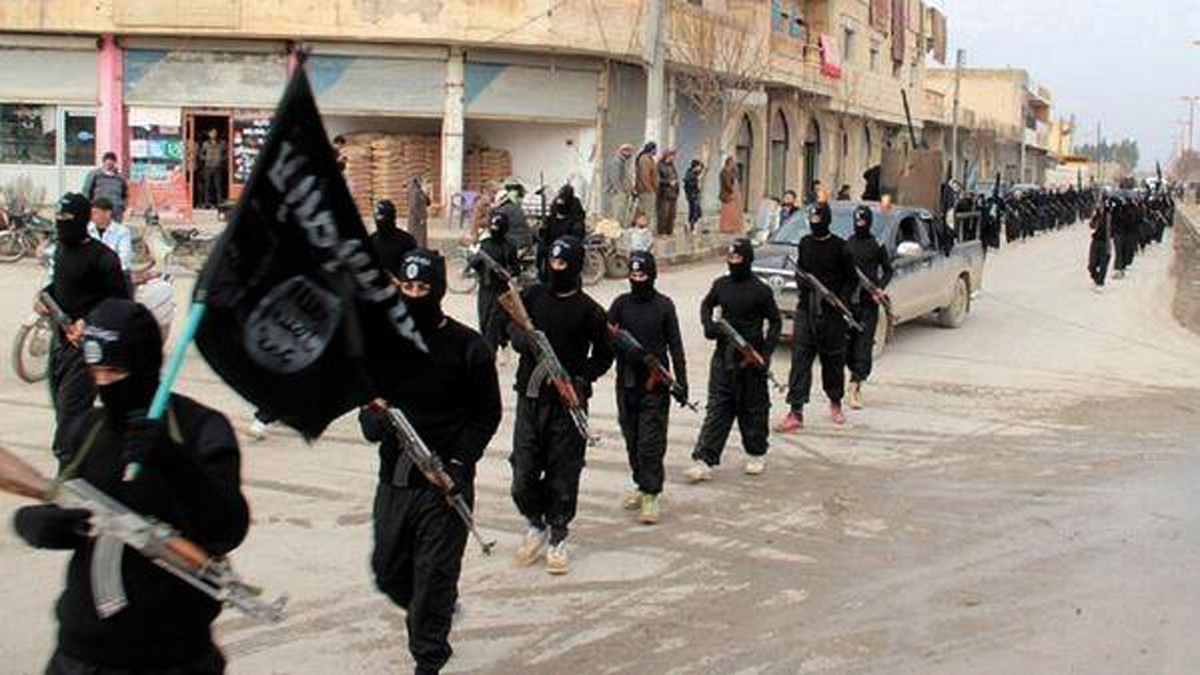 This undated file image posted on a militant website on Jan. 14, 2014, shows fighters from the Islamic State of Iraq and the Levant (ISIL) marching in Raqqa, Syria.

In August 2014, ISIS released a video showing American journalist James Foley kneeling in a barren desert. Foley wears a bright orange jumpsuit. An ISIS fighter stands behind him, a black scarf masking his face. The fighter wields a long dagger. When Foley speaks, his voice is matter of fact, but resigned. He says he knows he will never see his family again.

The ISIS fighter speaks in a British accent. He addresses the American government. He tells them they are no longer fighting an insurgency. They are fighting an army. He then kills Foley.

Following the brutal execution, President Barack Obama condemned what he called ISIS's "nihilistic ideologies." That phrase seems apt: Last year, ISIS fighters lined up and shot some 670 Shia prisoners in Mosul. In February, they beheaded 21 Egyptian Christians. In November, they orchestrated a mass shooting in Paris that left hundreds dead and many more wounded. In areas they have captured, reports suggest they have enslaved entire villages, and carried out a systematic program of rape.

Nihilism seems like a good word to describe such behavior.

But many social scientists say nihilism—characterized by a rejection of morality and an indifference to human life—falls short in explaining what drives terrorists. Mental illness and religious fanaticism, two other explanations often used to explain why terrorists sacrifice their families, their futures, and their own lives, also fall short.

These characterizations do not account for the shared sense of duty, purpose, and even joy that social scientists say binds ISIS fighters together and lures thousands of young people from distant countries to join their cause.

In this week's episode of Hidden Brain, we look at the social and psychological drivers behind international terrorism, and why our best efforts to prevent radicalization so often fail.

We talk to Scott Atran, an anthropologist who has advised the United Nations and the White House on terrorism. He says understanding the motivations of ISIS fighters can help us defeat them. Such understanding begins with acknowledging that ISIS fighters may be more similar to us psychologically than we might like to believe.

"Violent people," Atran says, "members of militant political groups and religious groups, are people, just like everyone else."

It's unsettling to think that terrorists who commit violent acts are not psychologically disturbed or "brainwashed." But that's what a trove of social science research reveals. In fact, as Atran told the UN Security Council earlier this year, "Most foreign volunteers and supporters fall within the mid-ranges of what social scientists call 'the normal distribution' in terms of psychological attributes like empathy, compassion, idealism, and wanting mostly to help rather than hurt other people."

Other psychologists have found that suicide bombers are not usually drawn from the ranks of the mentally ill. Take a study done by Israeli psychologist Ariel Merari and his colleagues. After interviewing 15 Palestinian would-be suicide bombers who were unable to complete their missions—because the bomb failed to detonate or they were captured before they reached their targets—Merari reported none of them turned out to be psychotic. Most surprising, Merari and his colleagues report that fewer than half of the would-be bombers displayed suicidal tendencies.

To be clear, studies of terrorists are hard to do and often include small sample sizes. Militant political and religious groups around the world are different. Palestinian fighters do not necessarily share the beliefs and goals as ISIS fighters. But research over three decades suggests that there are a set of psychological factors that often lead people to pick up arms.

While terrorists often invoke God, many social scientists are skeptical religious extremism can explain why people commit acts of terror. Atran says, for example, that religious belief doesn't explain why a group of young British-Sudanese medical students left promising careers to become medics for ISIS or why a group of friends from the same soccer team signed up to be suicide bombers.

Atran says these young people "self-radicalized." They were searching for meaning in their lives and found it through friends who shared their idealism. ISIS recruiters promised them glory, adventure, and purpose – things that appeal to many young people.

In another study, researchers identified 16 key "mindsets" of members of terrorist groups around the world including the Baader-Meinhof group in Germany, the Lord's Resistance Army in Uganda and the Tamil Tigers in Sri Lanka. Among those mindsets: A belief that the world is a disaster, that peaceful change is not possible, that self-sacrifice is honorable, that noble ends justify immoral means, and that it is possible to create a utopia.

Many people who are not part of terrorist groups have similar views, these researchers found. For example, many people agree to some extent with statements such as, "The best way to die is defending your beliefs" and "Extreme measures are needed now to restore virtue and righteousness in the world."

Atran says ISIS, working through existing social networks, is adept at leveraging idealism: A recent survey of ISIS social media found their foreign followers are often adolescents or young adults. Atran says recruiters often spend hundreds of hours showing young people how the problems they see in the world and in their own lives are connected to larger problems that ISIS is fighting.

Terrorists believe they are making the world a better place: Atran says this is a critical fact in understanding terrorist psychology that gets lost when ISIS is labeled "nihilistic."

The researchers who study terrorist groups suggest that communities can counteract the mindsets that are susceptible to radicalization by teaching students such values as being comfortable with the world's imperfections, tolerating differences, and not idealizing distant utopias. In a word: moderation.

Atran is skeptical that preaching moderation works. He says that strategy doesn't address the longing young people have for greater meaning. He suggests efforts to counter radicalization should draw on the same methods ISIS uses—leveraging peer networks to help people find their place in the world, and giving young people opportunities for a purpose greater than themselves.

Merari says psychological tools are secondary to military tools: "It's very important if you want to fight effectively against militant Islam, you have to first defeat it physically, despite what people say about hearts and minds," Merari says. "If you want to fight ISIS first of all defeat ISIS in the territory it has occupied successfully."