Accessibility links
Tonight's GOP Debate: Cruz On The Rise As Terrorism Becomes Central Focus This is the first Republican debate since the Paris and San Bernardino attacks — and Donald Trump's call for a ban on Muslims entering the U.S. 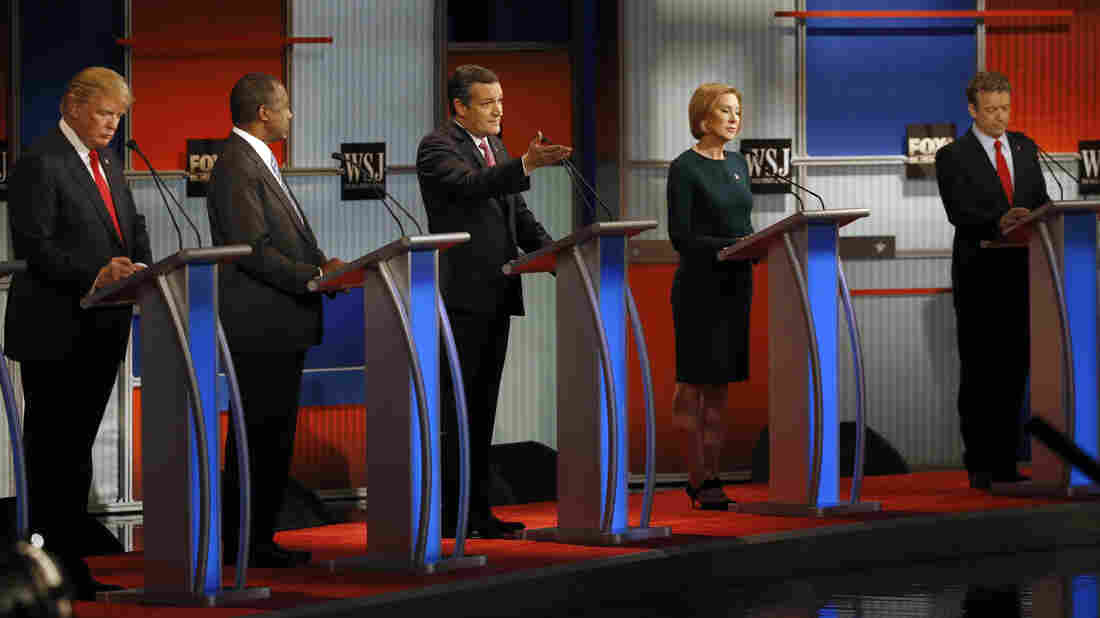 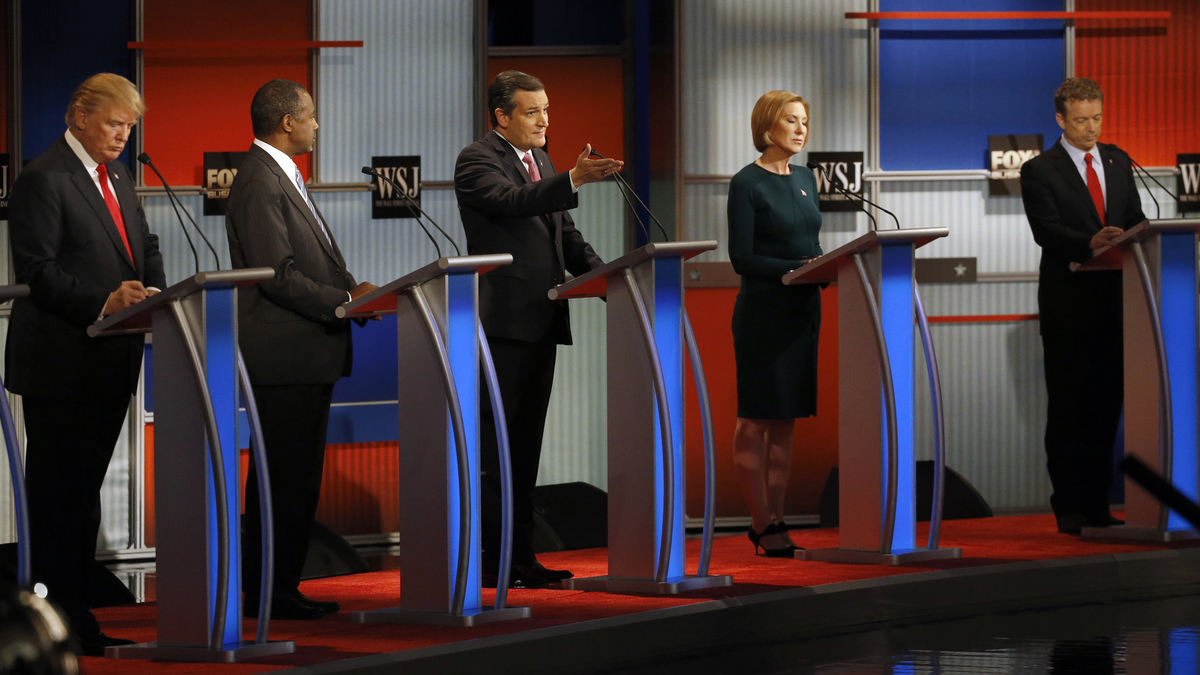 The political atmosphere has shifted considerably since the last Republican presidential debate a month ago, creating a different dynamic ahead of Tuesday evening's GOP face-off in Las Vegas.

Last month's terrorist attacks in Paris have reignited a debate over national security, foreign policy and the appropriate U.S. response. Shootings in San Bernardino, Calif., this month have renewed worries about terrorist sympathizers inside the country. The most controversial reaction to the attacks and the role ISIS may have played has been Donald Trump's proposal to halt all Muslims trying to come into the U.S. for any reason.

Many of his rivals have forcefully condemned such an idea, saying it violated the fabric of religious freedom protected by the Constitution. But Texas Sen. Ted Cruz, who has picked up Ben Carson supporters and hopes to pick off Trump supporters, too, has been careful when it comes to Trump.

While Cruz said he disagreed with the proposal, he did not do so as sharply as others. But their detente may be gone for this debate. Cruz has been rising in polls and even overtook Trump in this weekend's Iowa Poll conducted by respected pollster J. Ann Selzer. And Trump has started to criticize the freshman senator after audio leaked from a Cruz fundraiser where the candidate questioned Trump's judgment.

Nine candidates will be on the main stage of the CNN debate at 8:30 p.m. ET. The undercard debate with four lower-polling hopefuls will start at 6 p.m. ET. Here's what each needs to do and to avoid: 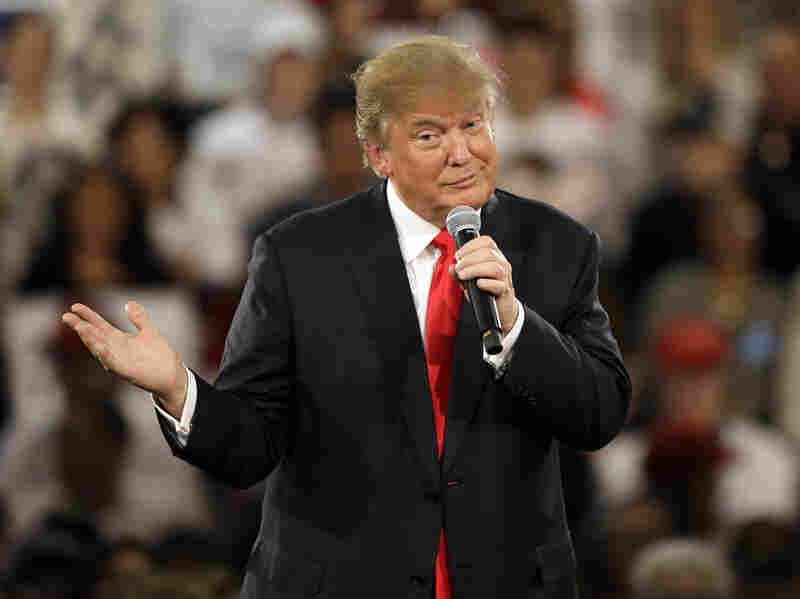 Donald Trump speaks during a campaign rally in Iowa. He will once again be a focus of the GOP debate, especially after his call to ban all Muslims from entering the U.S. Charlie Neibergall/AP hide caption 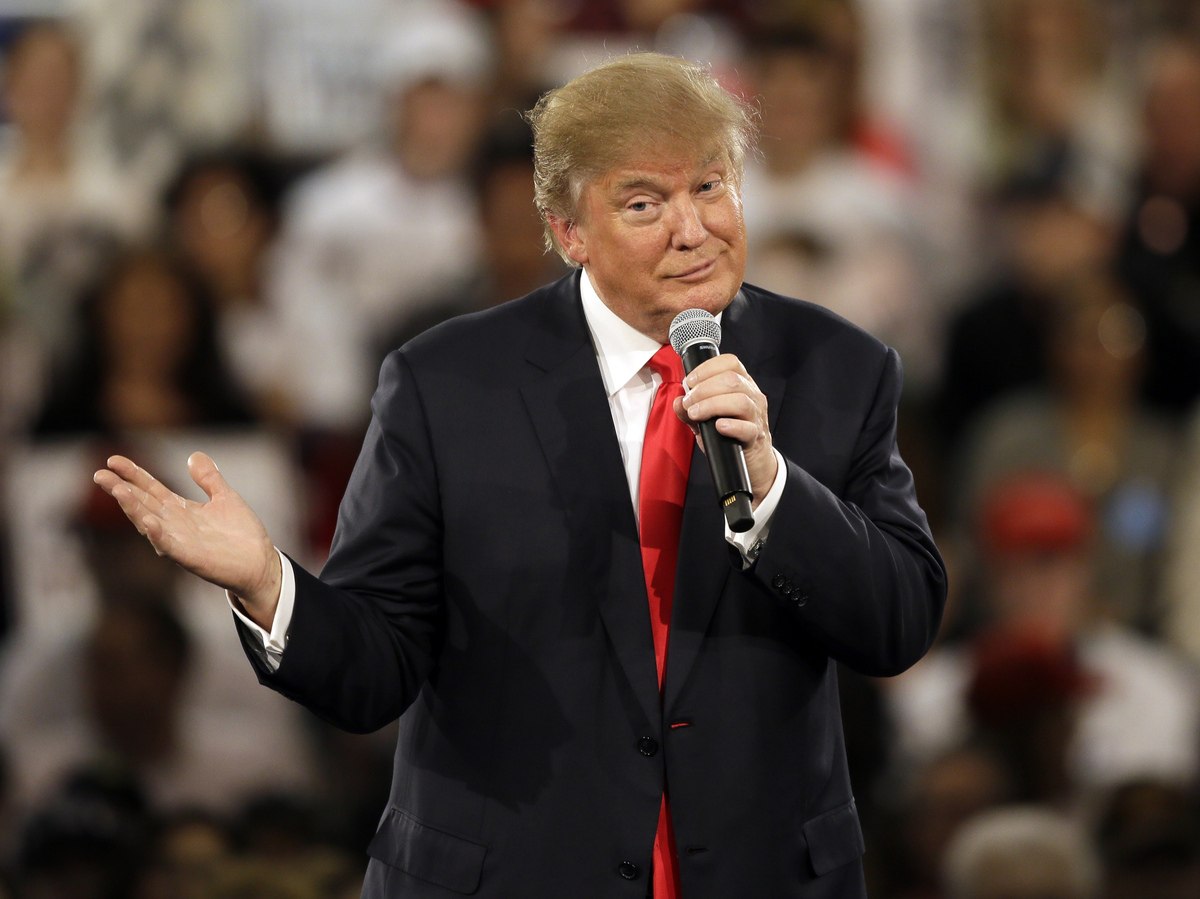 Donald Trump speaks during a campaign rally in Iowa. He will once again be a focus of the GOP debate, especially after his call to ban all Muslims from entering the U.S.

Avoid: Fading from the debate, as he has in a couple of debates; getting upstaged, particularly by Cruz; appearing out of his depth on foreign policy

The helium looked like it might be coming out of the Trump balloon. And then Paris happened. Expect Trump's controversial plan to stop Muslims from entering the U.S. to play a major role in this debate. The proposal drew rebukes from the Republican National Committee, GOP chairmen in New Hampshire and South Carolina and many of his rivals who will be on stage. Each will see an opportunity to, again, try to paint Trump as unserious.

But for Trump, those same tactics are what appeal to his base, and Republicans have yet to find his kryptonite. This is the final debate of the year — and it's now just 47 days until the Iowa caucuses. His GOP rivals won't be pulling any punches at this debate, and Trump has to be ready to take them and respond without getting flustered.

Need: Show he's the choice for conservatives over Trump and hold his own with him 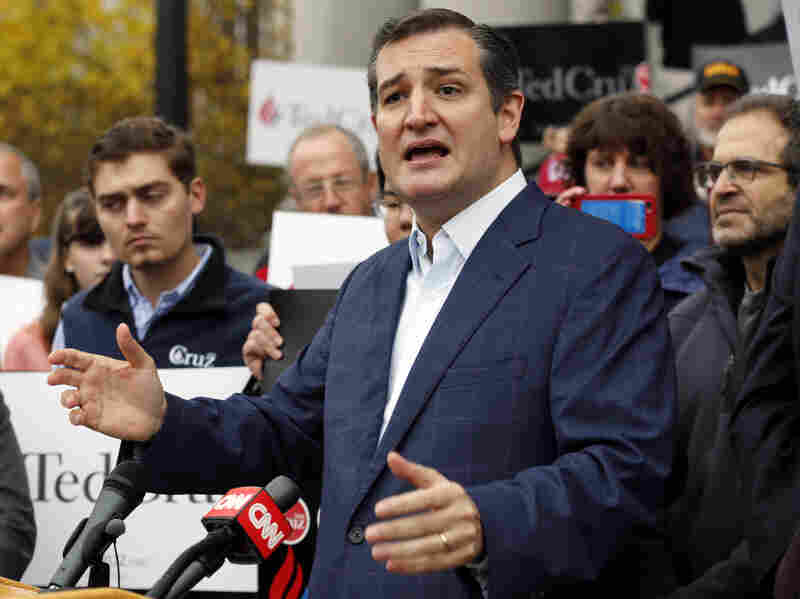 Sen. Ted Cruz, R-Texas, is on the rise. Leading in the gold-standard Iowa Poll, he could be in for a clash with Donald Trump at Tuesday night's debate. Jim Cole/AP hide caption 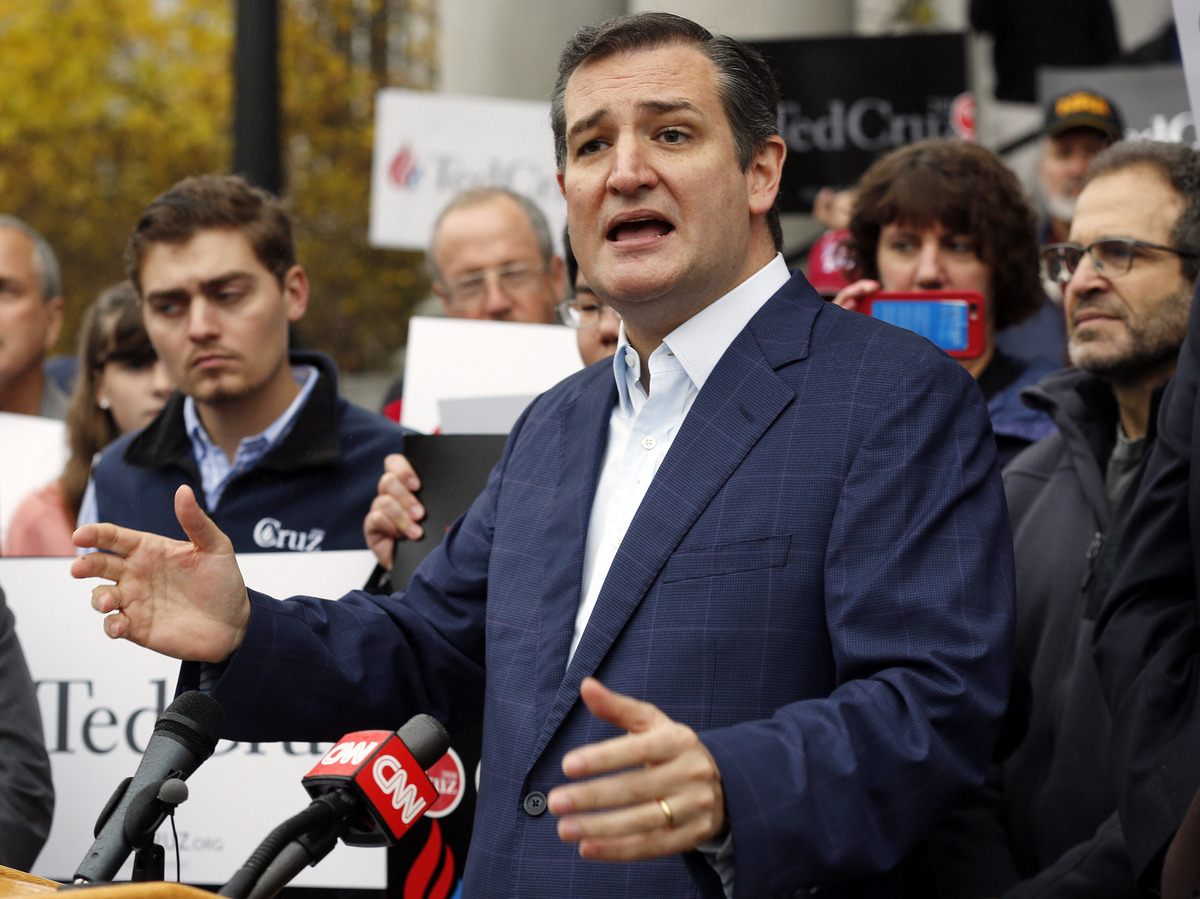 Sen. Ted Cruz, R-Texas, is on the rise. Leading in the gold-standard Iowa Poll, he could be in for a clash with Donald Trump at Tuesday night's debate.

Cruz is the hottest candidate on the debate stage right now, rising in national polls and in crucial Iowa, where he has picked up a string of influential evangelical endorsements. The former champion college debater has consistently delivered in each previous face-off, but the stakes are much higher.

While he has avoided trying to tangle with Trump, a back and forth Tuesday night seems inevitable given the campaign trajectory. Cruz needs to continue finding a way to appeal to evangelical voters — many of whom disagree with Trump's drastic proposal concerning Muslims — while also trying to convince the GOP establishment that he could be an acceptable alternative to Trump.

Among the trio of first-term senators running, Cruz has only been in the Senate three years — the same amount of time Barack Obama had served in the chamber before running for president. With his new surge, Cruz could find himself defending his qualifications to be president, too.

Need: Be relevant on stage and engage his competitors

Avoid: Foreign-policy missteps and fading into the background

It wasn't that long ago when Carson was on the rise in the GOP primary, but the neurosurgeon's support has plummeted over the past month. Just as the focus of the race turned to foreign policy, Carson began stumbling badly on the issue, and one of his advisers even openly questioned whether he was grasping anything he was being briefed on.

Carson has tried to change that narrative with trips overseas to visit Syrian refugees and has more foreign travel planned. But it still may not be enough, given how uncomfortable he's appeared talking foreign policy ("HA-mas," anyone?). Carson hasn't proved an adept or comfortable debater yet; he needs to make a memorable mark and show he can competently discuss pressing matters of national security to stop his slide in the polls.

Need: Be the acceptable alternative to Cruz and Trump

Avoid: Being upstaged in one-on-ones; going on the defensive over immigration

Last debate, it was the Florida senator who was the belle of the ball. Cruz has taken some of the spotlight away in recent days, but look for Rubio to do what he does — be the competent debater he's proven to be. The two freshmen senators are very different, and Rubio has been the one candidate Cruz has been OK with criticizing on immigration, pointing to his past support for comprehensive reform.

Expect Rubio to counter with arguments that Cruz is too soft on national security. His team has readily pointed out he supported limits on government surveillance this year. Rubio has done well when talking about foreign policy, too, and sits on both the Senate Foreign Relations and Intelligence committees. He's the establishment choice who's gotten a lot of traction so far out of past debates, and Tuesday's could help him further solidify that position.

Need: A breakout moment to spur some renewed momentum

Avoid: Being overshadowed again by other top-tier candidates

It's a familiar refrain by this point: Jeb Bush needs a good debate performance. Last month, he didn't do any damage and performed adequately, but it has still made little difference in polling. Bush remains in the game at least through New Hampshire, thanks to his money and superPAC support, but he needs something to put him back in the conversation.

Time's running out for that boost, and he needs a game-changing moment in this debate. He can't risk being eclipsed by New Jersey Gov. Chris Christie either, in trying to appeal to the political center. Expect Bush to again talk up his record as Florida governor and try to emerge as the sensible one on foreign policy — but he hasn't broken through in months.

Need: Stay a part of the conversation; translate her international business experience into foreign-policy experience in a believable way

Avoid: Becoming irrelevant on the crowded stage; appearing too pessimistic

Despite a brief blip after the first debate that helped propel her onto the main stage, Fiorina has stagnated in both early state polls and in national surveys. Even though the former Hewlett-Packard CEO has consistently turned in solid debate performances, including some biting and salient attacks against Trump, she has mostly faded from the conversation as soon as they're over. Once again, her team has to try to find a way to channel a strong national performance into tangible momentum on the ground.

Need: Seize the establishment mantle in the race; build on his strong last debate

Avoid: Being overshadowed by Trump or others competing for New Hampshire

A strong undercard debate last month helped the New Jersey governor get some momentum. He's back on the main stage, has been picking up endorsements in New Hampshire — including the Union Leader's backing — and could be rising at just the right time. The top Granite State paper cited Christie's experience as a U.S. attorney prosecuting terrorists as experience that's needed in the current climate, and expect Christie to convey that to a larger audience.

Also, if voters like Trump's bombast, Christie may try to show some of his own on stage Tuesday night — and he's someone party leaders would be a lot more comfortable with as their standard-bearer.

Need: Be more than a Trump attack dog; show he can be serious and statesmanlike

Avoid: Becoming too defensive and asking for more speaking time from debate moderators

The Ohio governor and his affiliated superPAC have been relentless in attacking Trump over his controversial comments and ideas in media and ads over the past month. The results? Trump has withstood the assault while Kasich has remained toward the back of the pack. Kasich showed some early momentum in New Hampshire, but has been overtaken by Christie and others. He needs to find some way to articulate why he is different and expand beyond simply attacking the front-runners.

Need: Prove he belongs on the main stage; show that his message still matters in the GOP

Avoid: Being swept into a debate on surveillance amid concerns over national security

The Kentucky senator barely made it onto the prime-time debate stage. Now, he has to prove he belongs there. He's not been afraid to punch up, but his fledgling campaign has little to show for it. And, as national security concerns have come front and center in the GOP race, his push to curb surveillance and fight for other restrictions has seemed out of place at past debates — and that was even before last month's terrorist attacks elevated the issue even more with Republican voters.

Need: A breakout moment that catapults them onto the next main-stage debate

The lower-tier debate is becoming far too familiar for some of these hopefuls — almost all mired in the low single digits. And with Iowa inching closer, it's harder to find a rationale for some of their candidacies.

Louisiana Gov. Bobby Jindal exited after last month's debate, and some of these contenders could be next. Both Huckabee, the former Arkansas governor, and Santorum, the former Pennsylvania senator, got blows last week when top Iowa evangelical leader Bob Vander Plaats — who backed them in 2008 and 2012, respectively — threw his support behind Cruz instead. The two past Iowa caucus winners are flat-lining in the state, and they each need to do something to turn around their campaigns. Huckabee lost his top spokeswoman and longtime aide Alice Stewart on Monday, too — never a good omen for a struggling campaign.

The same can be said for Pataki and Graham, too, who have never been able to find success nationally or in an early state. Polls last week even showed the South Carolina senator getting just 2 percent in his home state primary. He's back on the stage after missing the cut last debate. In a cycle in which being an outsider is an asset and an insider is a liability, it's been tough for Graham to break through. But the issue of terrorism certainly is in his wheelhouse.