Accessibility links
Ahead Of GOP Debate, Clinton Rips Republicans On National Security Outlining her plan to combat ISIS and radicalization in the U.S., the Democratic presidential candidate said "shallow slogans don't add up to a strategy."

Ahead Of GOP Debate, Clinton Rips Republicans On National Security

Ahead Of GOP Debate, Clinton Rips Republicans On National Security 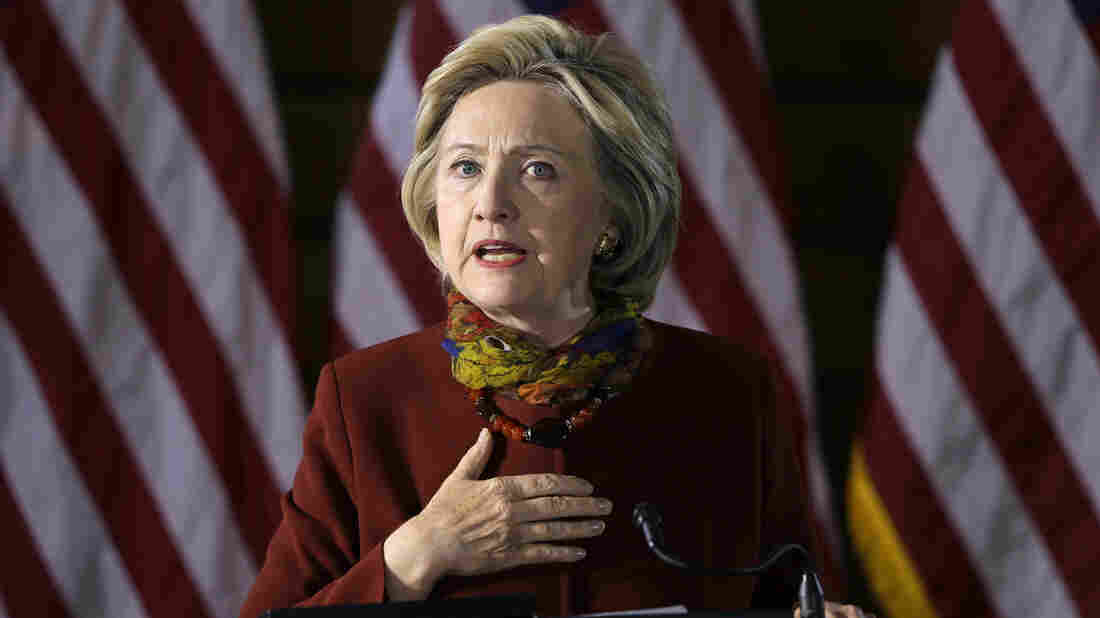 Democratic presidential candidate Hillary Clinton speaks about her counterterrorism strategy during a speech at the University of Minnesota in Minneapolis on Tuesday. Charlie Neibergall/AP hide caption 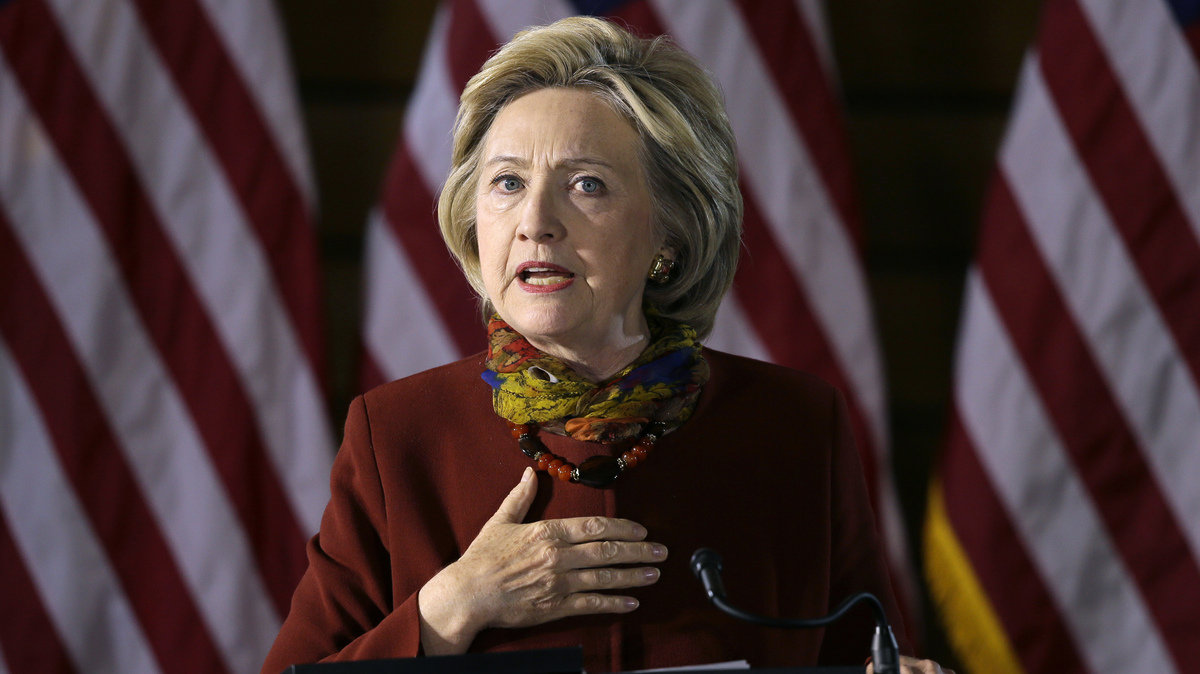 Democratic presidential candidate Hillary Clinton speaks about her counterterrorism strategy during a speech at the University of Minnesota in Minneapolis on Tuesday.

Hillary Clinton outlined her plan to combat ISIS and radicalization in the U.S. on Tuesday, swiping at GOP candidates just hours before their debate that "shallow slogans don't add up to a strategy."

After an address last month where she pivoted from the White House in how she'd take on the terrorist group overseas, Clinton on Tuesday addressed how she'd stop homegrown terrorism — just weeks after two shooters inspired by ISIS killed 14 people in San Bernardino, Calif.

But even as she explained ways she would halt would-be jihadists, she was careful not to draw a link between terrorists and all Muslims — even meeting with a group of local Muslim community leaders before her speech at the University of Minnesota.

"We cannot give in to fear," Clinton said. "We can't let it stop us from doing what is right and necessary to make us safe, and doing it in way that is consistent with our values. We cannot let fear push us into reckless actions that end up making us less safe. Americans are going to have to act with both courage and clarity."

The Democratic presidential frontrunner blasted Donald Trump specifically, saying his proposal to block all Muslims from entering the country was dangerous.

"Demonizing Muslims also feeds a narrative that jihadists use to recruit new followers around the world, that the United States is at war with Islam," Clinton said. "As both the Pentagon and the FBI have said in the past week, we cannot in any way lend credence to that twisted idea. This is not a clash of civilizations. It's a clash between civilization and barbarism and that's how it must be seen and fought."

Clinton also took a shot across the bow at rising Texas Sen. Ted Cruz (though didn't mention him by name) for an earlier comment that he would "carpetbomb" ISIS until the sand glowed, and also slammed him for holding up Senate nominations.

"Bluster and bigotry are not credentials for becoming commander-in-chief," Clinton said.

Outlining what her campaign called a "360-degree strategy to keep America safe," Clinton's first step would be to shut down ISIS recruitment in the U.S., focusing especially on curbing its influence and reach online. To do so, she said Washington and Silicon Valley need to work together.

"Our security professionals need to more effectively track and analyze ISIS's social media posts and map jihadist networks, and they need help from the tech community," she said. "Companies should redouble their efforts to maintain and enforce their own service agreements and other necessary policies to police their networks, identifying extremist content and removing it."

Clinton also called for stopping "ISIS recruits from training abroad, and prevent foreign jihadists from coming here," pointing specifically at greater collaboration between and with European countries to track whether people have spent time in Iraq and Syria.

"The United States and our allies need to know the identities of every fighter who makes that trip, and then share information with each other in real time," Clinton said.

She also underscored that Muslim Americans should be key partners in identifying and stopping radicalization at home.

"There are millions of peace-loving Muslims living, working, raising families, and paying taxes in our country," she said. "These Americans may be our first, last, and best defense against home grown radicalization and terrorism. They are the most likely to recognize the insidious effects of radicalization before it's too late, intervene to help set a young person straight."

Clinton's specific steps outlined Tuesday follow her break with the White House last month, where she called for more airstrikes and special operations forces and better intelligence in the fight against ISIS.

While it won't be easy for President Obama's former secretary of State to try and distance herself from his foreign policy, it's one she needs to do as much as she can — this week's NBC/Wall Street Journal poll found that 73 percent of all voters want a different approach than Obama.

That liability is something the Republican National Committee pointed out in a memo ahead of Clinton's speech Tuesday. "As the chief architect of President Obama's foreign policy, Hillary Clinton has seen her tenure as Secretary of State go from being a chief qualification for the presidency to a huge political liability, particularly when it comes to the issue of counterterrorism," RNC press secretary Allison Moore wrote.

And after her address, the RNC slammed her proposals as nothing new, arguing a State Department program she touted as helping to curb online threats was unsuccessful.

"That the former Secretary of State's most successful encounter with initiatives to combat online radicalization was a completely ineffective program that's moved to the chopping block tells you all you need to know about her record and experience confronting this threat," RNC research director and deputy communications director Raj Shah wrote to reporters.