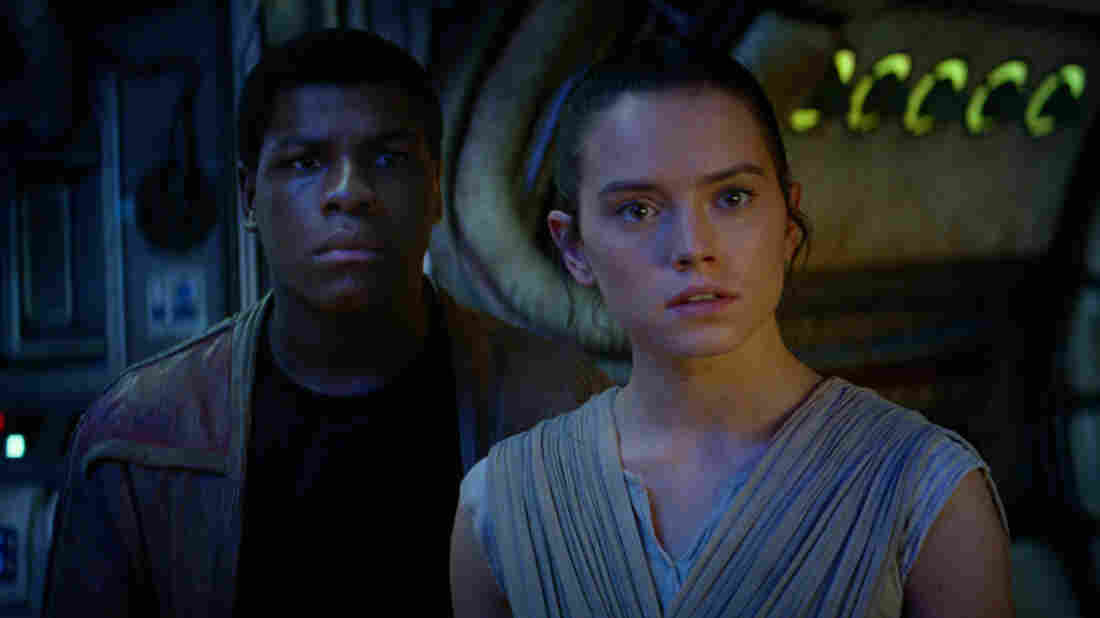 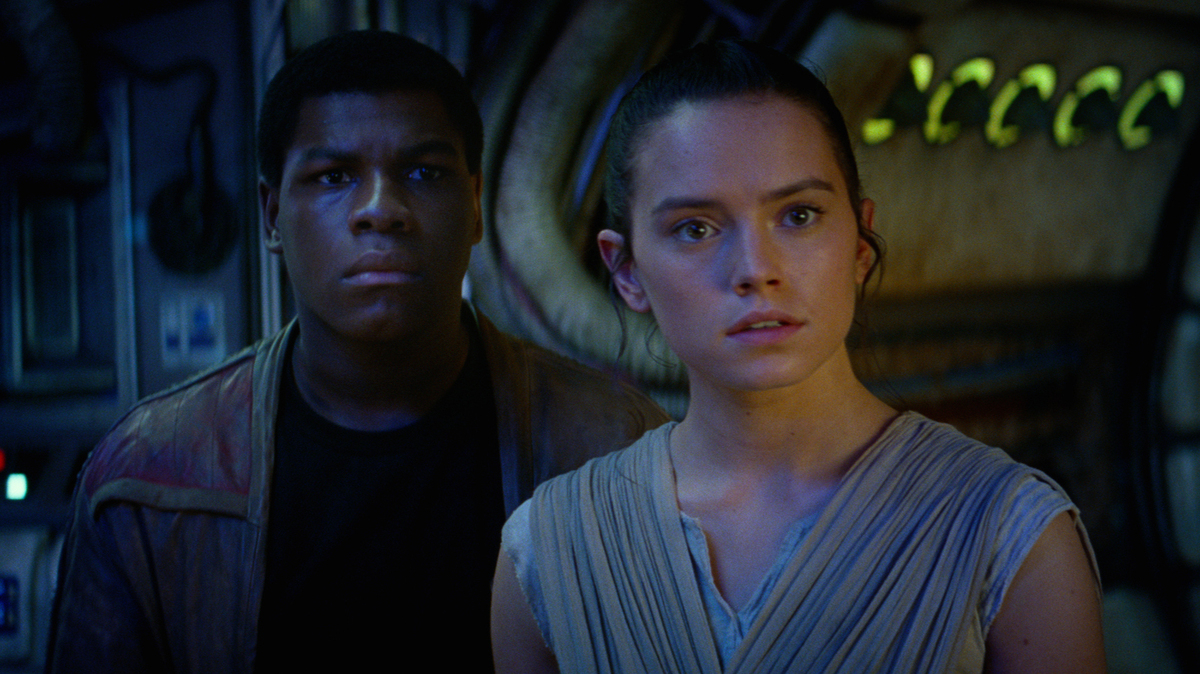 There was something about finally sitting in front of the new Star Wars movie that felt like enthusiasm, but there was also something that felt like dread. I'm not a Star Wars-head, particularly, but I have enormous fondness for the original three movies, which I've seen a decent number of times and own on DVD (Regular DVD! Not even Blu-ray! Like I'm a pioneer seeing movies in a covered wagon!). The prequels I don't care about: I saw the first one and skipped the other two on the theory that one bite of a bad peach is enough to know the rest of it isn't for you, particularly if many people you know and trust discuss the entire episode as the Bad Peach Incident.

But Star Wars: The Force Awakens is, as it turns out, both a worthy companion to that original trilogy and a very good movie on its own. Director J.J. Abrams, who's also been making the current batch of Star Trek movies and earlier co-wrote Armageddon and co-created Felicity, has, against rather overwhelming odds, successfully taken the handoff of one of the hottest batons in film history.

The good news, spoiler-wise, is that I couldn't give away the details of where we stand with regard to the precise alignment of good guys and bad guys as of the opening of this movie even if I wanted to, because having seen it, eh, I don't really know. The film begins with the declaration of teams and the goal to be attained, but — perhaps ironically, given the intense focus on canon among a certain element of the fandom and you know who you are — not much in the way of back story. See, you got these guys, and you got those guys. They're fighting. The bad ones wear the black helmets and the swooshing capes. This whole thing has been going on for a while, so there are some hard feelings.

Chief among the bad guys is Kylo Ren (Adam Driver), who looks a little bit like a streamlined Darth Vader with a lankier, slightly more sardonic approach to evil. At the outset, the lead good guy is pilot Poe Dameron (Oscar Isaac) — he's the one carrying the adorable BB-8 droid on which your youngest niece's Christmas list is perhaps founded. Also on hand is a Stormtrooper played by John Boyega who's marked early on so that you can follow him, because you're going to want to follow him. And finally among the early principals, there's Rey (Daisy Ridley), a scavenger who scrapes by on trades of found junk for the barest allotments of food and can hold her own very nicely in a fight where everybody hits each other with sticks, should that ... you know, come up.

And yes, as highly publicized, you will eventually see evidence of Han Solo and Princess Leia (though you shouldn't address her that way) and Luke Skywalker, although in very different quantities.

It would be unfair to explain how all these people's stories intersect, except to say that particularly between various combinations of Boyega, Ridley and Isaac, the film surfaces some dynamite chemistry that elevates a series of chases through space, through forests, through busted-up tunnels and over deserts. On foot, in little ships, in big ships, they scoot and hustle and crack satisfyingly wise while something blows up right over there and juuuuust misses them. It feels good and taut for a movie that's two hours and 15 minutes long, and it does — but does not overdo — good creature work, particularly with the curious and wise character of Maz Kanata, voiced by Lupita Nyong'o. Maz might be the only digitally created character of her kind where I've ever been convinced the CG work added something intriguing and emotionally interesting that might not have been present in even the best human face.

The Force Awakens is lovingly shot against gorgeous backdrops, from spare, arid expanses of sand to thick stands of trees broken up by lakes just right for leaving a wake as you skim your ship above the surface. It brings back lots of old iconography, but mostly pushes it to the side to leave room for the new story. There are well-chosen images that will play effectively as homage to those who know the old movies but won't have the hollow thud of a missed joke to those who haven't.

But perhaps the nicest surprise is that the script — written by Abrams and Michael Arndt along with Lawrence Kasdan, who worked on both The Empire Strikes Back and Return of the Jedi — has a better and sharper sense of humor than the original trilogy had. Star Wars in its original incarnation, much as I loved it, was not necessarily stacked with great deliverers of wry jokes, and this one is. You know the part in the first Star Wars when Han doesn't know what to say to the guys on the intercom about why they definitely should not come running, so he shoots the controls and says, "Boring conversation anyway"? The Force Awakens is rich with exactly that kind of tossed-off, surprising, sort of humbly great joke.

It's still a resonant and emotional story as well; it's still about important things and about duty and family and (critically) friendship, and it's still a story that must sometimes reckon with sad things. But this is probably the best-case scenario for this film: exciting and fun, stirring and respectful, not too goofy and not too serious and not too devoted to reinventing the wheel. They made a good Star Wars movie here. Pretty cool, all in all.