Accessibility links
There Are Way More Campaign Ads This Year (But They're Not Doing Much) Compared to this time four years ago, nearly 50 percent more ads have run in the presidential campaign. The candidate spending the most on ads is Jeb Bush, now mired at the bottom of the polls.

If it seems like there are a lot more presidential ads on TV than in past campaign cycles, it's because there are. 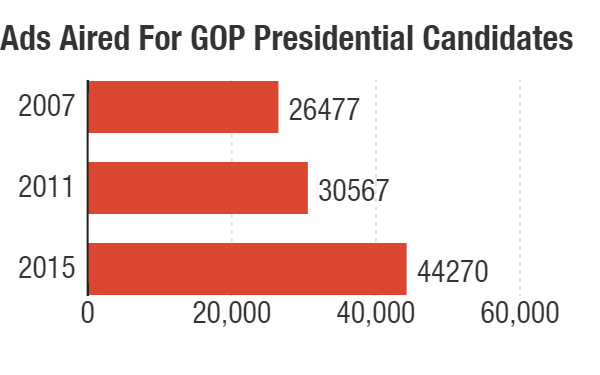 The number of individual ads aired by campaigns and outside groups on broadcast television, national network and national cable television. Kantar Media/CMAG with analysis by the Wesleyan Media Project hide caption

Without a Democratic president running for re-election, Republicans have upped their ad volume nearly 45 percent from the 2011-12 cycle, according to a new report by the Wesleyan Media Project, which tracks TV advertising every election cycle.

Even more dramatic is the shift in the balance of who's buying the ads between traditional campaigns and outside groups like superPACs. Outside groups sponsored just 1 percent of presidential primary ads at this point in 2007, 69 percent in 2011, and this year — 81 percent.

But the report confirms something we've reported throughout this campaign: Increased spending isn't doing much for candidates, at least on the Republican side, the Wesleyan report says. 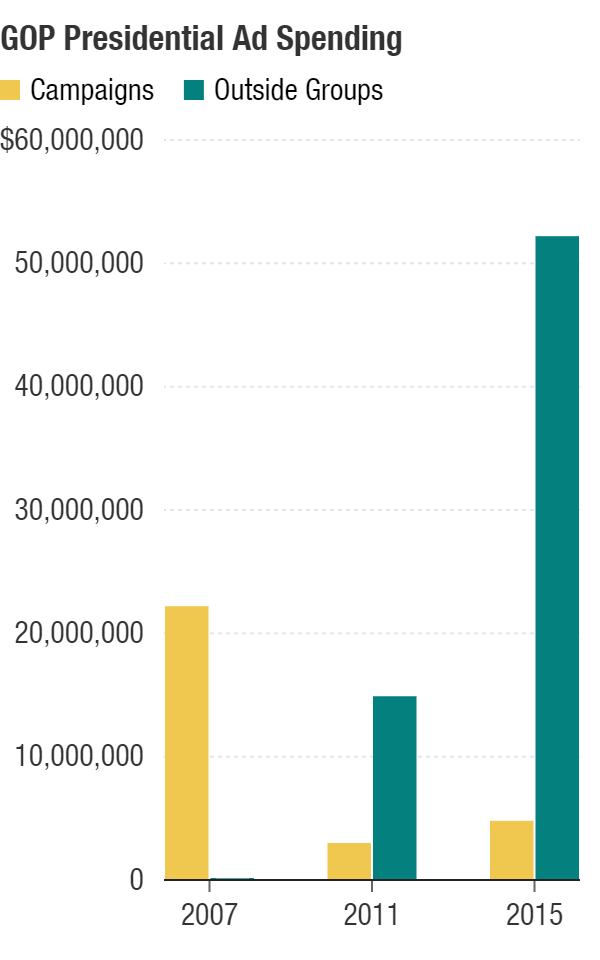 Exhibit A is former Florida Gov. Jeb Bush, of the spectacular fundraising and low poll numbers. His campaign and an allied superPAC called Right To Rise USA have spent $25.7 million so far on broadcast, national network and national cable TV. It bought them 15,750 ads between Jan. 1 and Dec. 9. But in the latest poll averages from Real Clear Politics, Bush stands at 4 percent.

(The GOP front-runner, at 33 percent in polling averages, is Donald Trump. His TV ad budget: zero. He gets all the exposure he needs from media coverage.)

"Some ads score well" on effectiveness, said Erika Franklin Fowler, a political scientist at Wesleyan University who co-directs the project. "But volume and quality don't go hand in hand."

She cited "Desk," a 30-second spot the Bush superPAC released last week. As the camera moves in toward the desk in the Oval Office, images of Trump, then Ted Cruz, and then Marco Rubio appear as if sitting behind it. An announcer suggests each is unqualified for the job — and then the ad shifts to talk about Bush.

Fowler said three attacks are too many. "It ends up coming off as a laundry list," she said. And right now that's the problem with the whole campaign: "There are too many other candidates to attack." She predicted the ads will get more focused and effective as the candidate field shrinks.

Following Trump, Ted Cruz has second place in the RCR poll averages. The Wesleyan report, using tracking data from Kantar Media/CMAG, says Cruz and two of his superPACs have done barely more TV than Trump: 457 ads, at a cost of about $300,000.

Third-place candidate Marco Rubio and his allies aired nearly 6,600 ads, at a cost of almost $10 million — of which 82 percent came from a 501(c)(4) "social welfare" group called the Conservative Solutions Project. Unlike the superPACs backing other candidates, the group is exempt from campaign finance disclosure laws, so its donors are never publicly identified.

The catch is in its tax-exempt status: Politics cannot be its major purpose. Its TV spending seems to reflect that. The nonpartisan Center for Responsive Politics, which is working with the Wesleyan project, found the Conservative Solutions Project disclosed $4.88 million in political spending to the Federal Election Commission. But Kantar Media/CMAG, which tracks the ads themselves, counts an additional $3.2 million or so in ad buys.

Fowler gave a broader breakdown of the secret money: 18 percent of Republican primary ad spending came from undisclosed donors. And 70 percent of that undisclosed money was spent by Conservative Solutions Project, whose website opens onto a 30-second ad promoting Rubio.

The report has a couple of other surprises. Democratic candidate Bernie Sanders edged ahead of front-runner Hillary Clinton in the two weeks from Nov. 27 to Dec. 9, 2,508 ads to 2,041. And in a race notable for its negativity, everyone's ads have been mostly positive. The exception is Democratic outside groups; 95 percent were negative or contrast spots, but the total was just 448 ads.

The project is a collaboration of political scientists at Wesleyan University, Bowdoin College and Washington State University. It began tracking political ads in the 2010 elections.