Accessibility links
All Eyes On Trump Once Again, But His Rivals Feel The Pressure Donald Trump appeared serene and imperturbable, while most all the others on stage directed their fire primarily at each other. Jeb Bush was the exception, saying Trump would be "a chaos president."

All Eyes On Trump Once Again, But His Rivals Feel The Pressure

All Eyes On Trump Once Again, But His Rivals Feel The Pressure 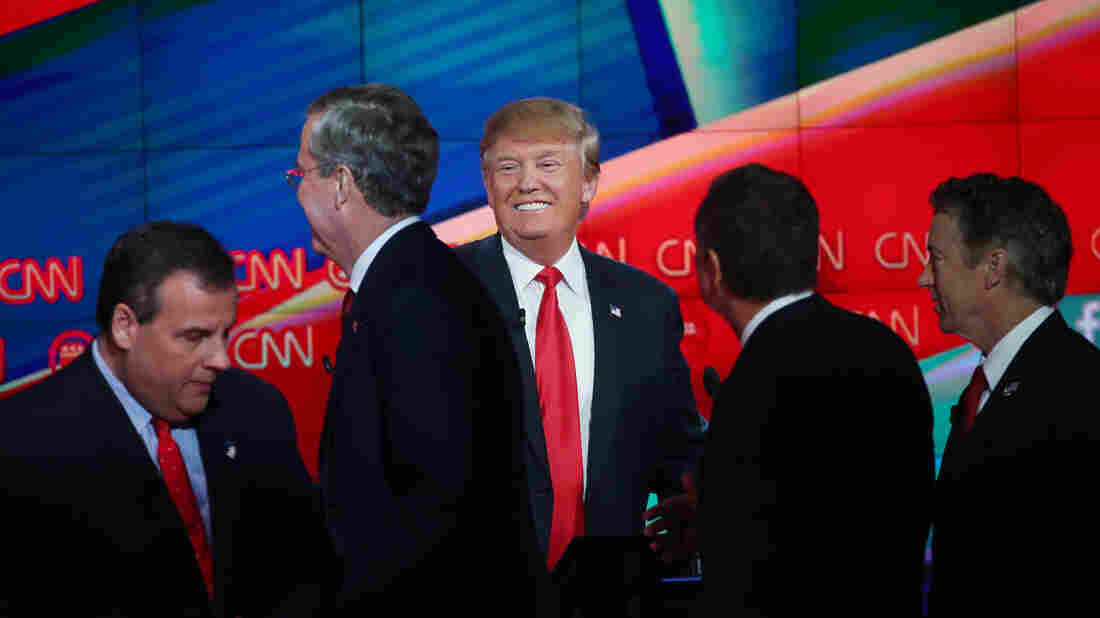 In the end, Tuesday's debate seemed to do little to scramble the standings ahead of the holidays — eyes were mostly, once again, on Donald Trump (center). Justin Sullivan/Getty Images hide caption 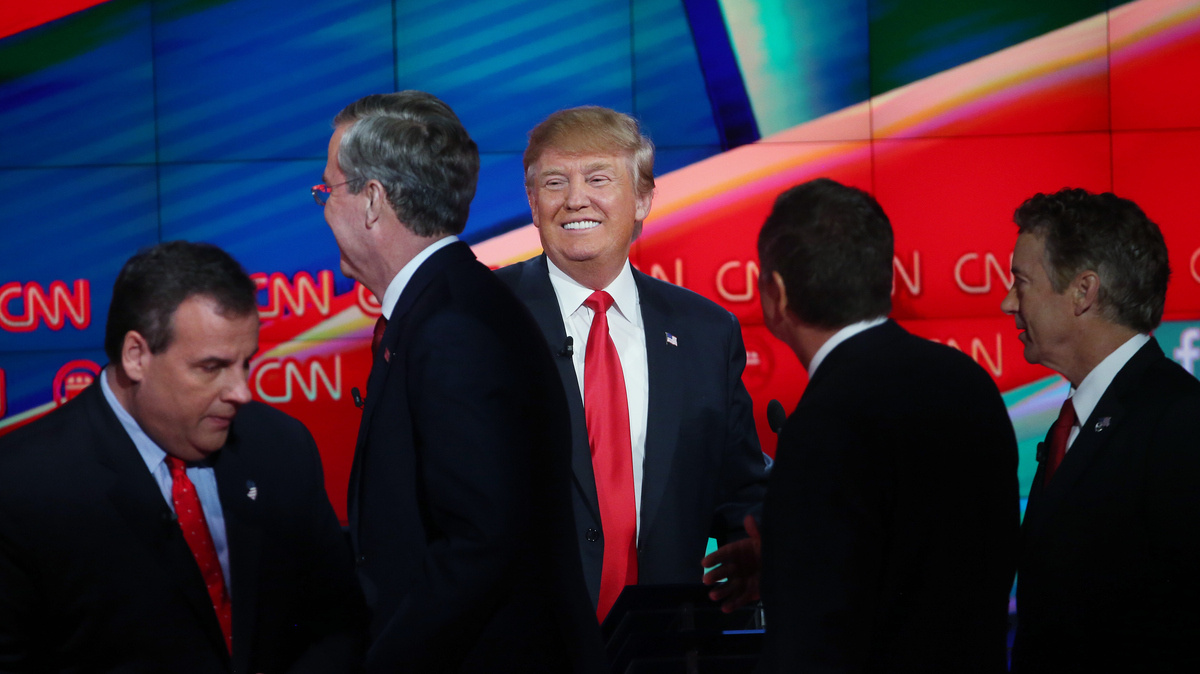 In the end, Tuesday's debate seemed to do little to scramble the standings ahead of the holidays — eyes were mostly, once again, on Donald Trump (center).

Donald Trump entered the fifth Republican debate of this presidential contest on Tuesday night as the national front-runner by leaps and bounds. Other candidates have risen and fallen, but the legion of Trump's support has not wavered.

If anything, the billionaire's backing has swollen to even greater proportions since his call for a temporary ban on Muslims entering the U.S. That idea has taken a beating in the media and has been endorsed by exactly none of the other presidential hopefuls. Yet Trump's message continues to resonate with his legions of followers.

His phenomenal showing has forced the rest of the wide field to devote their energies to countering the mercurial businessman and his unconventional bid for the nation's highest office. Three well-known governors have already quit the race, and the field gathered this week in windy Las Vegas may soon be winnowed further.

That forces each candidate to decide whether he or she stands to gain more by confronting Trump or by appeasing him. Most chose the latter.

Trump had some rough moments over the course of the two hours. He seemed at a loss when asked about the nuclear triad, the three kinds of delivery systems for U.S. nuclear weapons.

"I think," Trump said, frowning, "I think, for me, nuclear is just the power, the devastation is very important to me."

But apart from such aberrations, the ultra-confident Trump touted his poll numbers as virtues and his past business exploits as qualifications for high office.

Most of the time he appeared serene and imperturbable, while most all the others on stage directed their fire primarily at each other.

Trump did not dominate the debate in terms of speaking time. He was on for about 13 1/2 minutes, roughly as long as Sen. Marco Rubio of Florida. Sen. Ted Cruz of Texas was on for 16 minutes, and the other candidates had about nine or 10 minutes each.

Yet even when Trump was not speaking, the CNN camera often returned to capture Trump's reactions — which were often expressive.

Even when the CNN moderators threw some of his own harsh words back at him, Trump refused the bait. Was Ted Cruz really "a bit of a maniac"? Trump just shrugged and reached over to give Cruz a pat on the shoulder. "He has a wonderful temperament," Trump said. "He's just fine. Don't worry about it."

One who did seem worried about Trump's past statements was Jeb Bush, the former Florida governor whose once high-flying campaign has been in steady descent since the summer. Bush said Trump's Muslim ban was "not a serious proposal."

It would, in fact, "push the Muslim world, the Arab world away from us at a time when we need to re-engage with them to be able to create a strategy to destroy ISIS."

Bush also said Trump was "great at the one-liners" but amounted to a "chaos candidate" who would be "a chaos president." Responding to Trump's plan last week, Bush had called him "unhinged."

Trump just smiled. "Jeb doesn't really believe I'm unhinged. He said that very simply because he has failed in this campaign. It's been a total disaster."

Later Bush told Trump, "You're not going to be able to insult your way to the presidency." Trump said Bush had seen his lectern moved from center stage to the brink of falling offstage. He got a good laugh from the crowd for that one.

Social media showed millions of viewers were closely following the jibes between Bush and Trump, but the disparity of their respective polling numbers suggests these were not the most meaningful clashes of the night.

And not the only ones, surely. Cruz and Rubio crossed swords throughout the evening, on the collection of data on domestic phone calls in the U.S., on defense spending and on the future of immigrants in the U.S. illegally.

It was clear the two first-term, Tea Party champions from the Senate see themselves running in the same lane as the field approaches the first actual voting activity in lowa in less than seven weeks.

As those two squared off, two other candidates at the far end of the lectern row clashed repeatedly on the evening's designated topic — national security — and the prioritizing of the nation's hazards. Sen. Rand Paul of Kentucky, who barely made the cut for this debate based on his standing in polls, said the greatest threat to American security was not ISIS but the accumulated debt of the federal government.

New Jersey Gov. Chris Christie spoke early and often about the terrorist threats the U.S. has faced since Sept. 11, 2001, and the status of those threats today. He also talked about getting tougher with the Russians and shooting down their planes if they violated a no-fly zone in Syria.

"Well," responded Paul, "I think if you're in favor of World War III, you have your candidate."

Paul argued that regime change in the Middle East may have removed undesirable dictators in several countries, but it had not led to peace or to governments that could control the rise of radical jihadism.

Both Cruz and Carly Fiorina found moments to complain about the behavior of the CNN moderators. Cruz said they tried to sow seeds of dissension among the Republican candidates, exploring fissures where perhaps none existed. At another point, Cruz tussled with moderator Wolf Blitzer, who would not let him talk out of turn and kept up his resistance as Cruz persisted in talking.

Fiorina later objected to not being allowed to interject an answer, adding, "This is why the people are fed up with the political class."

Dr. Ben Carson, the pediatric neurosurgeon, has been considered another product of public dissatisfaction with the political class throughout the fall campaign. For a time, he had a lead in Iowa, the site of the first voting test in February. But Carson has faltered as the campaign issue focus has shifted from personal and social issues to a strong emphasis on national security and foreign policy.

On Tuesday night, Carson once again appeared slightly disengaged from the conflict all around him. Speaking in his customary, calm manner, he often used daily life and medical analogies for issues of global power and military confrontation.

Also showing signs of the strain of the campaign Tuesday night was Ohio Gov. John Kasich, who returned to reciting his familiar home-state formula for success: "It's reform, it's hope, it's growth, it's opportunity, and it's security."

But Kasich, a budget and administration expert both in Congress and in the administration of President George W. Bush, has had more difficulty selling the experience he earned on foreign policy while serving on Capitol Hill.

In the end, the evening seemed to do little to scramble the standings ahead of the holidays, a traditional time of hiatus for voters if not for the campaigns.

But late in the proceedings, Trump managed one more time to reinsert himself and provide a news nugget for yet another night and day of coverage. He told moderator Hugh Hewitt he was ready to forswear a third-party bid for the White House if he does not win the Republican nomination.

That prompted Carson to say something similar. Both men were atoning for remarks they made last week in response to stories of a "brokered convention" next summer that might rescue the GOP establishment from its own outsider candidates at the last moment.

Judging by the debates so far, only the Republican primary voters will be able to do that.