Accessibility links
Fact Check: Cruz's Misleading Charge About Rubio And Refugees Did Marco Rubio design a law that would let the president invite refugees into the U.S. without background checks? No. 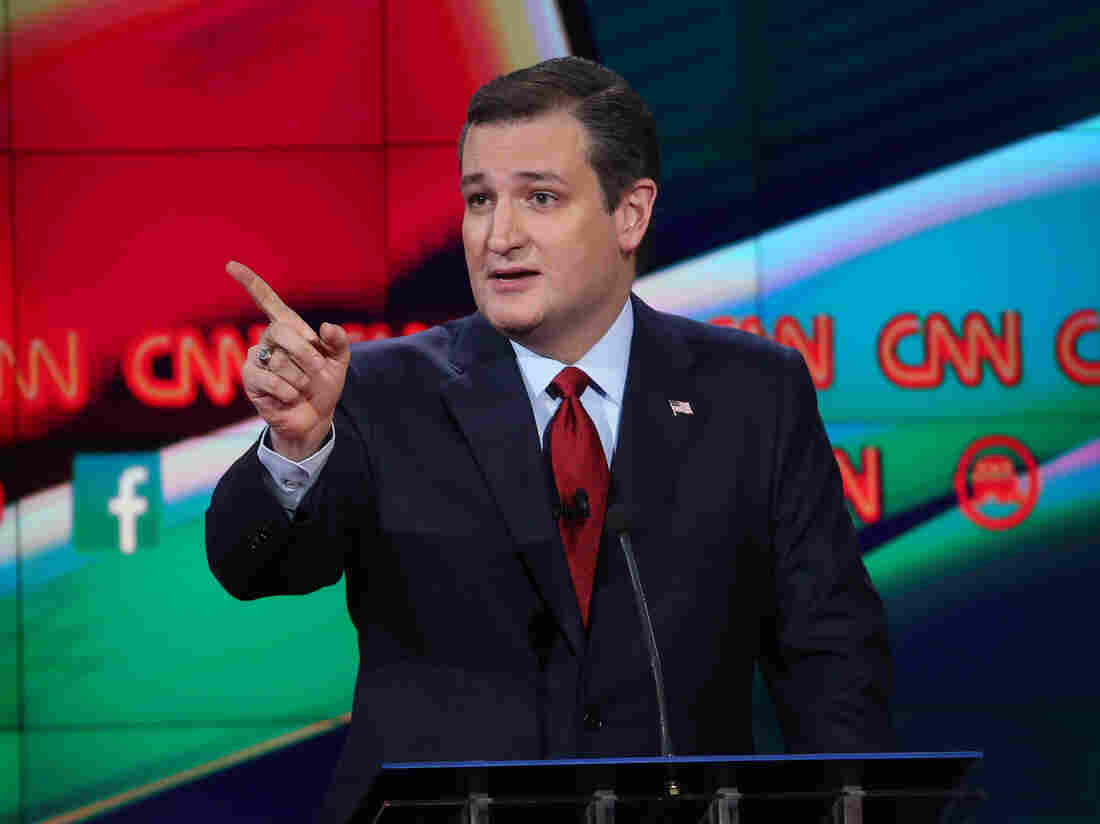 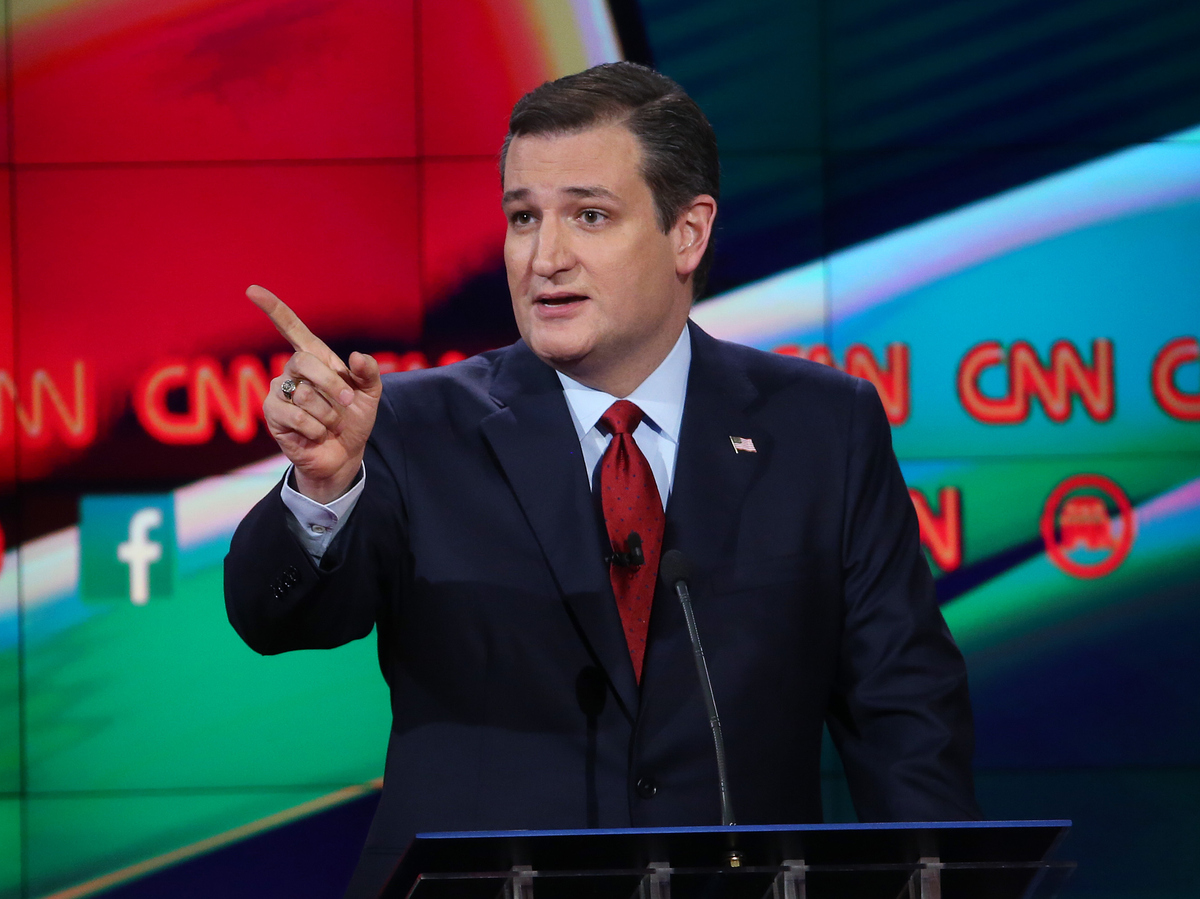 Earlier this year, Donald Trump turned up the heat on immigration rhetoric in the GOP primary race. But thanks to attacks in Paris and then San Bernardino, the U.S. immigration conversation has shifted from fears over jobs to fears over personal safety.

Those fears made the clashes over immigration in the latest GOP debate all the more intense. On Tuesday night, Florida Sen. Marco Rubio and Texas Sen. Ted Cruz each tried to make the other look willing to endanger Americans' lives by being too lenient on immigration policy.

In particular, Cruz slammed Rubio for his participation in crafting a compromise immigration bill in 2013. NPR decided to break it down, as a part of our ongoing fact check series.

"One of the most troubling aspects of the Rubio-Schumer Gang of Eight bill was that it gave President Obama blanket authority to admit refugees, including Syrian refugees without mandating any background checks whatsoever." — Ted Cruz in Tuesday's CNN debate

NPR reached out to the Cruz campaign for information supporting this argument but received no response. However, the Cruz campaign has pointed to an article by the Conservative Review's Daniel Horowitz to back up this claim, according to FactCheck.org. That piece referred to a few sections of the bill that in some way broaden laws surrounding refugees.

Immigration experts NPR spoke with focused mainly on the Gang of Eight bill's Section 3403 as the part they think Cruz is likely most concerned with. That section allows the president (with the input of the secretary of state and the Department of Homeland Security) to designate entire groups of people who could be eligible to come to the U.S. as refugees.

It can't be just any group, though; the bill says these must be groups of people "whose resettlement in the United States is justified by humanitarian concerns or is otherwise in the national interest" and also have traits that make them targets of persecution and, therefore, in need of refugee status.

That contrasts to existing law, which looks at refugees on a more individual basis.

"Under this Gang of Eight bill, what it says is the president may determine a group of people who can come as refugees," said Lavinia Limon, CEO of the U.S. Committee for Refugees and Immigrants, a refugee advocacy organization. "That's different because the Refugee Act of 1980 says the president can say he wants to bring in 10,000 Syrians, but each Syrian has to prove" their case for needing to be admitted as refugees.

But to get to Cruz's specific language: it's new authority, but is it "blanket authority"? Not exactly, says one immigration expert.

"It is not accurate to describe [this section] as giving the president 'blanket authority,' as the section spells out specific criteria that people must meet to be designated as refugees under the section," wrote Marc Rosenblum, deputy director of the immigration-policy program at the Migration Policy Institute, in an email to NPR.

Perhaps more importantly in the current, post-San Bernardino climate of fear, is Cruz's assertion that the bill would have brought in new refugees "without mandating any background checks whatsoever."

"The bill doesn't explicitly mandate any additional or more stringent background checks for refugees," wrote Cassie Williams, spokesperson for the Federation for American Immigration Reform, or FAIR, a group that advocates for tighter immigration laws, in an email (emphasis hers). "However, background checks are already a part of the refugee resettlement process, so refugees in a post Gang of Eight world would still be subject to them."

So, had Cruz said "any new background checks," he would have been right. But refugees let in under the Gang of Eight legislation would have had to go through a screening process that can last two years.

That process, as Limon told PolitiFact earlier this year, "is the most extensive security screening we have for visitors. It's easier to come in as a tourist, a student, a businessman."

Williams, for her (and FAIR's) part, thinks it's not enough, telling NPR that the current refugee checks "are not sufficient."

It's also possible that Cruz was referring to another segment of the bill, Section 3405, which allows stateless people to get legal status. But because it only refers to people already in the U.S., as one refugee resettlement expert told FactCheck.org (which dug into this section in greater depth), it wouldn't have created any new mass waves of refugees into the U.S.

The Gang of Eight bill would have given the president new authority to designate groups of refugees, but it wouldn't have let those refugees in without the usual background checks.

In an earlier version of this post, Cassie Williams' organization was incorrectly identified as Fairness and Accuracy in Reporting (FAIR). In fact, she is spokesperson for the Federation for Immigration Reform (FAIR).