Accessibility links
With Powerful Murals, Hale Woodruff Paved The Way For African-American Artists The pioneering African-American artist and teacher is the subject of not one but two exhibitions in Kansas City. His great nephew Shawn Hughes remembers him as reserved but with "an awesome presence." 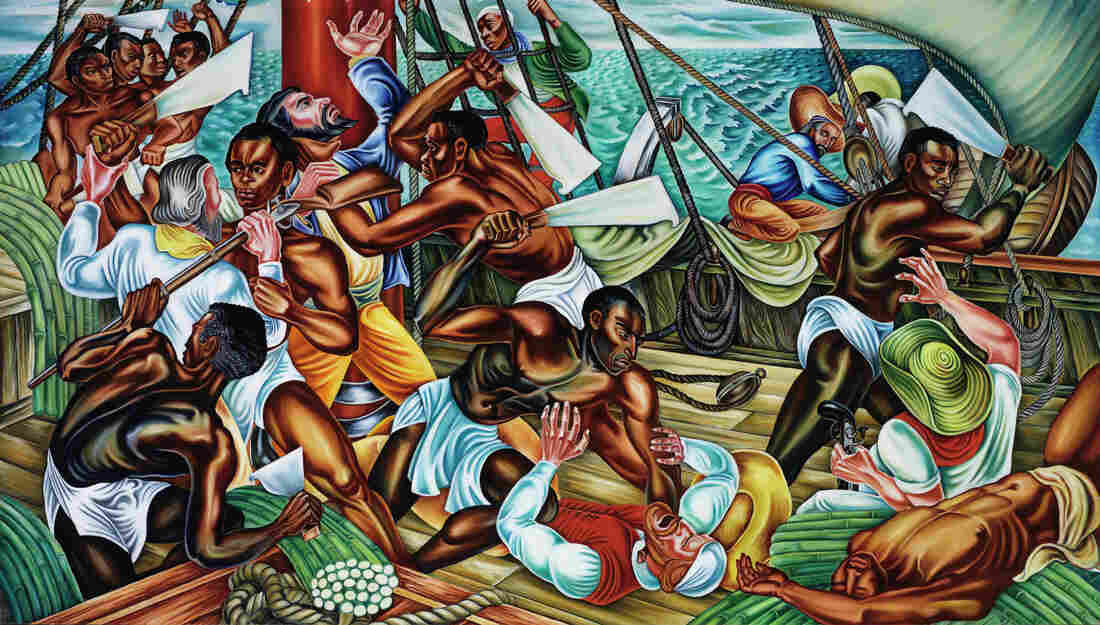 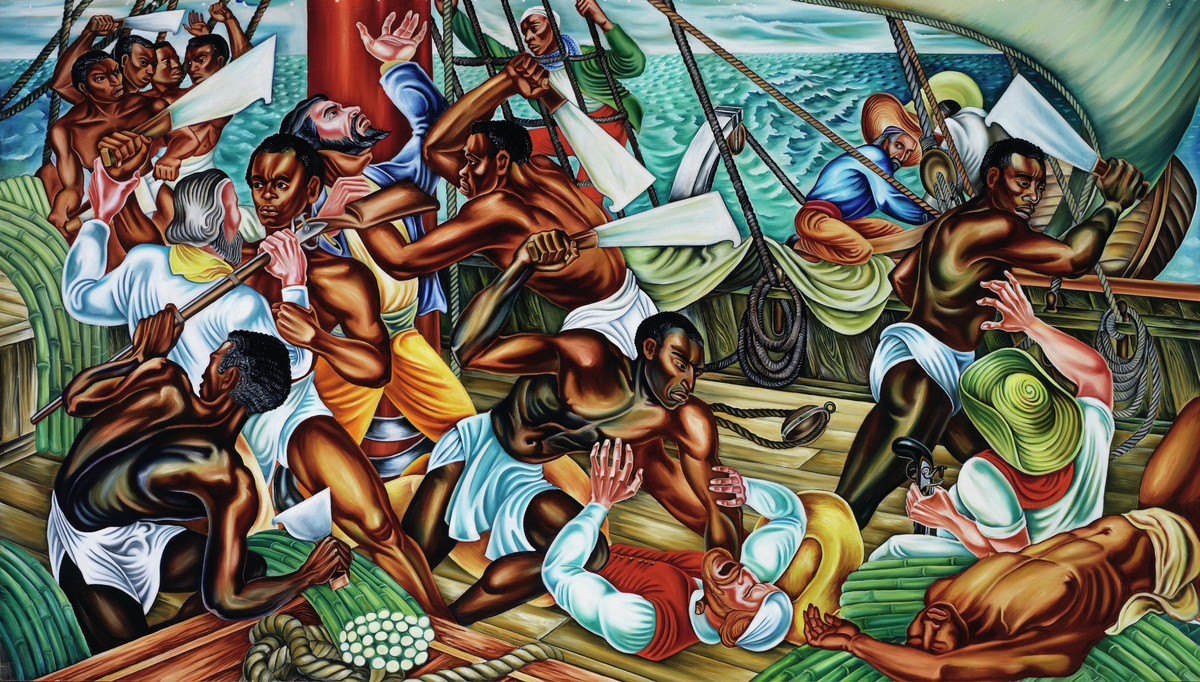 Artist Hale Aspacio Woodruff was commissioned to paint the Amistad Murals in 1938.

Most Americans know little about the painter Hale Woodruff, but he had a profound influence on 20th century American art. Like many black artists in the 1920s, Woodruff left the country for Paris. He later studied in Mexico with Diego Rivera.

Today Woodruff is best-known for a set of murals at Talladega College in Alabama. After a national tour, those murals have made a final stop in Kansas City, where Woodruff's family has roots.

Shawn Hughes, Woodruff's great nephew, stands in the Nelson-Atkins Museum of Art, surrounded by giant paintings in vivid colors with nearly life-sized figures. On one wall, a deck full of slaves is about to mutiny on the Amistad. On another wall, an urgent scene in the woods, as slaves are about to cross the Ohio River to freedom.

In the second mural, the trial of the Amistad mutineers, is a man in a green shirt in the crowd. It's a self-portrait of Hughes' great uncle, Hale Woodruff.

"He always puts his image in his works," Hughes says.

In this 1939 mural, Woodruff depicts the trial of the Africans aboard the Amistad. Peter Harholdt/Copyright Talladega College hide caption

This exhibition was organized by the High Museum in Atlanta back in 2012. Hughes has been to see the murals in New York and Washington, D.C., as well. Woodruff died when Hughes was a young man.

"He was a very sophisticated man," Hughes says. "Our family was very outgoing and gregarious, but he was very reserved, very quiet. I mean, he had an awesome presence about him." 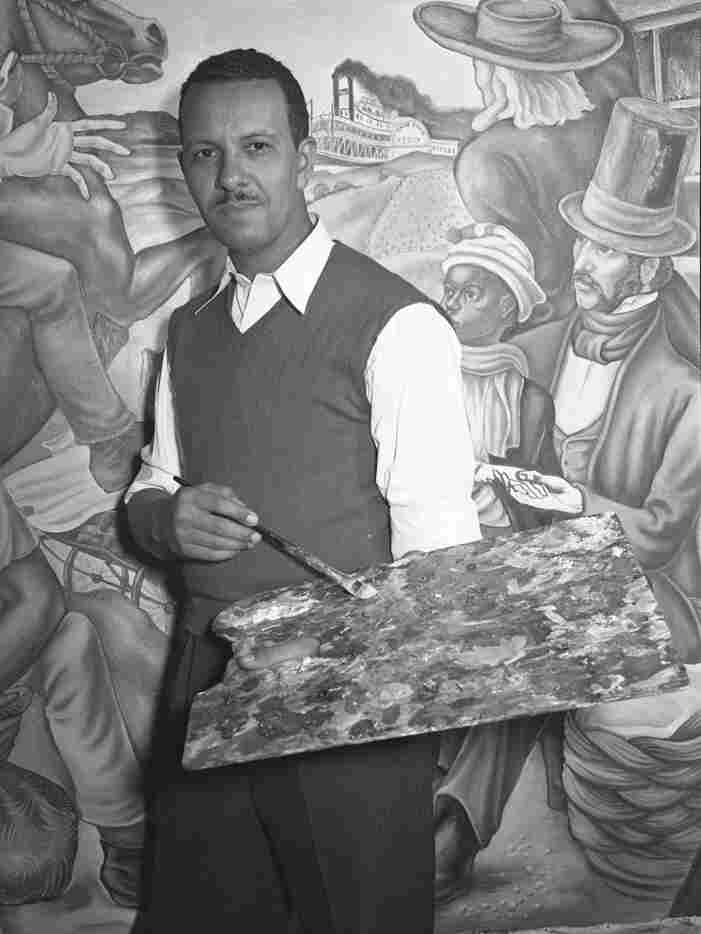 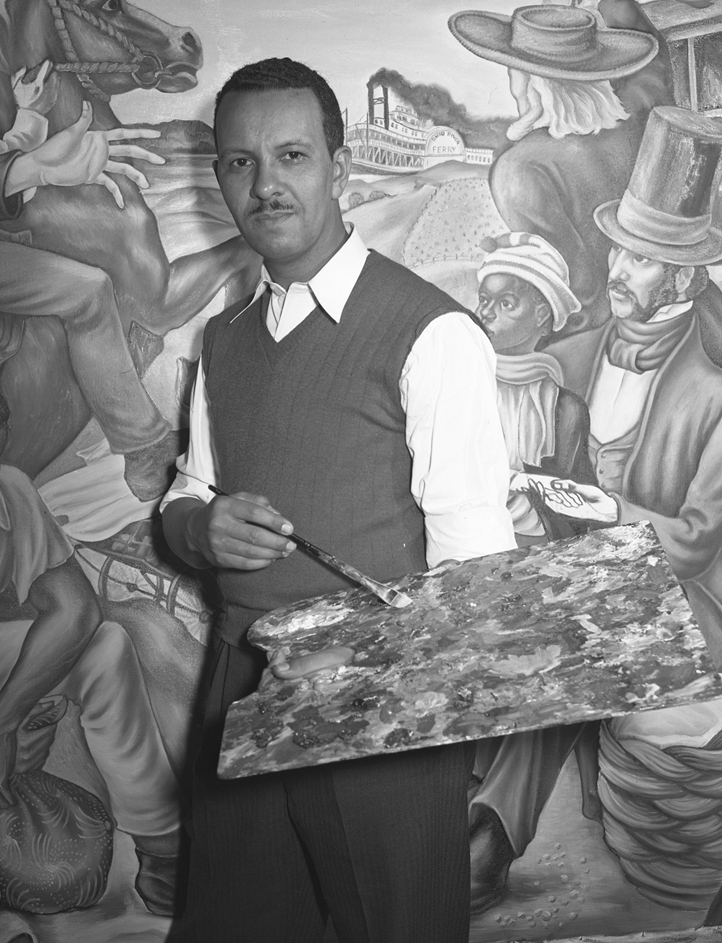 At Atlanta University, Woodruff founded what was known as the Exhibition for African American artists.

Growing up in Kansas City, Hughes knew about the famous muralist Thomas Hart Benton, who lived and taught there. And he learned about the European painters in high school. But he didn't learn about his great uncle's importance until he went to Fisk University in Nashville.

"First day I walk into the library. And as I walk into the library I look to my right, and they had a huge exhibit on Uncle Hale," Hughes says. "I was so excited about it I ran back to the dorm, called my mother collect, and I said, 'Mom, Mom, they got an entire corner dedicated to Uncle Hale.' She said, 'Yeah, now I want you to get off this phone and go read every book, and learn not only about him but learn about Aaron Douglas and the many other great African-American artists that are in the world.'"

Woodruff was a pioneer, says David C. Driskell, a distinguished art professor emeritus at the University of Maryland-College Park. Woodruff was one of the major art teachers at historically black colleges and universities at a time when there weren't that many people in that discipline, says Driskell.

In 1942, when Woodruff was at Atlanta University, he founded what was known as the Exhibition for African American artists. It "was the only venue where people of color could exhibit on a national scale without the forces of segregation," Driskell explains. 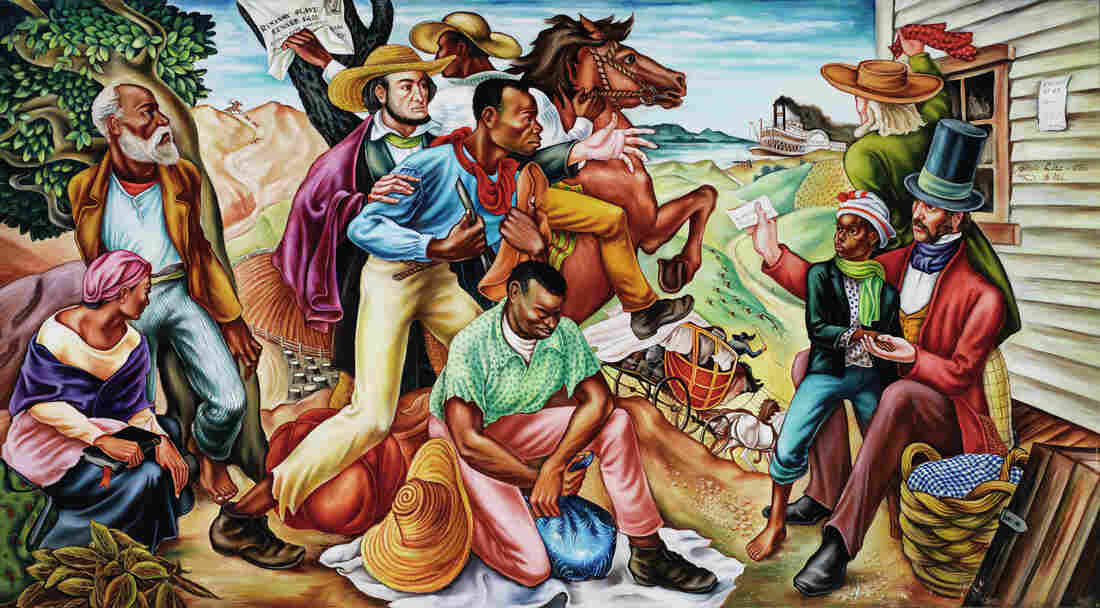 In his 1942 mural The Underground Railroad, Woodruff shows slaves about to cross the Ohio River to freedom. Peter Harholdt/Copyright Talladega College hide caption 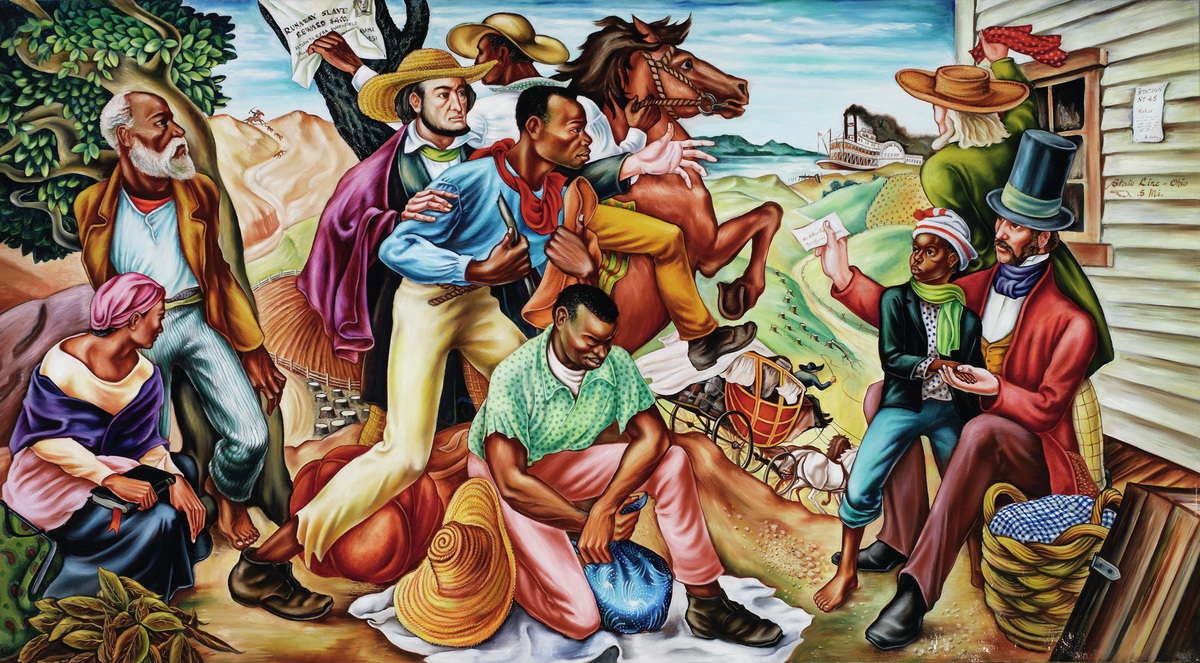 In his 1942 mural The Underground Railroad, Woodruff shows slaves about to cross the Ohio River to freedom.

This was a place where black artists could compete and have their work judged by a mixed jury of blacks and whites. Major artists like Romare Bearden, Jacob Lawrence and many others considered Woodruff a mentor.

"By bringing subjects of importance relating to the African-American experience to the American art canon, he was very much bent on helping to tell the history of African-Americans by painting murals," Driskell says.

Hughes organized another exhibition across town in the art gallery at the American Jazz Museum. This exhibition includes black-and-white prints and Christmas cards Woodruff painted for his relatives, abstract paintings and some of his black and white prints. Curator Sonié Joi Thompson-Ruffin says Woodruff deserves two concurrent exhibitions.

By the time Woodruff died in 1980 he was recognized by his peers in the art world. But he had a warning for his great nephew and niece.

Hughes remember sitting at Woodruff's feet. "He would draw something, my sister and I would be there drawing. He would tell us, yeah you guys got talent but it's not going to do you any good. He said, 'My paintings are not going to make any matter. The only thing it's going to do — it'll be worth something to you guys. He drilled that into my mom's head. He said, 'Yeah, they're really talented artists in their own right, but send 'em to law school."

Woodruff was wrong about one thing. His paintings did matter. 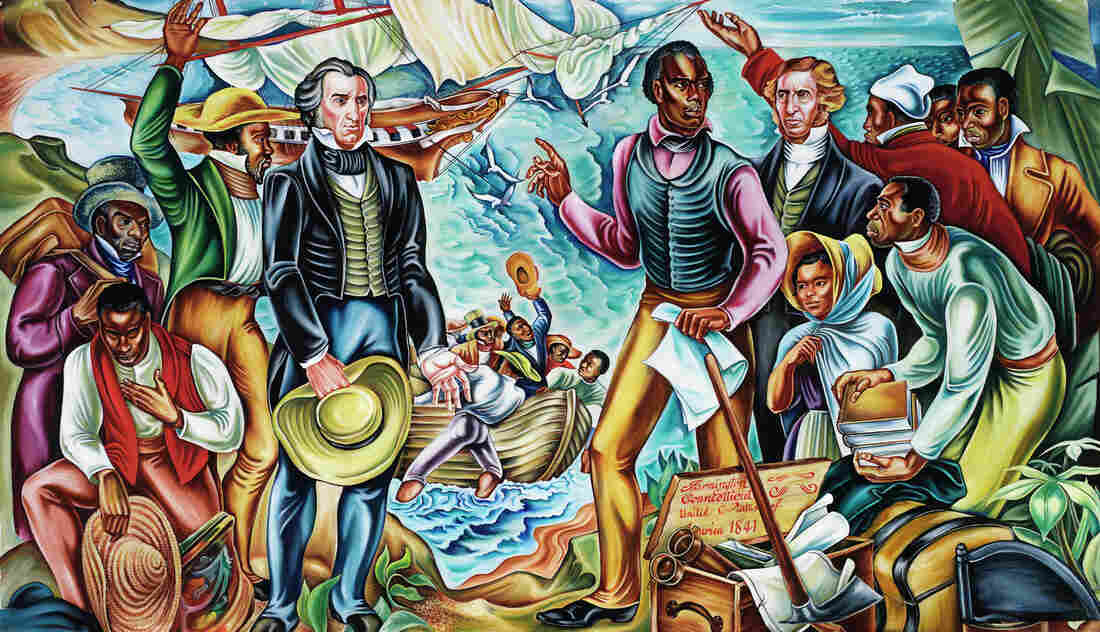