Accessibility links
Why Did Hillary Clinton Say The U.S. Is 'Where We Need To Be' In Syria? The statement received widespread criticism, given that ISIS still controls lots of territory inside Syria and inspired the recent attack in San Bernardino.

Why Did Hillary Clinton Say The U.S. Is 'Where We Need To Be' In Syria?

Why Did Hillary Clinton Say The U.S. Is 'Where We Need To Be' In Syria? 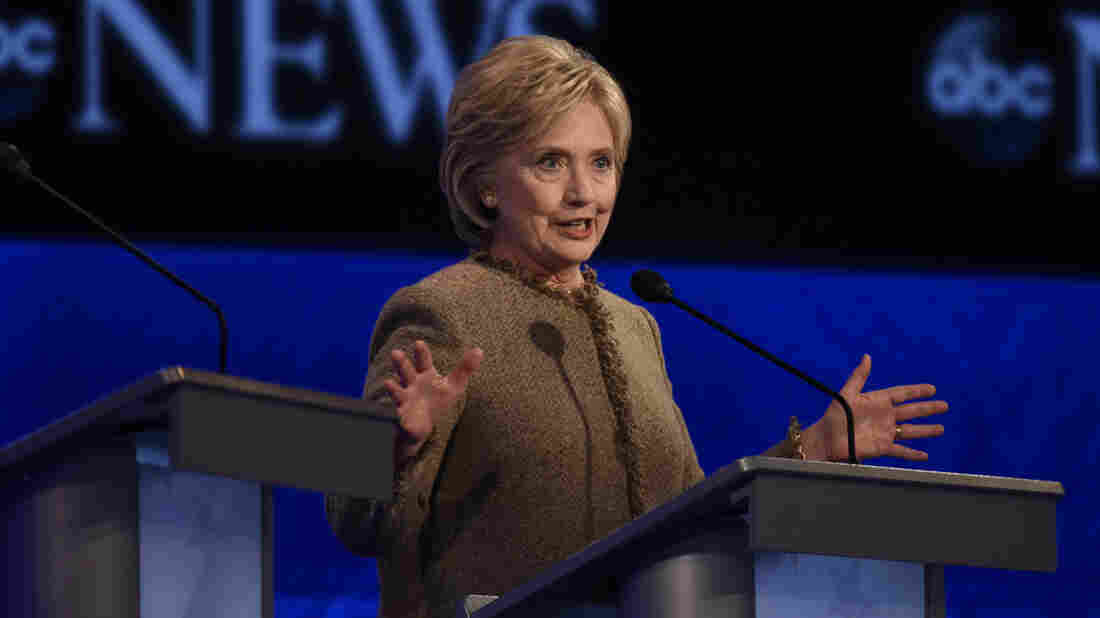 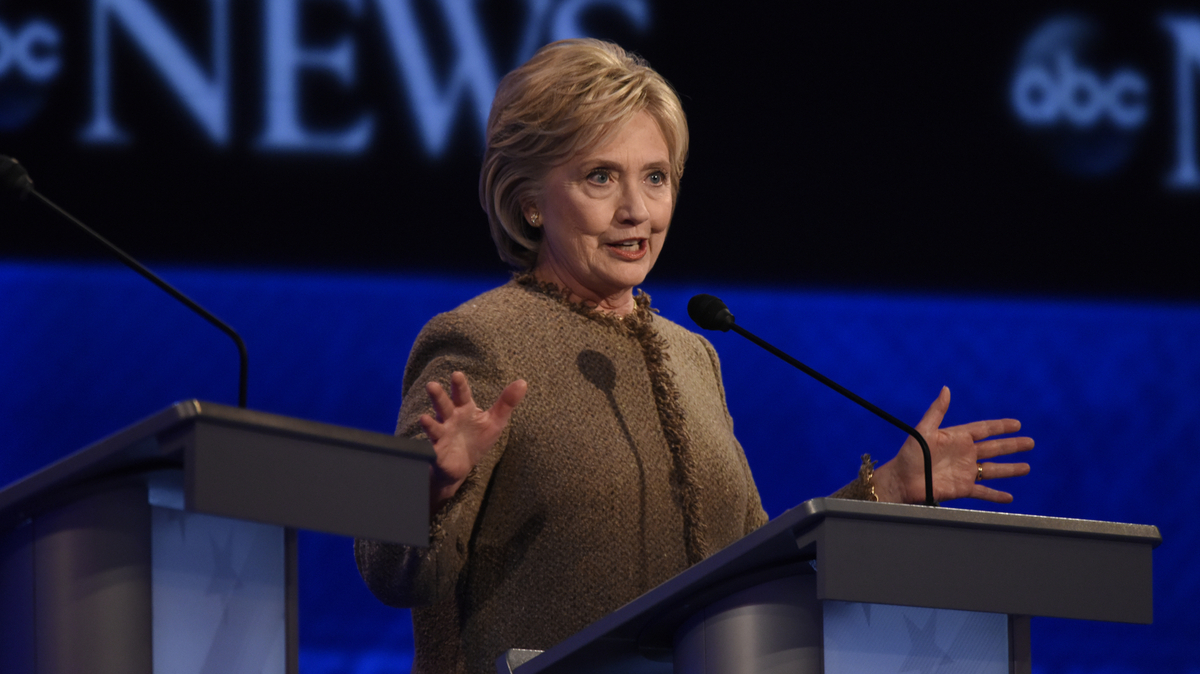 One of the statement's that got the most attention, and criticism, during Saturday's Democratic presidential debate was Hillary Clinton's assertion that "we now finally are where we need to be" in Syria.

Jeb Bush pounced, along with many others on the right, to call Clinton out on the assertion, given that ISIS still holds a lot of territory in Syria, and given the recent attacks in Paris and San Bernardino.

No @HillaryClinton - We are not "where we need to be" in fight against ISIS. #DemDebatehttps://t.co/PFPpF5lADy

But what's interesting furthermore are the two assertions Clinton made to back up her statement.

"We have a strategy and a commitment to go after ISIS, which is a danger to us as well as the region, and we finally have a U.N. Security Council Resolution bringing the world together to go after a political transition in Syria," she continued.

This fits with the strategy she argued for during the debate — going after ISIS and trying to bring an end to the regime of Bashar Assad simultaneously.

So let's look at what's behind each of those assertions.

"We have a strategy and a commitment to go after ISIS"

One of the most common attacks by Republicans on what they like to call the "Obama-Clinton foreign policy" is that there is no strategy to defeat ISIS.

Clinton, like many candidates on both sides, has a plan to defeat ISIS that mirrors much of what the Obama administration is already doing.

Airstrikes, which are being conducted by a U.S.-led coalition of Sunni nations in the Middle East and Western allies, are mostly carried about by American pilots, according to the Department of Defense.

That's about the extent of the commitment from other countries.

The candidates last night, and many of the Republican candidates in their debate on Tuesday, agreed that large ground forces are needed to defeat ISIS. But they believe those forces must come from Sunni Muslim countries in the region.

As moderator Martha Raddatz of ABC pointed out last night, the Obama administration has been trying to secure such commitments to no avail.

Clinton seemed to bring up more than candidates on either side the efforts to bolster local fighters in Syria. She pointed out that as Secretary of State under President Obama, she advocated that the U.S. arm what it deemed the moderate opposition, "because I worried we would end up exactly where we are now," Clinton said.

It is her most direct argument to separate herself from Obama's foreign policy, which receives low marks from the American public.

Having Clinton say in the same debate that she was worried that "we would end up exactly where we are now" and "we now finally are where we need to be" in Syria seems ripe for a Republican attack ad down the road.

Clinton has also argued for better efforts to wage an ideological battle against extremists. State Department initiatives, including those undertaken when Clinton was Secretary, have been widely deemed insufficient.

She said as much in a speech last week laying out a plan to defeat ISIS. "We need to step up our game, in partnership with the private sector and credible moderate voices outside government," Clinton said.

That's in addition to calls from Clinton and other candidates on both sides for the technology sector to work with government to blunt ISIS's online recruitment efforts.

"We finally have a U.N. Security Council Resolution bringing the world together to go after a political transition in Syria."

Just a month ago, Hillary Clinton said that the U.S. should prioritize taking down ISIS, then turn to the political transition in Syria.

Last night, she turned away from that position.

Bernie Sanders challenged her insistence on bringing about a political transition in Syria, accusing her of being too eager to seek regime change.

Sanders said, "It is not Assad who is attacking the United States. It is ISIS. And ISIS is attacking France and attacking Russian airliners."

Calling it a "false choice," Clinton explained why she believes the U.S. must simultaneously seek to defeat ISIS and forge a political future for Syria, post-Assad.

"We will not get the support on the ground in Syria to dislodge ISIS if the fighters there who are not associated with ISIS, but whose principal goal is getting rid of Assad, don't believe there is a political, diplomatic channel that is ongoing. We now have that," Clinton said during the debate, referring again to local forces inside Syria as essential to defeating ISIS.

What she's saying exists now is the resolution that passed the U.N. Security Council on Friday, which calls for negotiations on Syria's future.

Secretary of State John Kerry described the value he sees in the agreement: "This Council is sending a clear message to all concerned that the time is now to stop the killing in Syria and lay the groundwork for a government that the long-suffering people of that battered land can support."

Clinton was careful to say that world powers agreed "to go after a political transition in Syria," and not to sound overly optimistic that such a thing will be achieved.

An op-ed in the Washington Post last week, co-written by two former foreign policy advisers to the Obama administration, applauded the talks for bringing together countries with major stakes and influence in Syria: Russia, the U.S., Saudi Arabia, Iran and Turkey.

The countries involved did not agree on whether Assad should be ousted from power. The U.S. clearly says he must go, but not so the Russians. When the Russians started bombing in Syria recently, they mostly targeted areas held by rebels that the U.S. supports, instead of focusing on ISIS territory.

In the most recent talks, Russia was able to negotiate for a list of which rebel groups were considered terrorists, its justification for targeting them, and which were acceptable negotiators on Syria's political future.

The former Obama advisers, writing in The Washington Post, warned the talks in New York were taking on too much: "Pursuing a comprehensive framework seems a recipe for continued war, displacement and instability, all of which are fueling the radicalization behind the rise of the Islamic State."

By saying that a clear path for a political future in Syria is necessary to end the Islamic State, Hillary Clinton seemed to be arguing the opposite.