Accessibility links
Jennifer Lawrence Looks Back On A Career-Changing 'Yes-Or-No Question' Lawrence got her big break as Katniss in the Hunger Games series. She says concerns about the price of fame made her hesitate before saying "yes" to the role. She's now starring in the drama Joy. 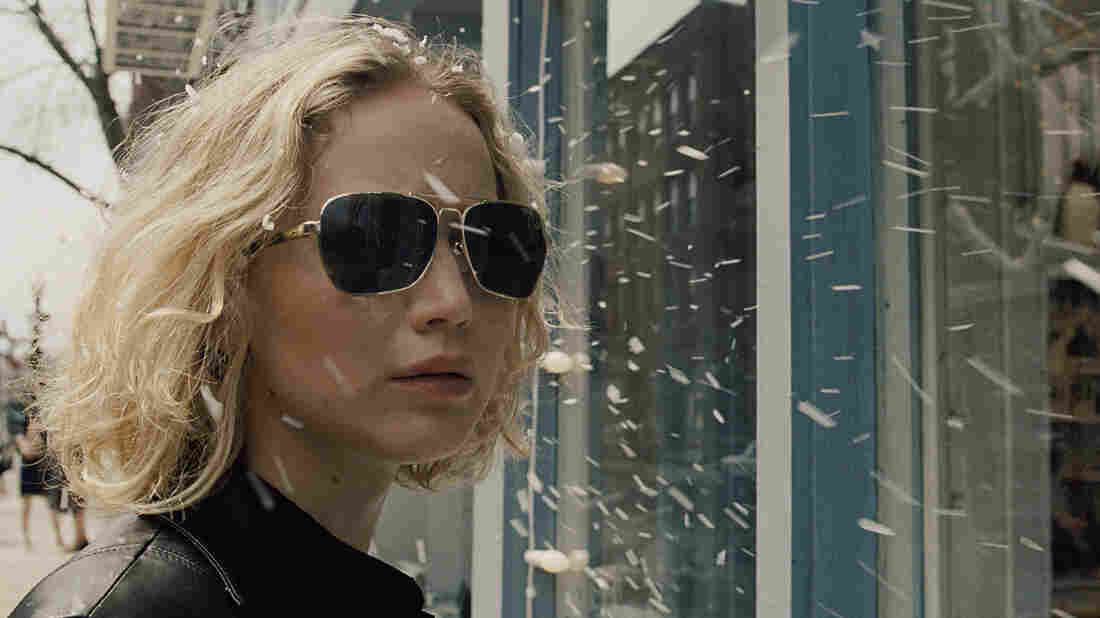 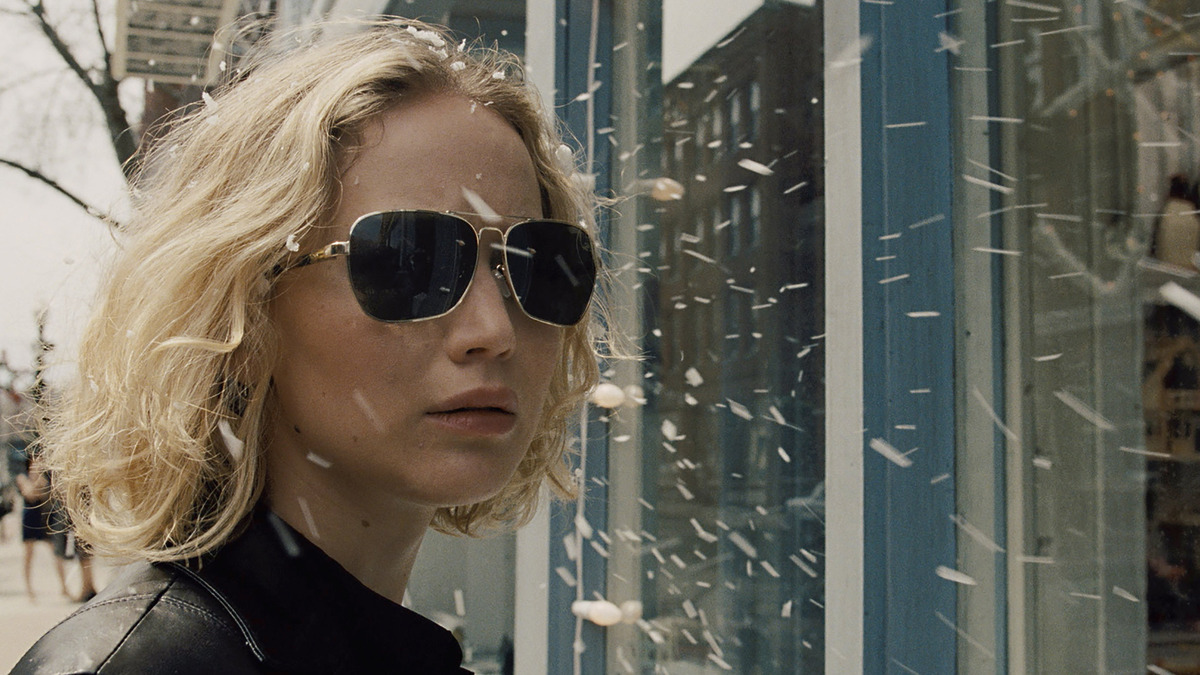 Jennifer Lawrence stars as Joy Mangano, the creator of the Miracle Mop, in the comic drama Joy.

Starring in the Hunger Games was the opportunity of a lifetime, but when the role of Katniss Everdeen was offered to her, Jennifer Lawrence hesitated.

"A yes-or-no question very rarely changes your entire life," Lawrence tells Fresh Air's Terry Gross. But in this case, she knew it would. The Twilight movies had just come out, catapulting its young actors into an extreme level of fame; Lawrence sensed that the Hunger Games series would do the same for her.

Lawrence worried that fame would affect her ability to go out in public or her future plans to start a family. She predicted her parents might have to move to a different, more private home (they eventually did). But then she thought about the character she would be playing in the films and she decided to go for it.

"I mostly just said, 'You know what? I love this character. I love this movie. I believe in it, and I'm going to say 'yes' for the same reasons that I would say 'yes' to any indie,' " Lawrence says.

Besides, Lawrence adds: "I'm a total homebody. ... I'm always looking for excuses not to go out. I can now use fame as an excuse." She laughs, "and I do."

Lawrence's latest film, Joy, is a comic drama about the woman who invented the Miracle Mop. "A lot of people have inventions or they have ideas and then they bring it to somebody else and they say, 'I have this idea [but] I don't know how to make it,'" Lawrence says. "But Joy grew up in a metal garage, so she was in complete control of all of her creations."

Joy is Lawrence's third film with director David O. Russell, who also worked with her in American Hustle and Silver Linings Playbook, for which she won an Academy Award for Best Actress.

Lawrence describes working with Russell as "hectic" and "nuts," but adds that the director's energetic style of shooting brings organized chaos to the screen. "You never know when the camera is going to move and be on you, so you are in the scene 1,000 percent the whole time," Lawrence says.

I always think it's annoying, but it's necessary. One time we were flying to New York together and I was fast asleep on a flight and all of a sudden there was an earbud shoved into my ear with music from Raging Bull and I was like, "What the?!"

But basically everything David and I argue about ... that I think is unnecessary — "David, I don't want to talk about the scene. I don't want you to go through the whole movie with me, I know what the movie is about! Let's go! I don't want to listen to this song" — when I see the movie and I see what he's doing and how he's put everything together, I'm always wrong. It'll always change something in some way that I didn't know. 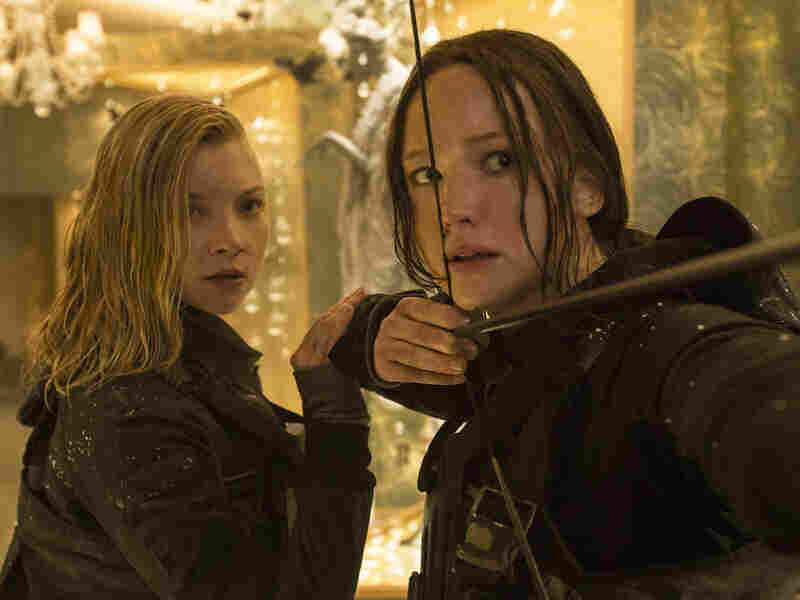 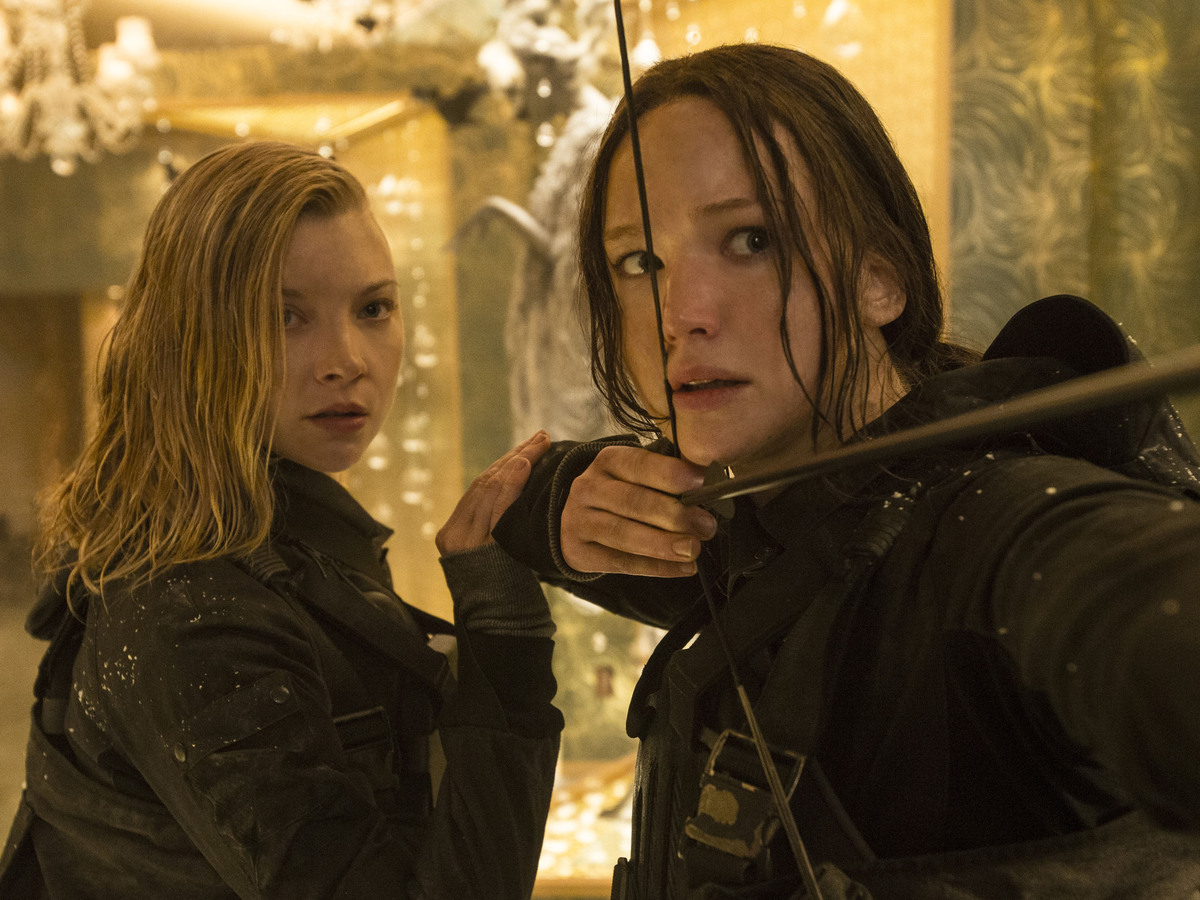 On learning archery for The Hunger Games

I really, really enjoyed archery. I had an amazing instructor, Khatuna [Lorig]. She was Georgian. She was an excellent instructor — very, very strict. If I had bad form, she would pinch my ear. She didn't really put up with anything. It totally changed my body. It was so crazy, when I went back for the fitting for the second movie for Catching Fire, my shoulders were 2 inches broader and my right arm is 1 inch longer than my left arm, permanently, I guess. But I really enjoy it.

On safety precautions while filming stunts

I always assume by the time I'm [on set] they've figured it out. There are some things in harness work that [scare] me as a woman. There's these bands that push against what I assume would be, like, my female organ area, I'm just like, "I don't know. This doesn't seem right to be hanging from this with this much pressure for hours." So I put my foot down about that the other day at work. I was like, "I have to be able to have children one day — I don't know if I want to hang from my uterus for four hours."

I was aware of gender inequality — of the 21 percent general pay gap between men and women — and when that [Sony] hack happened and I saw those numbers, I really didn't look at that and say, "Something unfair was done to me." I think that it's very possible when we're talking about this gender bias that it also exists in us as women. That we, it's very possible, as individuals, are doing this to ourselves, that we have a historical, global reputation that isn't being a baller or a badass or being aggressive, that's not attractive to do those things. ... If I'm having these feeling and it's my own kind of mentality that's getting in my own way, and these statistics are inarguable, maybe I'm not the only woman who feels this way. I figured if I had a voice I should use it in case there are other women out there that are not getting paid or not asking for money the way that they should be.

On hackers leaking nude photos of her

Those pictures were incredibly personal to me — and my naked body I haven't shown on camera by choice — it's my body. I felt angry at websites reposting them. ... I can't really describe to you the feeling that took a very long time to go away, wondering at any point who is just passing my body around. Who's got a picture of my body on their phone and is at a barbecue and looking at them. It was an unshakable, really awful feeling that after it healed a little bit made me incredibly angry.

On moving to New York as a teenager to pursue acting

I had saved enough babysitting money and I was like, "I'm going." So [my parents] tried to find a nice balance between me kind of running away and being completely unsafe and having a little bit of supervision. So I had a horrible apartment [in New York]; it was completely rat-infested. My brother, who was 18, went with me at first and my parents left us and we were both like, "We're going to die."

... Eventually my mom saw how happy I was and how I didn't have anxiety anymore, I didn't have all of these things that I had when I was in school ... I was so happy that I think it was kind of hard for her as a mother to send [me] back. ...

Night was horrible, that's when [the rats] all come out. I wouldn't go to the bathroom. My dad still talks about that. He says, "That's when I knew you were serious." I think that that was the turning point for my dad, letting me do this, because he came and saw the conditions I was living in. No hot water, there was no kitchen, it was a closet with a hot plate. ...

I went to Chinatown — that's where I got most everything, or Duane Reade. I didn't really have any money, so if a rat had eaten my loaf of bread, before when I first got there I [would have been] like, "Ew!" and throw the whole loaf of bread away, but eventually I was like, "God, I'm not going to be able to afford bread." So I started just cutting around the hole that the rat ate. I got to the point where I was literally sharing food with a rat. So that's when my parents were like, "Yeah, I think she really, really wants to do this."