Accessibility links
Cruz Tour Highlights Organization In SEC Primary States The conservative Texas senator is building a deep network of supporters in Southern states that will vote on March 1. 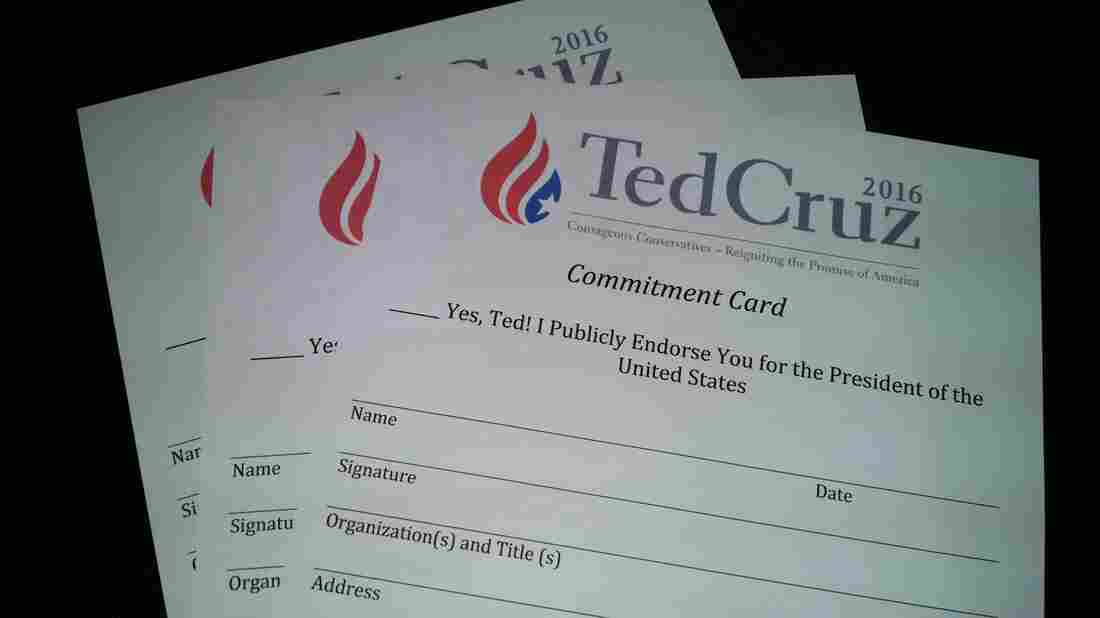 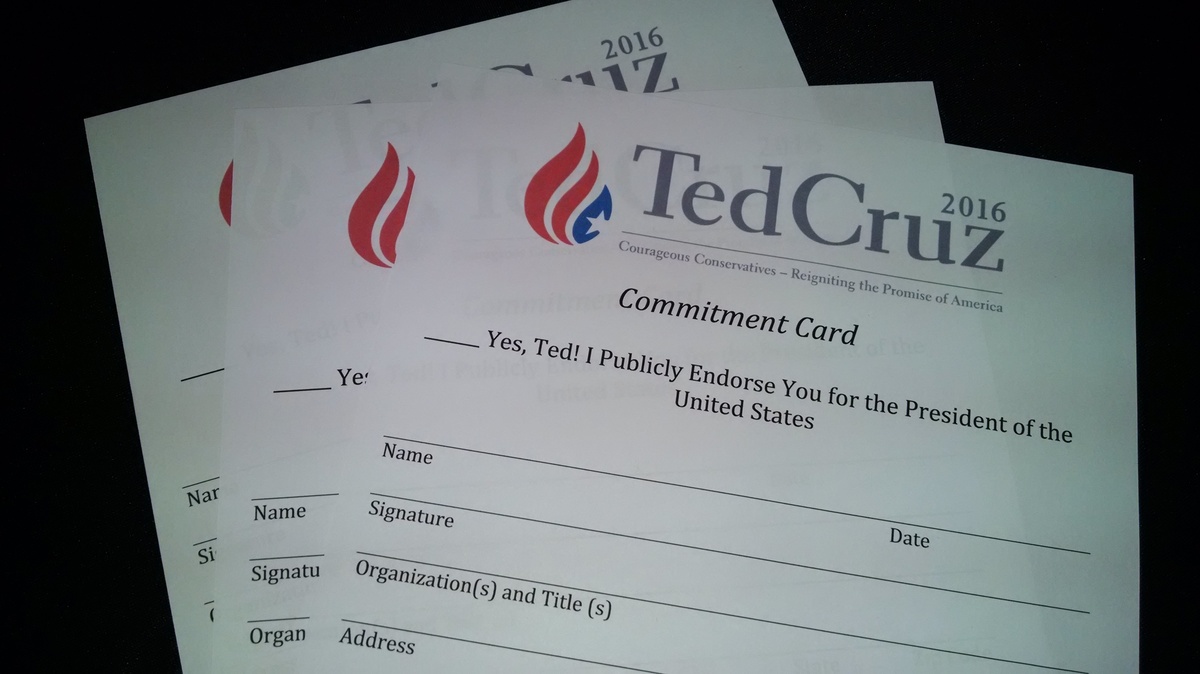 Commitment cards offered by the Ted Cruz presidential campaign during an event in Tennessee.

Republican presidential candidate Ted Cruz is making a big bet on building a strong organization outside the four early voting states of Iowa, New Hampshire, South Carolina and Nevada. The idea is to pick up a strong lead in delegates needed to secure the nomination when 14 states, mostly in the South, vote on March 1 in the so-called SEC primary.

One of the places Cruz is trying that strategy out in is Tennessee, where he'll stop on Tuesday, part of a multiday tour of states voting on March 1.

Last week, the center of his Tennessee campaign was a darkened hotel bar, where some of his biggest boosters in the state gathered to watch the most recent Republican presidential debate.

Cruz supporters were fired up by his feisty performance in the debate and pointed to the Texas senator's surge in the polls. 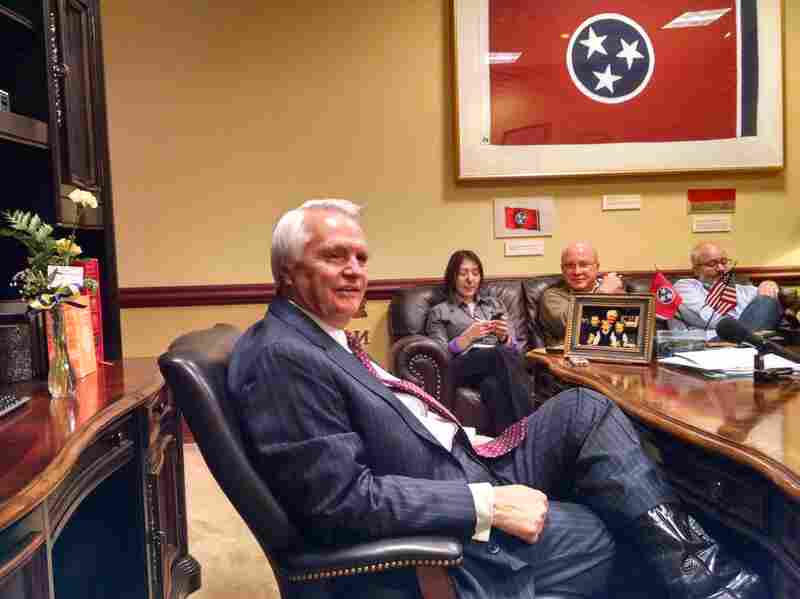 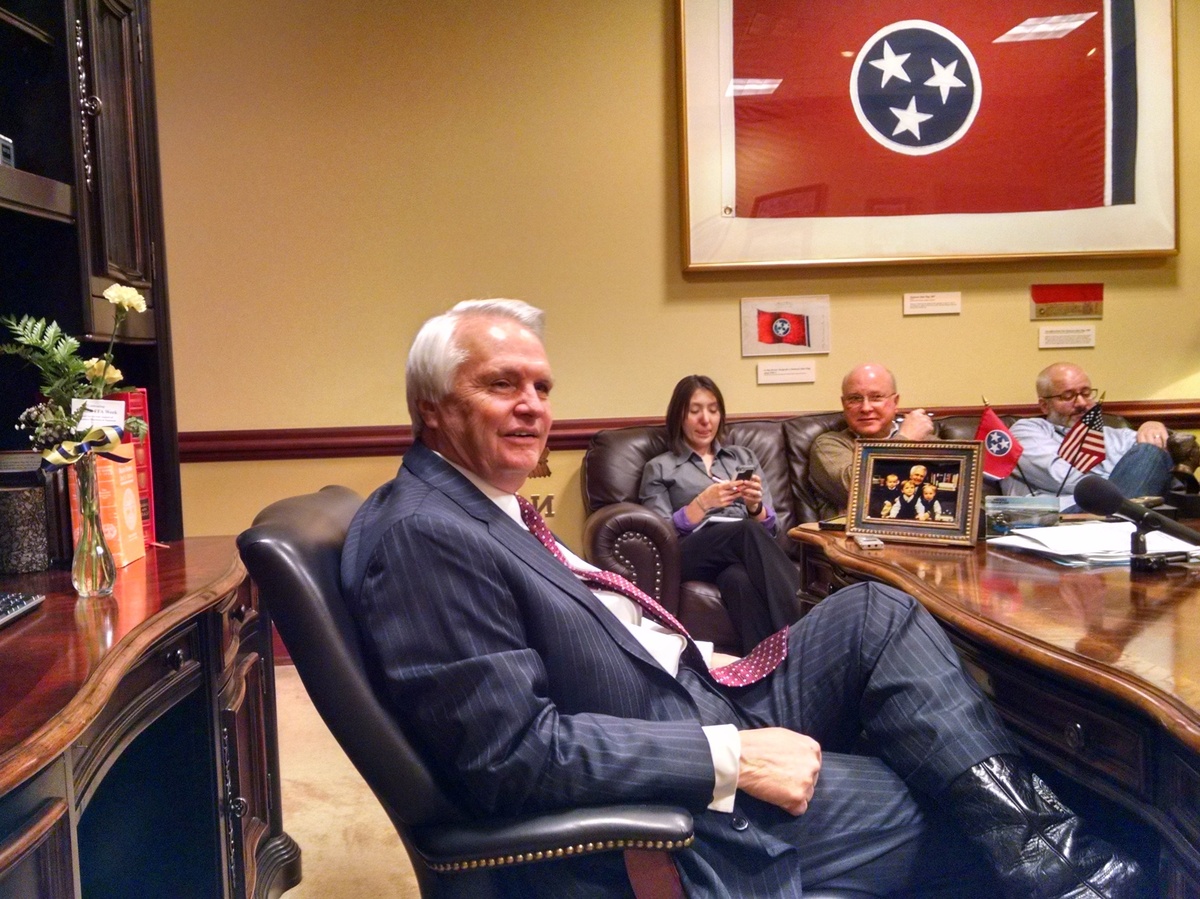 Tennessee Lt. Gov. Ron Ramsey believes Cruz is likely to win his state's Republican primary. Ramsey isn't endorsing a candidate but says Cruz is the "logical" candidate for many voters.

Four years ago, Snodderly worked for Rick Santorum's campaign, which won Tennessee, but he says conservatives connect better with Cruz. "People support Ted Cruz because they love him. In 2012, they supported Santorum because they weren't sure if they liked [Mitt] Romney," said Snodderly.

Cruz last came to Tennessee in August, back when he was polling in the single digits nationally. But his focus on immigration and national security already resonated with conservative voters. Even before the attacks in Paris and San Bernardino, Calif., Cruz talked about terrorism on the trail. Less than a month before Cruz's visit, a Tennessee-raised Muslim killed five servicemen in Chattanooga.

Cruz isn't the only Republican candidate who speaks to those concerns. But he's the only one with an organization strong enough to capitalize, says Steve Gill, a conservative activist and Cruz delegate.

"So as those other candidates fall off, where do the Carson people go? A lot of them are evangelical and they're going to go to Cruz. The Huckabee, the Santorum, lot of those folks, I think, are going to gravitate to Cruz as you move ahead," said Gill.

It's not just Cruz's supporters who believe he will surge to the front. Lt. Gov. Ron Ramsey is one of the state's most influential conservatives. He doesn't plan to endorse anyone in the primary but is also forecasting a Cruz victory. "My opinion, when people walk in there, have their finger half an inch away from the Trump button and say, 'This was fun, but nah.' And move over to somebody else. That's just my gut feeling, and I think the logical person there is Cruz," said Ramsey.

Ramsey says Trump's glibness and political incorrectness have grabbed attention but it will be Cruz's strong game plan that eventually carries the day.