Accessibility links
Analysis: Trump Tax Plan Boosts The Rich, Could Be A Drag On The Economy The GOP presidential candidate's tax plan could cost the government $9.5 trillion in revenues over a decade — and be hugely regressive, according to a new analysis.

Analysis: Trump Tax Plan Boosts The Rich, Could Be A Drag On The Economy

Analysis: Trump Tax Plan Boosts The Rich, Could Be A Drag On The Economy 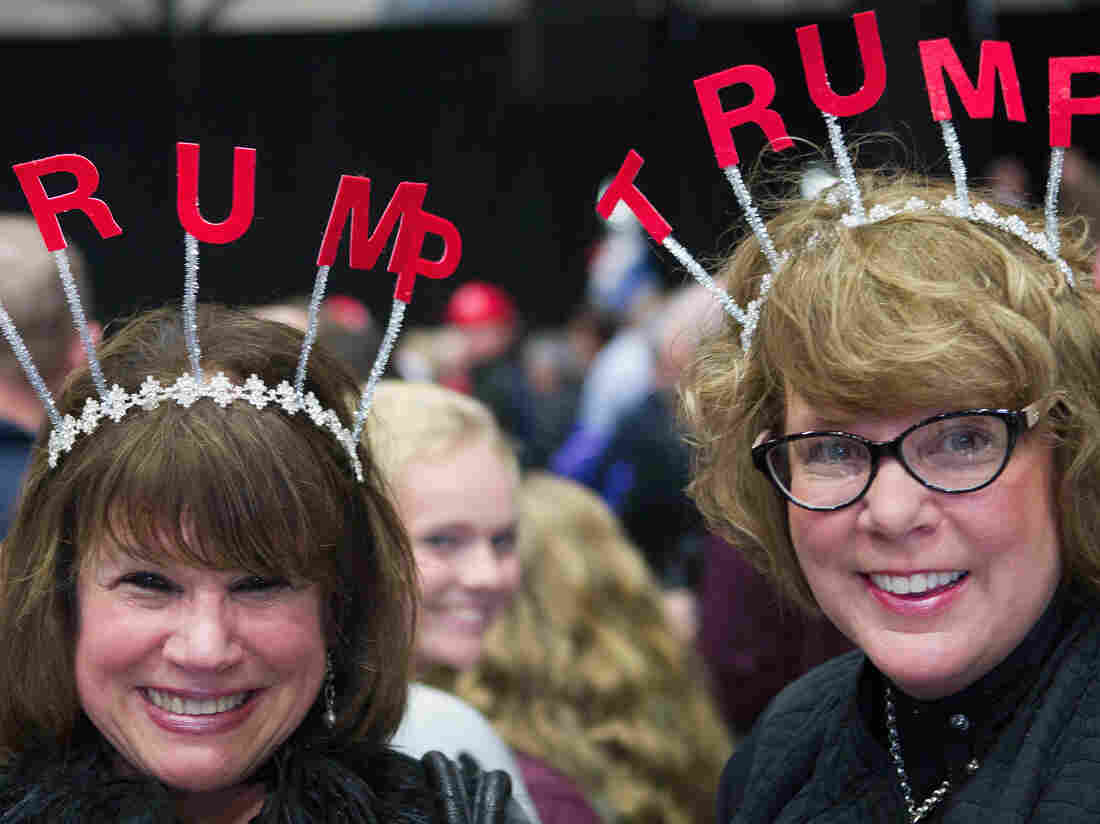 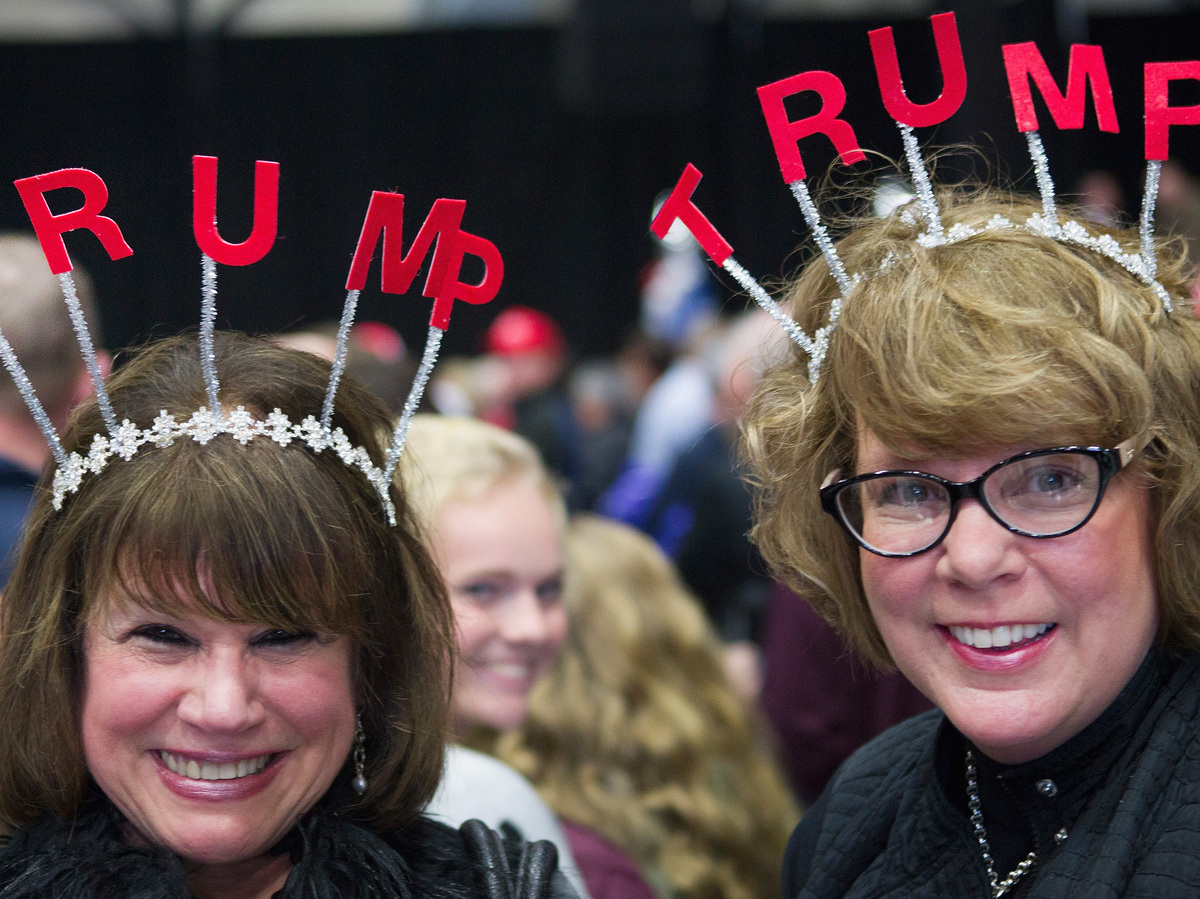 Two excited Trump supporters wait for the start of a campaign event on Monday in Grand Rapids, Mich.

"Pretty aggressive." That's how one might describe some of Donald Trump's political rhetoric. (Consider that the word of the day on the campaign trail Tuesday was "schlonged.") It's also how former Congressional Budget Office Director Douglas Holtz-Eakin described Trump's tax plan in September, when the reality TV star released it. (Read the details here.)

Today came an estimate of that aggression: $9.5 trillion. The Trump tax plan would cut federal revenues by $9.5 trillion over 10 years, according to the Tax Policy Center, a project of the left-leaning Urban Institute and Brookings Institution.

To put that in perspective, the U.S. debt held by the public is currently projected to hit 100 percent of GDP sometime around 2040, according to the Congressional Budget Office. Under Trump's plan, that debt-to-GDP ratio would hit 180 percent around 2036, TPC calculates.

This isn't the only analysis to find that Trump's plan would be hugely expensive; the right-leaning Tax Foundation said it would cost nearly $12 trillion in revenues over 10 years. The left-leaning Citizens for Tax Justice likewise put a $12 trillion price tag on it.

The costliest portions of the plan, according to TPC's analysis, would be his massive reduction in income tax rates (cutting the top rate from 39.6 to 25 percent), as well as the fact that he would roughly quadruple the standard deduction.

Altogether, the plan would increase the number of households not paying income taxes from 77 million (or 44 percent of households) to an estimated 110 million (63 percent).

TPC co-founder Leonard Burman told reporters Tuesday that his organization reached out to the Trump campaign to get more exact details of the plan, but the campaign did not answer any of its requests. 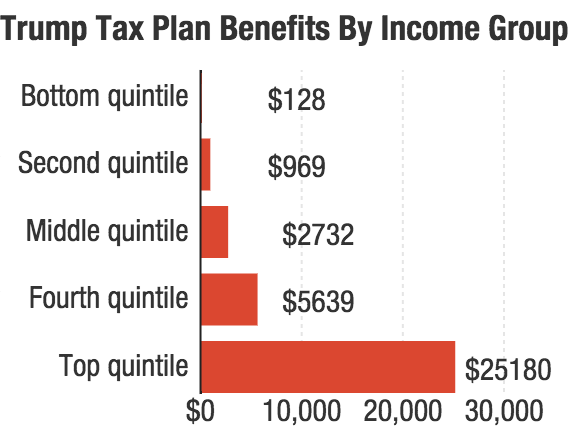 But here's one thing TPC can tell from the details Trump has released: It would overwhelmingly benefit the rich. Though the Trump tax plan would shrink the tax bills of people up and down the income ladder, the highest earners would by far reap the biggest rewards.

The benefits grow even steeper as you slice that top quintile into richer and richer segments. The top 1 percent would benefit to the tune of $275,000. The top one-tenth of 1 percent: $1.3 million.

That means Trump may have been wrong about how his tax plan would affect him, personally. When he released it, Trump said that the plan would cost him (and, presumably, other uber-high earners) "a fortune." Burman, however, said he couldn't see how that would happen, given the big tax cuts the plan gives to the richest Americans.

Leaving aside the plan's effect on Trump's own finances, the plan could be hugely detrimental to the national economy, Burman said. And that's because Trump's plan is so expensive. It might in the short term boost economic growth because it could encourage more spending and investing. But Burman added that a $9.5 trillion hole would require "implausibly large" spending cuts.

Adding all of that debt would risk slowing economic growth to a sputter (or worse). A massive increase in government debt could send interest rates climbing, which would be a drag on growth.

TPC's estimates are static, not dynamic — that is, they do not take into account the potential effects of economic growth. And Trump has indicated that his plan would pay for itself by boosting the economy. But it's hard to see how that would happen.

"[A tax cut] won't pay for itself. You're not going to cut taxes by a dollar and get a dollar back in revenue from the growth," Holtz-Eakin told NPR in October.

So to show how his tax plan would work, Trump would have to be "pretty aggressive" in cutting spending as well — perhaps prohibitively so.

"In 2025 alone, [Trump's plan] would increase the annual deficit by $1.1 trillion," as TPC's Howard Gleckman wrote in a Tuesday blog post. "To prevent his plan from adding to the deficit that year, Congress would need to cut all projected non-interest spending by one-fifth."