Accessibility links
Can't Vote But Campaigning Hard For Presidential Candidates Some young immigrants whose parents brought them to the U.S. without papers are working for Democratic candidates who support a path to citizenship for them. 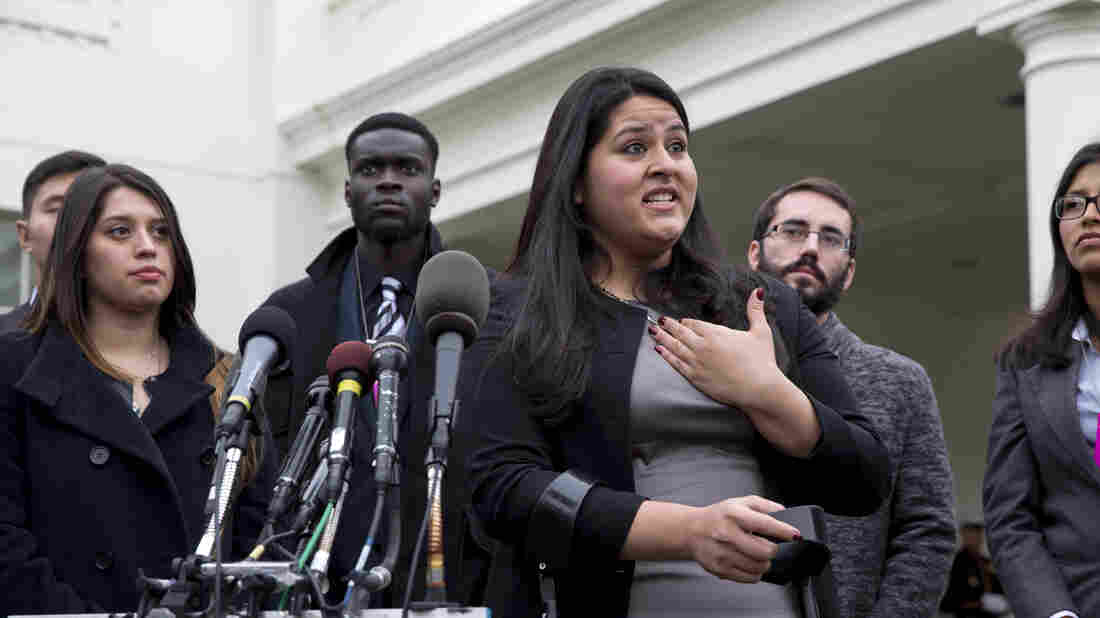 Lorella Praeli speaking to reporters at the White House in Dec. 2014. Praeli, who arrived in the U.S. as an undocumented immigrant, is now a top official in Hillary Clinton's presidential campaign. Jacquelyn Martin/AP hide caption 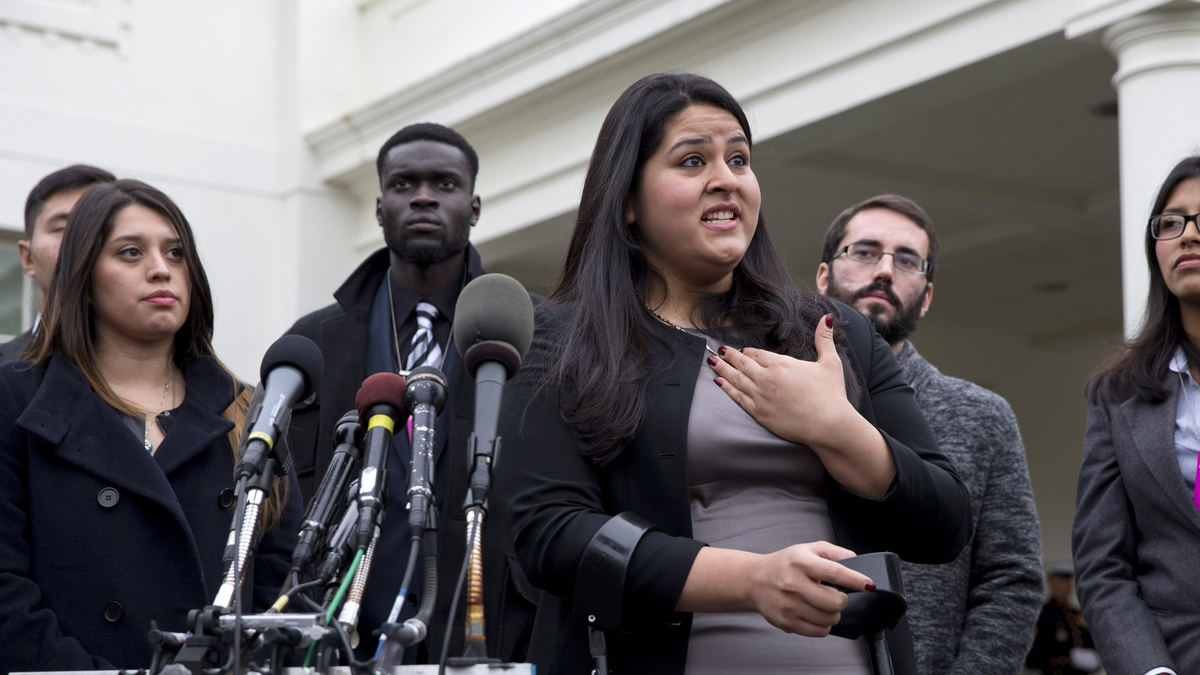 Lorella Praeli speaking to reporters at the White House in Dec. 2014. Praeli, who arrived in the U.S. as an undocumented immigrant, is now a top official in Hillary Clinton's presidential campaign.

Sisa, a 21-year-old who attends Chandler-Gilbert Community College, is so passionate about the Vermont senator and Democratic presidential hopeful, she was rooting for him to run for president long before he announced his candidacy.

On a recent Friday evening in downtown Phoenix, Sisa and other volunteers set up a Sanders table at the city's monthly art walk. They propped up a life-size cardboard cutout of the candidate, chanted "Feel the Bern!" and registered fellow Sanders supporters to vote in the primary. 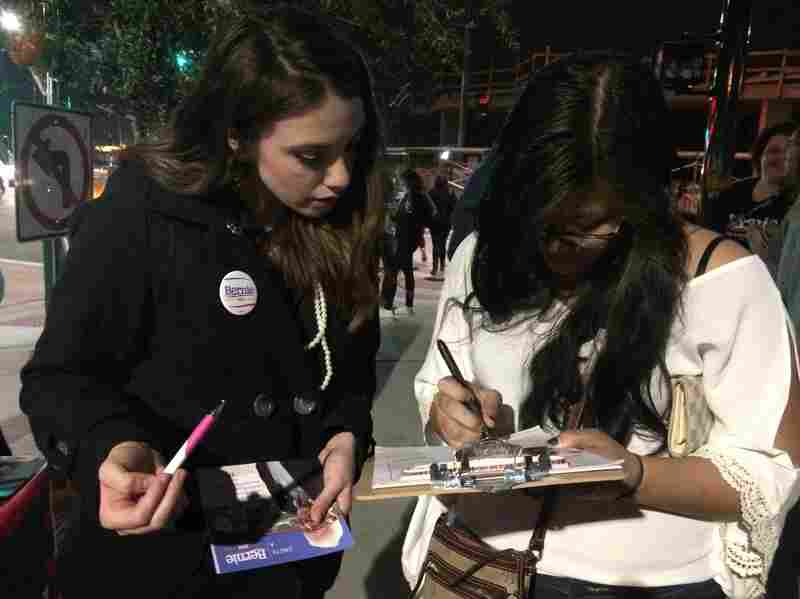 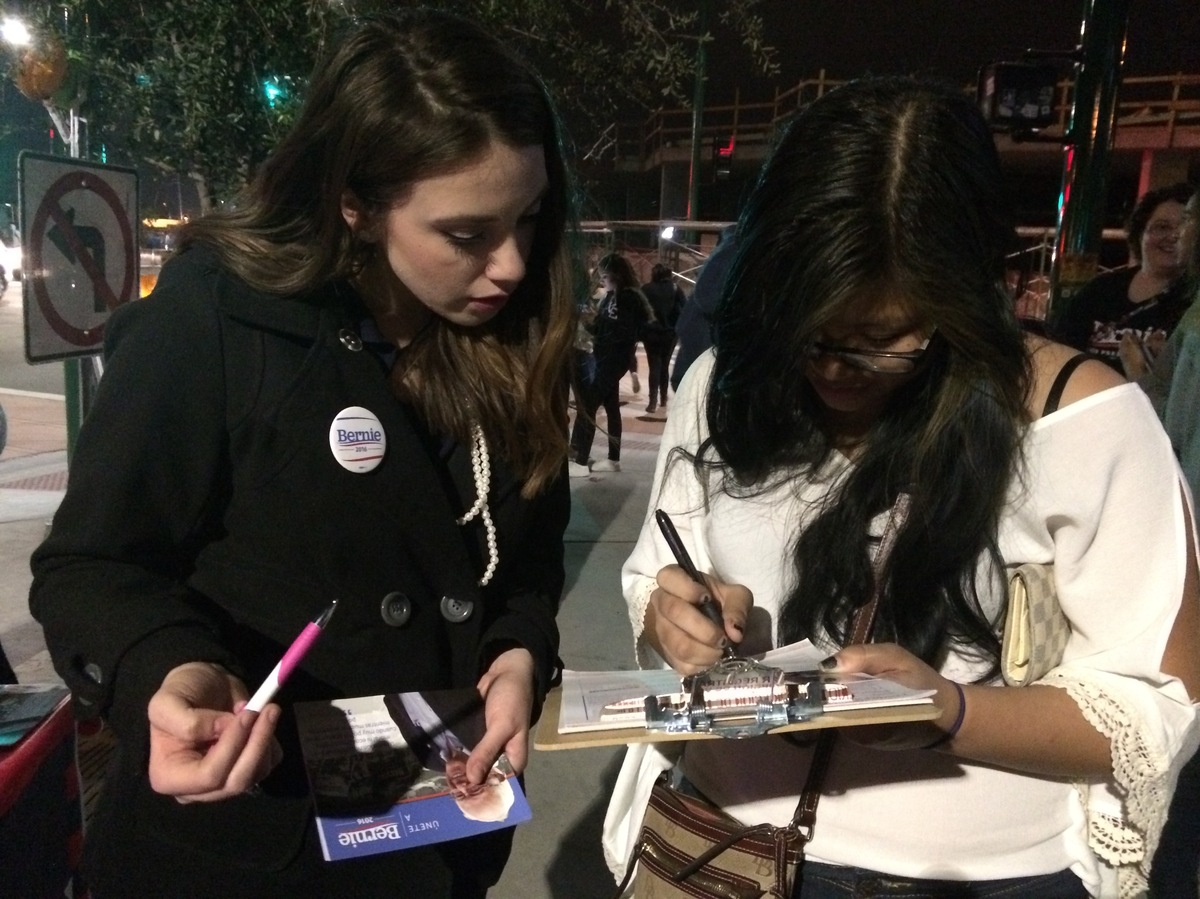 Volunteer Belen Sisa registering voters for Democrat Bernie Sanders in Phoenix, Az., last month. Sisa, who is not a U.S. citizen, recently accepted a job with the Sanders campaign.

But even though Sisa is happy to volunteer for Sanders on a Friday night, she herself won't be voting for him.

Sisa is not a citizen, and there is no path for her to become one. She's a so-called DREAMer — she grew up undocumented in Arizona after her family came here from Argentina.

"The way that I see it is, I am one person and I can't vote, but if I get 10 people to vote that means a lot more than my vote alone, whenever I can vote," Sisa said.'

One reason Sisa likes Sanders so much is his immigration platform. It includes proposals to keep immigrant families together and allow certain immigrants who were deported "unjustly" to return.

Sisa, who was finishing high school at the time, realized other undocumented young people a few years older than her had helped pave the way for that victory.

For years, young undocumented immigrants lobbied Congress to pass the Development, Relief and Education for Alien Minors Act, or the DREAM Act, a bill that would give them an eventual path to citizenship. The term "DREAMers" was coined as a way to describe the immigrant youth who would have benefited from the bill. DREAMers came out of the shadows, told their stories, traveled to Washington, D.C, and engaged in acts of civil disobedience.

"President Obama didn't take action because he felt bad, or because he just woke up one day and said he wanted to pass DACA," Sisa said. "It was because there were brave people who came before me, got arrested, they got to the White House, they pushed."

Work permits have allowed these young immigrants to get involved in politics in new ways. This election cycle, prominent activists from the DREAMer movement are taking on key roles in Democratic presidential campaigns.

DREAMer activists Erika Andiola, 28, and Cesar Vargas, 32, head Latino strategic outreach for Bernie Sanders. They are co-founders of the Dream Action Coalition and have been at the forefront of DREAMer issues in their respective home states of Arizona and New York. They joined the campaign this fall and helped craft Sanders' position on immigration.

Last May, Hillary Clinton tapped Lorella Praeli to head Latino outreach for her campaign. The 27-year-old DREAMer is the former director of advocacy and policy for the immigrant youth rights network, United We Dream.

"Five years ago, you would never see someone undocumented be hired by such a high profile campaign," Sisa said. "And now to win the campaign, they need them."

Praeli's family came to the U.S. from Peru when she was a child. At first they came on visits so Praeli could get medical treatments at American hospitals. When Praeli was just 2 years old, she was in a car accident and had her right leg amputated. The family overstayed their visa and became undocumented.

After fighting for in-state tuition for undocumented students at Connecticut's public colleges and universities, Praeli moved to Washington, D.C., to work for United We Dream, where she was a leading voice pushing the president to use executive authority to defer deportations.

When Obama announced last year that he would expand upon the 2012 DACA program to also shield the undocumented parents of American citizens from deportation, Praeli was in the audience. But her excitement turned to frustration when Republican governors blocked the program in the court.

That was the point at which Praeli decided she wanted to use the organizing tactics she had learned as an activist to get Clinton elected as the next president.

Praeli herself just became a citizen. She was able to adjust her status after she married her husband, an American. She'll vote for the first time in the New York primary for her boss.

Praeli said there is "nothing more beautiful or powerful" than finally being recognized by the country she calls home.

"It is my deepest desire for every undocumented person in this country to get to experience what I've been going through," Praeli said.

Martin O'Malley's campaign does not have a DREAMer on staff, according to a spokesman. But the campaign picked Kenia Alejandra Calderon, a DREAMer who is a junior at Drake University in Iowa, to serve as a surrogate and promote the candidate.

Democrats "Lean In" On Immigration Policies

The three leading Democratic presidential candidates vary in their immigration platforms but all support a path to citizenship for the undocumented. They have each pledged to expand upon Obama's executive actions for undocumented immigrants if Congress fails to pass immigration legislation.

In this primary, the Democrats have moved away from "enforcement first" language on immigration, said Ben Johnson of the Washington-based American Immigration Council, an advocacy group that says it's for "sensible and humane" immigration policies.

"The Democratic party is not having same existential crisis that the Republican party is having when it comes to immigration," Johnson said. "And in fact they have leaned into the issue in some very, very powerful ways."

Johnson said DREAMers helped shift the immigration debate, and it makes perfect sense that presidential campaigns are hiring them.

"What the DREAMer movement has done, the way they have organized themselves proves them to be enormously effective political organizers," Johnson said. "They are good at what they do."

As for Bernie Sanders volunteer Belen Sisa, she just got hired to work for the campaign in Las Vegas.

"To able to finally have a job with the campaign is like a dream come true for me," Sisa said.

And whether Sisa's other dreams come true — of ultimately becoming a citizen and one day voting herself — could be determined by who wins the White House in 2016.