Accessibility links
Why One Latino Group Is Chasing High Schoolers Ahead Of 2016 There are more than 25 million Latinos eligible to vote, and that number is growing quickly. The bulk of that growth is not from new immigration, but rather from Latino teens turning 18. 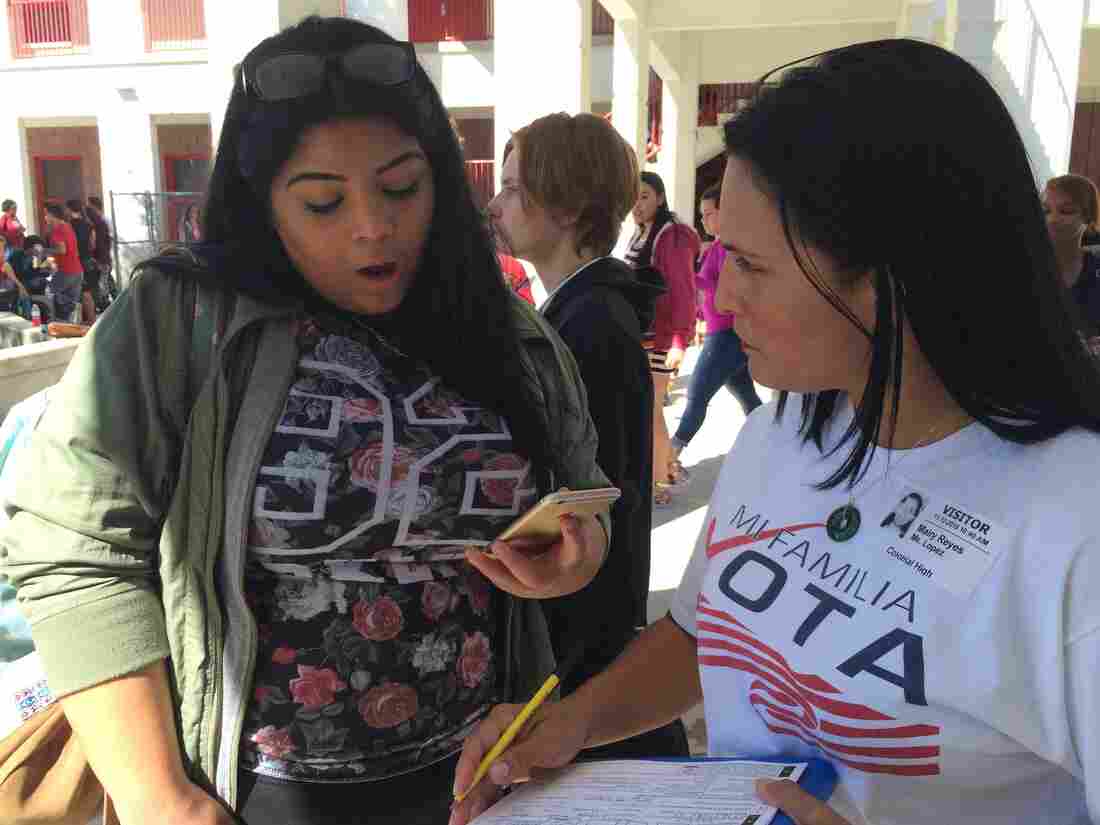 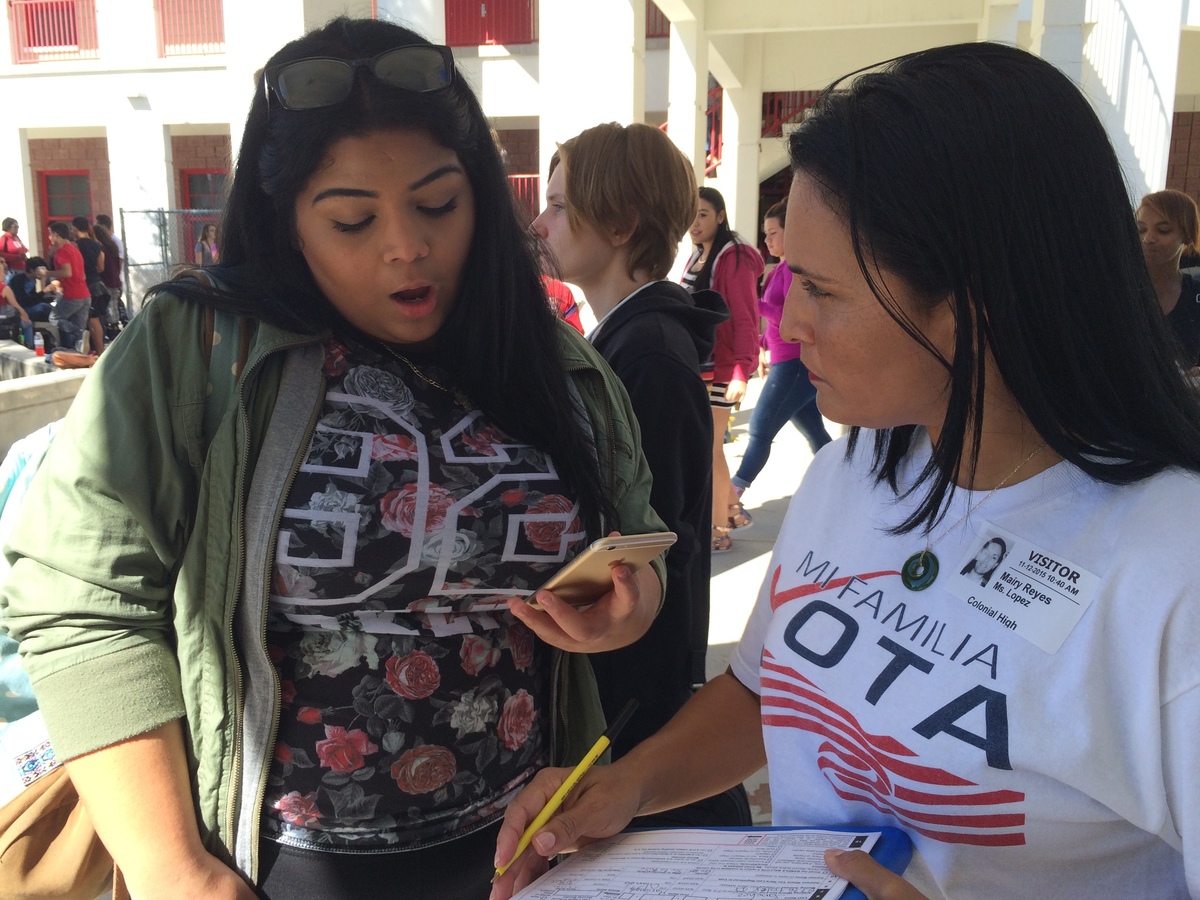 Over 25 million Latinos are eligible to vote.

And, each year, that number grows because hundreds of thousands of Latinos turn 18. Hispanics are one of the youngest racial or ethnic groups in the country.

To understand what that could mean politically, it's useful to look at projections from the Pew Hispanic Center, which has estimated that 40 percent of the total growth in the eligible U.S. electorate between 2012 and 2030 is likely to come from Hispanics.

At Colonial High School on Orlando's east side, about 80 percent of the students are Latino.

Floridians are allowed to preregister to vote at 16 or 17, which is why groups like the nonpartisan but left-leaning Latino civic engagement organization Mi Familia Vota are working in high schools.

On a recent morning, Mi Familia Vota was specifically targeting juniors and seniors, encouraging them to sign up to vote during lunch.

Emelyn Mendez, 17, filled out a form with her friends because she said she wanted to "have a say in what happens in the government."

In between bites of a sandwich, Mendez explained that she's really worried about one candidate in particular — Donald Trump.

"I wanted to have a voice because of Donald Trump talking against Hispanics and all that."

"He's terrible, the things he says — especially about the Hispanic community. That's very disrespectful," she said. "And I think a man who discriminates against people shouldn't be president."

Those feelings are something Mi Familia Vota taps into, albeit indirectly.

"Our vote is our voice, and it's very important to use our right," Mairy Reyes, a civic engagement officer with the group, told a group of students in Spanish.

In addition to the lunchtime voter registration drives, Mi Familia Vota often goes into classrooms to teach kids about the importance of voting.

"All of us are Hispanic, and we're aware of what's happening within our community," Reyes told an AP Spanish class. "This is the most important election this country has ever had."

How the candidates and their campaigns talk about Latinos is important to many first-time voters, such as Yaisha Hernandez, whose family moved from Puerto Rico when she was in elementary school.

As Puerto Ricans, her family members are eligible to vote, but they don't, Hernandez said. She decided to give voting a try after learning about the process in school.

"In my AP government class, we've been talking about the elections, and I wanted to have a voice because of Donald Trump talking against Hispanics and all that," she said.

Like a lot of other young people, Hernandez is also worried about college affordability. She wants to study music education and is eager to find a candidate who will make it easier to graduate from college without debt.

Another student in the class, Neil Rios, agreed that college costs are a huge priority. 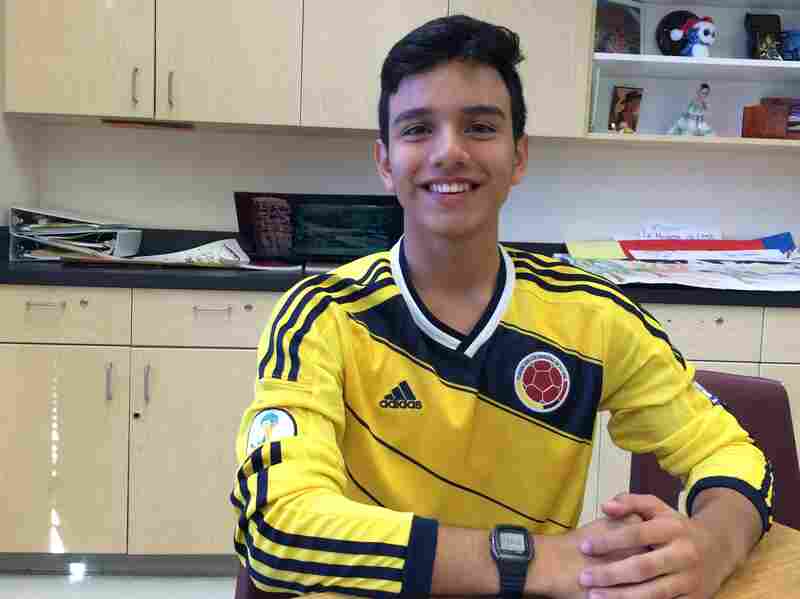 Neil Rios, 17, said college affordability and immigration reform are important issues for him. He signed up to vote and persuaded his mom to register, too. Asma Khalid /NPR hide caption 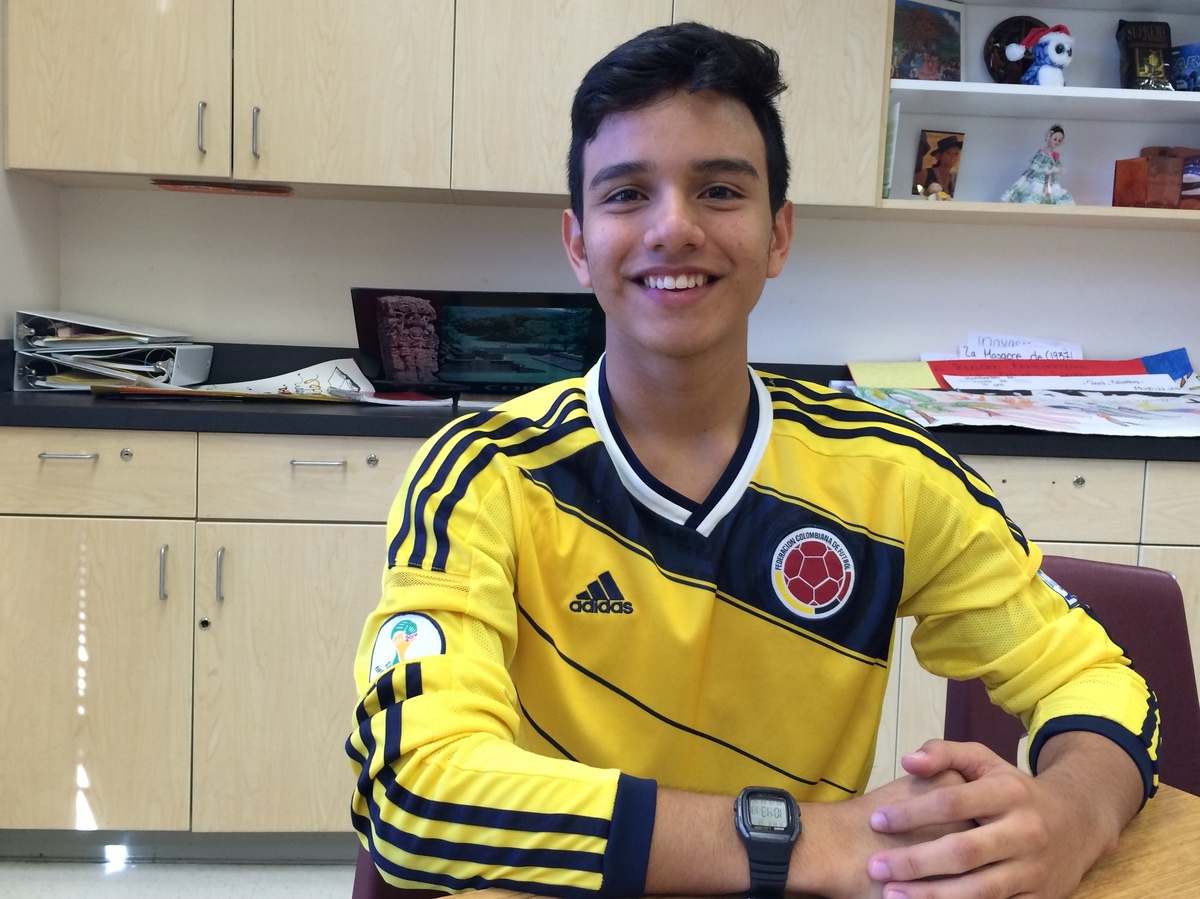 Neil Rios, 17, said college affordability and immigration reform are important issues for him. He signed up to vote and persuaded his mom to register, too.

But Rios said he was initially motivated to vote not because of a certain set of policies, but rather because of his personal identity.

"I'm Hispanic. I'm homosexual. So when I vote, I speak up for my groups," he said.

Rios is now helping other students register to vote.

For him, immigration reform is also important. And, it's particularly personal; his grandfather moved to the country illegally.

"There's so many workers who want to work with my mom," Rios said. "But the only thing that stops them from being hired is they're illegal — they're not documented. And if we hire them, then that puts our business at risk."

Part of the benefit of encouraging high schoolers to vote is that it has the potential to energize an entire family, which is what happened with Rios.

"My mom personally had the opinion that 'Oh, why should I vote, it's stupid, it's not worth my time,'" he said.

But, after he learned about voting in school, Rios said, he convinced his mom.

"She actually listened to me, and she registered to vote, and this is her first time voting ever," he said.

For Rios and other first-time voters in this age group, education, discrimination and immigration are common themes.

Analysts say what's on their mind could be important for years to come because millions of Latinos are under 18, and a vast majority of them are U.S. citizens. In other words, the Hispanic electorate is growing quickly.

"It's seen an additional 800,000 young Hispanics enter adulthood every year, and that's gonna continue to be the case for the next two decades," said Mark Hugo Lopez, director of Hispanic research at the Pew Research Center.

Numerically, Lopez thinks young Latinos have enormous potential to affect elections down the road. However, he also points out that's all it is right now: potential. In the last presidential election, young Latinos had among the lowest voter turnout rates of any group.