Accessibility links
Tarantino Holes Up A Few Outlaws In 'The Hateful Eight' Quentin Tarantino makes a three-hour Western pastiche with help from Samuel L. Jackson, Jennifer Jason Leigh, and a cast of other old and new associates. 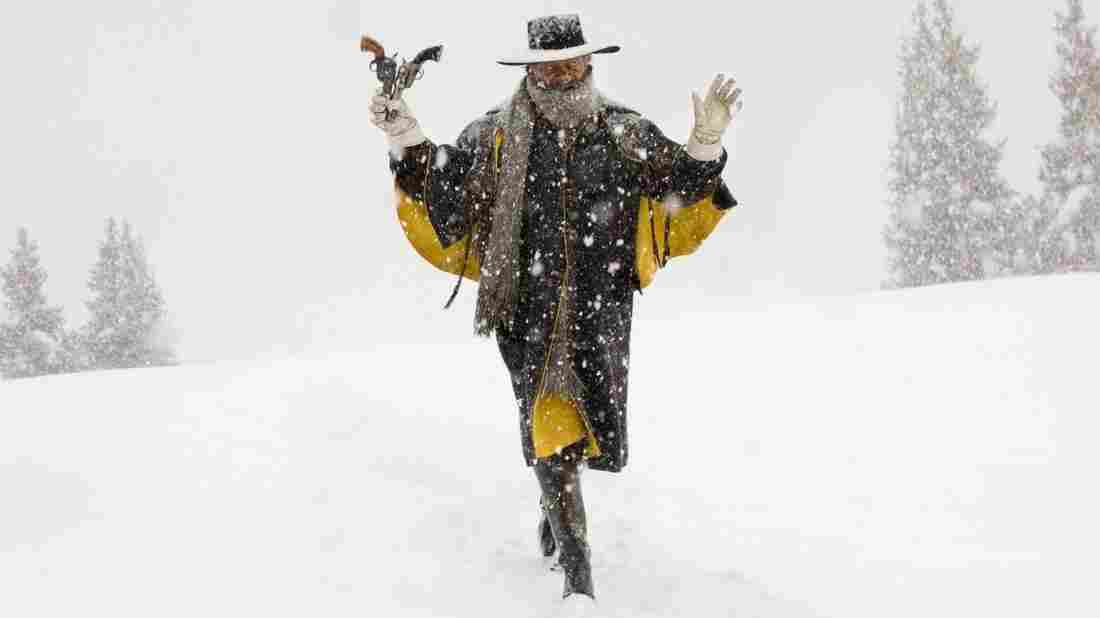 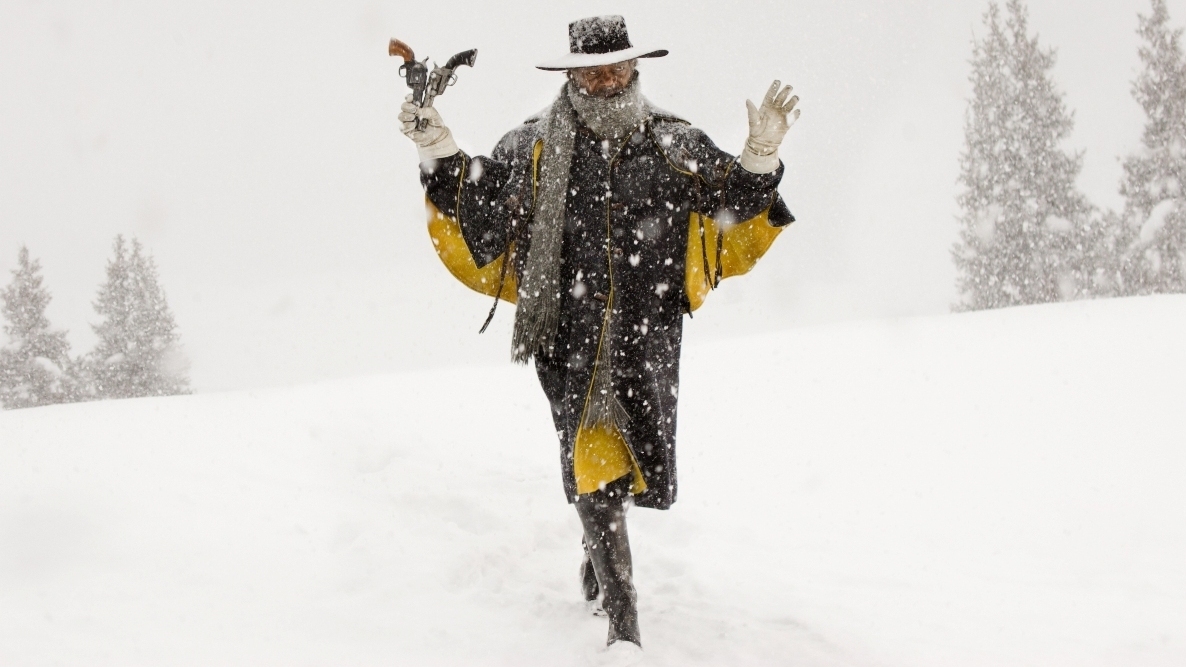 Depending on your perspective, Quentin Tarantino's career either comes full circle or spins its wheels with The Hateful Eight, a three-hour Western pastiche that combines the single-setting theatricality of his first feature, Reservoir Dogs, with the explosive Civil War politics of his last, Django Unchained. As cinema's reigning pastiche artist, Tarantino mixes and matches an array of influences into a remarkably compatible whole, with spaghetti western maestro Ennio Morricone scoring a snowbound chamber piece that evokes John Carpenter's The Thing and Agatha Christie's Ten Little Indians in equal measure. Everyone old is made new again, which is true not only of the referential texture of The Hateful Eight, but of the narrow dimensions of Tarantino's filmic universe, which keeps finding new ways to refresh old themes.

A natural follow-up to Django Unchained, a racially charged revenge tale set two years before the Civil War, The Hateful Eight surveys a collection of outlaws and ne'er-do-wells holed up in a Wyoming cabin in the years after the war, where the same tensions are sublimated rather than dissipated. In fact, the first 100 minutes or so—the length of an average feature—marinate in that tension with only brief, occasional spasms of violence, suggesting the uneasy peace that's settled over the country from the Reconstruction Era to the present. As with the warehouse in Reservoir Dogs, where thieves convene with an informant in their midst, the cabin runs hot with suspicion and dubious Clint Eastwood squints, but Tarantino is content to let it linger for a while. This is America as he understands it, and this isolated outpost is his Ship of Fools.

Tarantino takes his sweet time ramping up, careful to give each character enough room for a proper introduction. In what will amount to a rare exterior scene, the action begins in a stagecoach where John "The Hangman" Ruth (Kurt Russell), a bounty hunter known for keeping his targets alive, is escorting black-eyed fugitive Daisy Domergue (Jennifer Jason Leigh) to the town of Red Rock to face execution. As a blizzard encroaches, the pair make room for two more strangers: Major Marquis Warren (Samuel L. Jackson), a former Union soldier and fellow bounty hunter whose tough reputation precedes him, and Chris Mannix (Walton Goggins), a southerner who claimed to be Red Rock's incoming sheriff.

When the quartet arrive for an extended stay at Minnie's Haberdashery, they encounter another group of men with questionable agendas, including Red Rock's British hangman (Tim Roth), Minnie's Mexican caretaker (Demián Bichir), a snarling black hat (Michael Madsen), and foul former general of the Confederacy (Bruce Dern). The allegiances among these men—and Daisy, perhaps the linchpin of the whole drama—are unclear, but Major Warren's race gives their simmering animosity a focus and he in turn works to leverage an ugly situation to his advantage. Eventually, a trigger is squeezed and the exceedingly bloody reckoning begins in earnest.

Photographed in Super Panavision 70mm—the "roadshow" version of which includes an overture, an intermission, and other such blasts from spectacles past—The Hateful Eight may seem like a willfully perverse candidate for the large format, since the Rocky Mountain expanses can barely be glimpsed through the haberdashery window. It seems likely that timing, as much as vision, inspired Tarantino to commit to an old-fashioned cinematic experience—with his beloved celluloid fading, 70mm is his way of raging against the dying of the Xenon light. But applied to such an intimate setting, the richness and depth of 70mm serve to heighten the tension considerably, as Tarantino keeps adding intrigue between various sets of characters. Samuel L. Jackson presides confidently over this Agatha Christie scenario, but there are potential eruptions all over the frame.

The Hateful Eight veers into dicey territory at times, particularly with Leigh's Domergue, who absorbs the lion's share of the physical and verbal abuse, however skilled she is at snarling insults through bloody rictus grins. Add to that Tarantino's liberal deployment of racial epithets and extravagant violence—Greg Nicotero of The Walking Dead fame gets second billing for his effects—and the viewership for this one narrows to the self-selected. Yet Tarantino can still spin a great yarn (and yarn within yarns), and his cast makes a meal of the dialogue, with favorites like Jackson and Roth returning to old form and newcomers getting a showcase, particularly Goggins, who excels at charismatic hicks, and Leigh, who converts violence into a form of knockabout comedy. The Hateful Eight is a big, shambling, audacious inversion of the Western, held together by Tarantino's sincere conviction that beyond his high juvenilia, American audiences might recognize their own fractious nation.