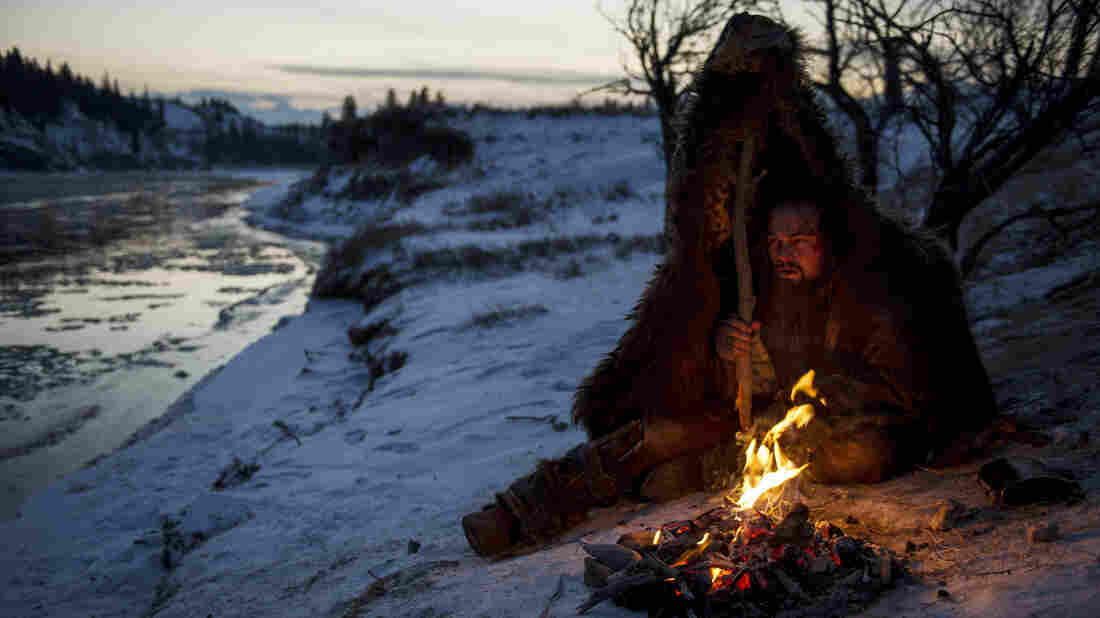 Leonardo DiCaprio, as Hugh Glass, bears the elements in a scene from The Revenant. Kimberley French/Courtesy of Twentieth Century Fox Film hide caption 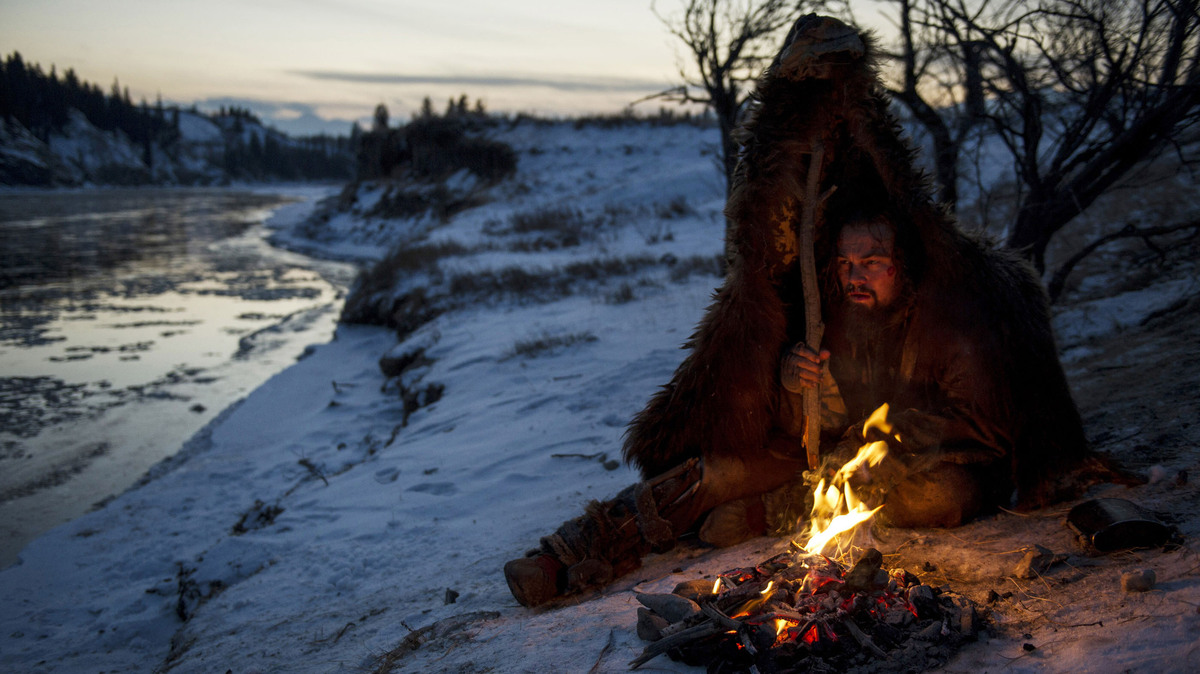 Leonardo DiCaprio, as Hugh Glass, bears the elements in a scene from The Revenant.

An Oscar-winning director, a major star, a survival saga that makes Heart of Darkness look like a pleasure cruise... and all anyone wants to talk about is the bear attack.

And in fact, it's hard not to start there. It comes about comes 24 minutes in. Fur-trapper Hugh Glass, played by a hirsute, bundled-up Leonardo DiCaprio, has helped his fellow trappers escape a harrowing Arikara massacre. In most movies that would be the scene everyone's talking about — arrows piercing vocal cords in mid-cry, death raining down from trees.

But a few men get away, and are hellbent on getting to the comparative safety of a far-off fort before winter hits. Glass, separated from the others, has spotted two bear cubs in the woods. He raises his rifle, then hears a loud snuffling behind him: Mama bear...who has correctly figured out what Glass has in mind for her cubs, charges before he can swing his rifle around. In one horrifying, continuous take, she knocks him down, claws, bites, stomps, and shakes his body, ripping his flesh, breaking his bones.

Only when Glass is motionless after a long, long mauling does she pause in her attack — sizing him up, stepping on his head, sniffing his skin until the call of her cubs distracts her.

And you think it's over.

By the time Glass' son Hawk (Forrest Goodluck) and the other trappers come upon him, Glass is barely clinging to life. Carrying him over rough terrain as winter approaches will doom them all, realizes Captain Andrew Henry (Domhnall Gleeson). He offers a bit of extra pay to two men who will stay to watch over him and then bury him when the time comes.

A young trapper about Hawk's age volunteers to stay, as does John Fitzgerald (Tom Hardy), who's been grousing about Glass and his son (whose mother was Pawnee) since the Indian attack. Alas, Fitzgerald is not someone you want in your corner. Once the others have moved on, he stabs Hawk, all but buries Glass alive, then leaves them to the elements.

At which point a survival/revenge saga begins that's every bit as breathtaking to behold as it is punishing to watch. Filmmaker Alejandro González Iñárritu, fresh off the Oscar-winning Birdman, and working with the same cinematographer who made Birdman's long continuous camera takes so fluid, spent eight winter months in the Canadian and Argentine wilderness with a cast that didn't have to fake being freezing or exhausted. DiCaprio in particular, gets swept over waterfalls, rides his horse off cliffs, drags himself by his fingernails across icy landscapes, and endures Indian attacks, mostly in natural light, ice in his beard, the camera getting so close to him that his breath fogs the lens.

What elevates this standard, if relentless, plot line is that The Revenant feels like high-wire work without a net. Audiences have gotten used to seeing actors doing what look like dangerous things, but in the full knowledge that those actors are not actually in danger...that they're on a soundstage somewhere in front of a green screen.

To shoot The Revenant DiCaprio, aided by the occasional stuntman, actually dragged himself against genuinely frozen ground, and plunged into a raging river with ice in it, and I don't care how advanced the wetsuit is that was hidden under his clothes, that makes a difference you can feel. He's exposed, at the mercy of the elements in a cruelly brutal way, and so is the storytelling.

Yes, there's some digital work here. The filmmakers did not actually turn a grizzly loose on one of the most valuable talents in Hollywood. But the effects are used to make things more real, not more fantastic, and that, also makes a difference.

The dictionary definition of "revenant" is "one who returns after death or a long absence." Applies to the main character obviously. But watching The Revenant, you're aware that a kind of filmmaking — raw and visceral — is returning after a long absence, too.