Accessibility links
Portraits Of Those Killed By Heroin Bring Healing And Awareness Heroin and other opioid overdoses are projected to kill 400 people in New Hampshire this year. Many of them are young. And now one mom is painting portraits of those who overdosed. 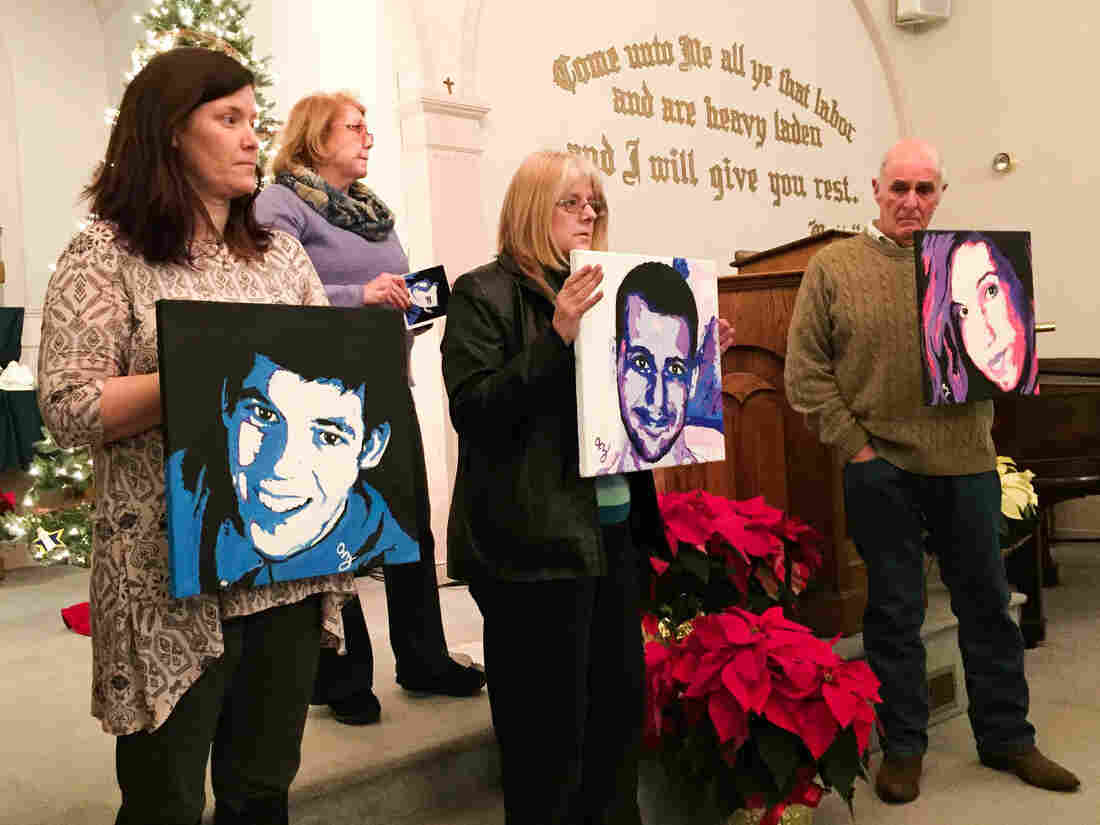 Amanda Jordan, Diane Yelle and Jim Zanfagna hold portraits of their children killed by overdoses at a service for families affected by addiction at the First Baptist Church of Plaistow on Dec. 20, in Plaistow, N.H. Anne Marie Zanfagna stands in the back. Tamara Keith/NPR hide caption 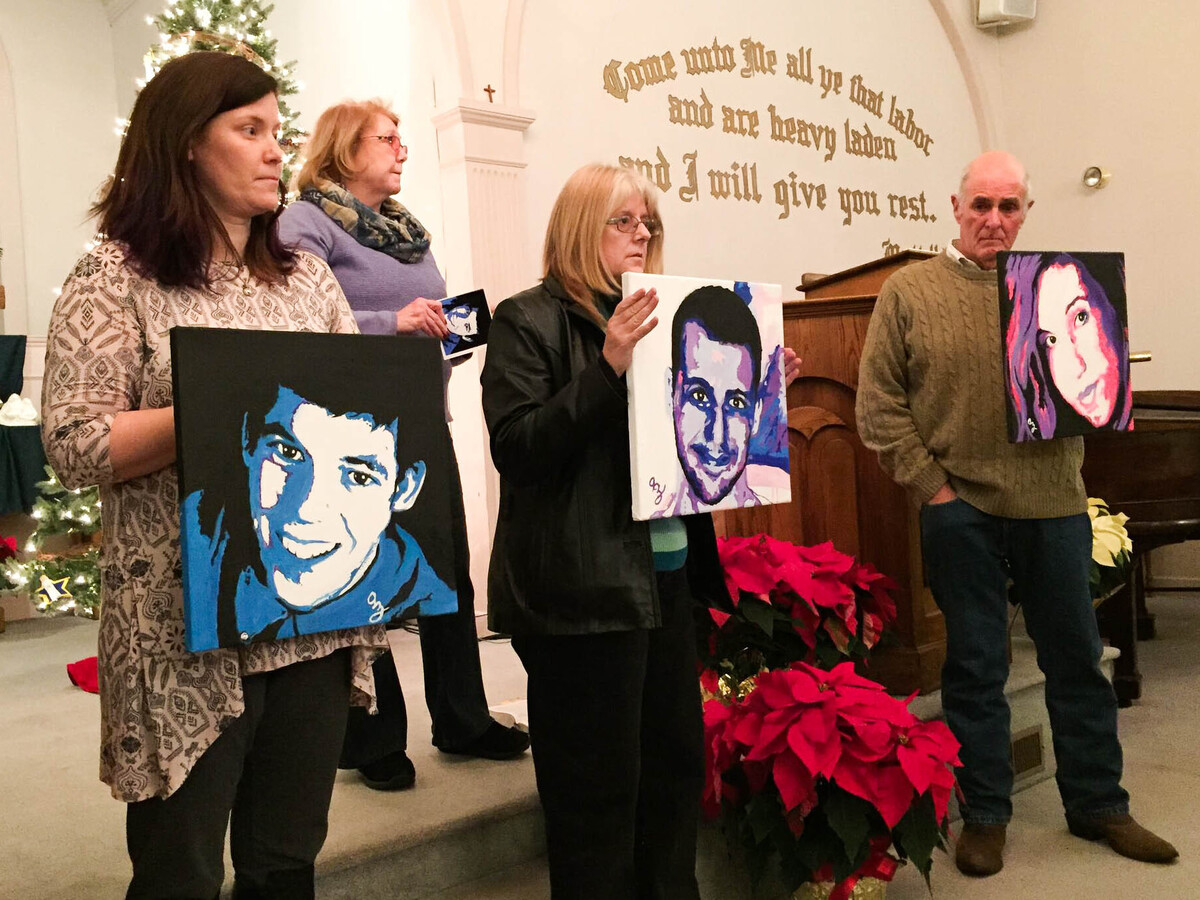 Amanda Jordan, Diane Yelle and Jim Zanfagna hold portraits of their children killed by overdoses at a service for families affected by addiction at the First Baptist Church of Plaistow on Dec. 20, in Plaistow, N.H. Anne Marie Zanfagna stands in the back.

When Jackie Zanfagna died last year at 25 years old, her parents did something bold. In the first sentence of her obituary they acknowledge what killed her: an accidental overdose of heroin.

Now her mom Anne Marie Zanfagna is pouring her grief out onto canvas and in the process helping other parents who have experienced the same loss.

Zanfagna is an artist. But, she says, for six months after her daughter died she was too devastated to pick up a paint brush.

"I didn't want to shower," Zanfagna said. "All kinds of things. You just don't want to do anything. But I figured I have to start doing something. And then I decided that I wanted to paint a picture of Jacqueline."

It is an oil portrait on canvas in bright purple, pink and black. In it, Jackie looks out, a soft smile on her lips. But Anne Marie Zanfagna didn't stop there. Zanfagna has started painting portraits of other young people killed by overdoses.

State health officials in New Hampshire are projecting 400 deaths this year from overdose deaths from heroin and other opioids. That's about one-in-every-3,000 people in this small state and double what it was two years ago. It is a crisis affecting every part of the New Hampshire, people from all backgrounds and financial means.

Because of New Hampshire's first-in-the-nation primary, the crisis has become a front-and-center campaign issue for candidates on both sides of the aisle and came up in the most recent Democratic debate. A recent WMUR Granite State poll found drug abuse ranked at the top of the list of most important issues facing the state.

Once a month, she and her husband, Jim, attend a Sunday-night service at the First Baptist Church of Plaistow.

"Addiction has touched your family in some way or your friends or maybe yourself in some way. That's why you choose to be here tonight," pastor Aaron Goodro said to open up the service on the Sunday before Christmas.

It's a unique gathering for those in this small community who have lost loved ones, or are recovering from addiction. Some weeks, as many as 80 people attend, filling the pews. At a recent service, Goodro called Zanfagna up to the alter. 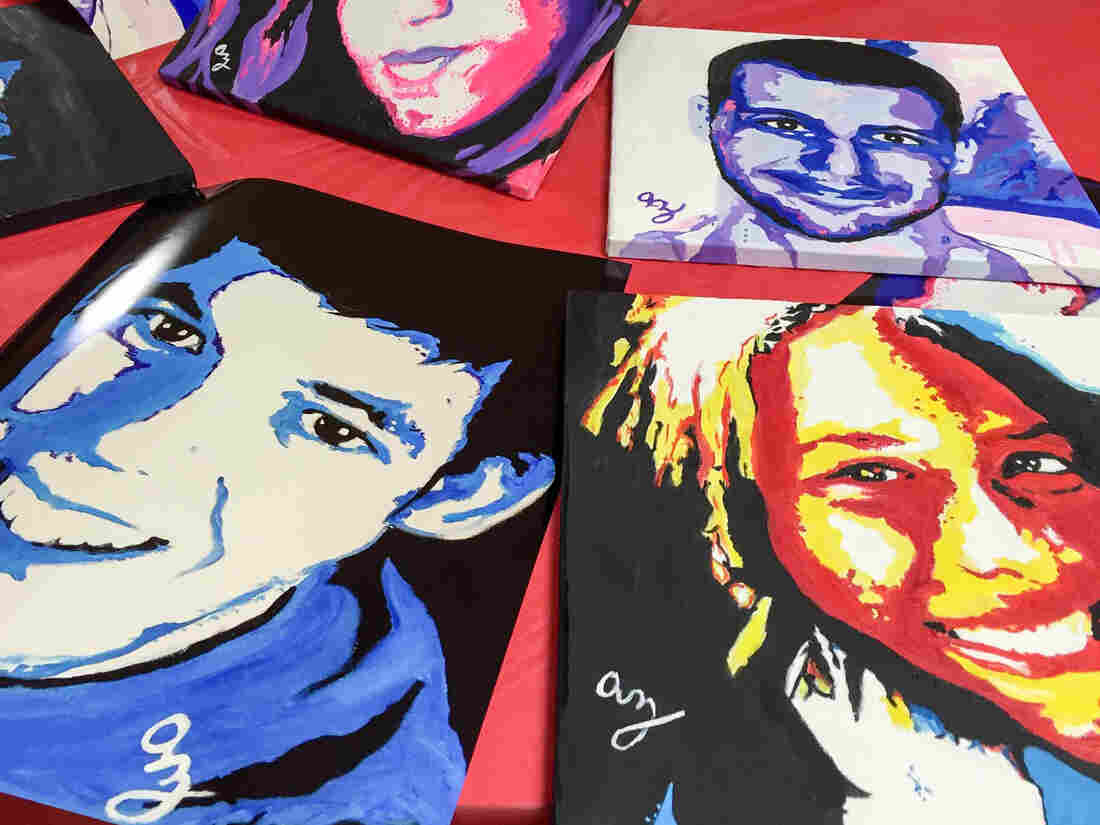 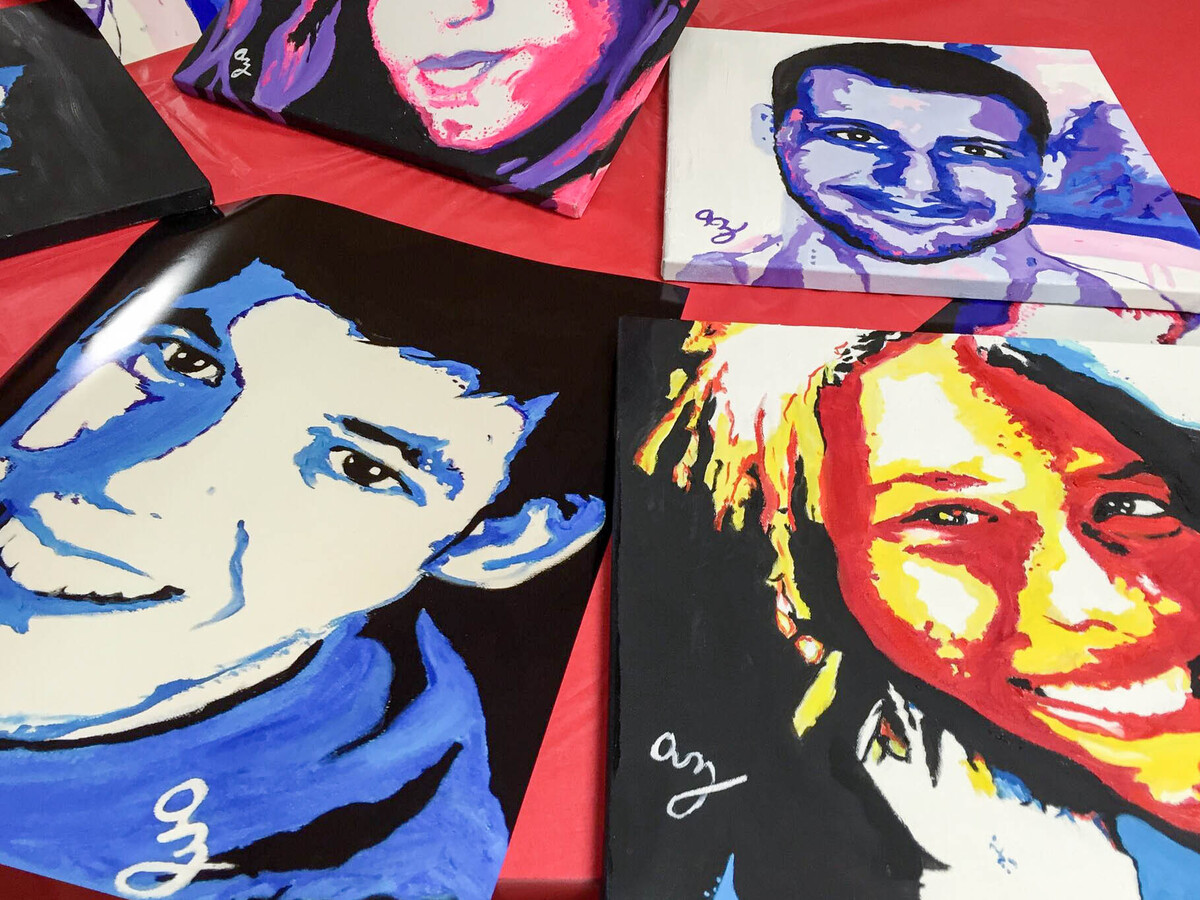 Art work by Anne Marie Zanfagna at the First Baptist Church of Plaistow on Dec. 20, in Plaistow, N.H.

"Anne Marie, our artist friend, would you show us some of your latest work?" Goodro said.

Jim Zanfagna held the picture of Jackie. Then, the pastor called up the parents of other young adults Zanfagna painted. The faces all smile through bold bright colors. After the service, Diane Yelle thanked Zanfagna for painting her son.

"Oh my God, I am in love with this picture," said Yelle at a potluck dinner after the service. "I really appreciate it. You have no idea how much I appreciate it."

"It's very healing for me too," Zanfagna said, "because I know how you feel."

Yelle's son Shawn died of an overdose in September of this year. He was 30.

As she looks at the painting she describes it.

"I feel like he's looking at me," Yelle said. "Those eyes. They kill me, because they're smiling and all we did was laugh together. You know, it's a nice way to remember him."

Another mom struggling to deal with the loss of her son is Amanda Jordan. Her son Christopher died of an overdose in September.

"It just captured him," she said of the portrait. "I mean, she captured the smile, and I just feel like he's alive in that picture. That's Christopher. Not the sad you know, 'I can't do today' or 'I have to have something to get me through today.' That smile is what he always had."

Zanfagna is working on another portrait now and will do as many as she can. She wants to show them in the local public library. But Jordan hopes she aims higher — an exhibit in the New Hampshire statehouse.

"The statehouse would be great," Jordan said. "America needs to know that there's a problem. An absolute huge huge problem."