Accessibility links
Review: Hinds, 'Leave Me Alone' The Spanish garage-pop band's debut is the sound of youthful energy, beginners' confidence and a group settling into exactly what it wanted to be all along. 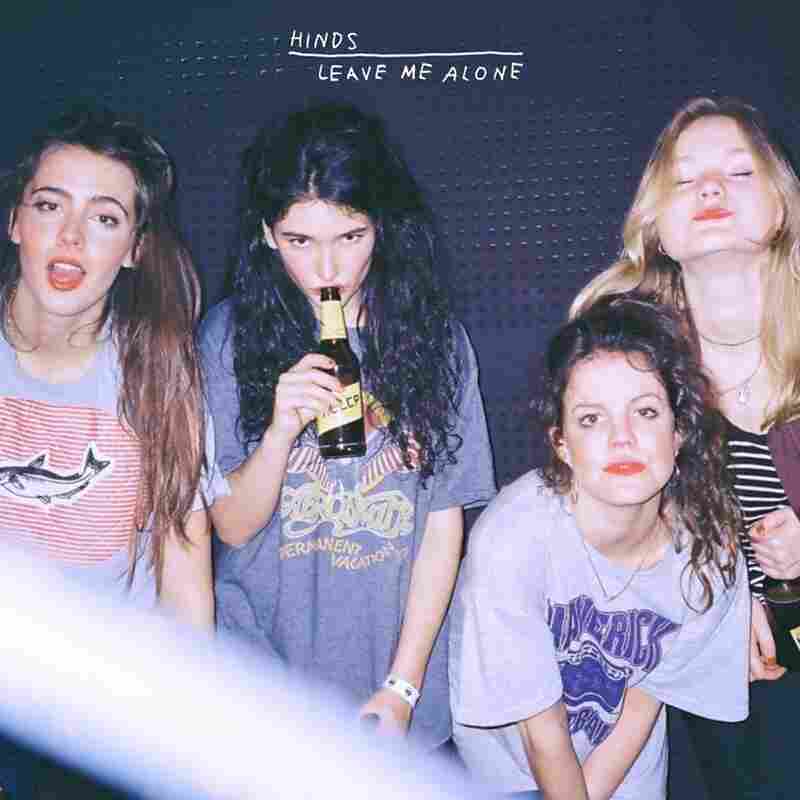 Sometimes the change you don't think you're ready for is exactly the one you need. At the end of 2014, the Spanish quartet Deers had to abandon its name for legal reasons. It wasn't a revision the band wanted to make, but the moniker it chose instead, Hinds (hind being another word for a female red deer), is one that might take the Madrid-based group to garage-pop stardom. Leave Me Alone, Hinds' debut full-length, is the sound of a band settling into exactly what it wanted to be all along.

The name-change isn't the only identity-building Hinds has done since its inception. Ana Perrote and Carlotta Cosials started as a duo, playing a couple of local house shows and releasing two songs in their first year and a half as musicians (documented on 2013's Demo). Somehow, despite a tiny circle of influence, fans and accolades found Perrote and Cosials, who neither buckled under the pressure of overnight recognition nor particularly rose to meet it. Adding bassist Ade Martín and drummer Amber Grimbergen gave the group a rhythm section and an anchored sense of direction that, lo-fi charms and all, Demo mostly lacked — but with which Leave Me Alone relatively seethes. What could have flamed out as little more than a fun experiment between two best friends has instead attracted a wave of attention from the press, from like-minded colleagues (in 2015, they toured with Glass Animals, The Vaccines and Black Lips) and from the world (they claimed to have been the first Spanish band ever to play a main stage at England's famed Glastonbury Festival last summer).

The transitions all speak to Hinds' current trajectory. Even the handwritten note announcing the name-change on the band's website had so much youthful energy behind it that, were the post a living being, it would have been bouncing up and down on its back legs. That exuberance pervades Leave Me Alone, an album with an antisocial title in stark contrast to its infectious, unbridled garage-pop contents. Which is not to say that it is an entirely bubbly collection of songs. "And I Will Send Your Flowers Back" is sad and swoony, like a big empty ballroom bathed in moonlight; and "Bamboo" has perhaps the album's most poignant lyrics, about the reckoning of a broken relationship and being the first to realize the end is near. Hinds has an excellent grip on its particular brand of hazy, jangly music, and uses the razor's edge between mellow and melancholy to maximum effect. They wield their tools with the easy confidence of beginners without sounding like amateurs. At the onset of a new year, with new members, a new name, and a new album — maybe this is what "meant to be" sounds like?