Accessibility links
8 Things Congress Actually Did This Year It is fair to say that the widely held assumption that Congress gets nothing done doesn't exactly fit in 2015. Some big issues, like guns and immigration, were left on the table, though.

8 Things Congress Actually Did This Year

8 Things Congress Actually Did This Year 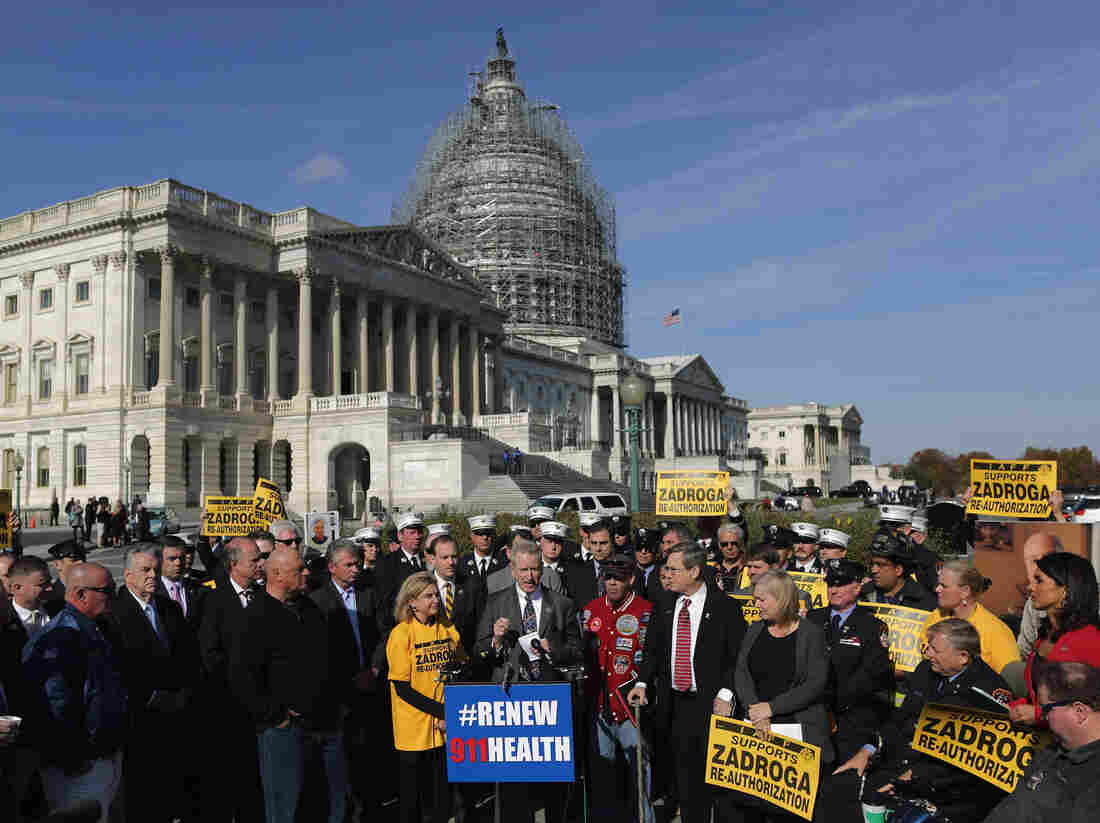 Senate and House Democrats hold a news conference with first responders in November to announce their support for the permanent reauthorization of the James Zadroga 9/11 Health and Compensation Reauthorization Act. Chip Somodevilla/Getty Images hide caption 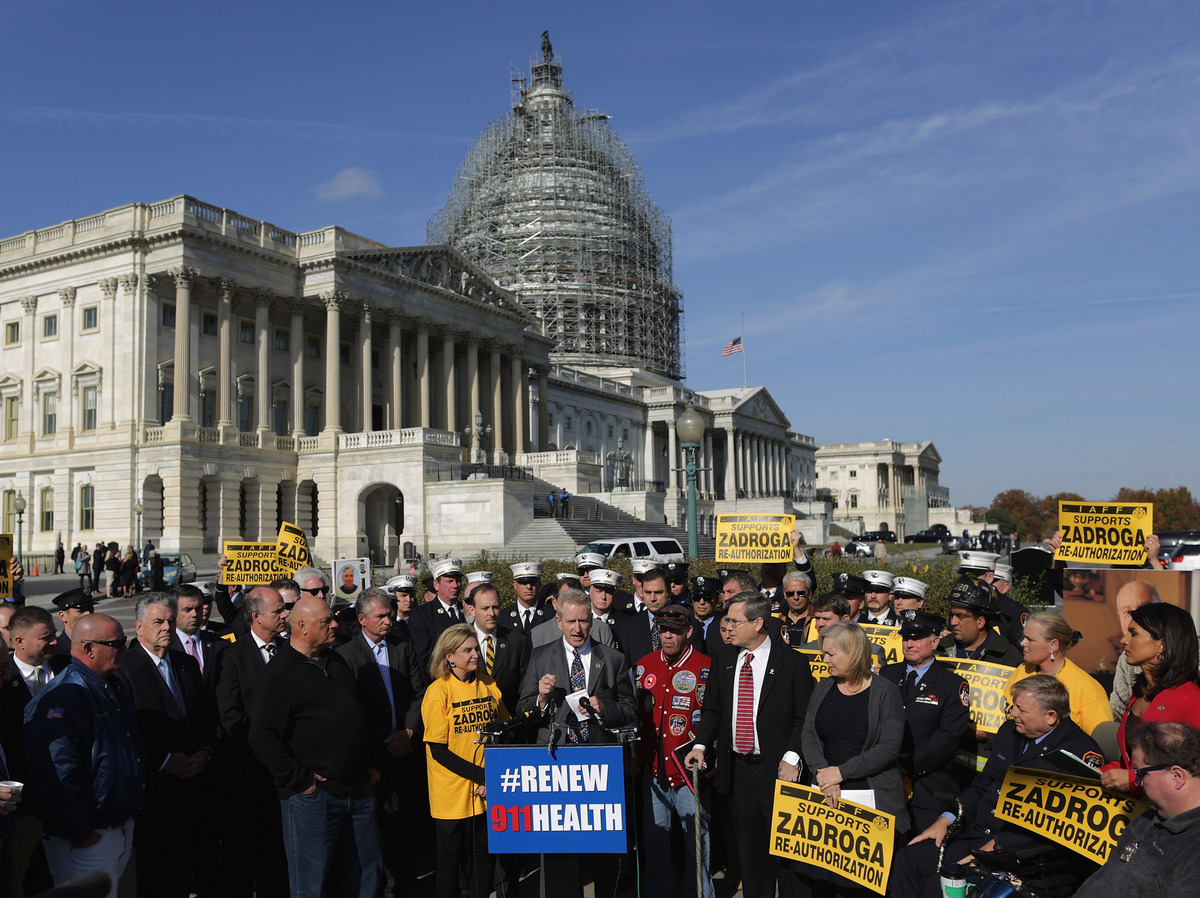 Senate and House Democrats hold a news conference with first responders in November to announce their support for the permanent reauthorization of the James Zadroga 9/11 Health and Compensation Reauthorization Act.

When Republicans took over both chambers of Congress in January, party leaders vowed they would prove to the country that Republicans could govern. They promised to stop with the self-made crises, such as government shutdowns, and rack up legislative accomplishments. So in the first year of a GOP-controlled Congress in nearly a decade, how well did Republicans prove they can govern?

But Democrats aren't exactly congratulating them for it. "That's like saying, 'You know, they didn't blow the top off the Capitol, so clearly Republican leadership is in touch with America.' No, it takes more than that," said Democratic Sen. Dick Durbin of Illinois.

Nonetheless, it is fair to say that the widely held assumption Congress gets nothing done doesn't exactly fit this year. There was an uptick in bipartisan activity in this Republican-controlled Congress in 2015, but if you ask Democrats why that was, they'll say it's because they were a more cooperative minority than Republicans were when Democrats controlled the Senate — and that they cooperated on legislation that bolstered Democratic goals.

Whether or not keeping the government open counts as an accomplishment, here are eight legislative matters Congress did address in 2015 — and some issues that remain unresolved:

Trillion-Dollar Government Funding Bill: Right before they split for the holidays, lawmakers passed a trillion-dollar spending bill that will keep the government open until the end of next September. The measure also beefed up cybersecurity and renewed a health care program for Sept. 11 first responders. It also made changes to the visa waiver program so people who have traveled to Iraq, Iran, Syria and Sudan in the past five years will face greater scrutiny if they wish to enter the U.S.

Tax Extenders: Paired with the government spending bill was a measure containing hundreds of billions of dollars in tax breaks. Year after year, Congress has had to extend dozens of tax breaks that expire. In this measure, lawmakers made permanent the most popular tax breaks, such as the $1,000 child tax credit, the earned income tax credit for low- and moderate-income workers, and the research and development tax credit.

Two-Year Budget Agreement: Right before Boehner left office, he managed to reach a two-year budget deal with the White House and other congressional leaders. The agreement suspends the debt ceiling through March 2017 and increases spending by $80 billion over the next two years — an increase that's split evenly between defense and domestic programs.

No Child Left Behind Rewrite: Congress easily passed legislation to rewrite the 2002 No Child Left Behind Act. Federally mandated math and reading tests will continue, but the new law cedes greater authority to states, rather than the federal government, to figure out how to use the test results in evaluating schools.

Five-Year Transportation Bill: Congress passed its first long-term bill in a decade to fund roads, bridges and mass transit systems. The measure does not raise the gas tax, currently at 18.4 cents per gallon, but found other sources of funding — such as changing customs fees and dipping into funds from the Federal Reserve.

Trade Promotion Authority: Congress approved a measure to give the president expedited authority to enter a trade deal with 11 other Pacific Rim countries. Attention now turns to the Trans-Pacific Partnership agreement, which Congress is expected to consider next year — possibly after the election is over.

Medicare Reform: Known as the "Doc Fix" bill, this measure permanently ended automatic Medicare payment cuts to physicians. Under a law from the late 1990s, Medicare payments to doctors would be cut to keep the program's budget in check. Since then, Congress had failed every year to figure out a long-term solution to the problem.

Still, so many issues remain unresolved — not because lawmakers think they're unimportant but because partisan divisions on these ideological issues are so deep, they can't find common ground. Congress seems happy to take these issues to the voters in 2016.

Guns: After a spate of gun-related tragedies in 2015, Democrats vowed to push for gun control legislation, such as measures to expand background checks and prohibit individuals whose names are on terrorist watch lists from purchasing firearms. Both measures failed in the Senate in 2015, as in past years.

Immigration: The Senate managed to pass a comprehensive immigration overhaul package in 2013, but attempts to move the legislation through the House failed. Efforts to resurrect immigration legislation have since languished.

Tax Reform: After the midterm election, corporate tax reform was seen as a possible area Republicans and Democrats could work together on. But at his year-end news conference, McConnell expressed pessimism about getting any tax reform accomplished with a Democrat in the White House, saying that any tax changes need to be revenue-neutral and he doubted the president would go for that.