Accessibility links
'Shame And Wonder' Is Light On Shame, Heavy On Wonder David Searcy's essay collection finds the marvelous in everything from classic cars to Scrooge McDuck. Though it lacks some leavening humor, it's a lovely argument for approaching the world with awe.

'Shame And Wonder' Is Light On Shame, Heavy On Wonder

'Shame And Wonder' Is Light On Shame, Heavy On Wonder 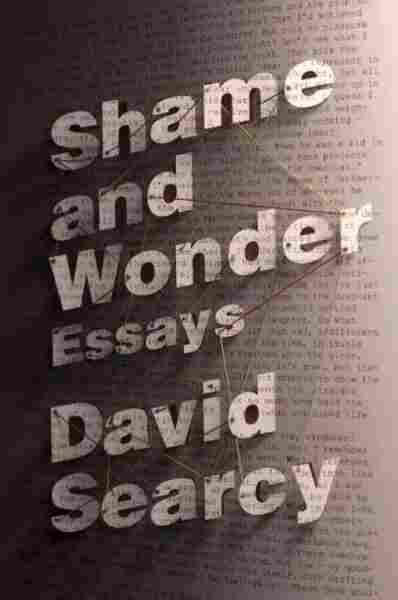 Shame and Wonder is a series of wandering essays on cartoons, comic books, model rockets and other passions of a midcentury boyhood, as well as meditations on travel and friends and whatever else drifts into its slow and dreamy orbit. And everywhere, David Searcy finds the strange and marvelous in careful examination of the quotidian.

His essays are often aimless, but with refrains and echoes: Searcy hunts for odd resonances and likes to get caught on the familiar corners of the world, turning them suddenly strange so you step back and see the ordinary world for the odd and lonely and magnificent thing it is.

In my favorite essay, a sweet, funny and slightly mournful meditation on Scrooge McDuck, Searcy finds a cyclical inescapability in the structure of cartoons and comics: cartoon characters try, strain, travel, but at the beginning of the next episode, they are always back where they started, neither sadder nor wiser. Nothing has ever changed: "Hopes and fears will cancel out and they'll return to life between the quarterly issues — Donald Duck to a house like ours and Scrooge to the money bin, the sweet ennui, the old dissatisfaction." New life is impossible.

He's just as good on custom cars, normal cars transformed through years of labor into magnificent machines: "The idea, I think, was more or less that paradise is possible ... The marvelous implicit in the everyday. How striking and encouraging to discover that a '51 Ford pickup or whatever had a soul. Who would have thought? So, get behind the wheel of that and where do you go? Can you imagine?"

But for every thought that emerges slow and lovely like a sunrise from an ordinary view, there's a clunker. The issue, I think, is that Searcy's writing, though searching and gorgeous and meditative and all that, lacks a sense of play and self-awareness. A slightly beery smell, middle-aged and macho, comes from some of these pieces: I got tired of the habitual horizon-staring and gun-fingering, and wished for a little bit more introspection.

For instance (and this is going to sound petty), I couldn't forgive a stance Searcy adopts early on in an essay about the killing of a coyote. The backbone of the essay is a story he hears from a dental hygienist, who tells him about a trap her father set for a coyote that was killing off his sheep.

The essay opens, "I'm in the dental hygienist's chair and she's a new one, although very much the same bright, cheery presence as the last, which works for me. The unencumbered heart is best, I think, in matters such as these." She tells him to floss. "I hate to floss. It seems sort of prissy — like a manicure or something." It's a minor snottiness and doesn't really have anything to do with the essay, but it embodies a broader posture: In an essay about hunting, the cheery dental hygienist and her very reasonable thoughts on flossing are implicitly contrasted with unprissy, uncheery things like guns and outsmarting coyotes and looking manfully into the distance, as much of the essay is spent doing.

Gripes aside, this book is a lovely implicit argument for a particular orientation toward the world: continuous awe and wonder.

The dangers of gum disease aside, it's slightly derisive (can we presume her heart is unencumbered?) and contributes to the broader taste of self-seriousness and ungenerosity that keeps the book from being purely good company.

Even a touch of humor would help. In an essay about the prizes found at the bottom of cereal boxes, Searcy tries to convey the awe and excitement he felt as a child digging through the cereal for the prizes: "Not the ones you had to send away for ... I mean the ones you'd find in the cereal box itself as if by accident ... That something-out-of-nothing sort of power and unlikeliness — to which a child, so recently produced out of that powerful unlikeliness, would be especially sensitive." For Searcy, the imbuing of meaning is so habitual that it sometimes approaches parody. No child thinks, finding a piece of plastic in his Lucky Charms, "I too was born miraculously, from inexplicable origins!"

But, gripes aside, this book is a lovely implicit argument for a particular orientation toward the world: continuous awe and wonder (the titular Shame never makes much of an appearance). Searcy advocates the magnificence of the ordinary, and the effect of his writing is like seeing how ordinary objects, put under a microscope, become otherwordly and strange — or normal words, repeated over and over again, become suddenly alien.

The world should be wondered at, the trees, the people, the strange instruments we devise for our survival and pleasure, are all spectacular if looked at too long, too closely. The pavement is as strange as the stars.