Accessibility links
As 2016 Elections Loom, So Does A Possible End To DACA The next president could end Obama's executive action on immigration — and many GOP candidates have vowed to do it. For almost 700,000 immigrants in the U.S. illegally, the clock may be ticking. 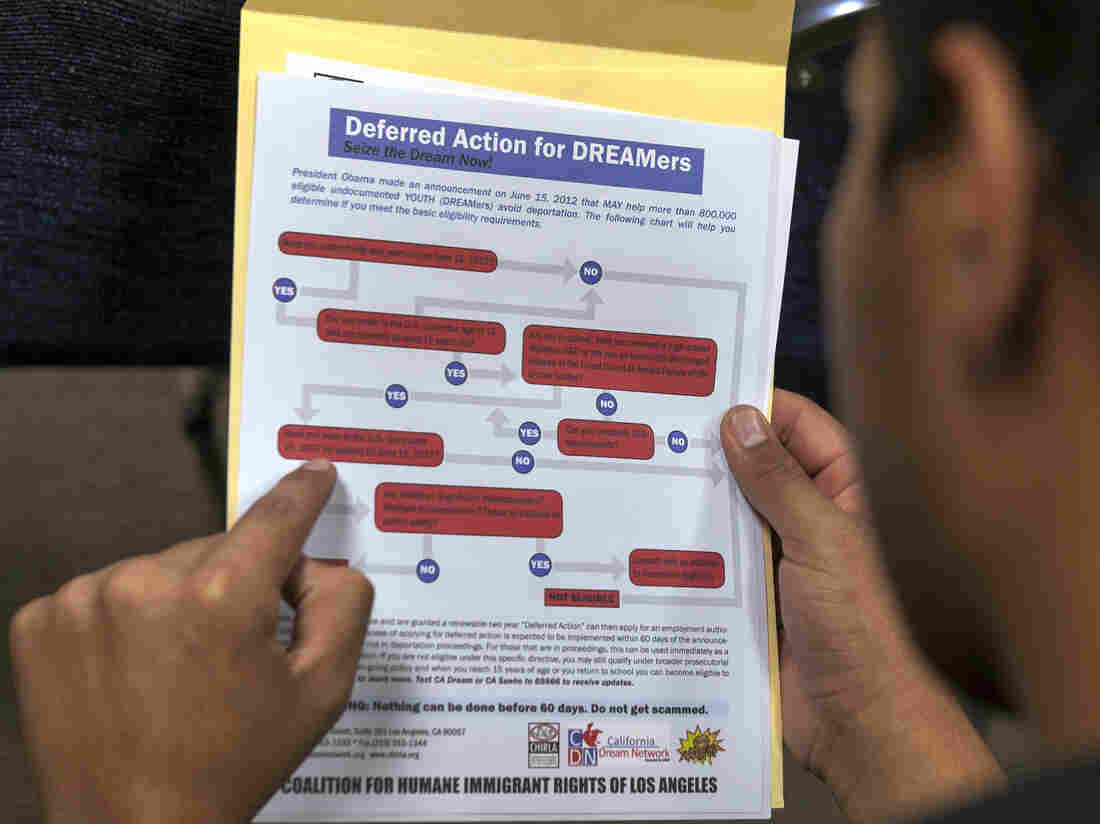 A 2012 guide shows who's eligible for Deferred Action for Childhood Arrivals, or DACA. The original program, implemented by President Obama in 2012, has come under fire from many Republican presidential candidates — many of whom have promised to end it if elected to the White House. Damian Dovarganes/AP hide caption 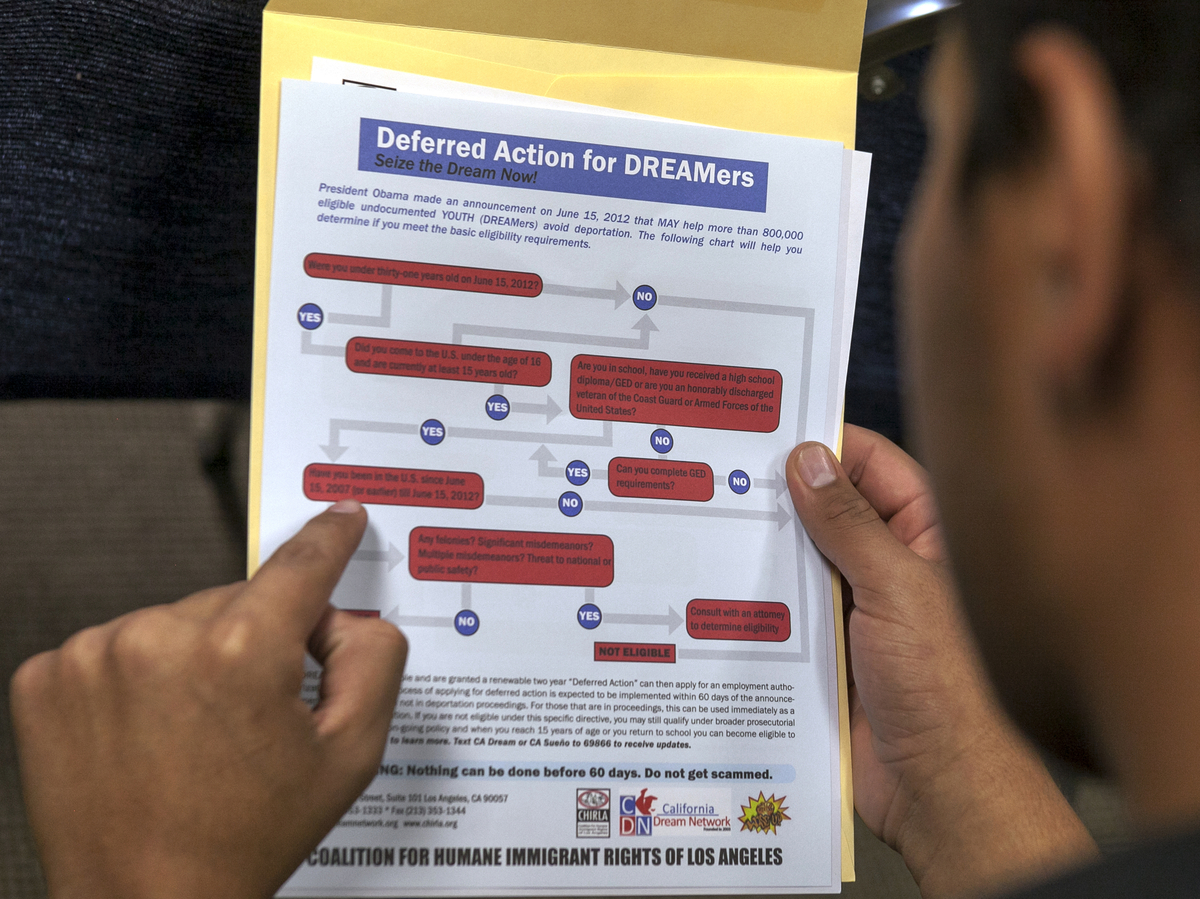 A 2012 guide shows who's eligible for Deferred Action for Childhood Arrivals, or DACA. The original program, implemented by President Obama in 2012, has come under fire from many Republican presidential candidates — many of whom have promised to end it if elected to the White House.

Back in 2012, President Obama took executive action to create a program for unauthorized immigrants who entered the U.S. as children before June of 2007, and who are currently younger than 34.

That program has come to be known as DACA — Deferred Action for Childhood Arrivals — and since it was instituted, it has temporarily protected almost 700,000 people from deportation.

How long the original DACA program lasts, though, will depend on who wins the 2016 presidential race. (There's also a lawsuit against an expansion Obama planned to make to the DACA program that has been appealed to the U.S. Supreme Court.)

By now, almost all of the Republicans running to replace Obama have been asked how they would handle the program as the next president. And just about all of them — including Gov. Chris Christie, Donald Trump and Sen. Marco Rubio — have said they would get rid of DACA.

That's a scenario that immigrants like Valentina Garcia, a sophomore at Dartmouth College, are preparing for.

Garcia was 6 years old when she and her family left Uruguay by plane on tourist visas. After those expired, they stayed in the U.S. In 2014, Garcia received DACA — and with it, a Social Security number. A Georgia resident, she was also able to apply for a driver's license.

Roberto Gonzales, a sociologist at Harvard University, has studied the lives of young immigrants without legal status. And according to his studies, Garcia is by no means the only one who has taken on more responsibility in the family since DACA.

"They're playing greater roles within their family, within their community. And so an elimination of DACA would have ripple effects that extend far beyond these individuals," Gonzales says. He notes that the temporary work permits they receive through DACA have allowed many to stop working under the table.

"These young people have taken giant steps towards the American Dream," he adds. "They now have new jobs. They're getting healthcare. They're building credit."

But they're not on the path to citizenship — and their long-term future in the U.S. is still a big question mark. The Obama administration has put DACA recipients at the bottom of its priority list for deportation, but Victor Nieblas of the American Immigration Lawyers Association says that could change under a new administration.

In Pursuit of Recognition: An Undocumented Immigrant's Resilient Fight

"We have to be honest here," Nieblas says, "and we have to indicate that it really all depends on who wins the presidency and the immigration policies of this new president" — policies that could directly impact Jin Park, a 19-year-old Harvard student who was one of the first to receive DACA in 2012.

"Somebody can drag me out of my chemistry class at 10 a.m. and deport me," Park says. "That is a real possibility, and it's scary, you know."

Born in South Korea, Park was 7 when he took a plane to the U.S. with his parents. Like Garcia, Park and his family overstayed their tourist visas. Now, he says he's paying close attention to the presidential race — "All the debates, all the Republican debates, I really try to watch."

"For me, surviving as a single mother with a child — you know, a 3-year-old — I definitely have to start thinking about savings," says Antonia Rivera of Des Moines, Iowa, a 33-year-old mother who is also preparing for the possible end to DACA.

She walked across the border from Mexico illegally with her mother and younger sister when she was 6.

"I'm a survivor," Rivera says. "I know how to survive without any source of legal document that allows me to work and drive legally in this country. But I know it's really, really hard to do."

It's a challenge that more than a half-million DACA recipients may have to face when Obama leaves the White House.