Accessibility links
400 Years After His Death, Shakespeare's First Folio Goes Out On Tour The First Folio is the first printed collection of all of Shakespeare's plays, assembled by two of his buddies after he died. Without it, plays like Macbeth and Twelfth Night might not have survived. 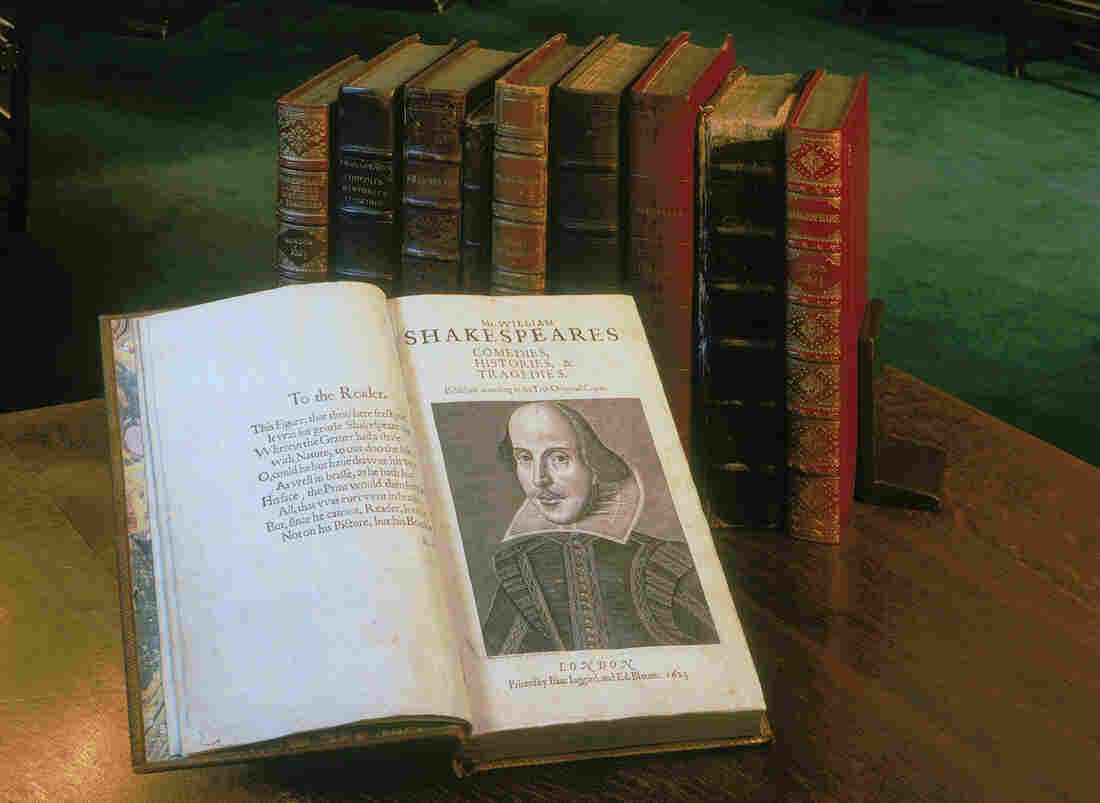 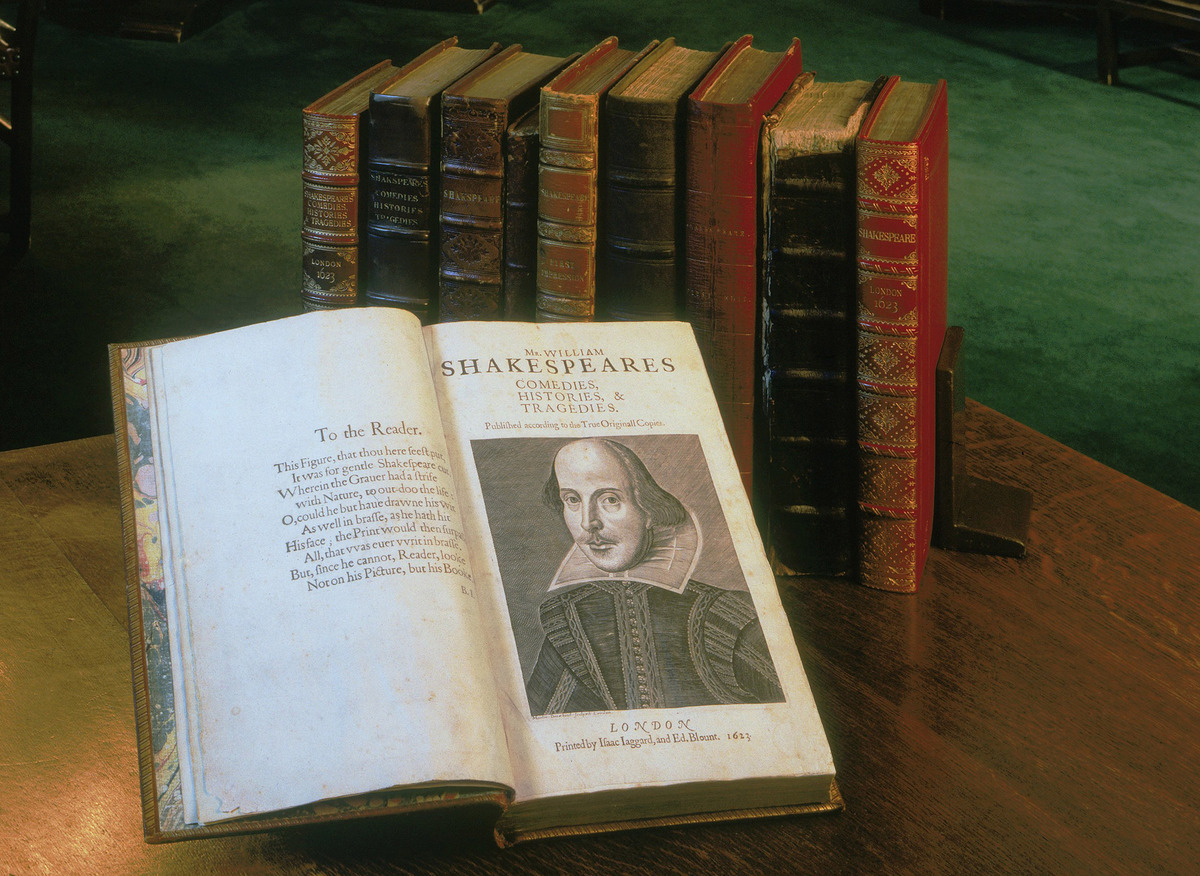 To mark the 400th anniversary of William Shakespeare's death, the Folger Shakespeare Library is sending the first printed collection of all his plays out on tour.

One of the world's most precious volumes starts a tour on Monday, in Norman, Okla. The Folger Shakespeare Library in Washington, D.C., is sending out William Shakespeare's First Folio to all 50 states to mark the 400th anniversary of the bard's death. Published seven years after he died, the First Folio is the first printed collection of all of Shakespeare's plays.

The Folger has 82 First Folios — the largest collection in the world. It's located several stairways down, in a rare manuscript vault. To reach them, you first have to get through a fire door ... (if a fire did threaten these priceless objects, it would be extinguished not with water — never water near priceless paper — but with a system that removes oxygen from the room).

A massive safe door comes next — so heavy it takes two burly guards to open it, and then yet another door, which triggers a bell to alert librarians that someone has entered. After that, there's yet another door and an elevator waaaay down to a vault that nearly spans the length of a city block, says Folger director Michael Witmore.

This is where the library stores tens of thousands of pieces of paper — folios, plus half of everything printed in England from 1473 to 1660 and much more. And there, propped open on spongy wedges to protect the binding, is the First Folio.

"If you had to pick one book to represent Shakespeare, this is it," Witmore says.

Two of Shakespeare's pals put it together in 1623, after he died. John Heminges and Henry Condell were fellow actors who felt the plays should be collected in a single large volume.

They also added in 18 of Shakespeare's plays that had never appeared in print, explains Witmore. "Without this book we probably wouldn't have ... Twelfth Night, Julius Caesar, Macbeth, The Winter's Tale ..." 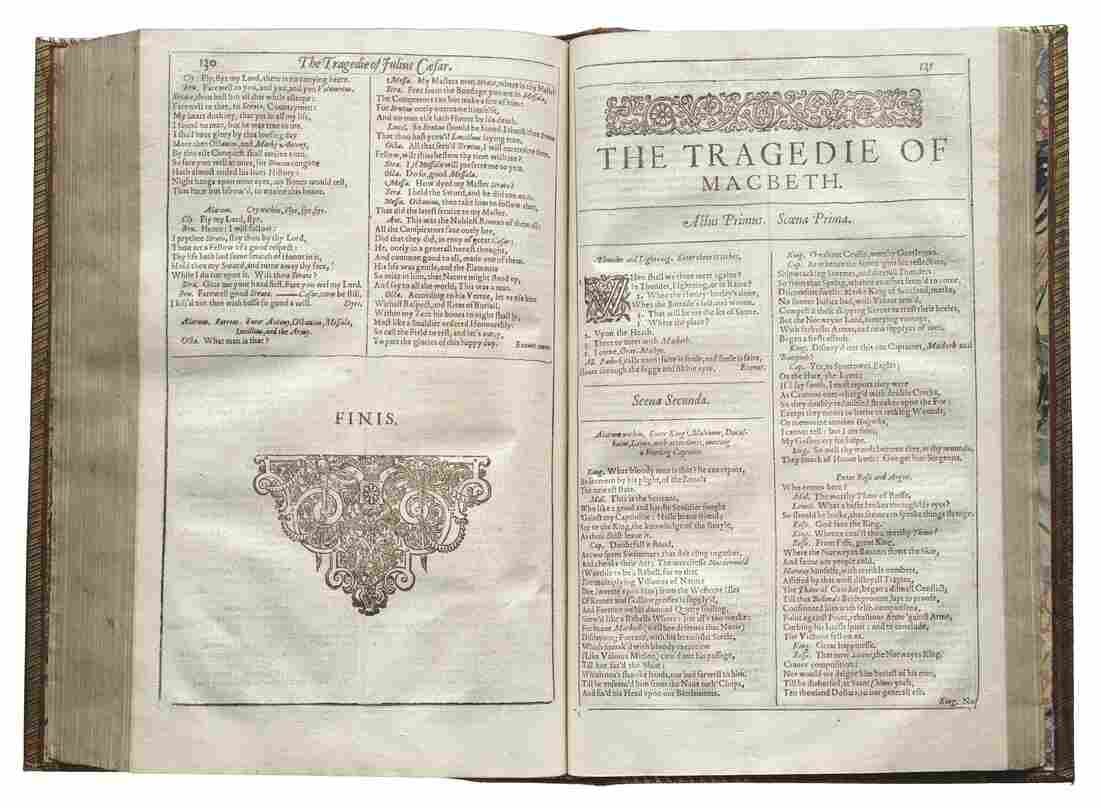 Macbeth is one of the 18 previously unprinted plays that appeared in the First Folio. Folger Shakespeare Library hide caption 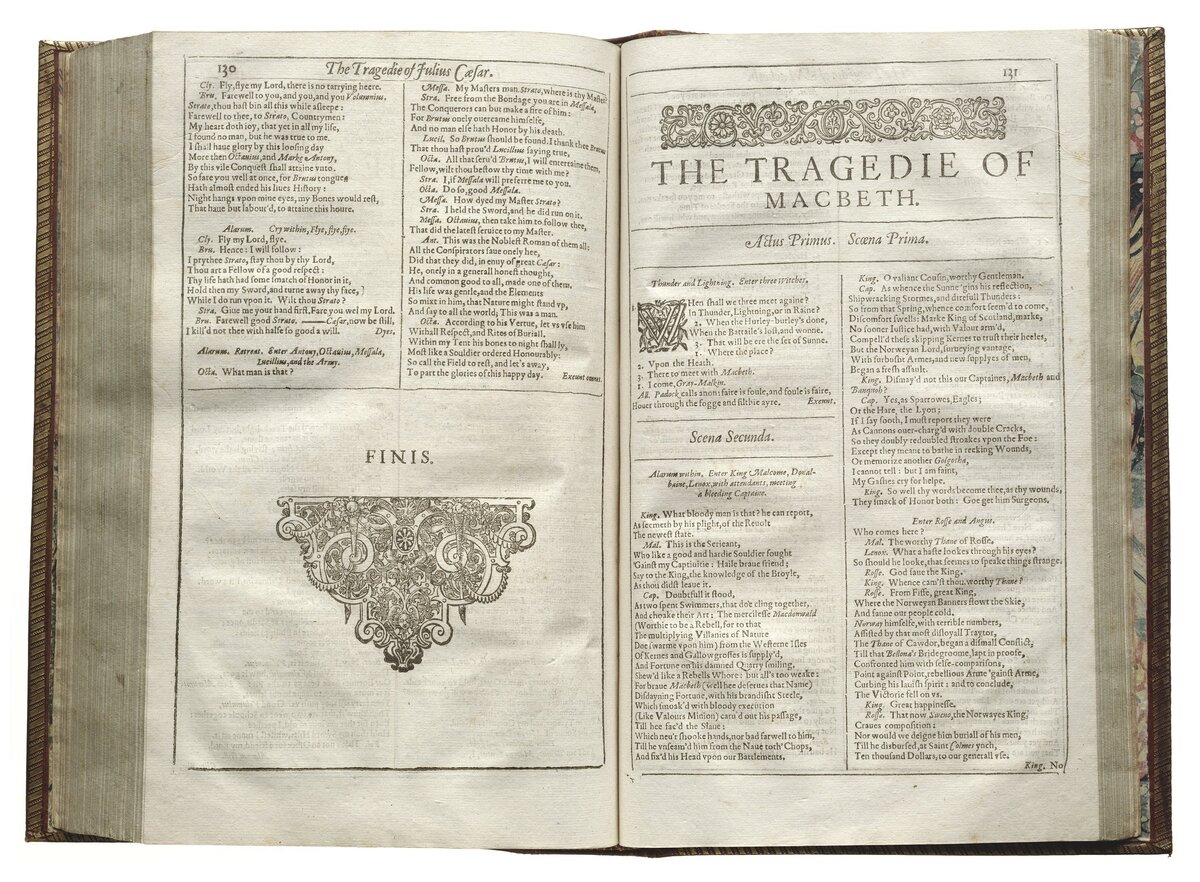 Macbeth is one of the 18 previously unprinted plays that appeared in the First Folio.

It adds up to a total of 36 plays in the Folio. The others had been printed, as individual works in smaller format (quarto — single pages folded in four, and bound). Some of those were published in Shakespeare's lifetime.

Shakespeare didn't spend much of his time coordinating or supervising the printing of his work. He really just wanted to write. He wrote on vellum, with a goose quill pen he cut himself, and ink he may have made.

There was a ready audience for Shakespeare's work, which was sold in bookseller shops and stalls in London. For 20 shillings ($200 in today's money) you could buy loose sheets of paper and take them to your binder, who put them between hard covers. Of the approximately 750 copies of the First Folio that were printed, 233 survive. The book was so popular that more editions were printed and eventually there were four folios. Each time it was printed, someone made changes in the text — which has kept centuries of Shakespeare scholars busy!

To scholars and actors, this 4 pound, 13 ounce volume is the paper equivalent of The Holy Grail.

From Bedazzle To Watchdog

... read about everyday words and phrases commonly attributed to the Bard:

That is exactly why those two Shakespeare friends, the folio-makers, wanted the plays preserved.

Thomas Keegan, another graduate of the Shakespeare Theatre Academy, says if the folios hadn't been made all those centuries ago, he probably wouldn't have the opportunity to read and perform these works today.

Eighteen of the Folger Shakespeare Library's First Folios will be touring the country — six at a time for a year — to mark the 400th anniversary of the master's death.