Accessibility links
A 'Heartbreaking' Story: How An Editor And A Crime Victim Crossed Paths When Adam Marton, an editor for The Baltimore Sun, was making an infographic of the city's 2015 homicides, he realized he knew one of the victims. He tells Renee Montagne about the connection.

When Adam Marton, an editor for The Baltimore Sun, was making an infographic of the city's 2015 homicides, he realized he knew one of the victims. He tells Renee Montagne about the connection. 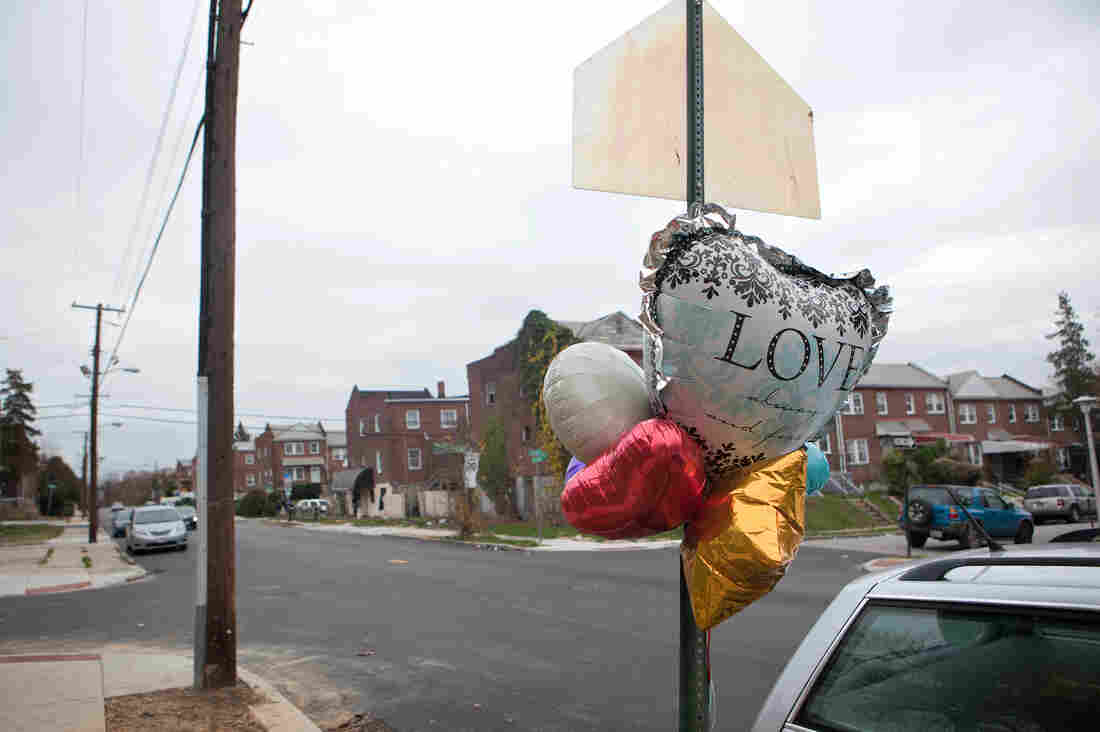 A memorial is seen on West Baltimore street at the site of the city's 300th homicide on Nov. 19, 2015. Jun Tsuboike/NPR hide caption 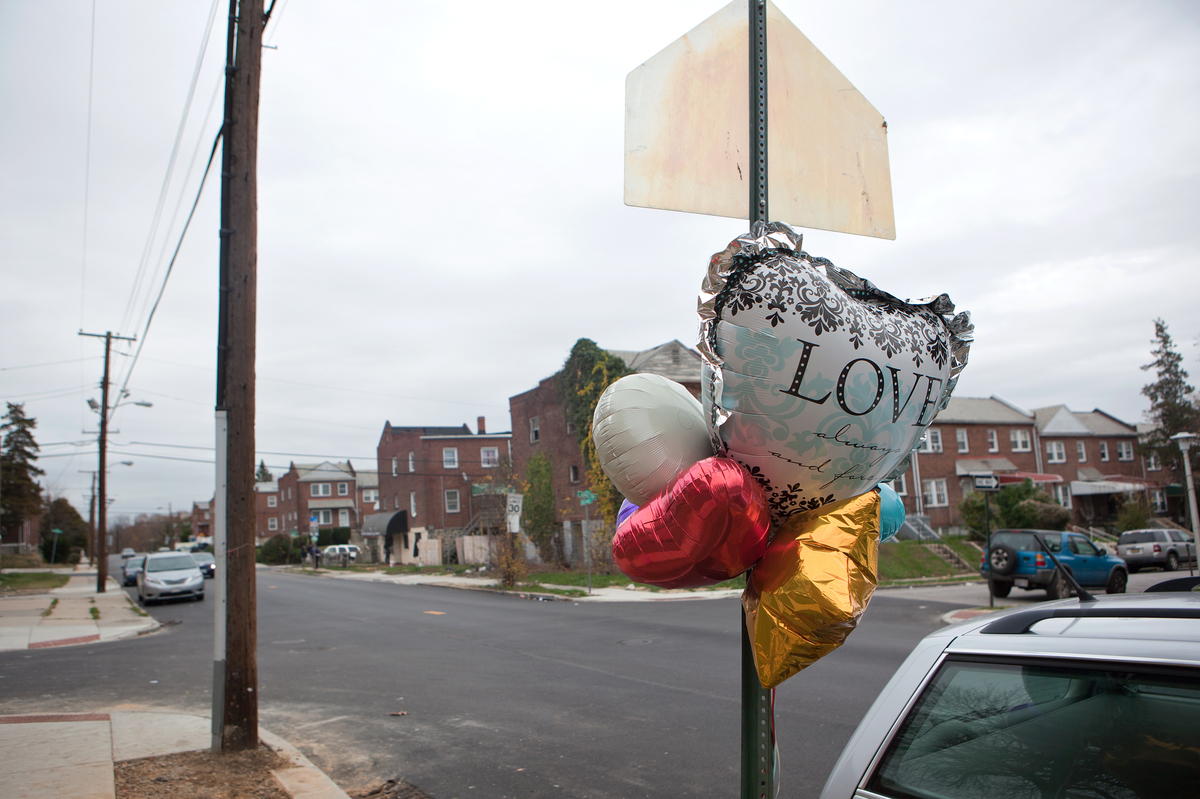 Young black men are being murdered every day in Baltimore. Last year, that city suffered a record 344 homicide, almost all of them black men shot to death.

And for its end-of-year New Year's Day edition, the Baltimore Sun wanted to bring that number home with an infographic boldly showing who the victims were.

MONTAGNE: Editor Adam Marton was working on the design when he came across a name of one victim - Thelonious Monk. The unusual name, shared with the famous jazz musician, sparked a painful memory and prompted Adam Marton to write about it on his Facebook page. It was about a decade ago that this Thelonious Monk had stolen Marton's car.

ADAM MARTON: I had dropped it off one evening and someone had fished the key out of a night drop at the auto body shop. My wife and I were supposed to go on vacation. Of course, we were worried at the time about the car and the insurance. We ended up getting a loaner car from the insurance and going on our vacation anyway. Then a few weeks later, I received a call letting me know that my car was - had been found, and it was at the Baltimore City impound lot, and I should go pick it up.

MONTAGNE: And why don't you pick up reading what you wrote about that?

(Reading) When I got my car back a few weeks later, Thelonious had installed a baby seat and a subwoofer, and the car was strewn with job applications. It was, and remains, one of the most heartbreaking scenes of my life. Our lives crossed, however oddly and briefly, and I can't help but think that Thelonious never had a chance - a chance to escape, a chance to succeed. I feel like maybe he was trying to use my car to make a break for it. I wish he had made it. Rest in peace, young man. I will never forget you.

MONTAGNE: After you saw that baby seat, and that he'd kind of made a world in your car, and he was apparently looking for jobs, did you think about him?

MARTON: I did a lot. I'm a journalist, and I'm really interested in stories and people and their relationships in the world. And I'm always trying to understand. And what I saw in the car told me a story about this man's life. It seemed at the time, and still seems today, that he took this car, but he was kind of trying to make it his own car, right - I have this car now, now I can have a new life. I can go get a job and drive my baby around. I can listen to music. You know, I expected to see a crime scene, and what I saw instead was inside somebody's life.

MONTAGNE: What do you know about how he was killed?

MARTON: I know very little. He was shot in the chest in southwest Baltimore. It's likely he was shot multiple times. And he died at the hospital.

MONTAGNE: When you put this out in the world, what kind of reaction have you gotten from this post?

MARTON: I've gotten a lot of reaction. It's been overwhelmingly positive. It's been shared a couple thousand times. And one interesting thing that's happened since I put the post out is how many people I've heard from that actually knew Thelonious. I've heard from several family members. They say that he had a lifestyle that most people think is wrong, but, you know, they considered him a really good person. And he was always trying to turn his life around. And they talk about the great loss that they feel now that Thelonious is gone. And I think that's just really telling, especially when all you have to look at is a criminal record. This was a loved person who was trying to make his life better. I've also heard from people in the system who knew Thelonius, including a Baltimore city public defender, where she told me that she personally has lost 15 or 16 young men that she's worked with to homicide over the years and how much that affects her and the other public defenders in Baltimore City. And I just find that to be such a profound statement. We always talk about systematic failures and how these young men are failed by the system, but here we have people in the system who clearly care and are also deeply affected by these murders.

MONTAGNE: That was Baltimore Sun editor Adam Marton talking about the death of a young Baltimore man named Thelonious Monk. He was killed in that city - one of 344 homicides in Baltimore in 2015.