Accessibility links
'Steal The Sky' Puts A Swashbuckling Spin On Familiar Fantasy Megan O'Keefe kicks off a new fantasy series with Steal the Sky, an adventure set in an arid land where rare-element powered airships sail above mining towns packed with charming crooks and con men.

'Steal The Sky' Puts A Swashbuckling Spin On Familiar Fantasy

'Steal The Sky' Puts A Swashbuckling Spin On Familiar Fantasy 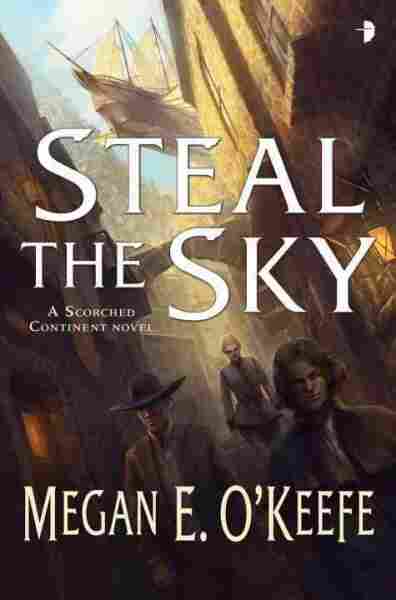 "Green things did not last long in the Scorched." With simple yet foreboding lines like this, Megan E. O'Keefe paints a vivid portrait of a tough, bitter world in her debut science-fantasy novel Steal the Sky. It takes place in the city of Aransa, a mining town on the Scorched Continent, a land whose ancient abundance long ago gave way to arid desolation. Selium is the commodity being mined in Aransa; it's a rare element that enables vast airships to sail the skies above and beyond the city. And with that scarcity comes a caste system, racial injustice and power struggles over who will control the production of selium.

As cruel as Aransa can be, O'Keefe stocks her setting with a decidedly less grim cast of characters. Detan Honding is a con man and ne'er-do-well whose roguish charm keeps him and his sidekick Tibs out of jail, but only barely. His sparring partner is Ripka Leshe, a watch-captain who realizes she and Detan have a common goal — one that involves the city's ongoing political machinations, particularly the rise of Thratia Ganal, a notorious military leader with a populist appeal. Forming an uneasy alliance, the crook and the cop begin to unearth deadly secrets in their perilous attempt to do right by their city (or just themselves, as the case may be). It's serious business, but O'Keefe keeps the intricacies of her story relatively light, fleet and tangle-free, even as deceits, double-crosses and bodies start to pile up.

O'Keefe isn't threatening to break any new ground with Steal the Sky, which is the first installment of her Scorched Continent Trilogy. She draws heavily from Scott Lynch's Gentleman Bastards — another series that deals in sly thieves and high politics — and there are obvious parallels between selium and melange, the spice that compels entire civilizations to clash in Frank Herbert's Dune. As with melange, selium has its secrets, including its relationship to sel-sensitives, those who have the genetic ability to sense and manipulate selium, and are both oppressed and vital to the workings of Aransa.

That said, Steal the Sky doesn't need an abundance of originality to work, and work well. Detan boils over with charisma and sharp one-liners as he and Tibs skulk, scamper and scheme their way into the heart of Aransa's deadliest secrets — not to mention a swashbuckling plan to swipe the Larkspur, the most magnificent airship in the Scorched — and O'Keefe's plot is as swift as it is deceptively complex. It's a buddy tale, a heist caper, a socioeconomic thriller and a steampunk-seasoned fantasia all at once. And it fires beautifully on all cylinders.

If there's another writer to whom O'Keefe owes a debt, it's Joss Whedon. Hints of the Firefly creator's trademark wit, poignancy and turn-on-a-dime banter abound in Steal the Sky. Those hints are more than welcome; O'Keefe's dialogue is as nimble as Detan's thieving fingers, and his inevitable tragic secrets lend needed gravitas to his wise-cracking, card-sharp persona. And in Pelkaia Teria — an older woman who, as a hated and feared doppel, possesses the ability to use selium to mask her appearance and take on the identity of others — the book rounds out its ensemble with emotional depth as well as an expansion of its already formidable world-building. Green things may not last long in the Scorched, but with Steal the Sky, O'Keefe has cultivated fertile ground for the next books in her promising trilogy to grow.