Accessibility links
Not My Job: Ice Cube Answers 3 Questions About Very Bad Days One of Ice Cube's biggest hits was called "It Was a Good Day," so we're going to quiz him on the opposite. 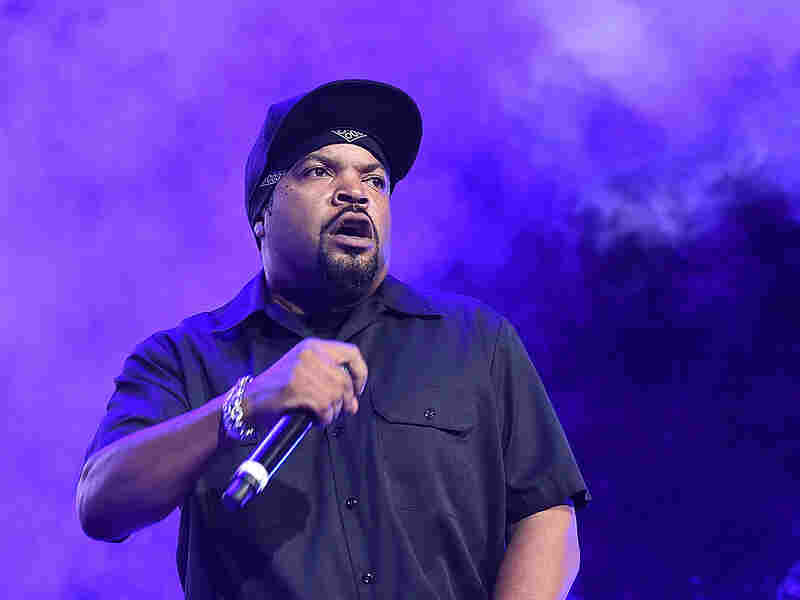 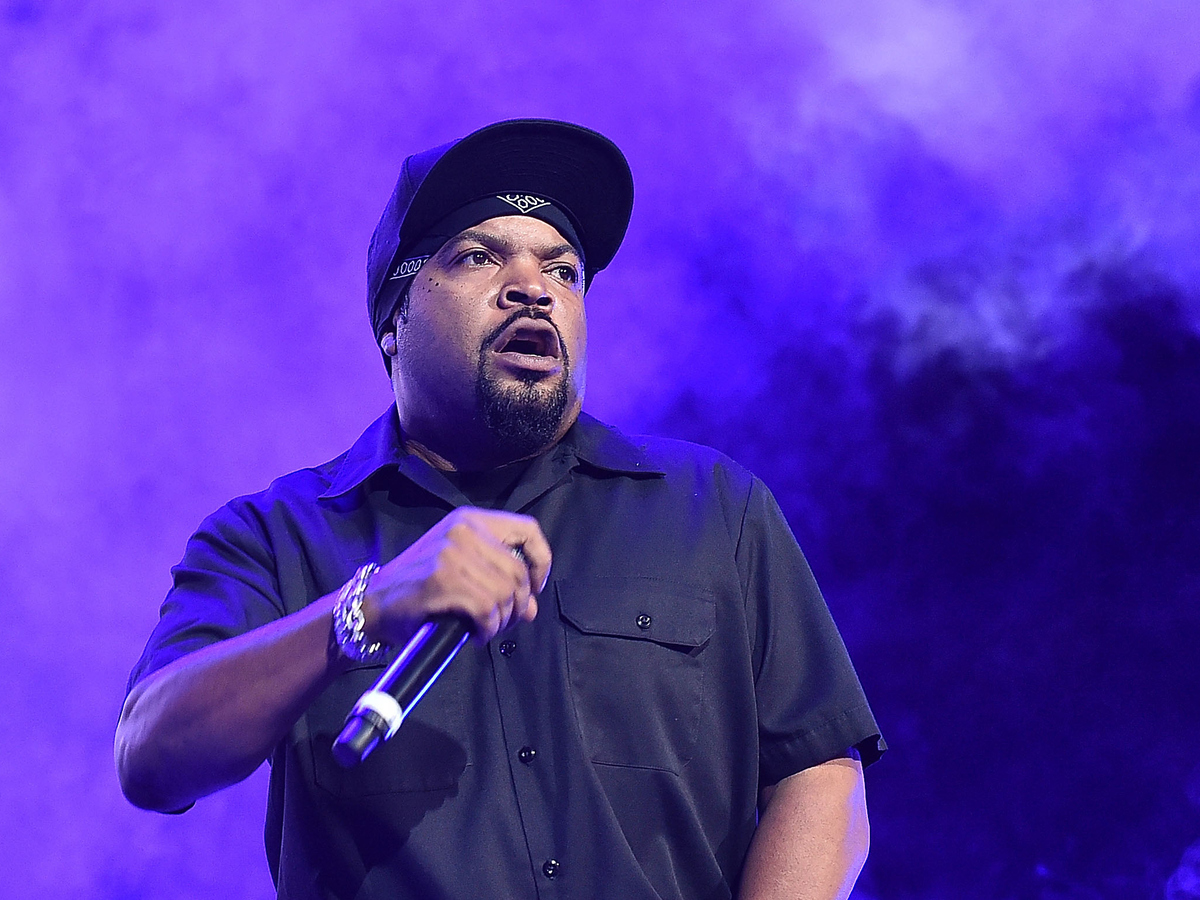 Not many musicians become huge, genre-creating successes. Even fewer become successful movie actors, writers and producers. And as far as we know, Ice Cube is the only one who has produced a hit movie about his own first band with his own son playing himself.

One of Ice Cube's biggest hits was a song called "It Was a Good Day," so we've invited him to answer three questions about people having very bad days.

And now the game where we ask accomplished people to accomplish one more thing. It's called Not My Job. Not many musicians become huge genre-creating successes. Even fewer become successful movie actors, writers and producers. But as far as we know, only one has produced a hit movie about his own first group with his own son playing himself in it. That would be Ice Cube. It is a pleasure, sir, to welcome you to WAIT WAIT... DON'T TELL ME.

ICE CUBE: Yeah, yeah, thanks for having me.

SAGAL: It's a pleasure to talk to you. I've got to say - I saw the film that you produced, "Straight Outta Compton..."

SAGAL: ...About yourself and your friends who were in the seminal band N.W.A. I didn't know anything about hip-hop in the '80s and '90s. Now I feel I'm an expert so thanks.

SAGAL: But let me ask you, how did you - how did you get the name Ice Cube? How did that start?

ICE CUBE: I got the name from my brother. You know, my brother is - he's about nine years older than me. But when I came into puberty...

ICE CUBE: ...You know, I used to try and mack (ph) his girlfriends down because he was never at home.

ICE CUBE: They would always call. So I 'd try to, you know, put my mack down. He was like man, you know what? I'm going to pack you in the refrigerator. No, I'm going to slam you in the freezer. You know what I mean? And mama's going to find you in the freezer. And then they're going to just pull you out like an ice cube, you know what I'm saying? So I'm like well, OK. So when I went outside that day, I was like man, don't call me nothing. My name's Ice Cube. Just - I'm that cool, just call me Ice Cube. And it just stuck since I was about 12 years old.

SAGAL: So one of the things that I was amazed to find out in watching the film is that obviously, you know, you guys, N.W.A., you're associated with the creation of gangsta rap - very tough, very, very street, as they say. But was that your background?

ICE CUBE: Yeah, I grew up right in the hood, man, right there. It's in the middle of South Central LA. And I got bused to a white school that's in Woodland Hills.

SAGAL: Yeah, that scene is in the film. So you - everyday, you'd leave South Central on a bus...

SAGAL: ...And they'd take you to Woodland Hills, which is a pretty...

SAGAL: Was that weird? Did you enjoy it?

ICE CUBE: No. You know, it was like - there was already corny groups doing stuff about - (laughter) about life in the suburbs.

ICE CUBE: You know, so, you know, we was trying to make sense of our life in the hood.

ICE CUBE: You know, it was crazy, you know, the police was crazy, gang-banging was crazy, and then here comes hip-hop. It was like a way to express yourself. So we were just trying to make sense of everything that we were living through.

SAGAL: Now that is very clear in the film. And I can ask you about this film all day. But the one thing that I'm amazed at is in the film, you, Ice Cube, are played by your own son...

ICE CUBE: He is mine.

SAGAL: Yeah, well, that's very clear. You have nothing to worry about, sir. He's obviously your son.

SAGAL: How weird was it for you? You were a producer on the film. You are, like, let's take that hotel party, which is the most amazing rock 'n' roll hotel party scene I've ever seen, and you're saying to your son OK, this is what I did then.

SAGAL: Was that ever weird?

ICE CUBE: No. I was like man, grab them [expletive].

SAGAL: I mean, you were fine with it. Did your son ever go, like, dad, you did not really do that? And you're like yes, I did.

ICE CUBE: The only thing he asked me that he was shocked...

ICE CUBE: ...He said why did y'all take some many guns on tour? You know, that's all he wanted to know - why did we take so many guns on tour? Because - I said we came from a gang-bang-infested neighborhood. And then they was talking about - yeah, I mean, you've got a show in Alabama, man, you've got a show in Tennessee. And we were like yo, we need to take guns, man. We don't know what's going on out there.

SAGAL: The movie is amazing. I recommend it. But I want to ask you about what you're doing now because you have made a transition quite successfully. You've been an actor in so many films. When you were a kid, living on the streets of South Central, getting into rap, getting into that whole thing, did you say to your friends someday, man, I'm going to get out of here, and I'm going to do a cameo on "Sesame Street" with Elmo himself?

SAGAL: I have to check this with you. We did some research, and according to one website, it says your favorite film - you, Ice Cube, gangster rapper - your favorite movie is "Pretty Woman." Is that true?

ICE CUBE: Man, you know you can't believe everything you read.

SAGAL: Oh, I was hoping it was true - would've been charming.

SAGAL: Well, can you tell us what your favorite movie is?

SAGAL: Well, Ice Cube, it is a pleasure to talk to you. But we have asked you here to play a game we're calling...

BILL KURTIS: It Was A Very Bad Day.

SAGAL: So one of your biggest hits...

SAGAL: ...If not your biggest is a song called "It Was A Good Day." So we thought we'd ask you three questions about people who had a very bad day. Answer two of them correctly, you'll win our prize - Carl Kasell's voice dropping some sick rhymes on a listener's voicemail. Bill, who is Ice Cube playing for?

SAGAL: All right, you ready to do this?

SAGAL: All right, Cube - just a couple of weeks ago, a Virginia prisoner thought he was having a good day when his wife finally came to visit him in jail. Turned out it was a bad day - why? A, first thing his wife said to him in front of the guards was good news, honey, they haven't found the money you gave me to hide...

SAGAL: ...B, his other wife came to visit him at the same time or C, he called her by the wrong name and she broke a chair over his head.

ICE CUBE: The other woman came...

SAGAL: There's a lesson for all of us - stagger their visits.

SAGAL: All right, that's very good. In 2009, a writer for the London Telegraph newspaper described her bad day in an article headlined what? Is it A, Nudity And Jellyfish Don't Mix, B, My Eyes Were Bigger Than My Kidneys or C, If They Didn't Want Me To Run Into Buckingham Palace, They Should Have Given The Guards Real Hats.

SAGAL: You're going to say C.

ICE CUBE: ...Because, you know, that right there sounds wild. I like that one.

SAGAL: I like that, too. It would be cool, and seriously, those guys' hats are ridiculous. They're not real guards. But actually...

SAGAL: But actually - it was A, actually - Nudity And Jellyfish Don't Mix. It's an account of going skinny-dipping, as she likes to do, in jellyfish-infested waters. It did not work out. However, it could work out for you because you have one more question. Here we go. In May of last year, a driver in Florida drove his truck into a fire hydrant. That would be a bad day all by itself, but then what happened? A, the water sprayed all over his shipment of cotton candy, causing him $30,000 in losses, the fire hydrant was in front of Tiger Woods' ex-wife's house and she came out with a golf club yelling not again...

SAGAL: ...Or C, he got out of truck to inspect the hydrant and locked himself out of the truck. Meanwhile, the flooding from the fire hydrant caused a sinkhole. He kicked in the back window of his truck, got in to drive away but he drove back into the sinkhole.

SAGAL: There's nothing more to say about it, a bad day.

SAGAL: Bill, how did Ice Cube do on our quiz?

SAGAL: That's how you do it in the streets of South Central.

ICE CUBE: Put the check in my mama's name. You know, my credit's bad, man.

SAGAL: Ice Cube is a founding member of N.W.A., the rap group recently inducted into the Rock and Roll Hall of Fame. He's an actor, a screenwriter. He produced last year's "Straight Outta Compton," an amazing film. You can see him next in the comedy "Ride Along 2" in theaters January 15. Ice Cube, thank you so much for joining us, what a pleasure.

SAGAL: It was fun. Thank you so much.

(SOUNDBITE OF SONG, "IT WAS A GOOD DAY")

ICE CUBE: (Singing) Just waking up in the morning, got to thank God. I don't know but today seems kinda odd. No barkin from the dog, no smog and momma cooked a breakfast with no hog. I got my grub on but didn't pig out...

SAGAL: In just a minute, Bill shaves me like one of his French girls. It's the Listener Limerick Challenge. Call 1-888-WAIT-WAIT to join us on air. We'll be back in a minute with more of WAIT WAIT... DON'T TELL ME from NPR.