Accessibility links
After 40 Years, One Of America's Longest-Serving Mayor Steps Down Joe Riley has been mayor of Charleston, S.C. for 40 years. His tenure has seen the transformation of downtown Charleston, and recently, the alleged racially-motivated murders at Emmanuel AME Church. 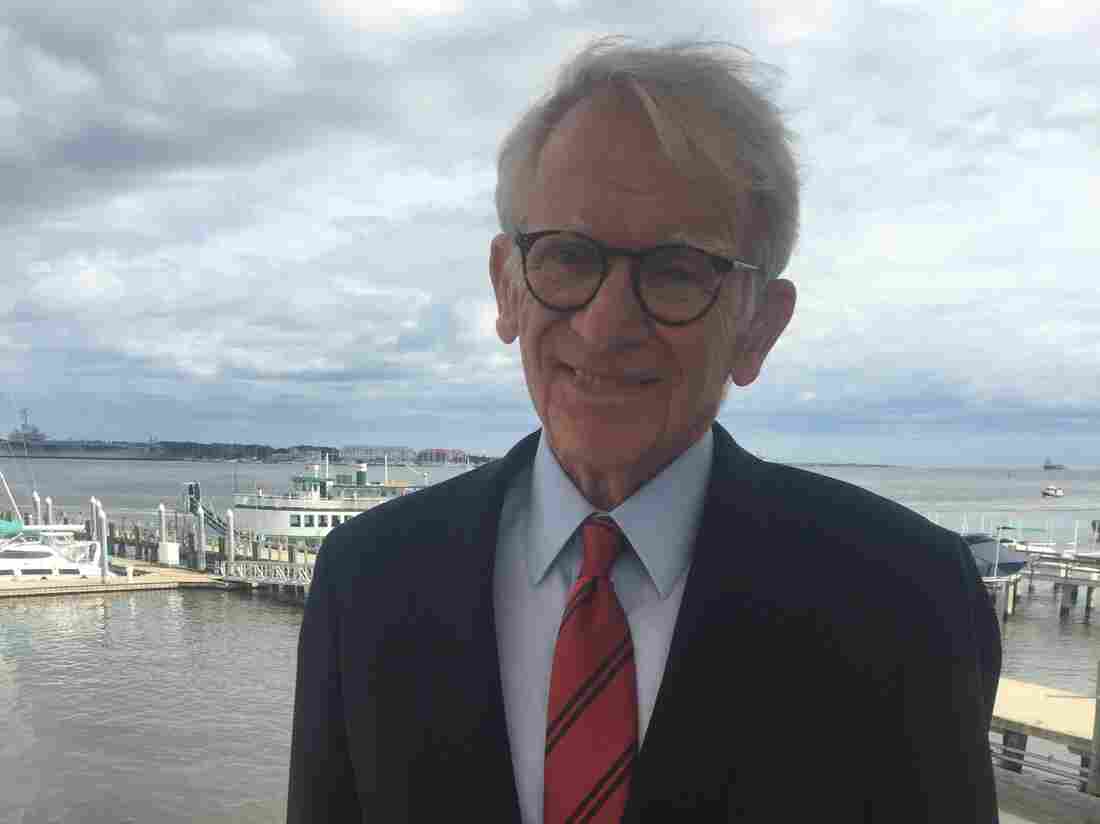 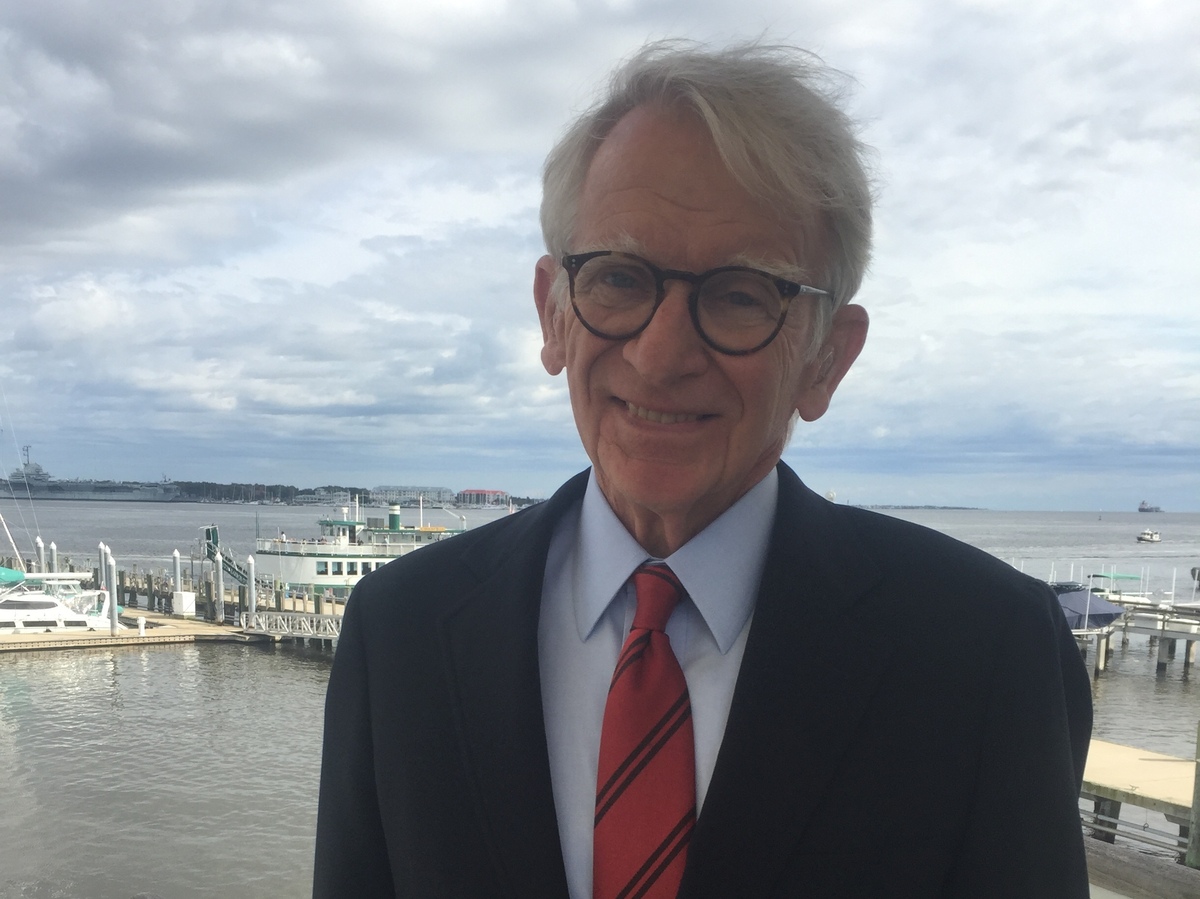 Mayor Joe Riley of Charleston, S.C. is the longest-serving mayor in the country.

It's the end of an era in Charleston, S.C. One of the longest-serving mayors in the country, Joe Riley, is retiring after 40 years in office. His tenure has seen the transformation of downtown Charleston from a decaying urban center to a top cultural destination.

On a tour of downtown, you can literally see Riley's imprint on the Charleston landscape, down to the most subtle of details – from the paint color at City Hall to the color of the driveway bricks.

"That's Riley Red," he says with a laugh. "It's not because of my hard head, that's just the color."

Joe Riley's hard head does come into play because run-of-the-mill brick wouldn't do. He wanted the right hue to complement the historic city's palette, and harken back to brick carriageways.

Riley's influence extended to development projects. Charleston Place, a retail and hotel complex, was once dubbed "Riley's Folly" when he first proposed incentives for redeveloping a vacant lot in the heart of downtown.

But Riley is quick to point out success stories.

"King Street, our main street, which in the 70s was almost gone, is now on the list as one of the ten best shopping streets in America. It's up there with Fifth Avenue and Michigan Avenue and Rodeo Drive. And this one redevelopment did it," he says.

Riley has a reputation for being personable and accessible to average citizens. He exudes the Southern charm his city is known for.

Wearing his signature horn-rimmed eyeglasses, the 72-year-old is clearly passionate about the way his city looks and feels. He's known as an urban design guru among the country's mayors.

"A city is an ecosystem," Riley says. "If your ecosystem is not healthy, then you work to restore it."

Charleston was not healthy when Joseph P. Riley, Jr. was first elected in 1975. Downtown was lifeless. Racial divisions laid bare in the first decade after the civil rights movement. He was a 32-year-old state lawmaker at the time.

He recalls the election as a turning point.

Riley won, and he included African-Americans in city administration for the first time. He appointed the city's first black police chief. And Charleston was one of the first southern cities to observe the Martin Luther King Jr. holiday.

Riley earned a nickname for his efforts, "LBJ." But it wasn't a comparison to the former president.

"People said that behind my back. Stood for Little Black Joe," Riley says. "I never worried about that. That to me was a compliment. Because what I knew I needed to do was substantially be communicating to the African-American community that this city was theirs. It was everybody's."

He intended to serve one term, but he says there was always unfinished business. "I haven't wanted to stop, and the voters haven't told me to stop," he told The New York Times in 2011.

That year, Riley scored a solid victory, garnering more than 67 percent of the vote in his tenth election as mayor. He calls it the best job in America.

Riley's only election defeat came in 1994, after he lost a bid to become the Democratic nominee for governor.

Today, Joe Riley is a Democrat with staying power even as Republicans have come to dominate South Carolina politics. He first gained national attention in 1989 dealing with the destruction wrought by Hurricane Hugo. His crisis leadership was again in the spotlight when a gunman killed nine people at the Emanuel AME Church in what authorities described as a racially-motivated attack. 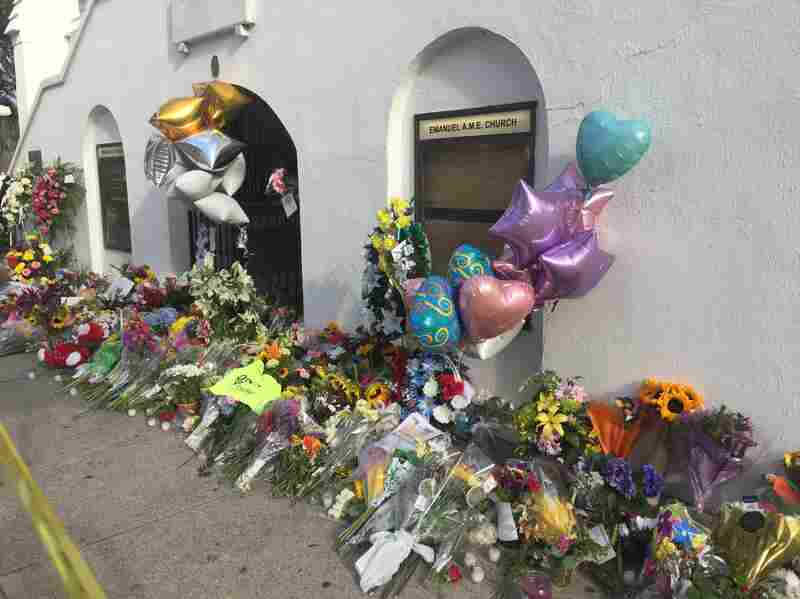 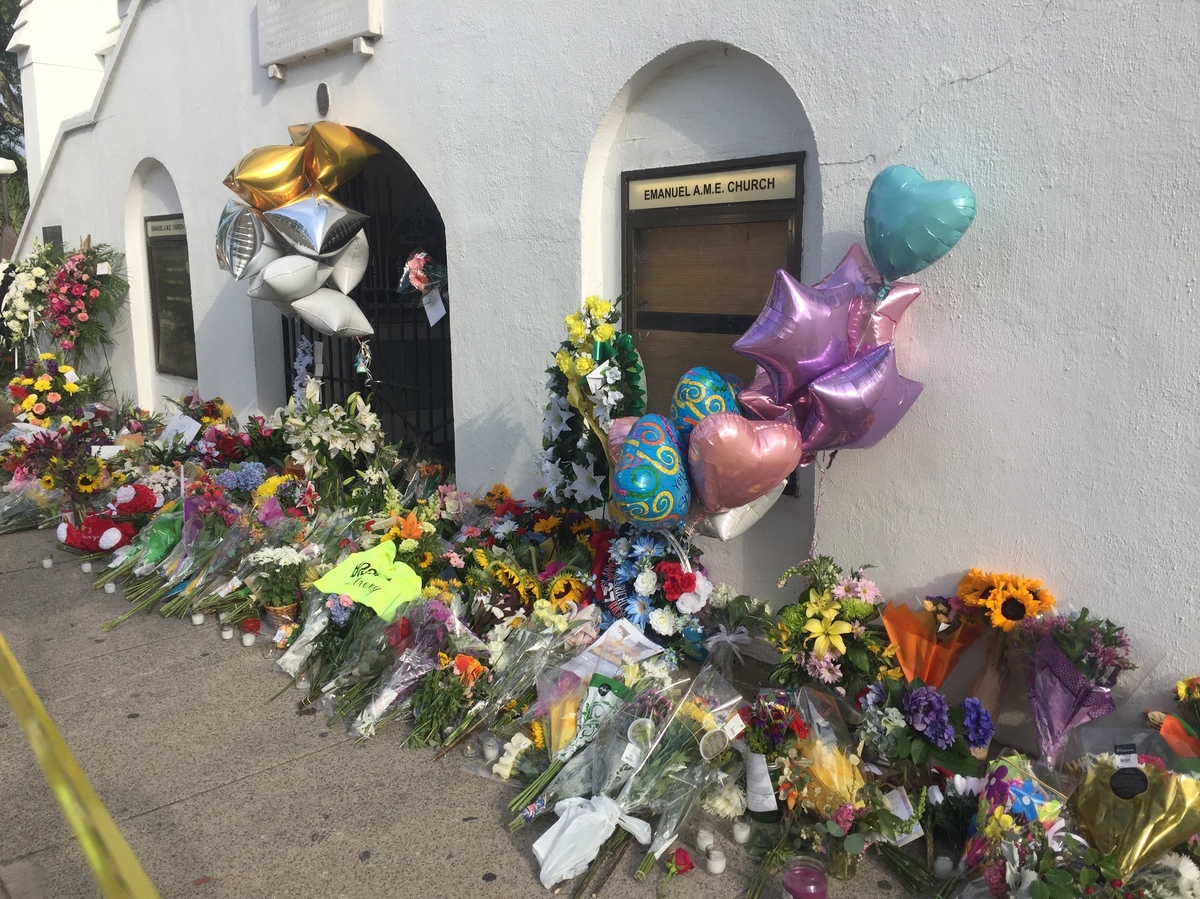 Community members placed flowers at the Emanuel AME Church in Charleston, S.C. after a gunman killed nine people there.

Riley says that was his most challenging time as mayor, but he says he was proud to see Charleston respond to an act of hate with love and forgiveness.

"What the families did and what the citizens of Charleston did was in our saddest, most heartbreaking time, they made it the city's finest hour," he says.

Charleston is enjoying a modern cultural renaissance with its noted food scene, the popular Spoleto Arts Festival, and booming tourism.

Riley has had to carefully navigate preserving the nearly 350-year-old port city with progress that has made Charleston a top draw for both visitors and new businesses.

"Companies are growing here. It's really become kind of a creative town," says Rebecca Darwin, the founder and CEO of Garden and Gun magazine, which is headquartered in Charleston. She credits the mayor for making it a livable yet vibrant city.

"Because of Joe Riley, this is an incredible place for people to live," she says. "When it came time for me to recruit the best talent in the world to come here and work for Garden and Gun, a little struggling magazine at the time that couldn't pay New York salaries, and we were able to get those people to come here because of the quality of life in this place and the excitement that was surrounding Charleston."

There's a new $140 million performing arts center, an expansive waterfront park, and a minor league baseball park named after the mayor. It's nicknamed "The Joe."

Riley says aesthetics and public space are important for everyone in a city.

"Whatever income strata you are or education level, you still are nourished by something that you feel looks nice. And that's what great cities in the world have always done – always cared about their built environment." 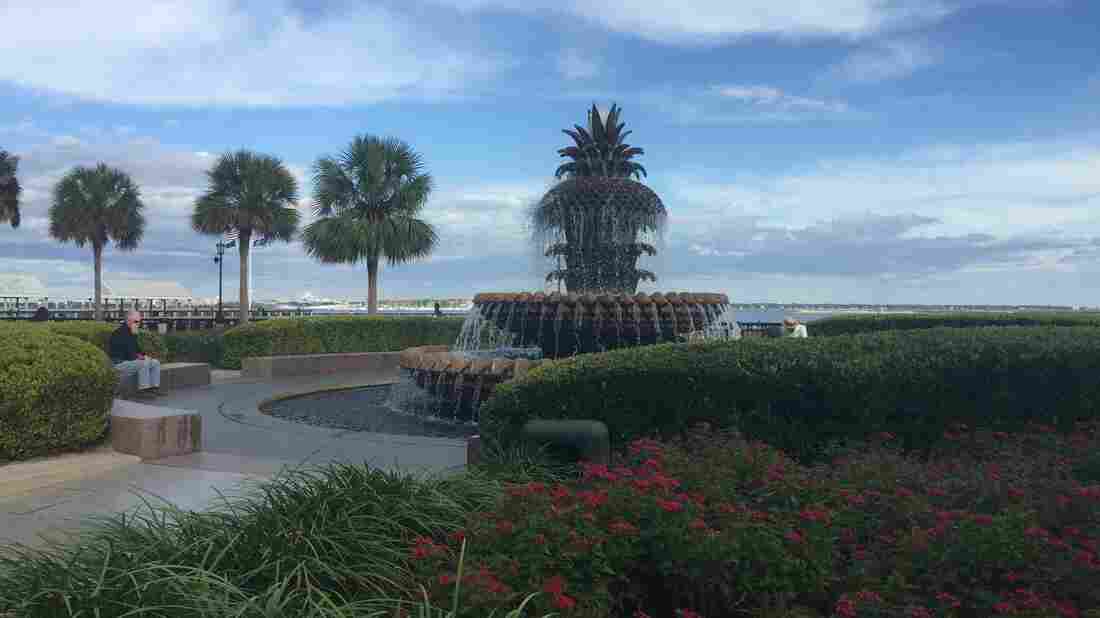 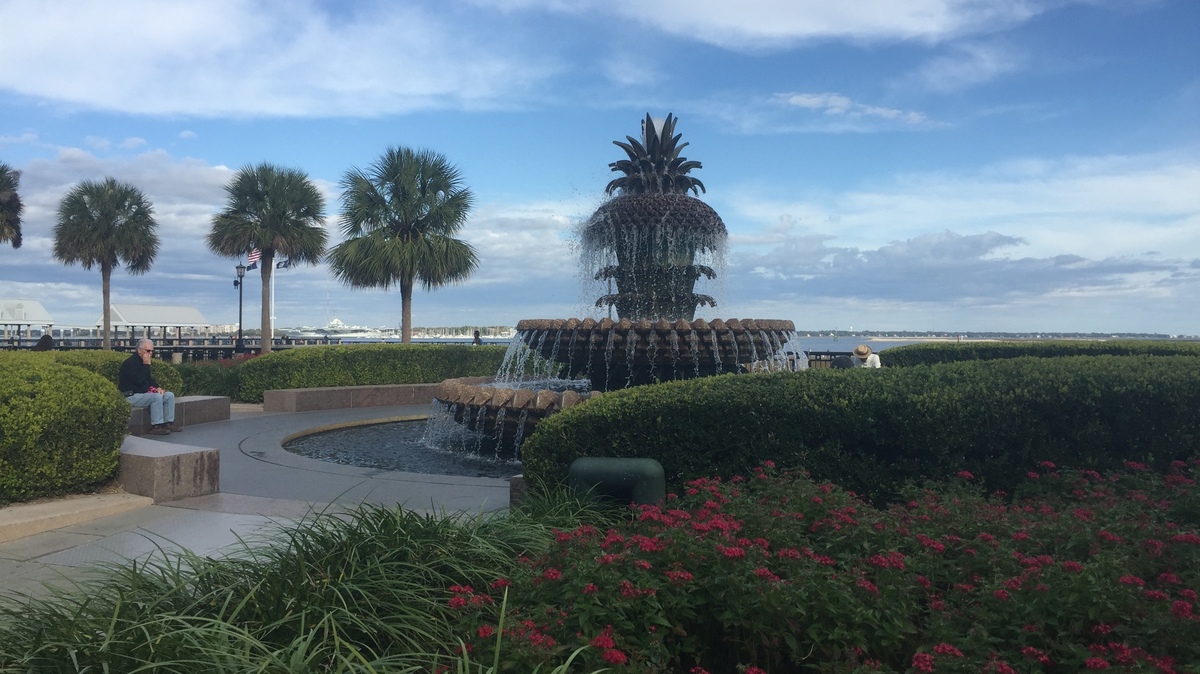 Construction worker Nate Brown sits on a bench along the harbor in Charleston's waterfront park.

"When I'm not working I come here," Brown says. "Sometimes I just stay in the waterfront park and just relax and think."

Brown, a Charleston native, worked on the recent renovation of the city's performance hall. He credits Mayor Riley with making the city better.

But some are critical of what they call the "Riley machine." He's used a strong-mayor form of government to push his vision of Charleston. He's been up against preservationists, developers, and most recently old-line residents who don't want to see a cruise ship dock in the Charleston Harbor. Others say he's overseen a revitalization that didn't benefit everyone.

"Charleston, like a lot of places, unfortunately is a tale of two cities," says Barney Blakeney, a writer for the Charleston Chronicle, the city's African-American weekly newspaper.

"In one aspect Joe Riley has been the person who revitalized Charleston at a time of crisis," Blakeney says. But during Riley's tenure, racial demographics flipped.

But for African-Americans, Blakeney says, there's a bigger picture. The city's overall population has grown, but the share of black residents has shrunk dramatically –- from 45 percent in 1970, to about 25 percent now.

"Today as he leaves office, the city of Charleston is 70 percent white," Blakeney says. "Joe Riley totally flipped the racial demographics in Charleston during his 40-year tenure."

Mayor Riley acknowledges gentrification has been a concern, but he says maintaining affordable housing has been a priority. His latest initiative is aimed at recognizing the role that race has played in Charleston's story.

The issue of race has always been part of Charleston's story. Mayor Riley's tour ends at a green space along the Cooper River, the site of Gadsden's Wharf dating to the late 1700s. He calls it a sacred place.

The view from the green space includes landmarks of the Civil War.

"You look past Fort Sumter where the first shot of the bloodiest war in our nation's history was fired because of the institution of slavery," Riley says.

The land now belongs to the city. In his retirement, Riley plans to help raise money to build an African-American history museum and memorial.

The new mayor, John Tecklenburg, will be sworn in Monday.

A previous version of this story named Joseph Riley as the longest-serving mayor in America. In fact, multiple people have served as mayors of American cities longer than Riley's 40-year stint as mayor of Charleston.