Accessibility links
60 Years Later, A Wild, Baffling Recording Finds A Modern Spark In 1954, Folkways Records released an album that sold so poorly, the royalties to date total less than a thousand dollars. Today, five of the top names in klezmer have gathered to recreate it. 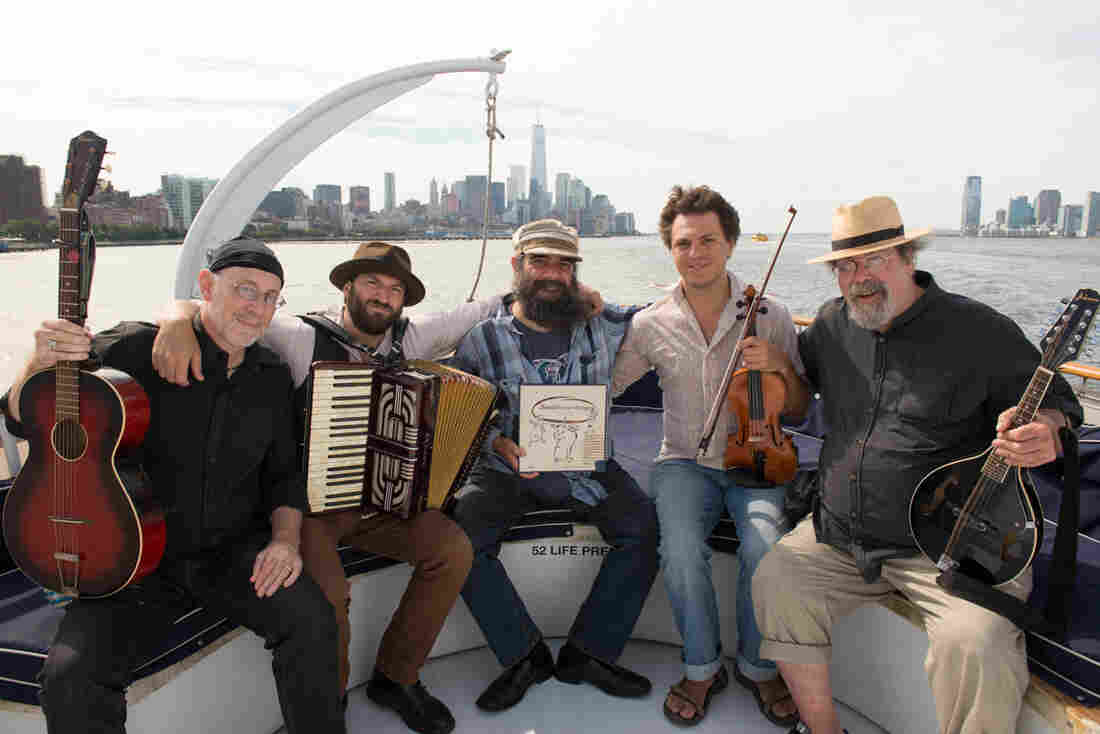 The Brothers Nazaroff is five klezmer musicians from three continents, brought together by a love of the curious 1954 recording Jewish Freilach Songs. Fumie Suzuki hide caption 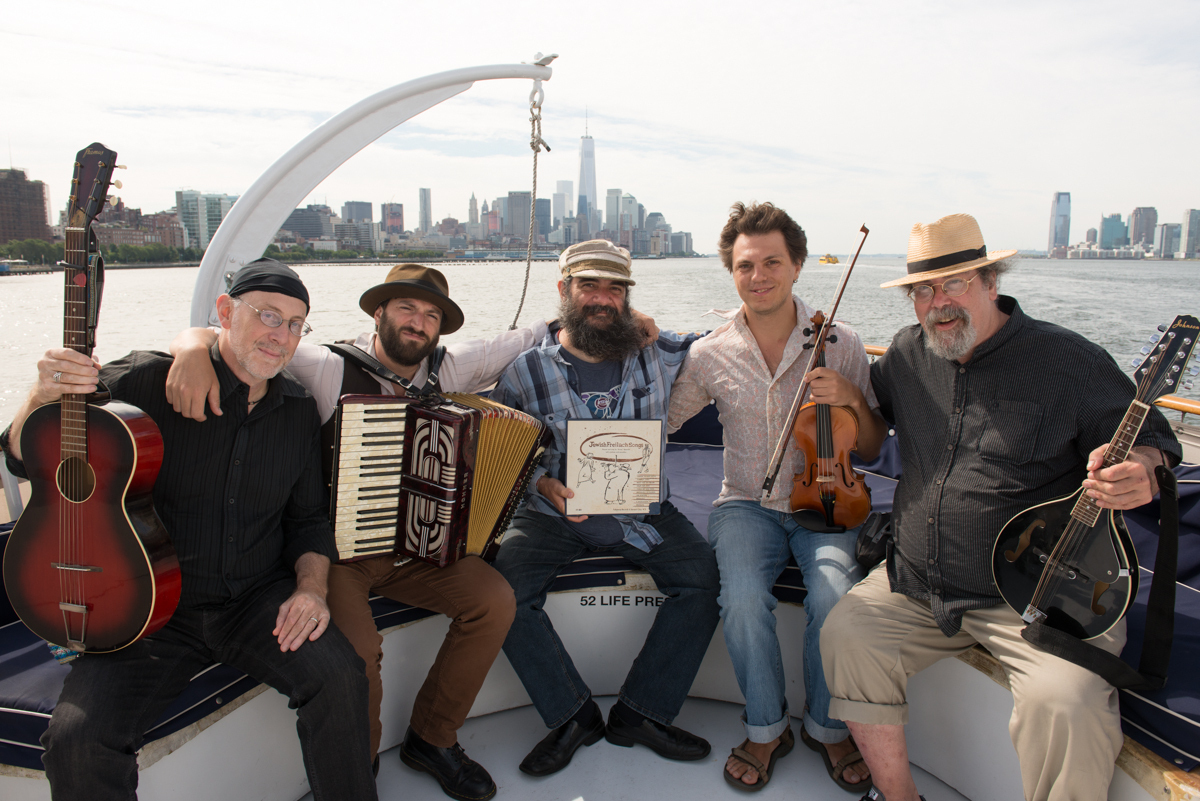 The Brothers Nazaroff is five klezmer musicians from three continents, brought together by a love of the curious 1954 recording Jewish Freilach Songs.

[Update: Since this story aired, listeners have come forward with new information on the identity of "Prince" Nazaroff — including some members of the musician's family. Hear Jon Kalish's follow-up piece.]

Playing Yiddish music in public was once so common among Jewish immigrants who lived near the beaches in New York and Los Angeles that it came to be known as "boardwalk music." That's where I found The Brothers Nazaroff: on the boardwalk at Coney Island, being filmed by a Hungarian director making a documentary about the klezmer group.

"Not everybody loves this, you know?" says the band's accordion player, Daniel Kahn. "And I don't expect everybody to love it. This is for people who are willing to have a good time, people who understand it's subversive to be joyous in public." 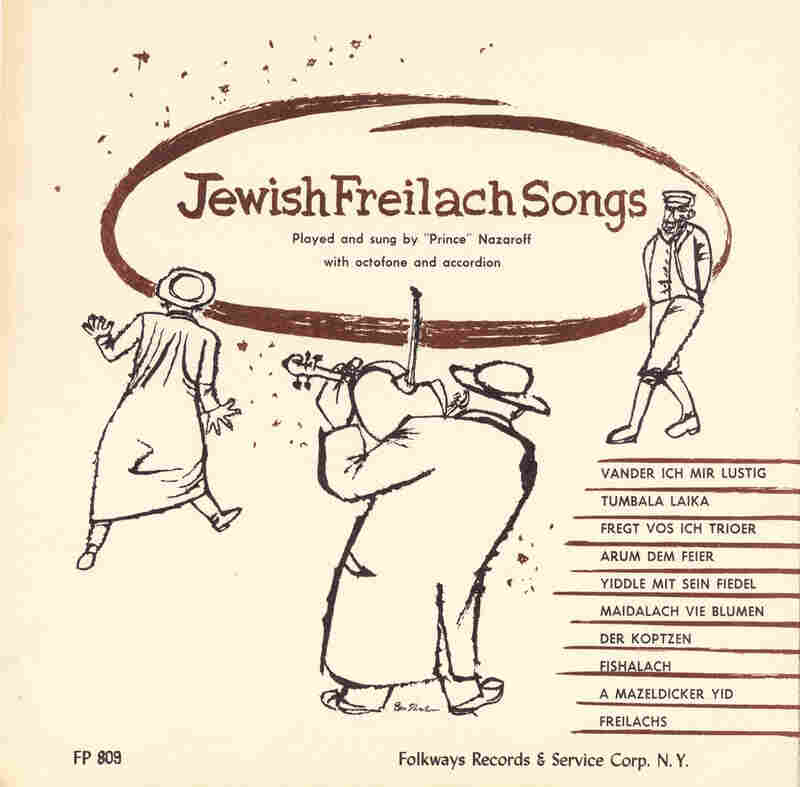 That's an understandable attitude when you consider the band's namesake. In 1954, Folkways Records released an album by a mysterious man known as "Prince" Nazaroff. The 10-inch Jewish Freilach Songs sold so poorly that to date, the royalties total less than a thousand dollars. And yet, the recording has inspired several generations of musicians and writers since then.

The Brothers Nazaroff are remaking the disc with a tribute release called The Happy Prince — though the group, which comprises klezmer musicians from three continents, is a lot more polished than their inspiration. Michael Wex, author of the best-selling book Born to Kvetch: Yiddish Language and Culture in All Its Moods, says he was taken aback when when he heard the original 1954 recording.

"My my initial reaction to it was, 'How the hell did this get recorded?'" he says. "It sounds like the Yiddish-speaking janitor and a bunch of his friends at Folkways broke in one night, and just sort of seized the equipment and started playing songs."

Wex points out that Folkways Records head Moe Asch was the son of Sholem Asch, the most important Yiddish writer in America in the early 20th Century — so he was certainly plugged in to the Yiddish arts scene. But he thinks there may be another reason Asch put out the Nazaroff 10-inch.

"The Nazaroff stuff was recorded right after Asch had released Harry Smith's Anthology of American Folk Music," he says. "It's almost as if Asch wanted to do a kind of Yiddish pendant to Harry Smith's anthology."

Listeners Uncover Details About Mysterious Muse Behind 'The Brothers Nazaroff'

Because that's where this music was often played: in Yiddish bars. Daniel Kahn says his bandmates think of Prince Nazaroff as the wild grandfather they never met.

"His mandolin, it's out of tune. The accordion's out of tune. But nobody cares — they're just playing as hard and as wild as possible," Kahn says. "The way he spits out his Yiddish lyrics has a kind of raw energy. Frankly, it's the same raw energy that I hear in early punk rock."

Prince Nazaroff's sole album of Yiddish music has brought together some of the biggest names in klezmer music today. In addition to Cohen and Kahn, The Brothers Nazaroff includes the fiddler Jake Shulman-Ment, Russian singer Psoy Korolenko and vocalist and guitarist Michael Alpert, who was named an NEA National Heritage Fellow this year.

But as exuberant as the music is, many of the details of Prince Nazaroff's life remain less clear. We do know that he was born in Russia in 1892, and that a man named Nicholas Nazaroff is listed in U.S. census records as having two children — but Kahn says no one in the band has been able to track them down.

"We have yet to hear from any of his relatives, nor have the people at Smithsonian," Kahn says. "He was buried in countless bargain record crates at the back room of many used record stores. That's the only grave of his that we know of."

But Kahn and the rest of the Brothers Nazaroff have managed a kind of closure: Their new CD is out on the same label that released their namesake's vinyl record more than 60 years ago.

Jon Kalish is a New York-based reporter and writer.