Accessibility links
'Your Heart Is A Muscle' Is A Florid, Ambitious Tale Of Protest Sunil Yapa's new novel follows a group of characters through the 1999 World Trade Organization protests in Seattle. Critic Michael Schaub praises Yapa's ambition, but says his execution is amateurish. 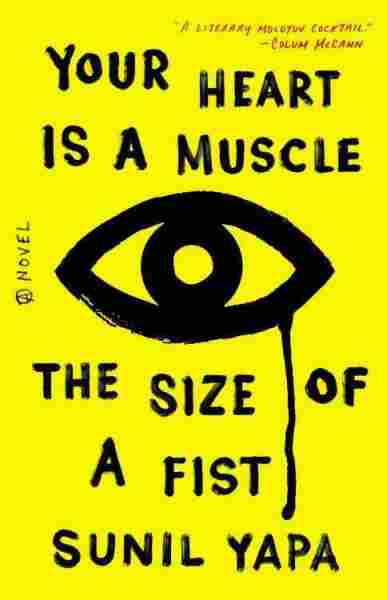 Your Heart Is a Muscle the Size of a Fist

On Nov. 30, 1999, tens of thousands of demonstrators gathered in downtown Seattle to protest the World Trade Organization conference being held at the city's convention center. It didn't take long for the situation to deteriorate; after some protesters started smashing windows and occupying intersections, police officers began to use tear gas and pepper spray in an effort to disperse the crowd.

The chaotic scene is the setting of Sunil Yapa's debut novel, Your Heart Is a Muscle the Size of a Fist. The book takes place entirely on that one afternoon, with the protesters sounding like "fifty thousand desperate flies knocking against fifty thousand closed windows."

Yapa's novel is definitely ambitious. The point of view switches among several characters, chief among them Victor, a teenager who tries to sell marijuana to the gathered activists, and his estranged stepfather, Bishop, the Seattle chief of police, who desperately and fruitlessly tries to keep order downtown. There are also two protesters, two police officers, and a delegate from Sri Lanka trying to make his way to the convention.

Victor has returned to Seattle after years spent wandering the world; he left his home after his mother died and his stepfather, enraged to discover Victor smoking pot, set fire to his most prized possessions — his late mother's collection of books. Victor is homeless, hoping to make some money by selling pot to protesters, who he figures will be eager to snap it up. (They are not.)

He abandons his plan suddenly — everything happens in this book suddenly, and frequently without any discernible reason — when he's saved from arrest by a quicksilver protester named King, herself on the run from the law. Victor decides to join the protest and help block an intersection with another activist, John Henry, King's lover.

You have to give Yapa credit for his ambition, and it's obvious that he's a writer of great compassion. The concept behind 'Your Heart Is a Muscle the Size of a Fist' is a good one, but the execution is, at best, amateurish.

Victor's transition from cynical would-be drug dealer (he was "absolutely allergic to belief") to righteous protester in the space of a few pages is abrupt and inexplicable, but it does move the plot along, which is something. As he readies himself for the inevitable confrontation with his father, the book also follows two police officers — both tough, both unremarkable — and the Sri Lankan delegate who somehow gets mistaken for a demonstrator and is abused by overzealous cops.

Victor is the most fleshed-out character here, and that's not good. If he has real motivations, they're lost in Yapa's incessantly florid prose: "... he could have said his heart was laced with anger, holey as Swiss cheese. His heart of hearts poisoned by a bitter, wounded hatred, a sickness of the soul. But he was too tired for that ... He'd already been here too long. Time to go; to go; to go." (You can tell when Yapa wants you to understand something, because he repeats it several times, several times, several times.)

The rest of the characters are essentially stand-ins for ideals and emotions, or convenient foils for other characters. The two cops are tough but caring, and cruel but damaged, respectively, and the two main protesters are idealists whose thoughts and dialogue read like the bumper stickers on a VW in 1960s Berkeley.

Yapa isn't an untalented writer, but he lets his writing get away from him way too often. At one point, Victor recalls looking at factories with "the smoke curling into the sky like a pencil drawing of a drowned woman's hair," which is a bizarrely tortured simile. Other times, Yapa descends into attempts at aphorism: "Because how deep the darkness of the heart which longs for control," for example, and "What a violence of the spirit to not know the world." After a while, it begins to feel like you're getting lectured by a hippie professor who writes messages for fortune cookies on the side – or listening to a subpar emo band: "John Henry imagined he could see into [King's] lovely bile-filled interiors, her internal spaces, the places where she went alone to dream."

You have to give Yapa credit for his ambition, and it's obvious that he's a writer of great compassion. The concept behind Your Heart Is a Muscle the Size of a Fist is a good one, but the execution is, at best, amateurish. Yapa is undoubtedly intelligent, and he's probably capable of writing a good book. This trainwreck of a novel, however, is not it.