Accessibility links
In Kentucky, The Coal Habit Is Hard To Break The coal region of western Kentucky has managed to keep its mining industry alive through changing energy trends of the past few decades. That is, until now. 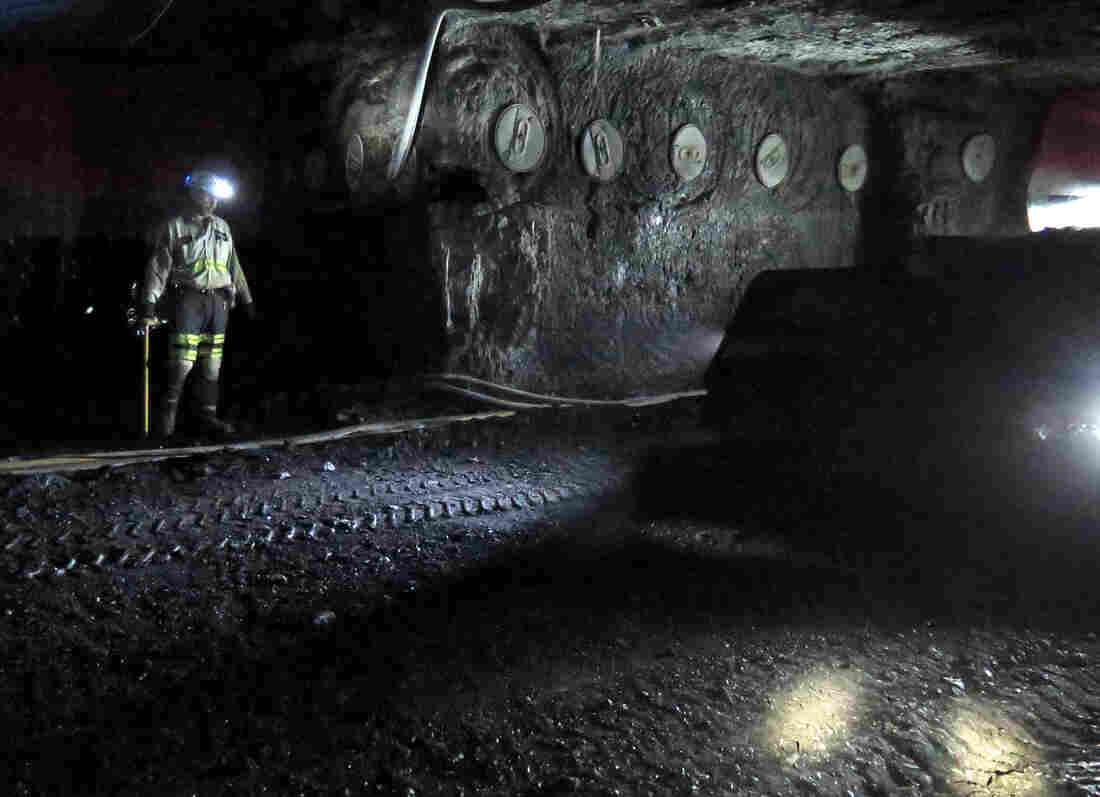 A coal miner stands in the Dotiki mine, operated by Alliance Coal, in Webster County, Ky. Steve Inskeep/NPR hide caption 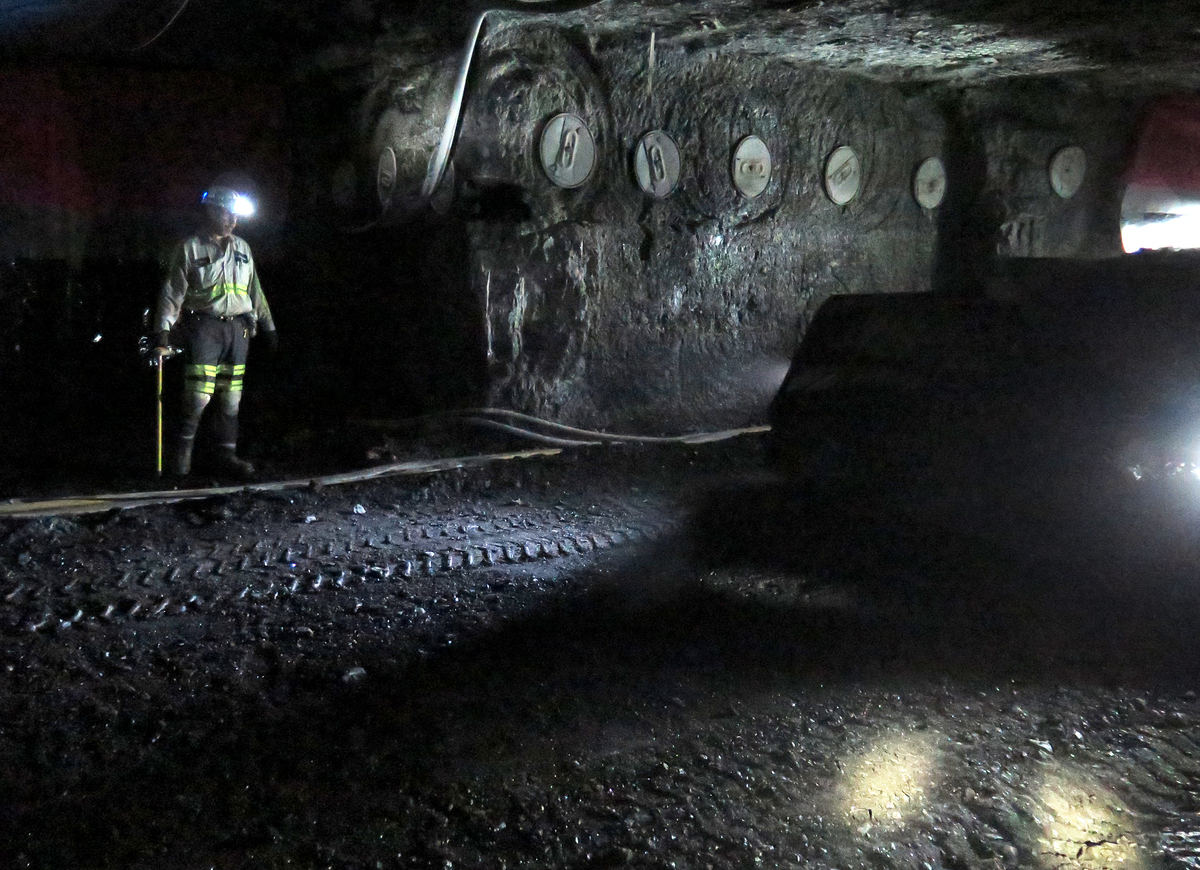 A coal miner stands in the Dotiki mine, operated by Alliance Coal, in Webster County, Ky.

Joe Moore stood near a sign reading: "Authorized Personnel Only."

"I used to be authorized," he said.

Moore is a coal miner. The sign was at the entrance to the mine that had laid him off the previous day. The Alliance Coal facility had closed — a symptom of the coal industry's rapid decline.

The industry is fading even as the rest of the economy grows. The Energy Information Administration estimates that nationwide coal production dropped by as much as 10 percent in 2015. Further declines are expected this year. This week Arch Coal, the nation's second-largest producer, filed for bankruptcy protection. Companies are squeezed between fierce competition and efforts to fight climate change.

'You Need To Find A Different Occupation'

It's a historic challenge to a business, and a way of life, in places like Webster County, in the rolling countryside of western Kentucky. Spend time with miners there and you quickly understand how hard it is to give up an industry that has supported generations of miners since this country's earliest days.

As he drove away from the mine, Moore accidentally made a left turn — inadvertently following the route home from work that he had driven for years. The force of habit was hard to break.

Moore, 57, worked in various mines for 39 years, despite a doctor's advice received long ago.

"I had a chest cold," he recalled. "And I went to the doctor and they had you take your shirt off and my back was just all ripped up. Great big scratches in it."

The scratches came from the ceilings of mine tunnels, which are often too low to stand in. "And he said, 'Who's been beating you?' And I said, that's just from work. And he said, 'You need to find a different occupation.' He said, 'You are damaging your body.' And I said, 'Well, great. You want to adopt me? Because I don't know of anything else I can do.'" 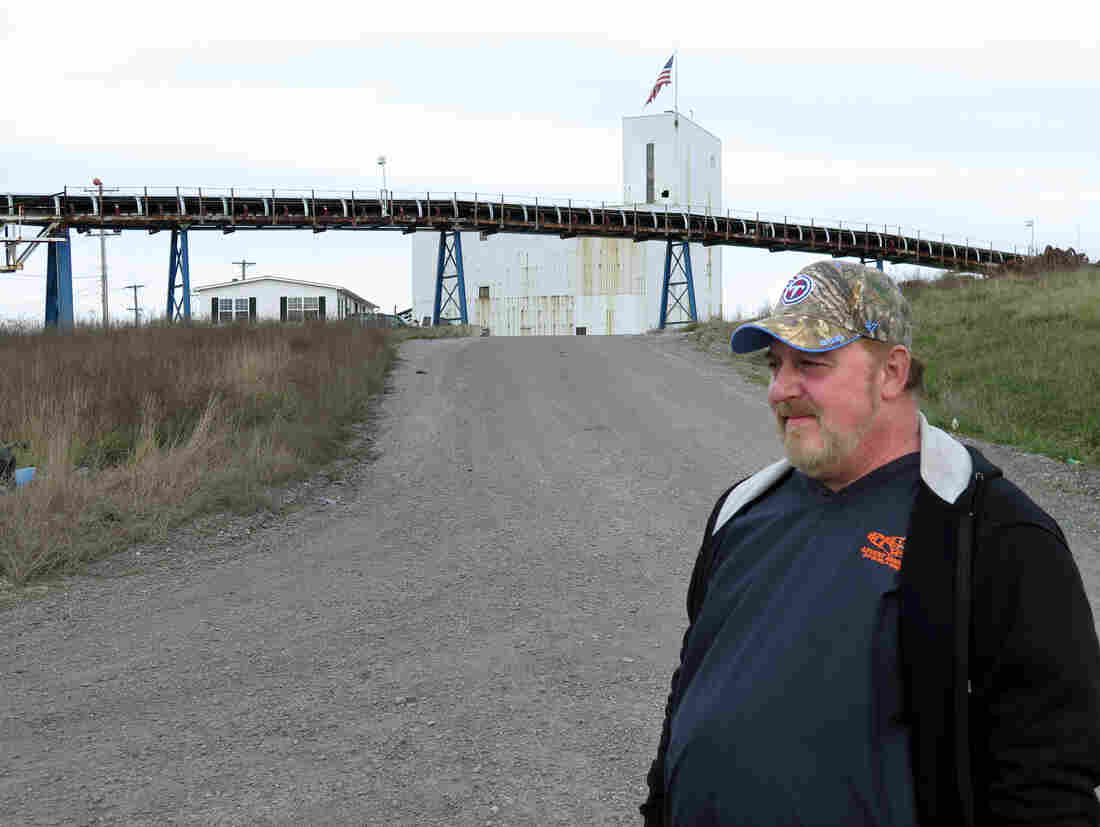 Joe Moore, outside the mine where he used to work. It closed last week. Steve Inskeep/NPR hide caption 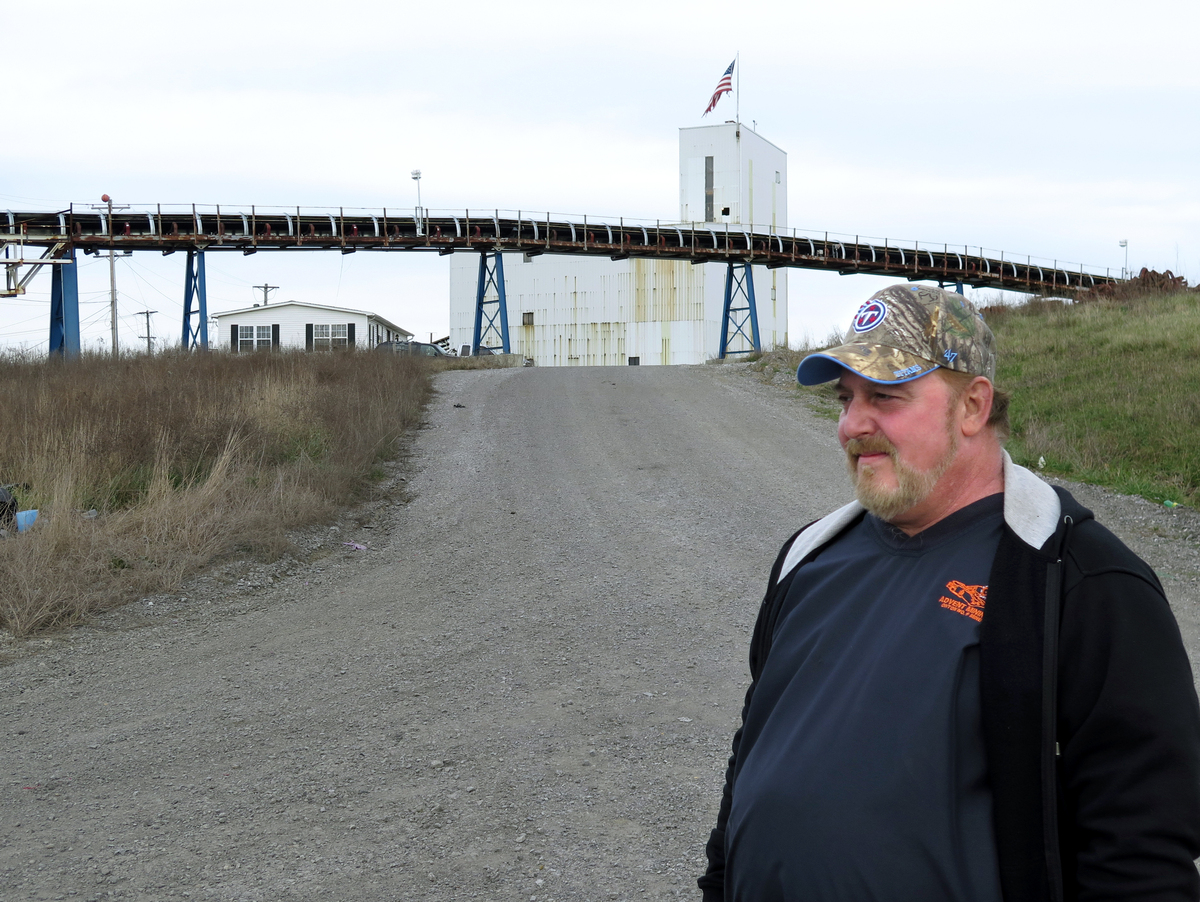 Joe Moore, outside the mine where he used to work. It closed last week.

In exchange for long hours underground, which he often loved, Moore says he earned more than $100,000 per year, including overtime pay.

That level of compensation is not uncommon. When we toured a Webster County mine that is still open — the Dotiki mine, operational since 1967 and owned by Alliance Coal — our producer Ashley Westerman had a surprise. Westerman, who is from Webster County, discovered one of her elementary school classmates working underground as a foreman.

She went off to an East Coast university; he ended up in the mine. Depending on his overtime in a given year, it's likely that he is the one who is paid more.

'I Still Get Excited Every Day'

Money aside, there is something alluring to many people about wandering a vast network of underground tunnels and operating massive high-tech machinery.

In the Dotiki mine, we saw men at work (coal miners in this area are mostly, though not entirely, men). One man had positioned a machine called a continuous miner up against a wall of coal.

A roller turned. Teeth on the roller chewed up the wall. In 38 seconds, a conveyor belt dumped about 16 tons of glittering rock into a waiting truck.

"I still get excited every day," said Gary Thweatt, the mine supervisor, who was showing us around. 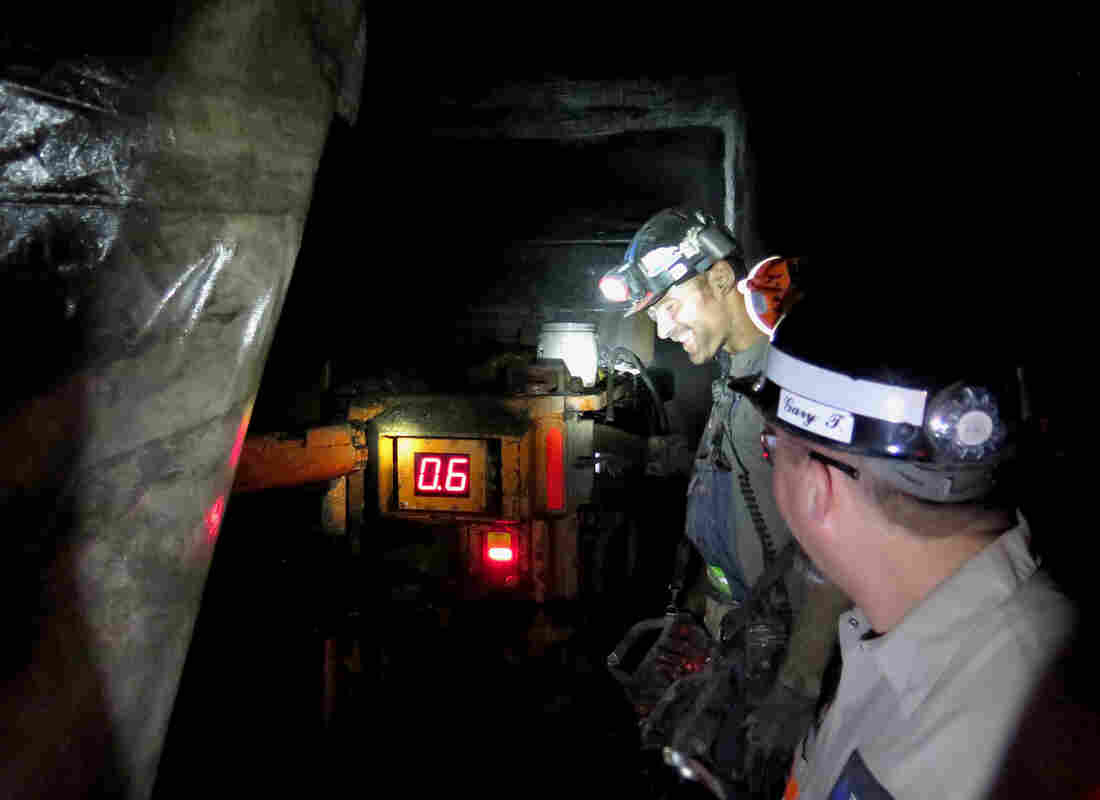 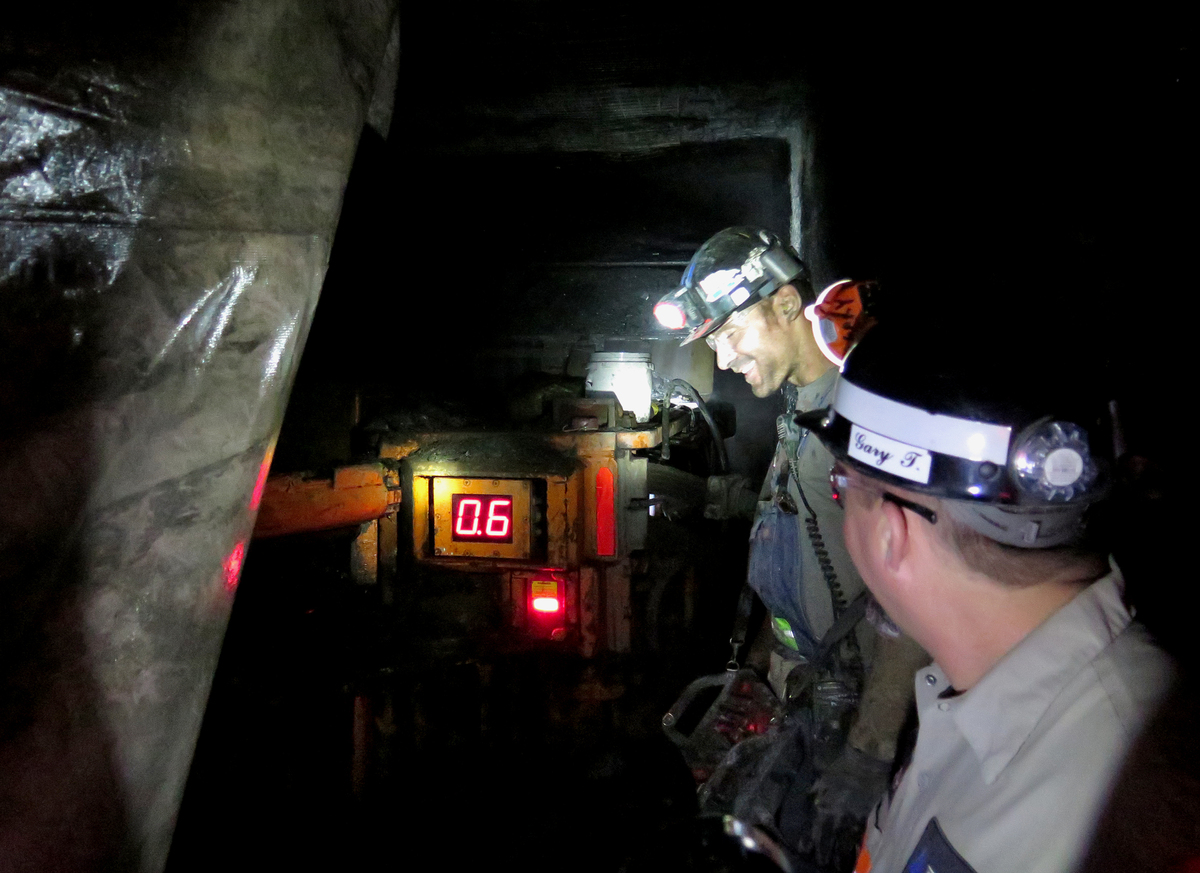 Mine supervisor Gary Thweatt (right) stands with miner Barry McDyer as he operates a continuous miner.

And if conditions are sometimes hard, many miners are accustomed because their ancestors mined before them.

We had dinner at the home of a coal-mining family. The family patriarch and matriarch are Dan and Mary Harris, both in their 80s.

Until he retired, Dan was a coal miner, like his father, and his father before that.

"He's a workaholic," Mary said of her husband. Dan described absurdly long days, entering the mine about 1:30 in the afternoon and continuing until the next morning, "about 9:30 when they run me out."

Their daughter Zeean was married for a time to a coal miner. 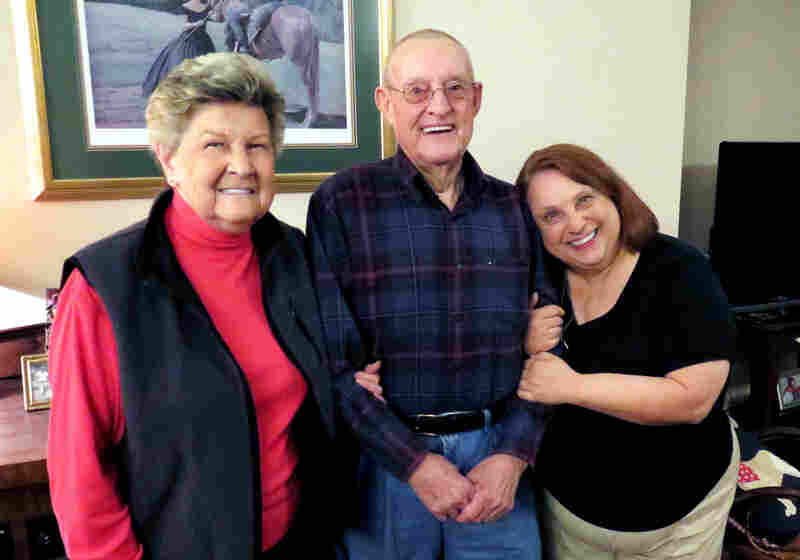 Mary Harris (from left) and her husband, Dan, along with their daughter Zeean Bumpus. Dan, his father, his grandfather, his former son-in-law and his grandson have all been coal miners. Steve Inskeep/NPR hide caption

Zeean's son initially went to college instead of the mines. "He stayed two days," Zeean said. Then he came home. Within a few months after that, he was mining coal.

Webster County residents know fossil fuels are linked to climate change. Many do not deny the science — "I know we're not helping," one miner said. But people do minimize coal's role, and play up the industry's importance. We saw a bumper sticker reading: "If you don't like coal, don't use electricity."

It has been a winning argument, until now.

"For the first time in my career, I've actually questioned if I'll be able to retire from coal in 20 years from now," said Heath Lovell of Alliance Coal, who met us at Webster County's last mine. "Depending on what happens in November with the presidential election, I think that will go a long way to determining what does coal's future look like in the next 10, 15, 20 years."

In a December interview with NPR, the president said he understands why people think he's waging war on coal. But he argued the industry's real problem is competition. Surging natural gas production drove down energy prices. That is indeed part of Webster County's story. Nearby power plants are switching from coal to gas.

Having lost his job, miner Joe Moore is philosophical about President Obama, who got Moore's vote in the first election, but not in the second.

Moore is following this year's campaign. He's interested in Democrat Bernie Sanders, and in Republican Ted Cruz. Each is cultivating blue-collar voters.

Meanwhile, Moore has to work out his future.

"After 39 years of steady going I think I'm going to take a minute and figure some things out," he said.

He does have options. His termination came with an offer of assistance if he returns to school. Then again, he might try for a job in a mine that's still open. It's not easy to let go of coal.