Accessibility links
Kim Davis To Attend Obama's State Of The Union Address The Rowan County, Ky., clerk who went to jail for refusing to issue same-sex-marriage licenses will be in attendance. She apparently got a ticket through Ohio Rep. Jim Jordan's office.

Kim Davis To Attend Obama's State Of The Union Address

Kim Davis To Attend Obama's State Of The Union Address 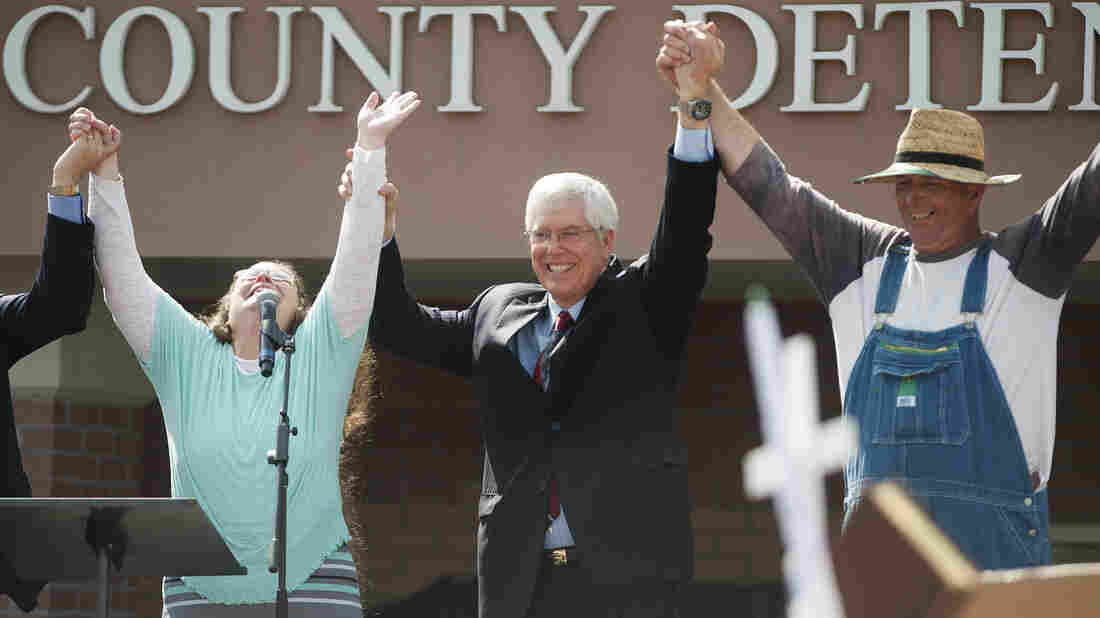 Kim Davis (left) holds her hands in the air with attorney Mat Staver (center) and her husband, Joe Davis, after she was released from jail. She was jailed for her refusal to grant same-sex-marriage licenses. Ty Wright/Getty Images hide caption 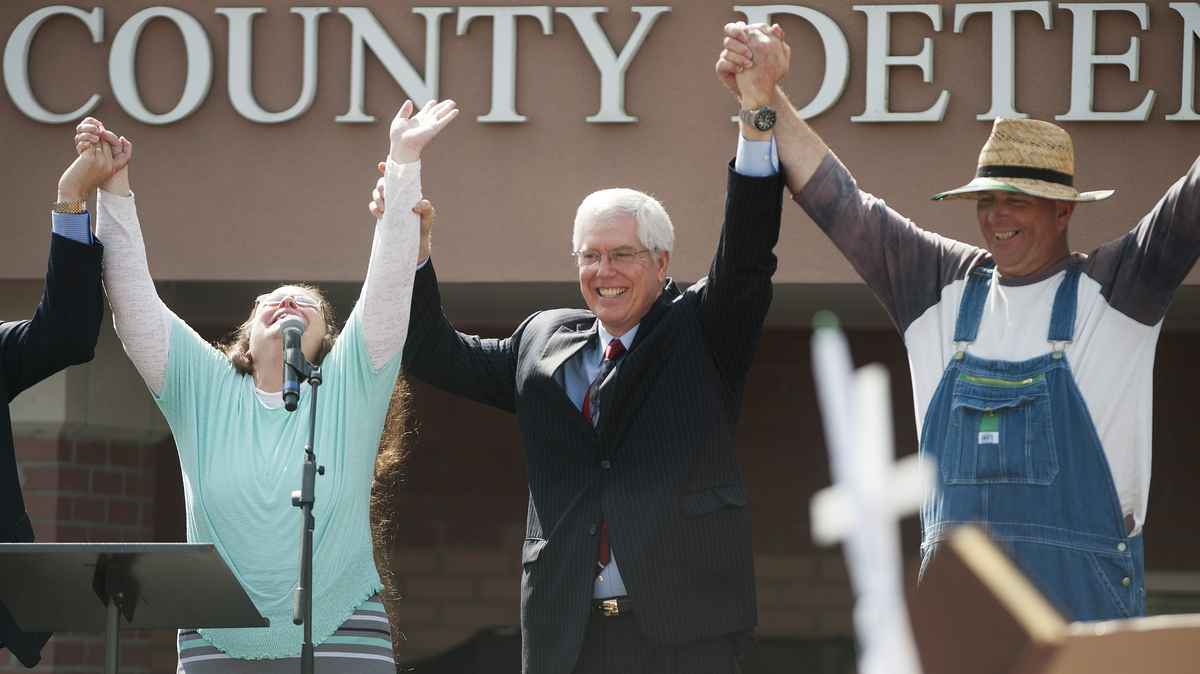 Kim Davis (left) holds her hands in the air with attorney Mat Staver (center) and her husband, Joe Davis, after she was released from jail. She was jailed for her refusal to grant same-sex-marriage licenses.

The Kentucky county clerk who went to jail over her refusal to issue marriage licenses to same-sex couples will attend President Obama's State of the Union address Tuesday night, a group supporting her announced.

"While the President will be extolling his 'accomplishments' of the last seven years, Kim Davis and Mat Staver will be a visible reminder of the Administration's attack on religious liberty and an encouragement for people of faith to stand," the Liberty Counsel wrote in a press release. Staver is Davis' attorney and the founder of the group.

"For seven years, people of faith have been in the crosshairs of the Obama Administration. The state of religious liberty is dire, but we cannot give up."

Also in attendance, as a guest of first lady Michelle Obama, will be Jim Obergefell, the plaintiff whose name appears on the landmark U.S. Supreme Court case that declared same-sex marriage legal in June of last year.

Davis went to jail for five days in September, held in contempt for defying court orders to issues same-sex-marriage licenses.

Just Before Big Rally, Kim Davis Is Released From Jail

Davis' release was met with a rally of supporters that included Republican presidential candidates Ted Cruz of Texas and Mike Huckabee of Arkansas. Both have been angling for the support of the religious right.

A spokeswoman for the Liberty Counsel said it would not say which member of Congress invited Davis. "No, we are not releasing that information," Charla Bansley told NPR.

She noted, "The focus we want to be on is why Kim is there, and Kim is there because she is standing for the many Americans who have not benefited under President Obama's seven years, and specifically had their religious liberty trampled."

"Kim Davis used our ticket," Jordan said. "Our staff heard from the Family Research Council that Ms. Davis and her family hoped to attend the State of the Union address and so we offered a ticket."

Jordan is the chairman of the House Freedom Caucus.