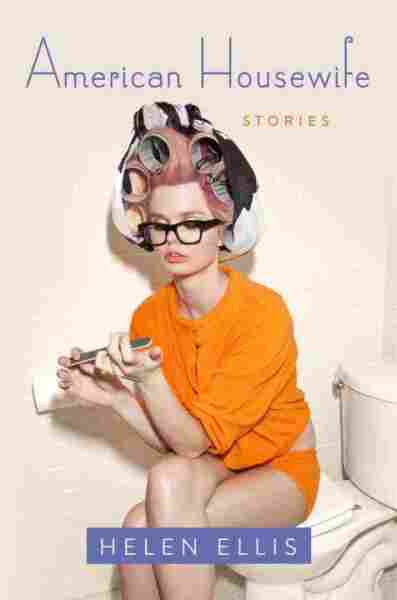 Too bad there are more than 340 shopping days till Christmas, because if it were just around the corner, I'd be urging you to buy Helen Ellis' off-the-wall stories for anyone on your list who loves satirical humor as twisted as screw-top bottles — and more effervescent than the stuff that pours out of them. Since it's January, let me just assure you that American Housewife is a better cure for winter blahs than hot chocolate, Ellis' hyper-housewife's "gateway drug to reading."

The opening story captures her frisky, subversive take on domesticity from its first line: "Inspired by Beyoncé, I stallion-walk to the toaster." If you're going to string together one-liners and call it a story, they'd better be good. Ellis' are outrageously good. Begun as a series of tweets, "What I Do All Day" is a three-page tour de force, boasting as many dazzlers as a wealthy Upper East Side matron's jewelry box. Preparing for a party, Ellis' germophobic, glitter-happy, modern-day Mrs. Dalloway detonates with "grocery aisle rage," "fist-bump[s] the credit card signature pad" and "scream[s] obscenities at an automated call." This slightly demented Susie Homemaker attacks food prep with a fusillade of active — make that violent — verbs: "I shred cheese. I berate a pickle jar. I pump the salad spinner like a CPR dummy. I strangle defrosted spinach ... I casserole. I pinwheel. I toothpick. I bacon." But here's the thing: Amid the furious activity, Ellis works her story to a touching punchline you never saw coming. This is shock and awww writing.

It's also this transplanted Alabaman in a nutshell — sweetness with an edge, like yams mashed with bitter greens. Her deranged housewives channel singer Nellie McKay's feminist twists on Doris Day and Flannery O'Connor's Southern Gothic predilection for the grotesque. These ladies wear lipstick, starched skirts, cardigans, and beige cotton undies "with a waistband as thick and wide as a ruler," but don't be fooled: They wield sharp elbows and sharper knives.

Ellis is a master of the unhinged monologue, delivered by narrators whose conventional, seemingly benign, honeyed patter gradually reveals the disturbing demon within.

"Being a wife is a commitment," declares the murderously devoted stay-at-home helpmeet who maintains the pristine apartment she and her husband have inherited from his control-freak mother. "When my husband's at work I don't get lonely. I have plenty to do. There's the dusting," she deadpans.

Ellis is a master of the unhinged monologue, delivered by narrators whose conventional, seemingly benign, honeyed patter gradually reveals the disturbing demon within. Whether it's a woman who traffics in underage beauty pageant contestants, the escalating vitriol in an email exchange between neighbors over their shared vestibule, or a book club maven who introduces the group's newest member to its creepy raison d'être, voice is key. With its hilarious, pokerfaced mix of inane instructions and increasingly alarming revelations, "Hello! Welcome to Book Club" does for reading groups what Daniel Orozco's "Orientation" did for office culture.

Although several stories are little more than short riffs, even slight pieces like "Take it From Cats" or "Southern Lady Code" serve as palate fresheners between the richer fare. Among these are "The Fitter," which moves from peculiar to poignant. It's the sad story of a woman married to one of the most coveted men in their small Georgia town — a genius at finding the right bra for every woman. Ellis has a way with the accouterments of womanhood: She describes the perfect bra as giving you "the confidence of a homecoming queen. It's a tiara for your ta-tas."

It's been 15 years since Ellis' first novel, Eating the Cheshire Cat, was published, and several of her narrators are frustrated, blocked writers. Few authors have written so openly about how demoralizing it is to suffer repeated rejections of their work. In one playfully bitter story, a desperate, blocked writer signs a contract for Tampax to sponsor her next novel, but fails to read the terms carefully. In "Dumpster Diving With the Stars," another desperate novelist tries to jump-start her career by foraging for treasures on a reality show with celebrities — which skewers the absurdity of what is and isn't valued in our culture. She confides: "Problem is: my last three novels lie dead in a drawer. I'm 45. Maybe it's not too late to find something else that I'm good at."

Ellis is so good at poker she plays on the national tournament circuit and was featured in Colson Whitehead's book, The Noble Hustle. But after American Housewife, I don't think she'll be needing another career.