Accessibility links
The Ted Cruz Goldman Sachs Loan, Explained Here are four ways to understand the controversy that the Texas senator finds himself in after it was revealed that his Senate campaign did not disclose a loan from the Wall Street investment giant. 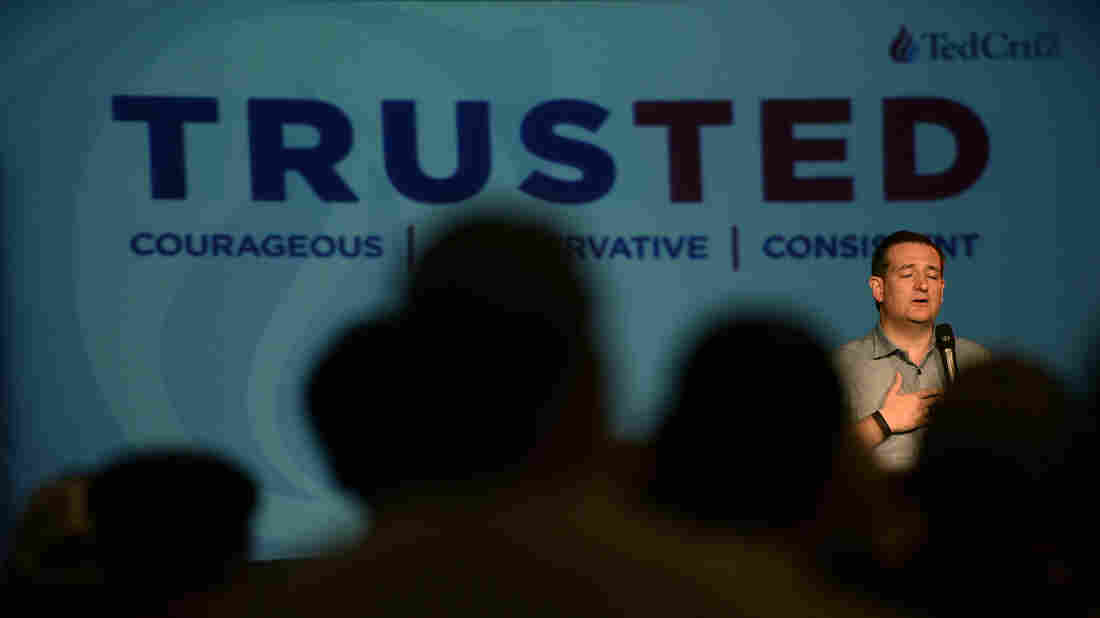 Texas Sen. Ted Cruz has made the case that he is the consistent conservative in the presidential race, but he is fending off questions about a loan from a major Wall Street firm his wife worked for. Mark Zaleski/AP hide caption 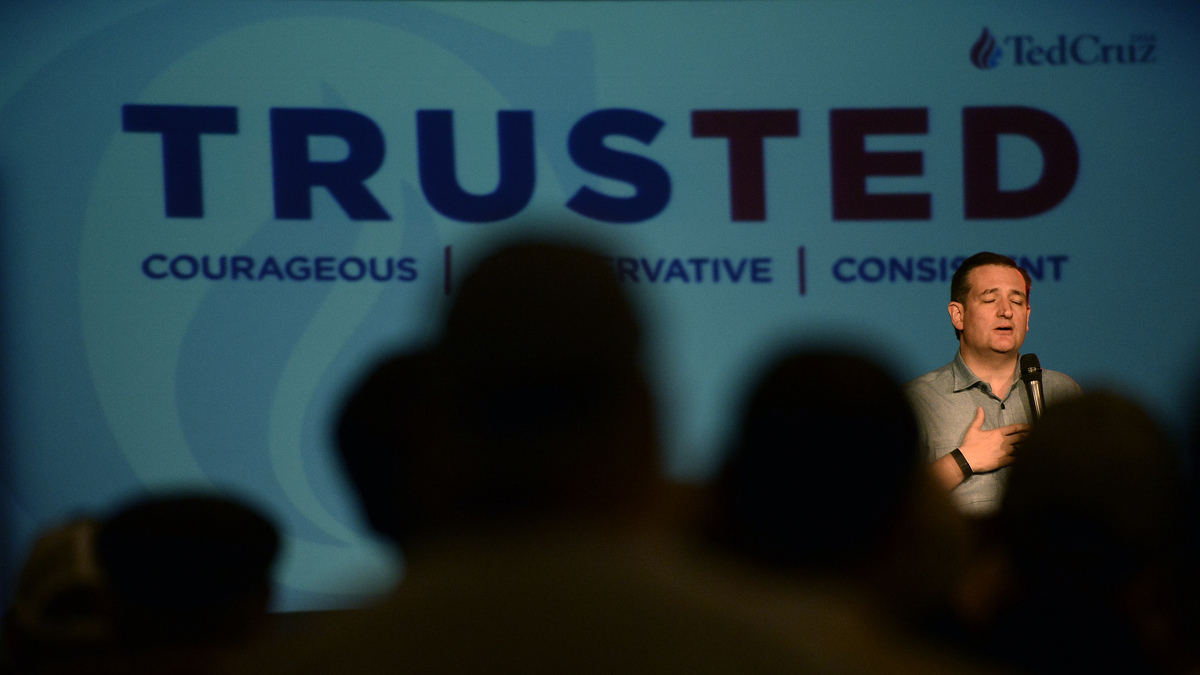 Texas Sen. Ted Cruz has made the case that he is the consistent conservative in the presidential race, but he is fending off questions about a loan from a major Wall Street firm his wife worked for.

Update at at 6:30 p.m. ET on Friday: Sen. Ted Cruz gave the Federal Election Commission an accounting of his campaign loans Thursday evening. The Cruz for Senate treasurer acknowledged in a letter that Cruz's loans to the campaign were underwritten by a margin loan from Goldman Sachs, where his wife is a managing director, and a line of credit from Citibank. The letter repeated Cruz's contention that the campaign loans were "personal loans from Senator Ted Cruz." It termed the Goldman and Citi funds "underlying loans." The letter was "to supplement the public record," it said. It did not include an FEC form to disclose "loans and lines of credit from lending institutions." That form requires details about guarantors, collateral and pledges, plus the signatures of the campaign treasurer and a representative of the lending institution.

Ted Cruz charged into national politics in 2012, when he burst from the Tea Party right to take down a Texas establishment Republican in a Senate primary. His underdog campaign benefited from $1.43 million in loans supplied by the candidate.

Cruz was trailing badly, when he told his wife he wanted "to liquidate our entire net worth, liquid net worth, and put it into the campaign," he noted to The New York Times in 2013. "What astonished me, then and now, was Heidi within 60 seconds said, 'Absolutely,' with no hesitation."

It now appears they didn't liquidate, but rather borrowed against their investments, with a margin loan from Goldman Sachs, where Heidi Cruz is a managing director. (She's on leave for the campaign.) They also took a line of credit from Citibank.

The story was broken by The New York Times a day before a pivotal Republican debate on Thursday and as Cruz finds himself the favorite in Iowa. The revelation has the potential to be damaging to Cruz, because it could undermine his Tea Party outsider, anti-Wall Street narrative and credentials. If nothing else, it reminds voters — or tells ones who didn't know — of his wife's association with the major Wall Street firm.

1. Cruz had a legal obligation to disclose the loans

There are two disclosure requirements. He complied with one, reporting both the Goldman Sachs and Citibank deals in his personal financial reports as a candidate and newly elected senator. The campaign paid zero interest, the documents say.

The personal financial disclosures also report Cruz's no-interest loans to the campaign. There's no connection made between the two sets of transactions. The disclosures also don't show any sell-off of the couple's financial investments.

Cruz's Senate campaign reported to the Federal Election Commission that Cruz made the loans; there's no mention of Goldman or Citi. This appears to be contrary to election law, which requires a candidate not only to report the amount, interest rate, terms and date but also to file the actual loan documents. That last is to thwart secret sweetheart deals.

2. Cruz says he didn't hide anything

The candidate told CNN's Dana Bash this morning, "Those loans have been disclosed over and over and over again on multiple filings. If it was the case that they were not filed exactly as the FEC requires, then we'll amend the filings."

In other words, no big deal.

Candidates often take out second mortgages on their homes, which appear in FEC filings as bank loans to the candidate to benefit the campaign. The Cruz Senate campaign didn't do this with the Goldman and Citi deals; it just reported personal loans from Cruz. The two scenarios may not be exactly parallel — or they could conceal problems.

Take joint ownership. Larry Noble, a former general counsel at the FEC, said that beyond the residence, a candidate usually cannot borrow against more than 50 percent of jointly owned assets. The spouse is restrained by the contribution limits; for Heidi Cruz in 2012, that would have been $5,000 total for the primary and general elections.

Presidential candidates John Kerry, D-Mass., and John McCain, R-Ariz., both married to wealthy women, ran into this situation. Questions like these are the reason loan documents themselves must be filed with the FEC, something the Cruz Senate campaign failed to do.

Finally, there's the Federal Election Commission's enforcement role. It might be expected to investigate a two-year lapse in disclosing loans exceeding $1 million. Cruz could divert the case into a negotiated "alternative dispute resolution."

Then again, if investigators want to dig into it, they would need permission from the six FEC commissioners. In any sort of big controversy, the commissioners usually split along party lines, which would shut down any inquiry.

4. The issues for Cruz aren't just legal — they're political

Cruz is deploying the "keep moving, nothing to see here" strategy. He told Bash, "All of the information has been public and transparent for many years. And that's the end of that."

But news of Cruz's financial relationships with Goldman and Citi runs head-on into his latest attack against rival Donald Trump: that the businessman "embodies New York values," while Cruz himself represents everyday American conservatives.

Goldman Sachs has always been a tender subject in the Cruz organization. He doesn't apologize for Heidi Cruz's job there, but he attacks Goldman and other Wall Street financial firms as "crony capitalists" with too much power in Washington.

The day after announcing for president, he told Bloomberg News, "Goldman is one of the biggest banks on Wall Street, and my criticism with Washington is they engage in crony capitalism. They give favors to Wall Street and big business, and that's why I've been an outspoken opponent of crony capitalism, taking on leaders in both parties."

If there turns out to be some impropriety in the loans, the Cruz campaign could be grievously wounded. Even without that, deals with Goldman Sachs and Citibank could blur the anti-establishment line Cruz has always drawn for himself.

But by mid-afternoon Thursday, Cruz was actually fundraising off the controversy.

A campaign email with his signature claimed media bias was to blame:

"The New York Times made the strategic decision to dictate the outcome of this election by launching an all-out assault on Heidi and me. I'm preparing to fight back like never before, but I cannot come up short if I am going to go up against The New York Times and win."