Accessibility links
Not My Job: Sutton Foster Gets Quizzed On Tonys (Not The Awards) Two-time Tony Award winner Sutton Foster is quizzed on Anthonys. 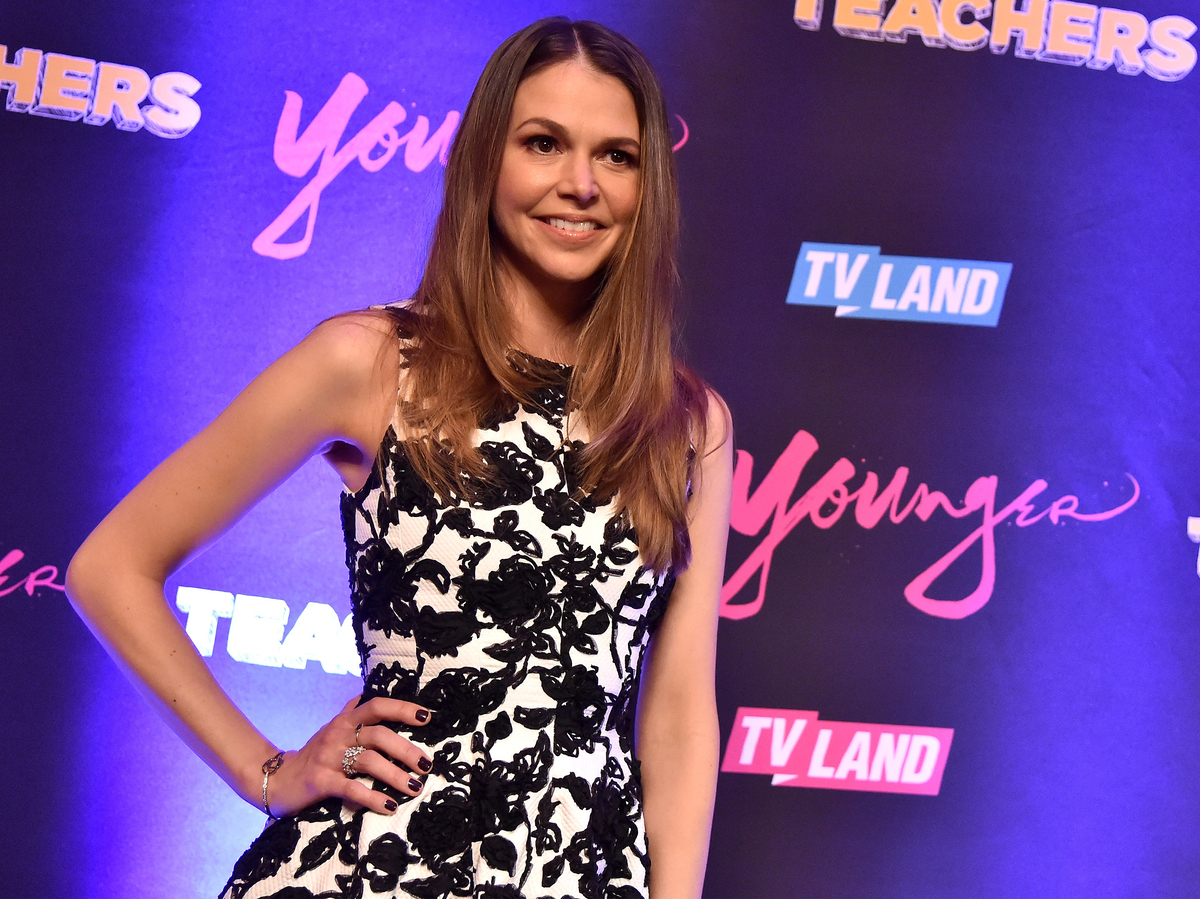 She can sing, she can dance, she can act. She can even handle her own on Wait Wait... Don't Tell Me!

Actress Sutton Foster, a two-time Tony Award winner, has been performing since she was a teenager when she first competed on Star Search. She has starred in musicals on Broadway and is now starring in the TV Land series Younger.

Since she is so familiar with the Tony Awards, we invited her to answer questions about other Tonys ... or Anthonys.

And now the game where we ask accomplished people to accomplish one more thing. It's called Not My Job. Actress Sutton Foster is what's known as a triple threat. In Sutton's case, this is a reference to her training as an assassin via knife, pistol or garrote. But she's also such a good dancer and singer and actor that the phrase has expanded to mostly refer to her theatrical prowess, though when she was a part real bad, the knife stuff comes in handy. Sutton Foster has won Tonys for "Thoroughly Modern Millie" and "Anything Goes." And now she stars in the TV Land series "Younger." Hello, Sutton Foster.

SUTTON FOSTER: Hi, how are you?

FOSTER: Thank you so much. I'm so excited.

PESCA: So triple threat - I was just thinking about the phrase. They use that to refer to a singer, dancer, actor. But it does sort of tell you a little bit about the state that musical theater holds in the American imagination that you are so threatening to them, you might entertain them against their will.

PESCA: So Sutton, were you the singingest (ph), tap-dancingest kid in Troy, to give candid tri-tri Mich.? Was that the kind of kid you were?

FOSTER: Yeah, I kind of - I was kind of obnoxious, yeah.

PESCA: One of those kids. You were on "Star Search," too?

FOSTER: I got - yeah, I got three and a half stars. I lost to a boy named Richard Blake, who sang a Whitney Houston song.

FOSTER: (Laughter) Richard is actually a very successful Broadway performer. But every time I see him, I give him squinty eyes.

GOLDTHWAIT: You should him the hairy eyeball. Do you guys talk about that...

PESCA: So did "Star Search" work? Because you started being a professional actress pretty early, right? You drop out of high school, you go on tour,

FOSTER: Yeah, I started working professionally when I was 17. I was on the first national tour of the Will Rogers Follies that traveled all around the country. And yeah, I grew up really fast.

PESCA: I also read that you were in college, but you dropped out to take a role. So my question is what grad school will you drop out of to get your next part?

FOSTER: (Laughter) Yeah, I mean, school is awesome and I'm a big fan of school. And...

PESCA: ...For other people.

FOSTER: (Laughter) For me, my path led me otherwise, so...

PESCA: Maybe for people who earn three or two and a half stars on "Star Search," school would work for them.

PESCA: And then on Broadway - so aside from the Tony Award-winning roles, you were in the musical version of "Young Frankenstein," "Shrek The Musical," the musical version of "Little Women." But I'm reading all - about all these movies that were made into musicals and I figure you're of an expert. So they just named the Oscars, do you think we're going to have musicals of "Spotlight" or "The Revenant?"

PESCA: That would be cool.

FOSTER: That'd be interesting, yeah, or on nice.

PESCA: It's amazing what they could get a bear to do these days.

PESCA: So on the new show, on the TV Land show, the premise is what?

FOSTER: I play a 40-year-old mom who has given up her career in publishing to raise her daughter. But now she's recently divorced and trying to get back into the workforce and is having trouble getting hired. And her best friend Maggie, played by Debi Mazar, convinces her that if you can't get hired as a 40-year-old, tell people you're 26. So she gets a job, and now is working at a publishing house that everyone believes she's in her 20s.

PESCA: So did you do field work? I mean, your co-stars, a lot of them are in their mid-20s. Did you pick up tips from them about what it is like to be in your mid-20s?

FOSTER: I'm learning a lot. And there's a lot of references in the script and things that I had no idea what they meant and - like IRL and YOLO and...

FOSTER: No, I don't know how to do that.

PESCA: Have you ever drunk tweeted?

FOSTER: Oh, I'm sure at some point.

GOLDTHWAIT: I have no patience. I'm 53. I can't stand people my age - how proud they are that they don't know how to operate an iPhone. I - it drives me - it really drives me mental. I don't know - just - then die, get out of the way.

ROCCA: It's time to make room.

GOLDTHWAIT: This is how we're doing things now, you know? You know, oh, my God. It's ridiculous.

GOLDTHWAIT: You know, they can't get on a plane. They're like (imitating whining).

PESCA: So from your experience, though, Sutton, I get the sense that being in the theater you're a little apart from age, per se. I mean, you start off young, and then you're on Broadway in your 20s. And then you stay in theater. I mean, I'm not asking have you not had a youth, but has aging be different for you, do you think, than a civilian?

FOSTER: I mean, I guess so in a weird way. I mean, I feel very grateful for my career thus far, and I - and in many ways, I feel like I have remained "young," quote, unquote, getting to play all these crazy characters and - I mean, I feel like I've lived many lives. I don't work at a desk, and - not that there's anything wrong with working at a desk. Desks are fantastic. But I...

GOLDTHWAIT: Yeah, I don't - you don't want to get the desk coalition all mad.

PESCA: Once Big Desk comes after you...

FOSTER: All the desk-hate tweets that are coming my way.

GOLDTHWAIT: Gosh, I would love to wrap these presents, but I don't have a desk.

PESCA: I guess sitting at a desk would be OK if you could still break into song and dance at the desk.

ROCCA: You could - she could tap dance while at a desk, I assure you.

FOSTER: ...They could have a tap-dancing desk.

PESCA: Do you ever tap dance on the show?

ROCCA: I wish we could hear you tap dance right now.

PESCA: Yeah, could you tap dance?

FOSTER: Is there a way we can hear you tap dance?

GOLDTHWAIT: Yeah, there are shoes involved. She doesn't have...

ROCCA: They're not soldered onto her feet.

GOLDTHWAIT: She's not a robot for God's sake.

PESCA: Otherwise, if she...

GOLDTHWAIT: Yeah, it would be like a cat knocking on the door.

PESCA: Tap dancing's like a superpower. I mean, you have it. It's in reserve. But like the X-Men, you get persecuted for it and shunned by society.

PESCA: Yeah. All right, Sutton Foster, we have asked you here to play a game that we're calling...

PESCA: So you've won two Tony Awards, and we're going to ask you about other Tonys or Anthonys. Answer two of them correctly and you'll win our prize - Carl Kasell's voice hitting the notes on a listener's voicemail. Bill, who's Sutton Foster playing for?

PESCA: Are you ready to place, Sutton?

FOSTER: I am so ready.

PESCA: All right, here's your first question. Tony "The Ant" Spilotro, upon who Joe Pesci's character in "Casino" was based, got his nickname, The Ant, because it's short for Anthony, but also because A, he tunneled out of a prison, B, he had a sugar addiction, C, an FBI agent referred to him as that little pissant.

PESCA: It's just trying to figure it out from why someone would...

PESCA: You are correct - that is correct.

PESCA: Our next question - pathobiology professor Tony Goldberg discovered a new species of tic. Where did he discover it? A, mislabeled in a tic exhibit at the University of Wisconsin, B, inside his own nose, C, on Joe Pesci?

PESCA: You do, you really like the mislabeled one? Maybe closer to home...

PESCA: It was the nose. Tony Goldberg had been back from Uganda for only about a day when he felt this itch in his nose, and it was an adolescent tic. He knew it had been living in his nostril for several days. This is common in the pathobiology community.

ROBERTS: How do you know the age...

GOLDTHWAIT: It kept saying you're not the boss of me.

GOLDTHWAIT: You go yes, I am. I'm your host.

PESCA: I literally am the boss of you. If you stay in my nose, you're going to have to live by my rules. that the limit my rules.

ROCCA: My rules - man, this blows.

PESCA: ...B, something called no day - the year every quadrennial when there is no Winter Olympics, no Summer Olympics, no Men or Women's World Cup and no presidential election, or C, every four years they celebrate and remember the time Joe Pesci visited in 1993.

PESCA: It is leap day.

PESCA: And Joe Pesci was the red herring. Bill, why don't we give the score?

KURTIS: Not many people do this, she wins that third Tony. All three right, Sutton.

PESCA: Sutton Foster is a two-time Tony Award-winner. And her new series "Younger" has just started its second season on TV Land. We now add trivia genius to establish her as a quadruple threat. Thank you so much, Sutton, for joining us.

FOSTER: Thank you guys so much.

PESCA: In just a minute, we go all-out for burritos in our Listener Limerick Challenge. Call 1-888-WAIT-WAIT to join us on the air. We'll be back in a minute with more of WAIT WAIT… DON'T TELL ME from NPR.

KURTIS: Support for NPR comes from NPR stations and CarMax, a nationwide retailer of used vehicles, where people can buy or sell their car. Offering written vehicle appraisals good for seven days. Learn more at carmax.com. Carmax - the bright side of car buying. The Lemelson Foundation, committing to improving lives through invention in the U.S. and in developing countries, working to inspire and enable the next generation of inventors. More information is available at lemelson.org. And Progressive Insurance, with insurance for cars, home, boat, motorcycles, RVs and commercial vehicles at 1-800-PROGRESSIVE and progressive.com.