Accessibility links
Unlikely Advocates Push To Give 16-Year-Olds A Vote — And A Voice Washington, D.C., residents pushing to enfranchise teens think their opinions matter and the move would boost voter participation. But some worry 16-year-olds aren't ready to cast ballots. 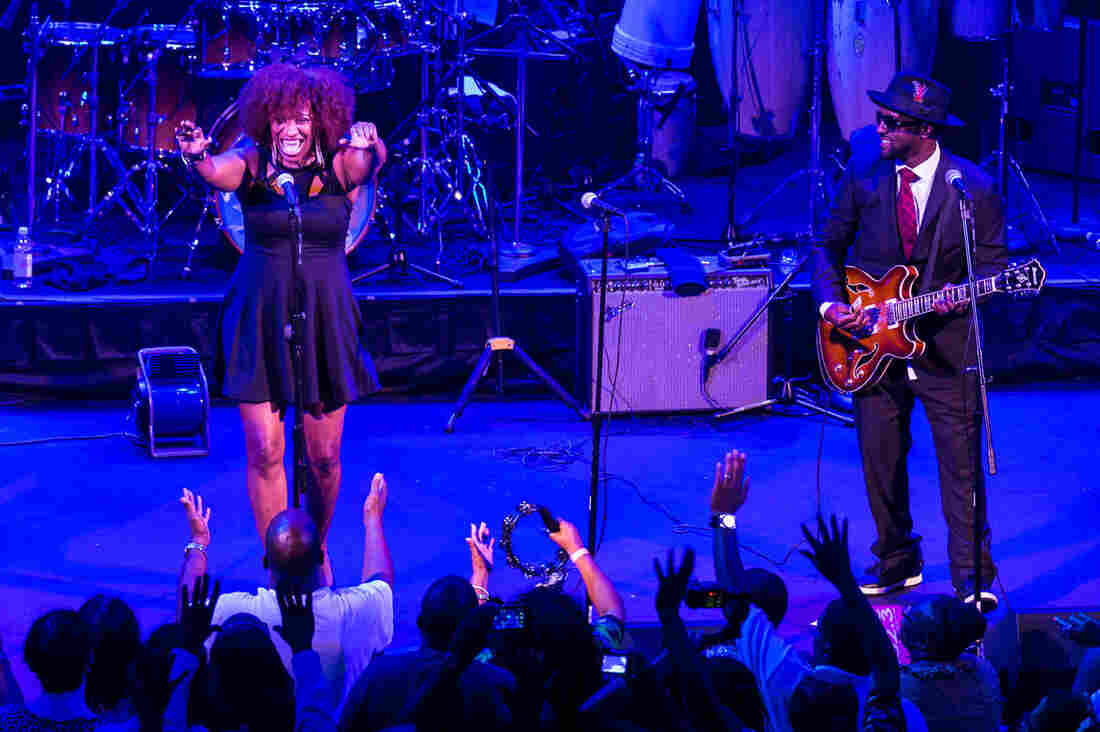 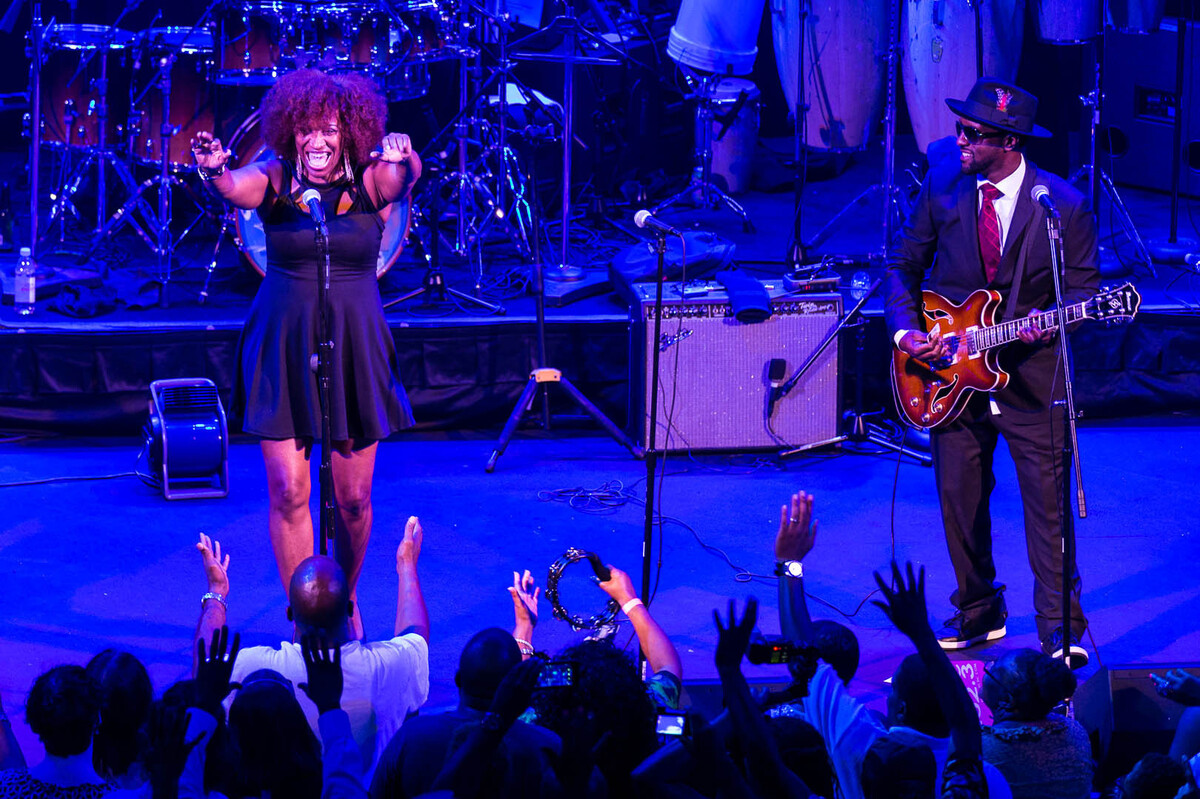 Singer Michelle Blackwell is helping lead the effort to enfranchise teenagers in the nation's capital. She and guitarist Frank "Scooby" Marshall of the The Chuck Brown All-Star Go-Go Band play a concert at Washington, D.C.'s Howard Theatre.

Turning 16 is considered a milestone. In many states, it means being able to drive, pay taxes and work like an adult. In Washington, D.C., 16-year-olds could soon take on another responsibility: the right to vote in a presidential election.

Michelle Blackwell is helping lead the effort to enfranchise teenagers in the nation's capital. But she's not your typical Washington politico. In D.C., the 44-year-old is better known as one of the top go-go singers around.

"Go-go is one of the indigenous genres of music — born right in this city," says Blackwell of the percussive brand of funk music that originated in Washington in the late 1960s.

But off stage, she's now helping lead the effort to make D.C. the first jurisdiction to let 16-year-olds vote in federal elections.

"A lot of young people feel very powerless and they don't feel that their voice matters," Blackwell says, "and that's part of the reason why there might be this absence of young participation as adults."

In the 2014 elections, voter turnout among people under age 30 hit its lowest level in 40 years, according to the Center for Information and Research on Learning and Engagement.

Blackwell believes by lowering the voting age to 16 — when young people are still in school and before they leave for college or the military — more of them will pick up the voting habit.

After a deadly shooting in D.C., she went to a community meeting. It was then that she realized 16-year-olds should have a voice in political debates.

"When it came time for young people to speak, they actually had some really great ideas and some concerns that I felt were being dismissed," she says. "And at one point, one of the adults even took the microphone from one of the young people and started lecturing them."

That night Blackwell started researching the issue of 16-year-olds voting and within weeks, she was working with city lawmakers on a bill. D.C. Council member Charles Allen, the bill's author, says the 26th Amendment, which lowered the federal voting age to 18, doesn't prohibit 16-year-olds from voting — it simply states you can't deny anyone over the age of 18 from voting.

Law experts agree: "If a state wants to enfranchise 16-year-olds, it has the power to do so," says Stanford Law professor Nate Persily.

Cole Sebastian, a 16-year-old high school student who voted in last year's elections, called it a rite of passage.

"Voting is always considered as this adult thing, that only adults can do," he says. "And so I think people at my age, and me especially, are just more excited to grow up."

Sebastian is a strong supporter of lowering the voting age and wrote an op-ed in his high school newspaper.

"It's not just about having young people vote," says Sebastian. "It's about creating a new generation of lifelong voters."

And the adults could probably learn from the 16-year-olds, who voted at twice the rate as everyone else in last year's Takoma Park election, according to city officials.

Still, there are critics of a lower voting age. Some say 16-year-olds just aren't ready. That's why, for example, you have to be 18 to join the military or buy that Powerball ticket.

"I'm not against 16-year-olds voting," says Daniel Okonkwo, head of D.C. Lawyers For Youth. But he worries that opening up the ballot box to 16-year-olds could also make it easier for prosecutors to charge them as adults in court.

"There are often cries for 'Well, we have young people doing adult crimes, they should do adult time,' " says Okonkwo. "And so if we're going to give teenagers, give children more adult responsibilities, I think it's a necessary to build in somehow some safeguards."

The D.C. bill enfranchising 16-year-olds was introduced in November but it hasn't come up for a vote yet. In a city government dominated by Democrats, Michelle Blackwell says the measure wouldn't change the political balance.

"It's just really more about giving the young people representation because they have no real lobby," she says.

Until that happens, this unlikely lobbyist will continue pressing her case — both on and off the stage.