Accessibility links
Gun Stocks Up, But Activists Move To Expand Anti-Investment Push Instead of pushing for new gun laws, anti-gun activists want supporters to pull big gun retailers like Wal-Mart from their investment portfolios. But experts say it might not be effective. 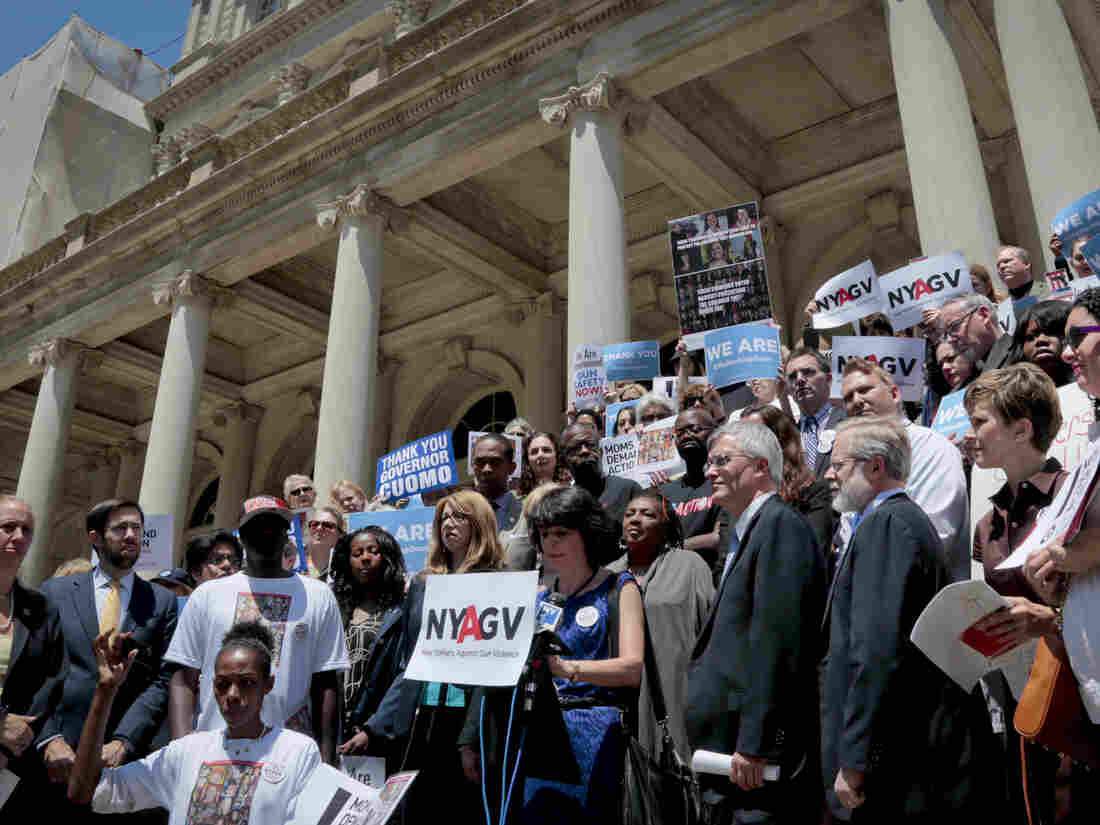 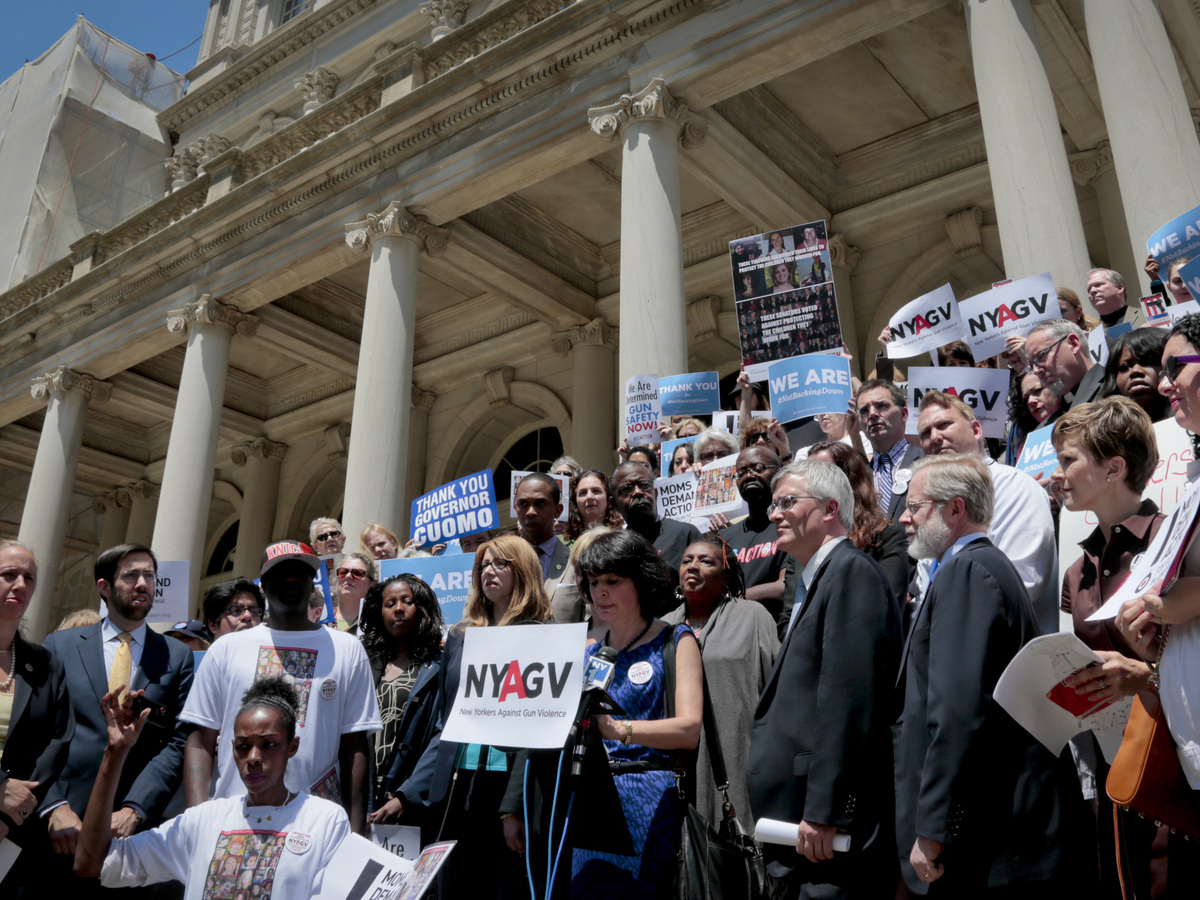 Anti-gun groups and state officials joined New Yorkers Against Gun Violence to mark the sixth month anniversary of the Newtown massacre on the steps of New York City Hall in 2013.

After years of trying and failing to push new laws through Congress, gun control advocates are targeting American firearms makers from a different angle.

"The only thing they really understand is money," says Leah Gunn Barrett, executive director of the nonprofit New Yorkers Against Gun Violence. She's also part of a coalition called the Campaign to Unload, which encourages investors large and small to divest from owning stock in companies that make guns and ammunition.

Investors, Retailers Shy Away From Guns; Will It Last?

"You may not even know that your 401(k) has gun stocks in it," Barrett says. "So asking the question is very, very important. Not only for individuals, but for public pension funds...it's really raising the issue and making gun stocks toxic."

Gun control advocates have been pushing for years to get investors to divest from companies that make firearms and ammunition. Now officials in New York City want to widen that push to include retailers. But not everyone thinks their divestment campaign will succeed.

"If it's made to be punitive, it's not going to work," says Andrea James, a firearms industry analyst with Dougherty & Company. She says gun stocks have performed well because gun sales have been brisk.

"When the divestment happens," James says, "I don't think it really affects the underlying business, meaning the number of firearms they sell."

The divestment camp has claimed some victories after mass shootings in Connecticut and California. Big institutional investors like the California State Teachers' Retirement System (CalSTRS) and pension funds in New York and Philadelphia have dropped their holdings in gun companies.

But the stock price of those gun companies has not gone down. In fact, since the Sandy Hook shootings in 2012, the stock prices of Sturm, Ruger & Co. and Smith & Wesson have mostly gone up, even as big institutional investors have moved to sell.

"In a free and open market, other shareholders will come and take their place," James says. 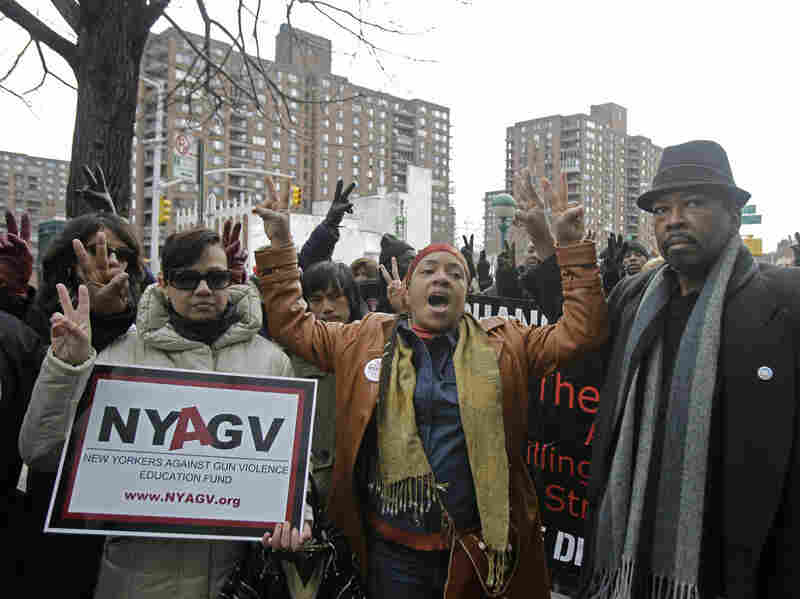 Members of New Yorkers Against Gun Violence and the National Action Network march against gun violence on the streets of New York in 2012. Kathy Willens/AP hide caption 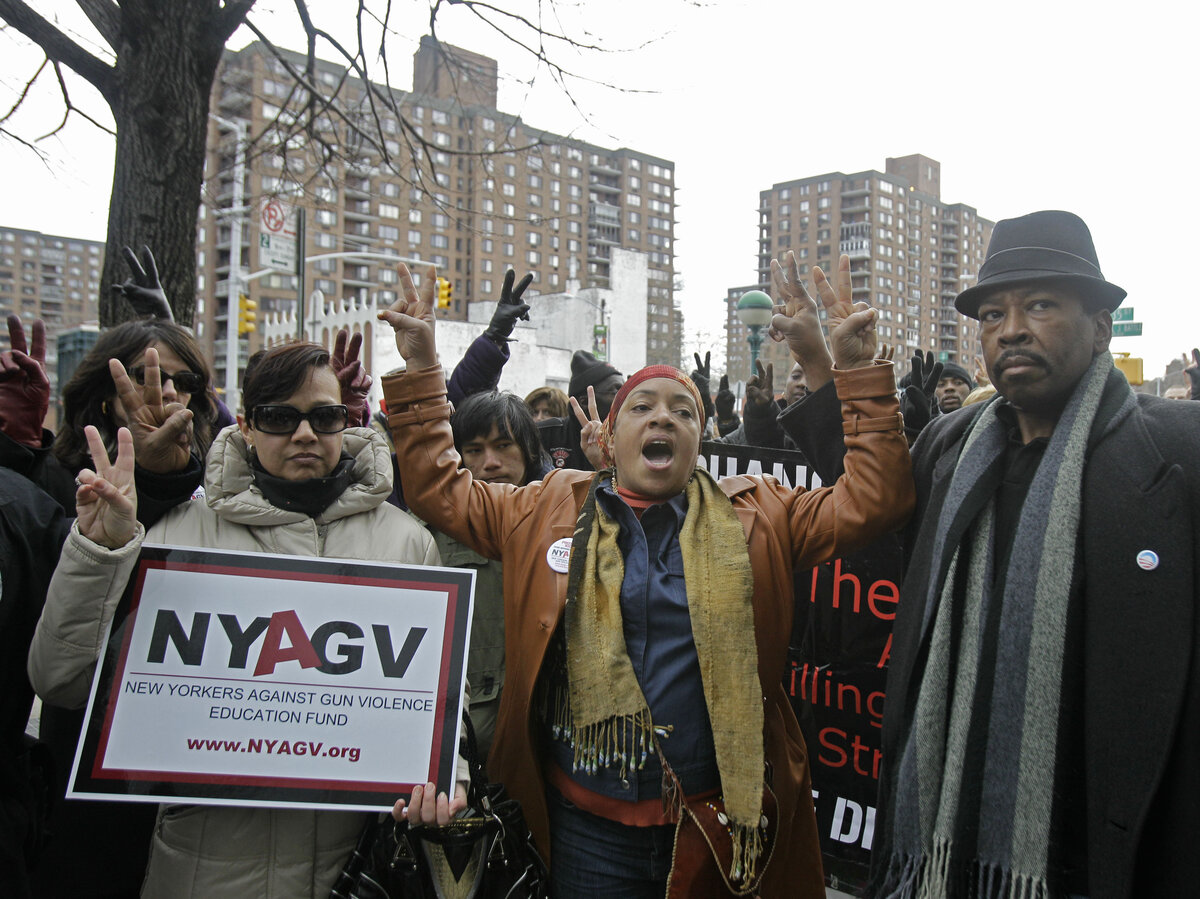 Members of New Yorkers Against Gun Violence and the National Action Network march against gun violence on the streets of New York in 2012.

This includes some investors who want to hold gun stocks as an expression of support for the Second Amendment.

Still, divestment supporters say this latest push is different because it's aiming beyond just the gun companies themselves. New York Public Advocate Letitia James is pushing the city's largest pension fund to divest from national retailers that sell firearms, including Wal-Mart, Dick's Sporting Goods and Cabela's.

"It really sends a strong moral message that public dollars should not be used to prop up an industry that has caused so much carnage on the streets of New York City and other urban centers across this nation," Letitia James says.

Letitia James and other divestment supporters point to the success of past campaigns against the tobacco and coal industries — especially the push to end the apartheid in South Africa. But even in that famous campaign, some economists question whether divestment had the kind of impact its supporters claim.

"Well, unfortunately, it does not have an effect," says Paul Wazzan, an economist at the Berkeley Research Group in California. He has studied the divestment campaigns against companies that did business in South Africa in the 1980s and 1990s. Wazzan says there was no measurable effect on their stock prices.

That kind of pressure is harder to measure than a stock price. But divestment supporters say it's still worth a try.